Warning that build platform is missing

It would be great if there was a warning signal or something letting you know that the build platform isn’t installed or not completely installed. Twice now I’ve started a print not realizing that my freshly cleaned build platform is sitting next to the printer and not in it. lol.
Seams like this could be an easy addition.

I would second this. I had an employee of mine (whom I am training on the machine) not put the platform in all the way secure. The print actually printed successfully even tho there was a 1-2 degree angle on platform itself. I almost stopped it mid way but decided to let it go as a test.

It doesn’t have any way of knowing if the build platform is attached, that would require an extra sensor so something like that couldn’t be done until they do a new printer.

I think it might already do that, or at least it has the message about making sure that the cap of the resin cartridge is open, even then I’m sure people would ignore warning messages after having spent a lot of time with the printer.

I was having serious Forum withdrawals…the login function of the forum was broken for a short while! Fixed now!

Yes upon printing there is an onscreen reminder to make sure the vent is open and platform is in place.

@Zachary_Brackin of course I did not mean to include this new functionality in the current printer. Maybe a new sensor for the Form2+ or 3!

And that on screen reminder is taking such a long time that you have plenty of time to check if it’s really installed.

Forgetting to insert it might be an indication of bad routine or rushing things. Learn yourself working according to a fixed routine.

What’s happening is, is that after each print I have to wipe the platform down with iso. Or my prints stick to much. So after wiping down, I set it aside to dry. That’s when I forget. It’s completely my fault, but it happens. Even if they can’t put it on this one, It would be a very good feature on there next gen. And not that hard to do.

I had mentioned earlier an employee I am training who put it on, but not all the way. This is how he inserted it: 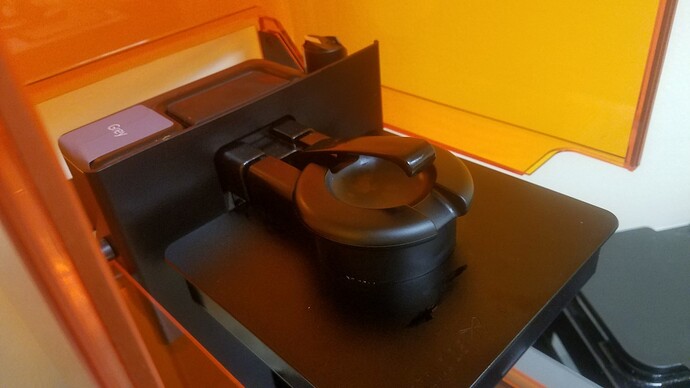