V4 Resin, Quality has declined drastically in the past month. Help?

Hello everyone, I’ve been having some issues… Hoping someone here has seen this before and can give me an answer while I continue to wait for Formlabs Support to get back to me, this was done using V4 Clear resin on a Standard Tank at 0.025 resolution: 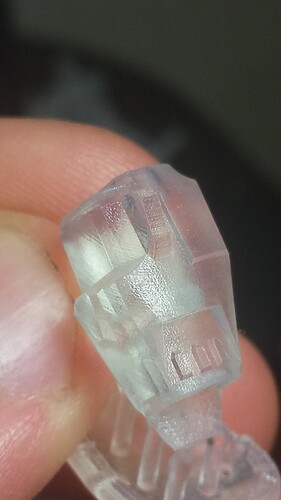 Instead of being smooth, the model looks like it was hit repeatedly with tiny, tiny mallets. My friend Michael suggested it was due chunks of cured resin being in the tank, so I cleaned it, filled it back up with V4 Clear (the cartridge is only a few weeks old), also cleaned the Optical Window and tried again with another model at 0.050: 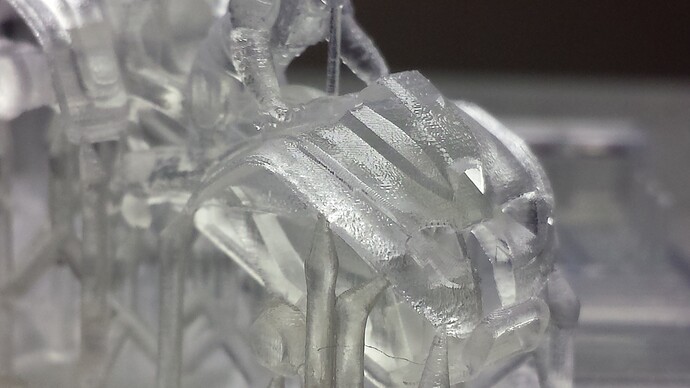 Same problem. I noticed a steady decline in quality last month, but I thought that it may have been due to the LT tank I was using. Read somewhere that the quality is lowered a bit on standard resins… But no dice. I emailed Support on Monday, and they suggested in addition to cleaning the tank and optical window, to try an clean the Main Mirror… This was what the .1 resolution optical test yielded: 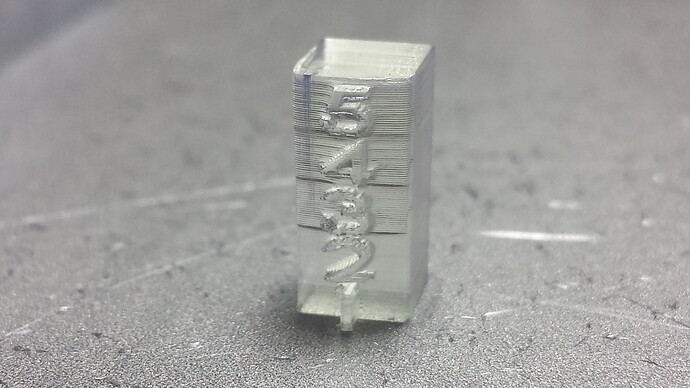 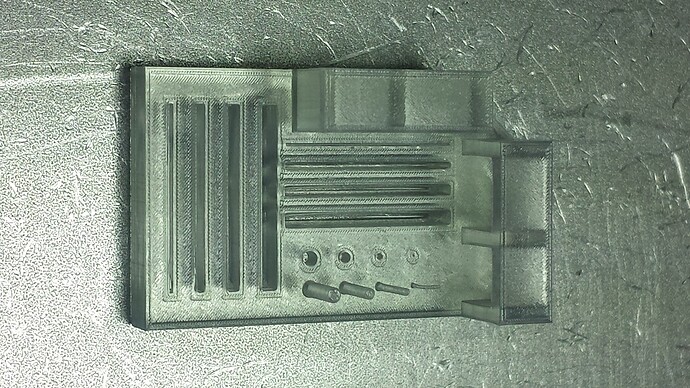 Because of the low resolution I’m not sure how conclusive that test was… The surface is gritty with bold lines, but that’s to be expected. The horizontal lines are also bad.

I was making these for a client, and they are CLEARLY not up to par, and are significantly worse in quality than what I was getting six months ago when I first had my Form 2. Now I’ve lost $25 in resin, and my brand new Standard Tank is half ruined. If cleaning doesn’t help, the problem has to be either a software or a hardware issue… I’d appreciate it if anyone who has dealt with this before could tell me how they fixed this mess.

Whenever I had sudden drops in quality the laser was generally the culprit.

You could still try to clear the galvo mirrors (Formlabs can give you instruction on how to do so), and the resin cartridge you got may have been contaminated. I’m not discarding that something else might be at play but it could still be an optical issue (contamination of something with the laser itself, these things a finicky) or a bad batch of resin.

I’m not used to looking at the optics test print in Clear but from what I have printed in Grey it looks like the text on the columns isn’t as sharp as what I was seeing in my testing. The centerpiece definitely looks fine though… Just my 2 cents.

Aside from cleaning the galvo I’d try a new batch of resin in a new tank with one of your own 3D model or a print which you have already done and which yielded good results… although I understand this may have a cost that you would not be willing to front.

I wouldn’t be against running more tests per se, but this Standard Tank, and the LT Tank I was using before are the only Tanks I have… I run a very modest small business with this thing, so spending $80 to order a new tank isn’t really an option right now.

As for cleaning the Galvos… I barely felt confident replacing the Graphics Card on my desktop, which is pretty much the easiest thing one can do when it comes to working on hardware… But this? Working on the most fragile component in the most expensive piece of equipment in my house? That would be a very difficult thing for me to do.

if you gonna run a piece of equipment that requires maintenance, and you can’t afford to pay high prices for repair staff… then you might want to invest time in getting comfortable with doing maintenance yourself.

Sooner or later- you’re gonna have a spill to clean. Or some other part to replace.

But definitely talk to Formlabs- if the unit is still under warrantee… they may have you ship it back for repair.

I agree with that, but it isn’t a long term solution… For example, if the laser died, that isn’t really something I could fix.

Luckily it is under warranty until March 2019, but… I’m beginning to wonder if my Form 2 isn’t going to be a long lasting investment…

Luckily it is under warranty until March 2019, but… I’m beginning to wonder if my Form 2 isn’t going to be a long lasting investment…

It can be but it’s not a certainty. Extreme reliability and/or accountability is what you get when you buy a much more expensive albeit similarly capable printer from older/bigger brands like 3DSystems or Stratasys. Formlabs is a small business as well.

As for the Galvo, it’s really no big deal as long as you are gentle with the components. Formlabs’ documentation is thorough and well done, their printer almost fool-proof to disassemble and they are there to help you through it (it’s in their interest, it’s that or calling your printer back). Their method for cleaning and the tools they supply for it aren’t the absolute best way to clean the mirrors but it’s definitely one of the most fool-proof.

I agree with @Sculptingman that if you run a business which requires hardware to function, you have to either be able maintain it yourself or pay for the maintenance to be done. If you can’t do either of those things you’re at a big risk.

Have you tried a replacement resin cartridge?
This kinda looks like the UV blocker in the resin isn’t doing its thing.

Okay, tomorrow morning (weather permitting) I’m going to print another part at 25um, this time using an unopened cartridge of resin to see what happens. Formlabs Support got back to me about the pictures of the optical test, and said they looked pretty decent, actually, but that they did see what I meant by the horizontal lines.

I printed another vehicle body today, this one being after I’ve cleaned everything, and… It’s pretty much the same: 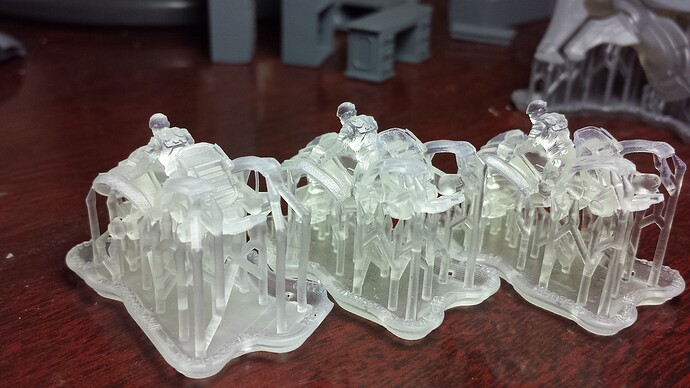 The two printed this month look about the same, but a few differences I noticed with the old print is that 1. The resin is more opaque, 2. The lines are less noticeable on the curves, and 3. The support base is clear, while the ones on more recent prints are foggy and dark in coloration? (That’s not just a shadow in that picture) 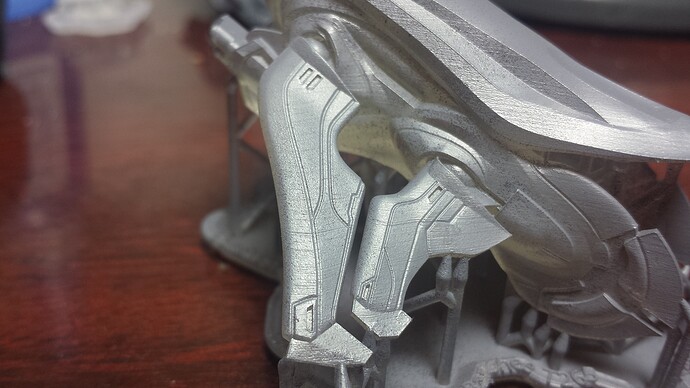 You know, between what Formlabs said, and what I’ve found with the three 50um vehicles, I’m beginning to second guess myself. Maybe these horizontal lines have always been a thing, and are simply an imperfection the machine makes regardless…

Do any of you guys encounter lines like these regularly? Horizontal lines that form perpendicular to the build plate?

Do any of you guys encounter lines like these regularly? Horizontal lines that form perpendicular to the build plate?

In your first post you mentioned " tiny, tiny mallets" which was indeed uncommon. This is why I answered with the suggestion of cleaning the optical path of the laser.

The horizontal lines however are absolutely part of the process and are unavoidable, there’s no question here. While I personally find that your image of the column (from the optical test) is a bit less crisp than what I would expect, the lines being visible is normal and the centerpiece of the print is about as perfect as it gets with all straight cut-outs and the smallest pin being resolved correctly.

Okay, I seem to have gotten things sorted out, now… The issues I ran into seemed to be threefold: 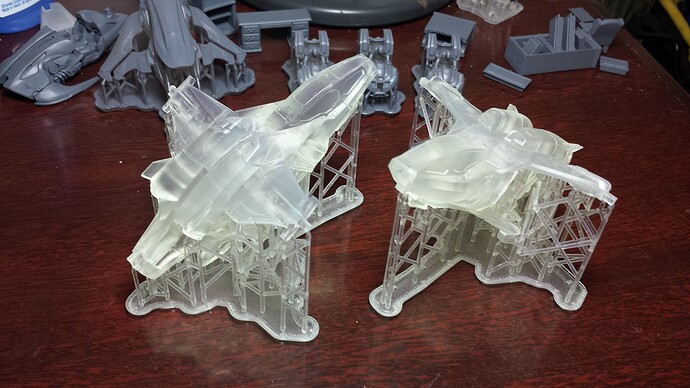 I think that the decline in quality was partially me seeing issues that weren’t there, live and learn, I suppose.

From the comparison photo to your old prints, I don’t see any quality differences, it simply looks like the new resin is more transparent and glossy which can make the surface texture stand out more.

Some stuff may be due to needing more supports for stability, to make sure it’s not flexing too much between each layer.

I don’t recommend trying to clean the galvo mirrors on the Form2, it’s design such that it really shouldn’t need to be dusted, plus if there was dust there you would get much bigger issues. The Form1/1+ had the issue with dust that requires it to be dusted about every 6 months, but that was something that they tried to address with the Form2. It’s not perfect, and it’s possible some dust got in there during manufacturing, but it’s unlikely.

Also, the resin doesn’t go bad from misuse, it’s good for a year, it’s just that if you don’t use it for a while then you need to stir it for a while before using it again, especially if the resin has pigment in it. As long as the resin is stored in a dry dark place then it’s fine.

I print at 50micron most of the time and those horizontal streaks are common on flat surfaces, I use a fine grit sandpaper and/or an abrasive rubber to smooth them out, the primer paint does the rest.