I know a lot of people are waiting with baited breath for their Form 3L, and I haven’t seen much feedback from users yet on the forums.

I got mine today - happy to take questions! No guarantees I’ll answer, but ask away. 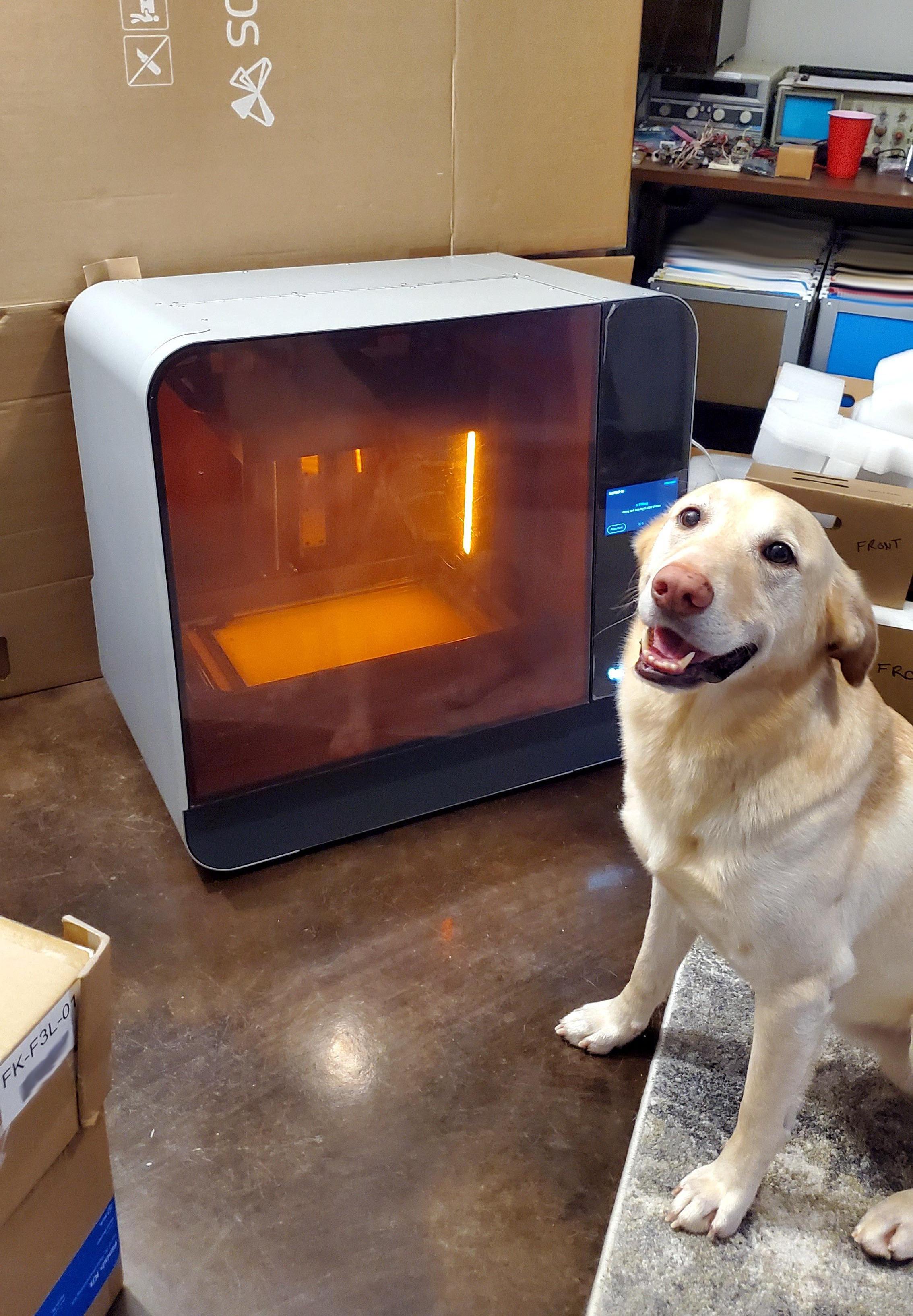 In the meantime, a brief “unboxing”…

It arrived on a pallet, in an otherwise-empty, 30ft+ long transport truck. It was shipped with DHL but got subcontracted out a couple times to other third party freight carriers before it found its way to me. (That vertical box laying against the stack is actually another DHL delivery for someone else here). 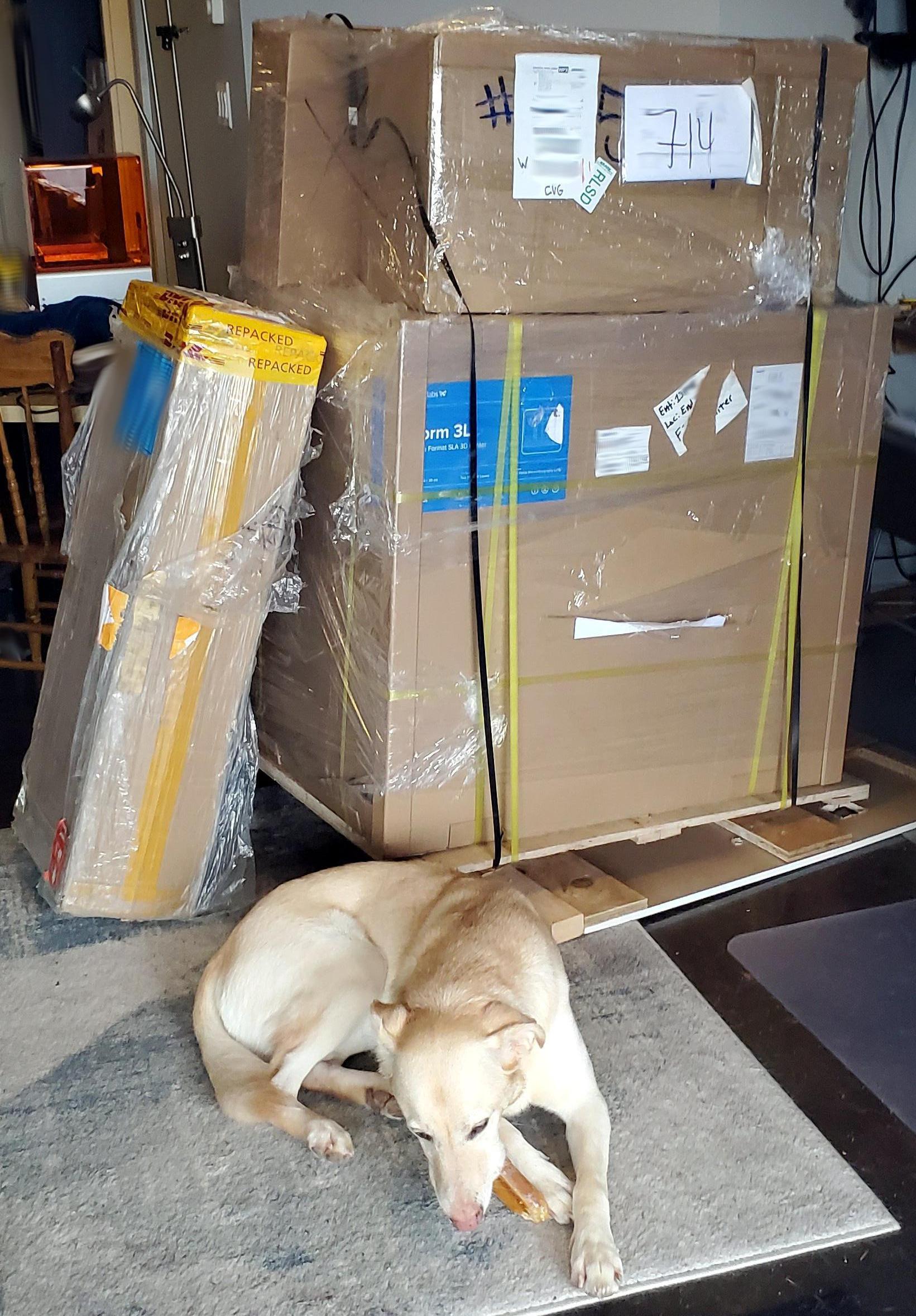 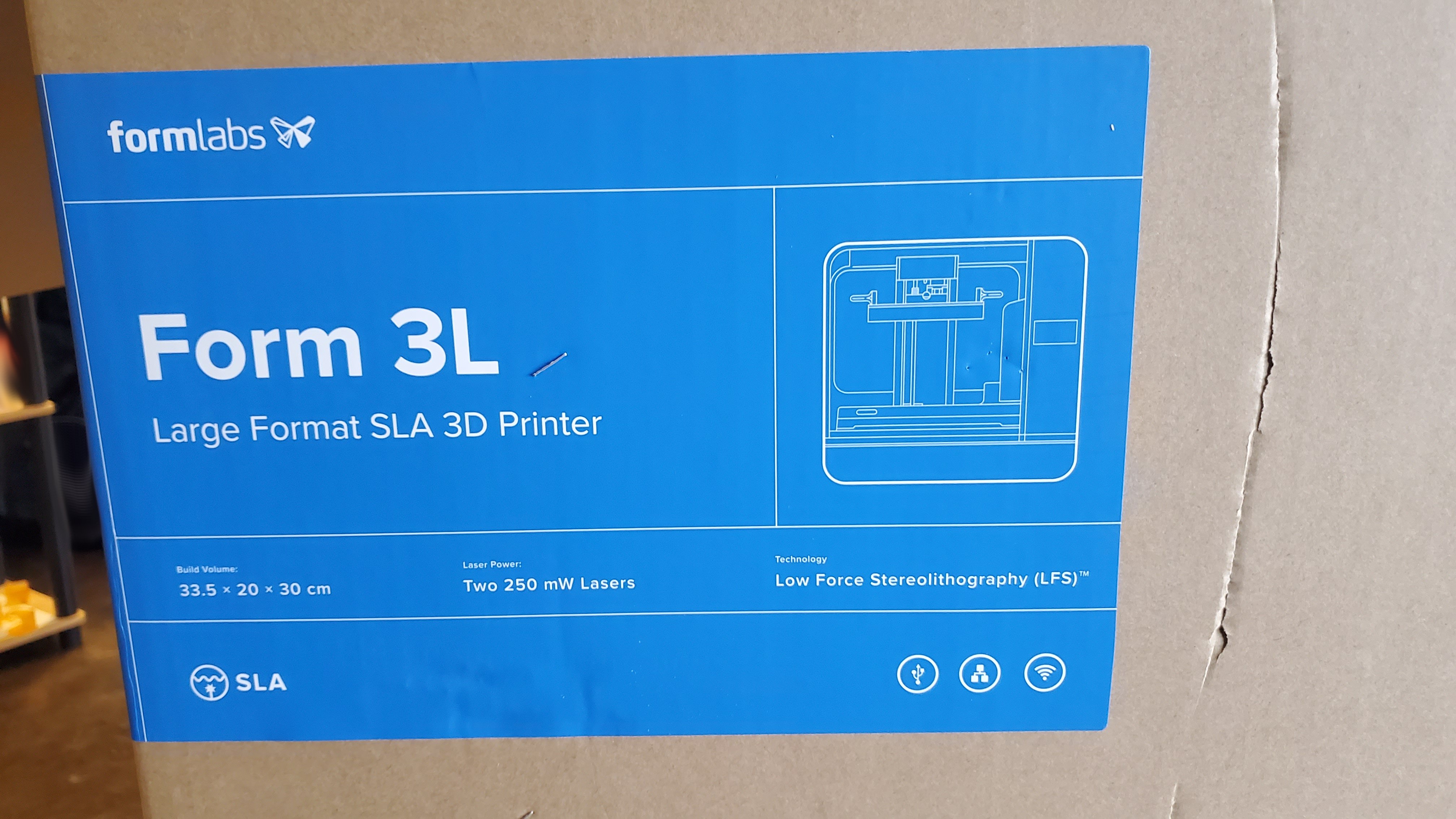 The stickers hint at some point it came from Asia, through Hong Kong, and through New York JFK. DHL tracking for the shipment shows it was picked up from Boston (guessing Formlabs does some local QA before sending out to customers). 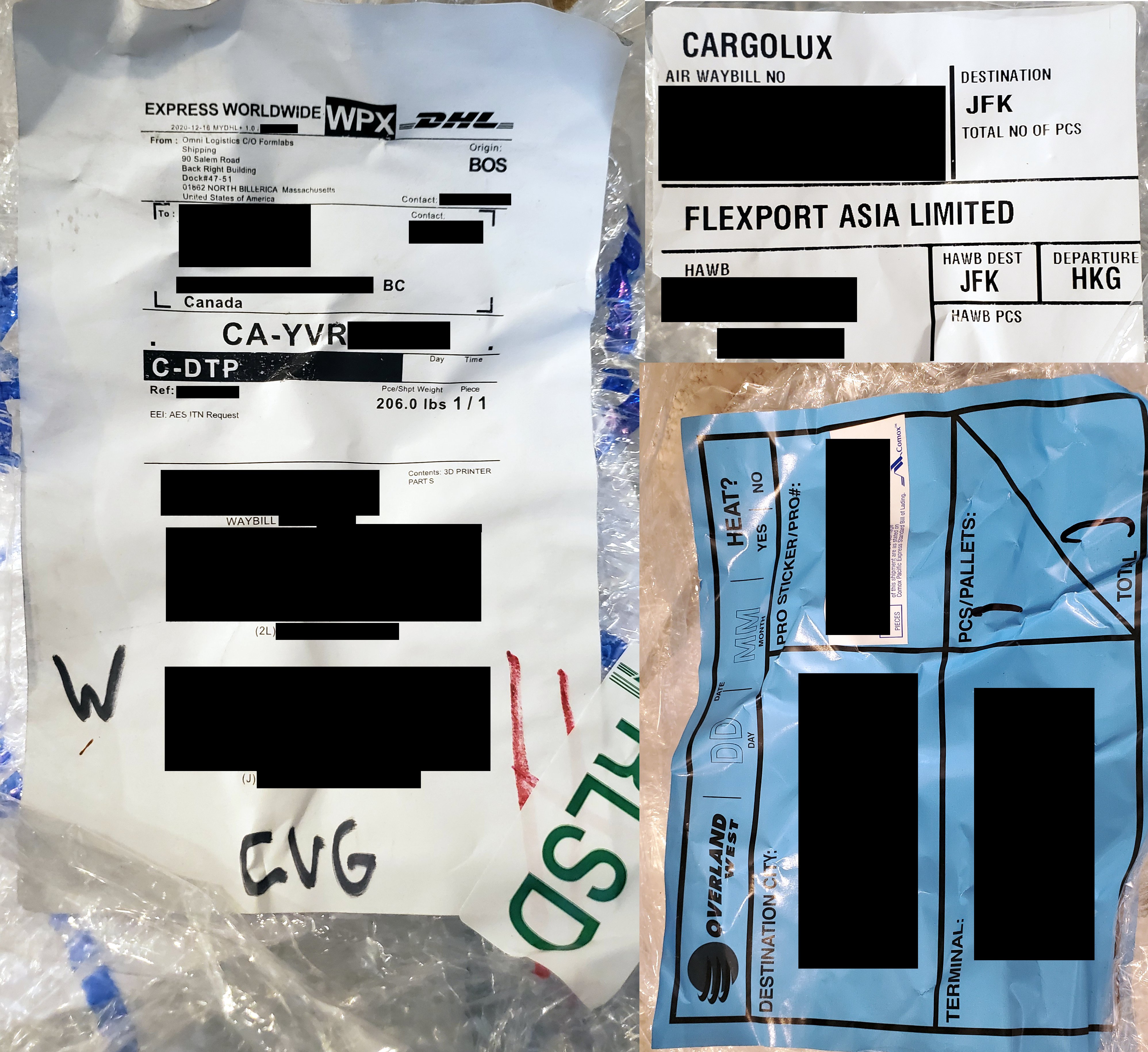 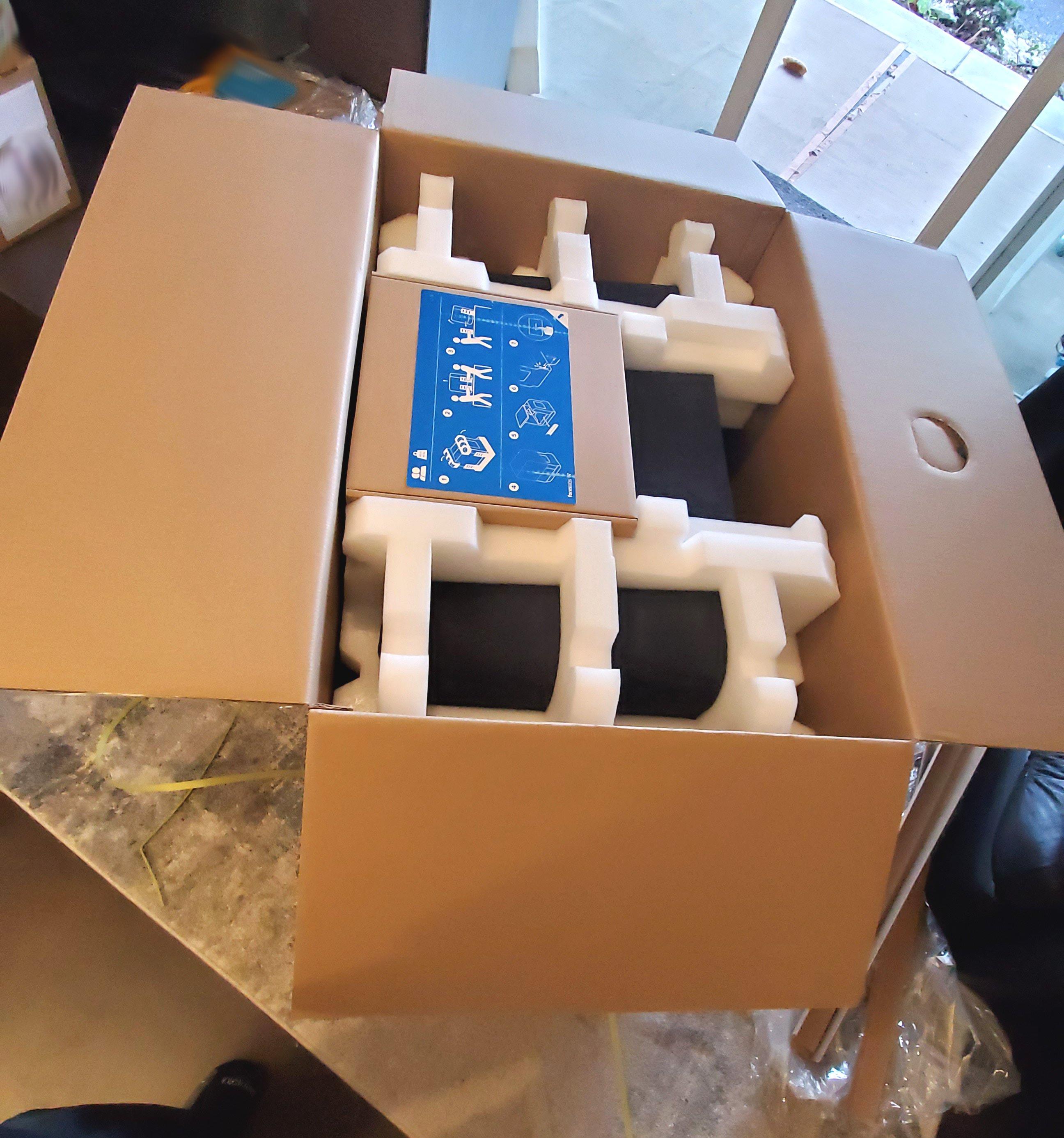 The power cord was peeking out through that oval cutout on the right.

Once you get it off the pallet, it’s actually fairly easy for two people to lift and handle. But I don’t think you want to try moving it alone. It has cardboard lift handles that wrap underneath, just like the Form 3. 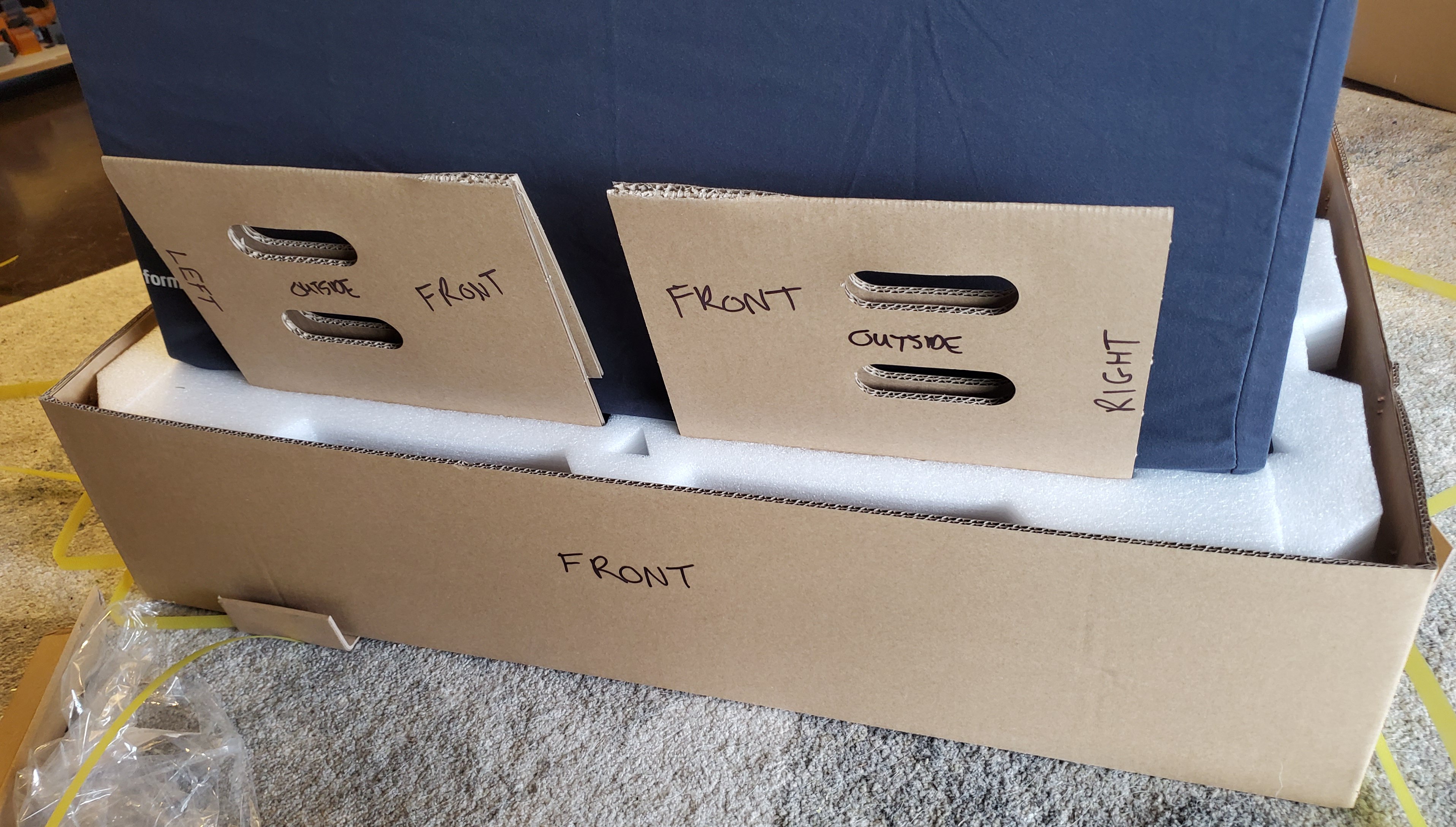 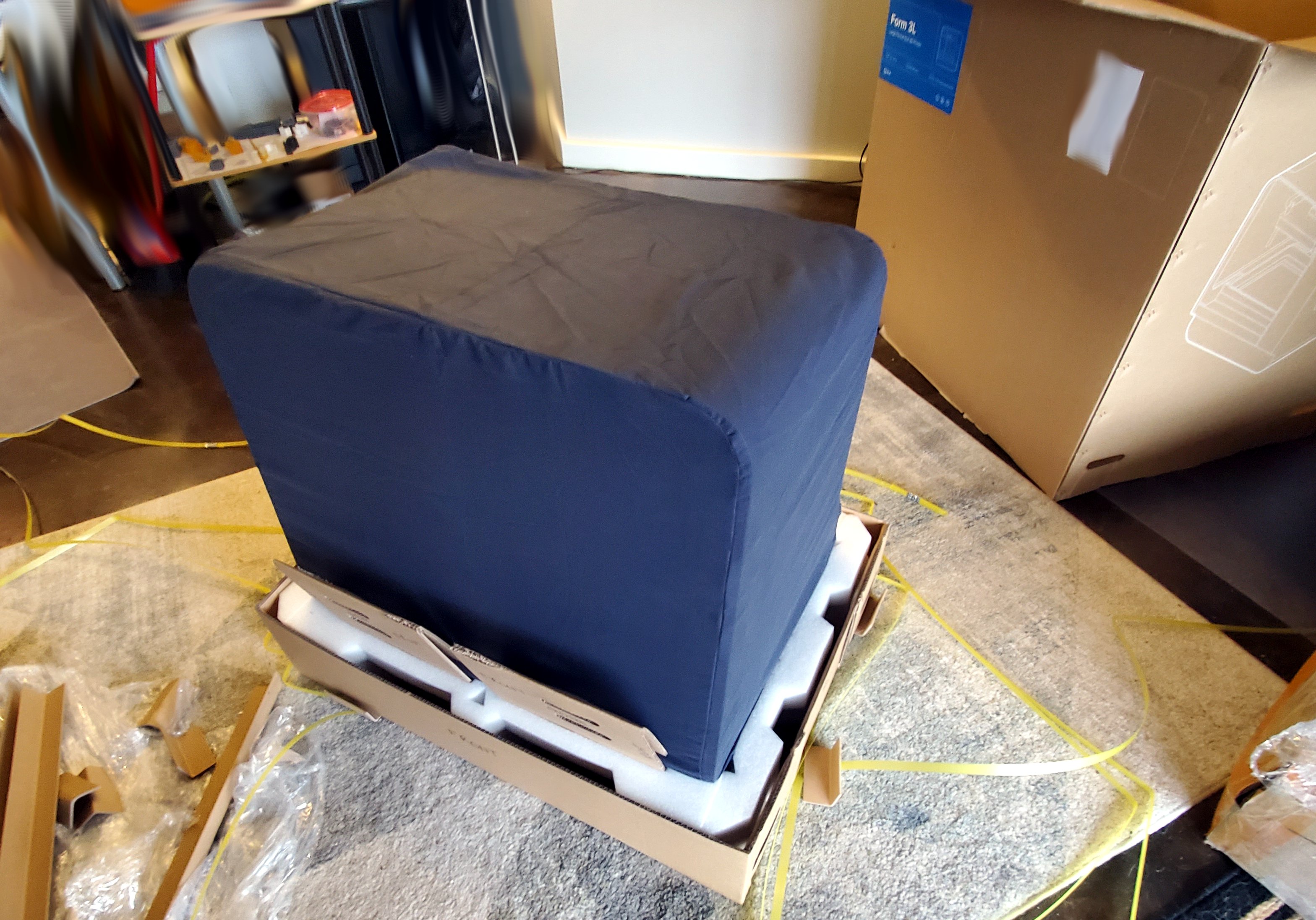 Once it was out I noticed it arrived with a 9" gash in the cardboard packaging: 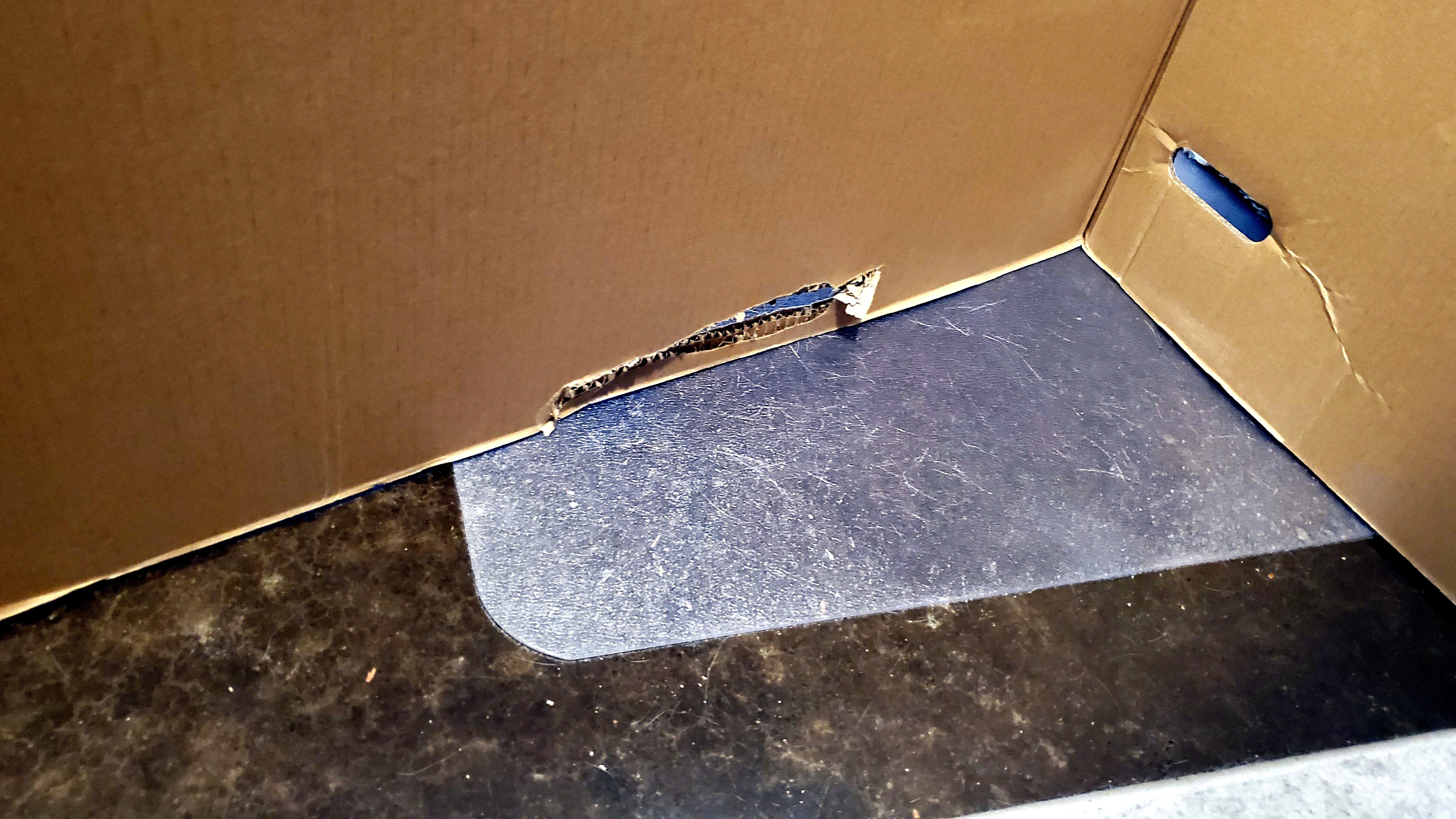 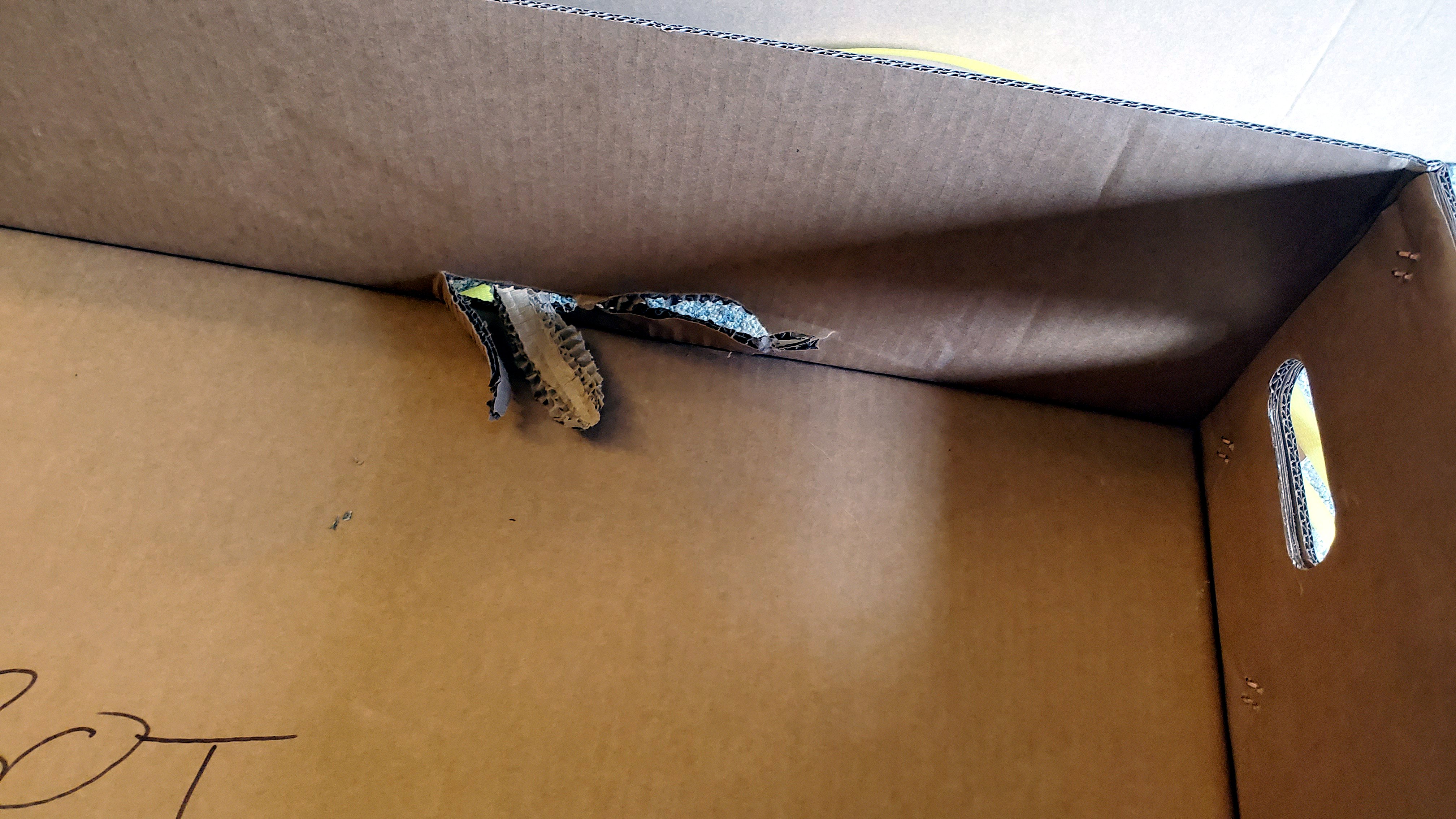 If I had to guess I’d say a forklift operator accidentally jabbed there at some point instead of under the pallet. Fortunately it seems to have slid under the styrofoam base so I don’t think it caused any damage to the machine (but at some point I’ll need to inspect more closely and check the underside for any scratches).

In the meantime, setting up in a temporary location for testing: 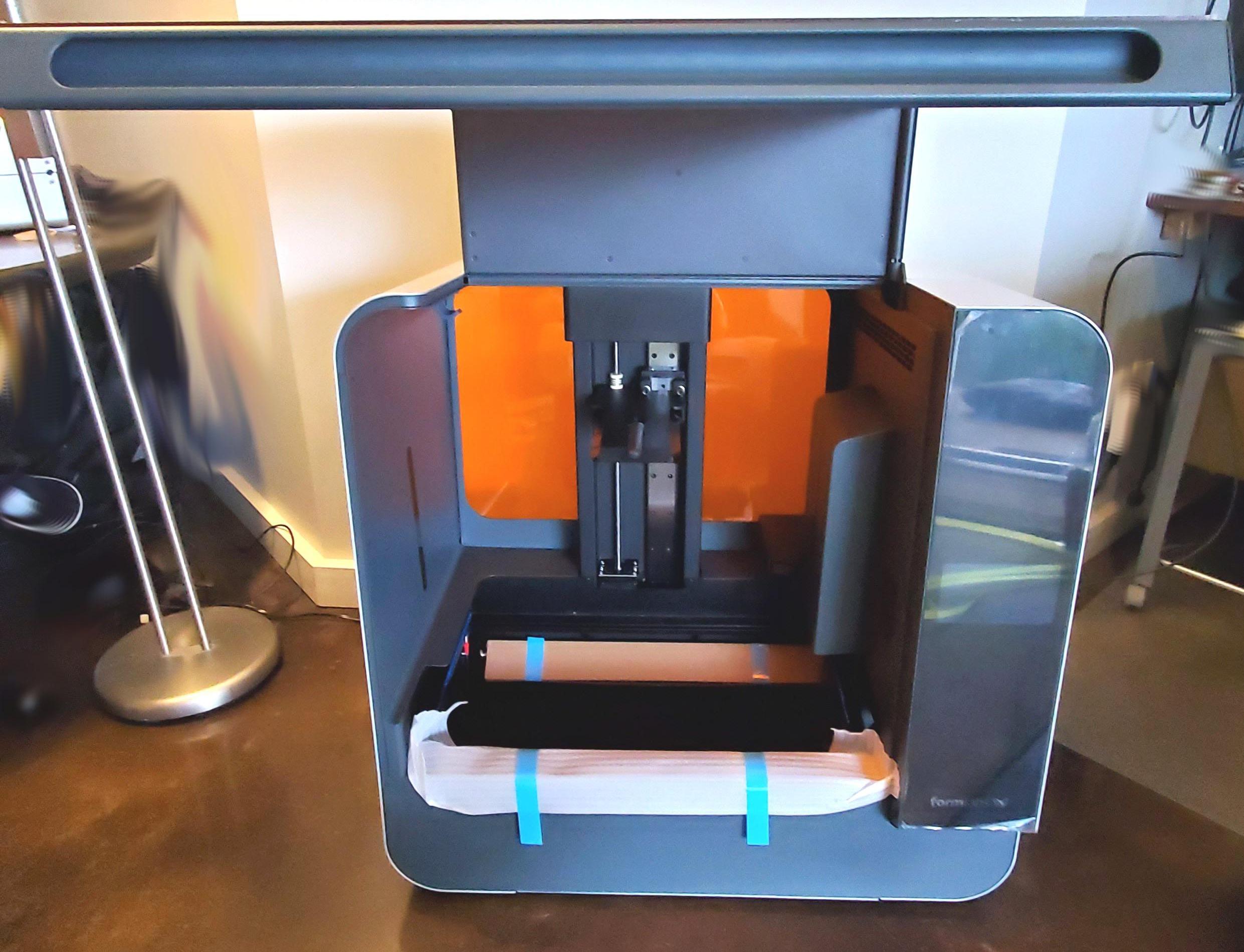 And to answer your burning question - yes, it comes with an on/off switch! 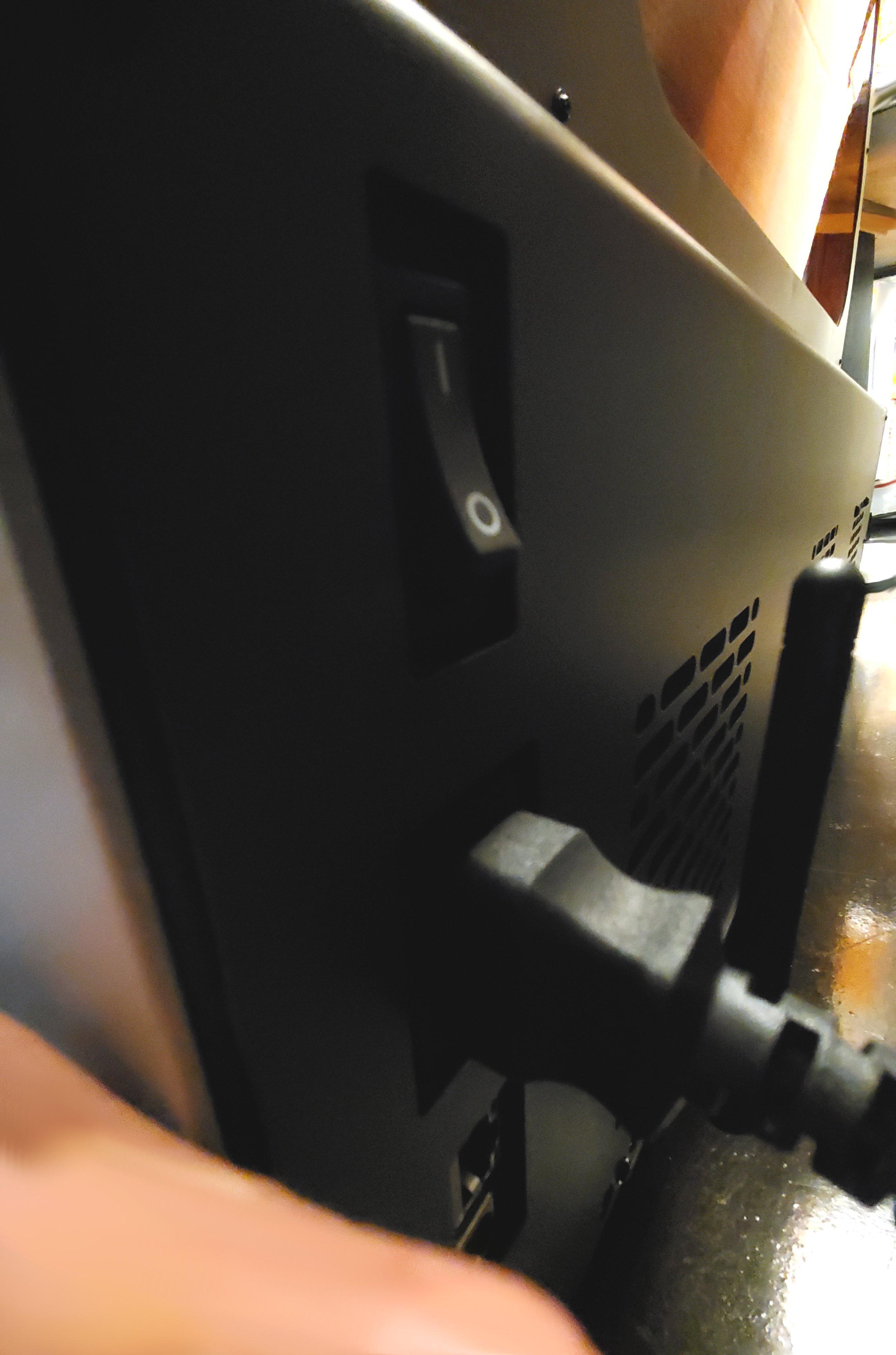 There aren’t any printed setup instructions aside from the blue diagrams on the first box you see inside. But when you power the printer on, the touchscreen walks you through removal of the interior packaging and setup.

There’s a piece of cardboard folded around the thick X axis leadscrew to protect it. 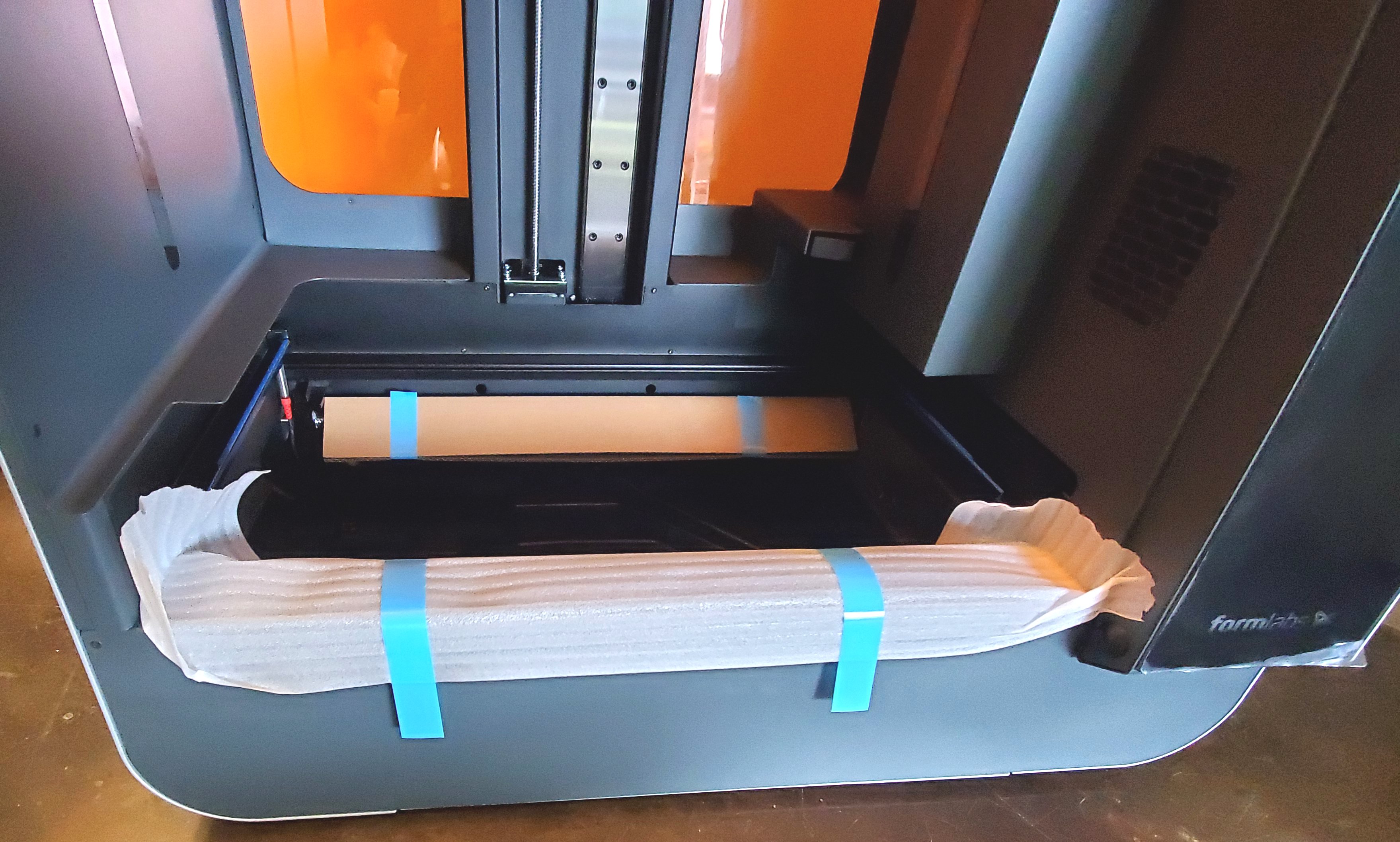 Be careful not to nick the ribbon cable if you reach in to remove those blue straps of tape.

The door mechanism feels great to operate. I noticed the left side of my door isn’t flush - it slouches down a bit. Will have to ask whether that can be adjusted. 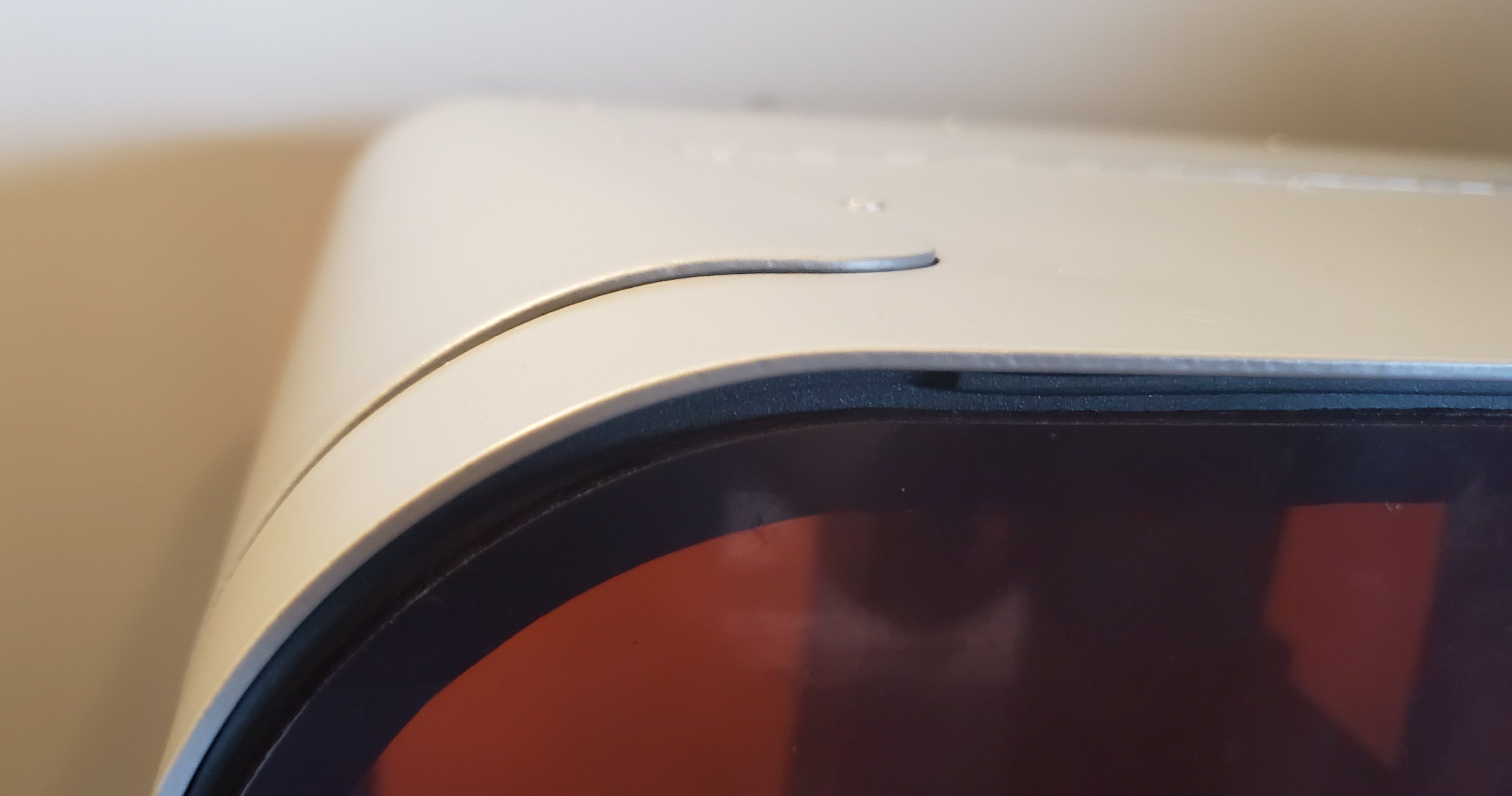 It comes with a giant, metal version of the Form 2/3’s plastic leveling tool to adjust the feet. 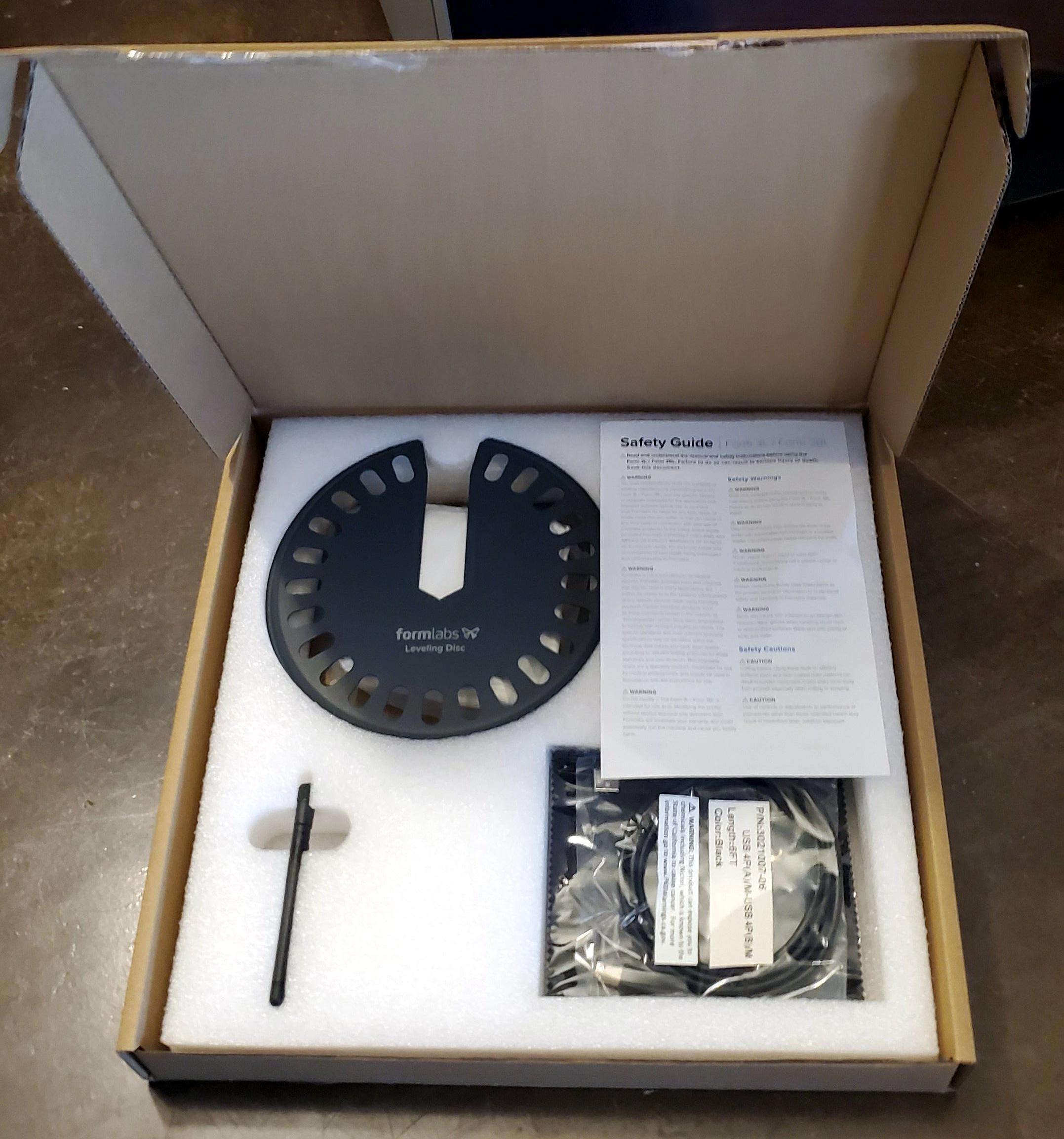 The wifi antenna is external, identical to what you’d see on a router. If you move the machine, you should probably take it off to be sure it doesn’t get caught on anything and snap off.

The tanks come in what may be an over-engineered, but reusable box, complete with magnetic snaps for the lid. It feels like a box you’d get from Apple. The orange window looks like a handy way to peek in and see what kind of resin is inside. 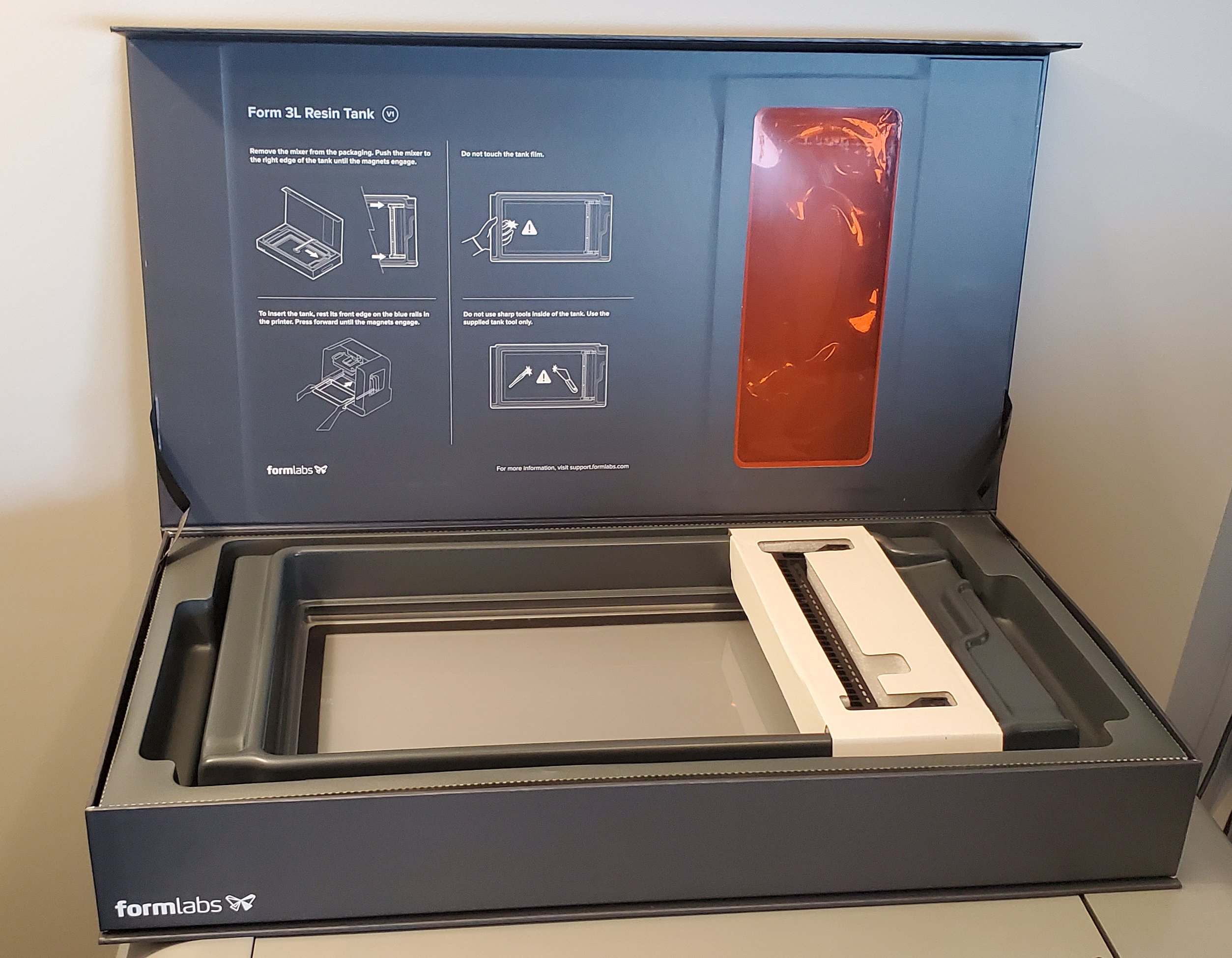 The mixer looks similar to a Form 3’s, although there are two pins secured with a glob of melted plastic. Not fancy, but it works. For a moment I thought those were leftover burrs from injection molding and almost tried to smooth them off with my fingernail. 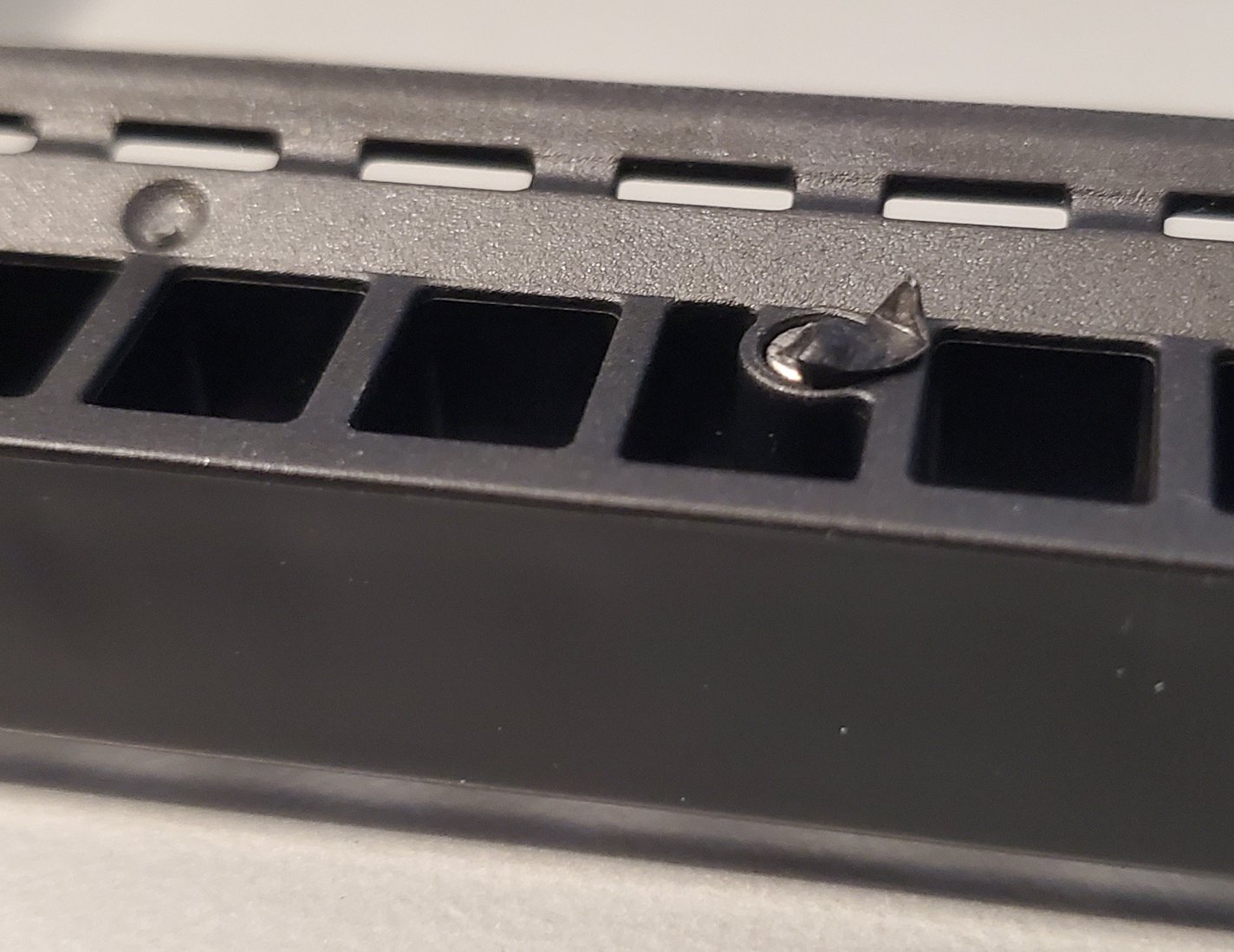 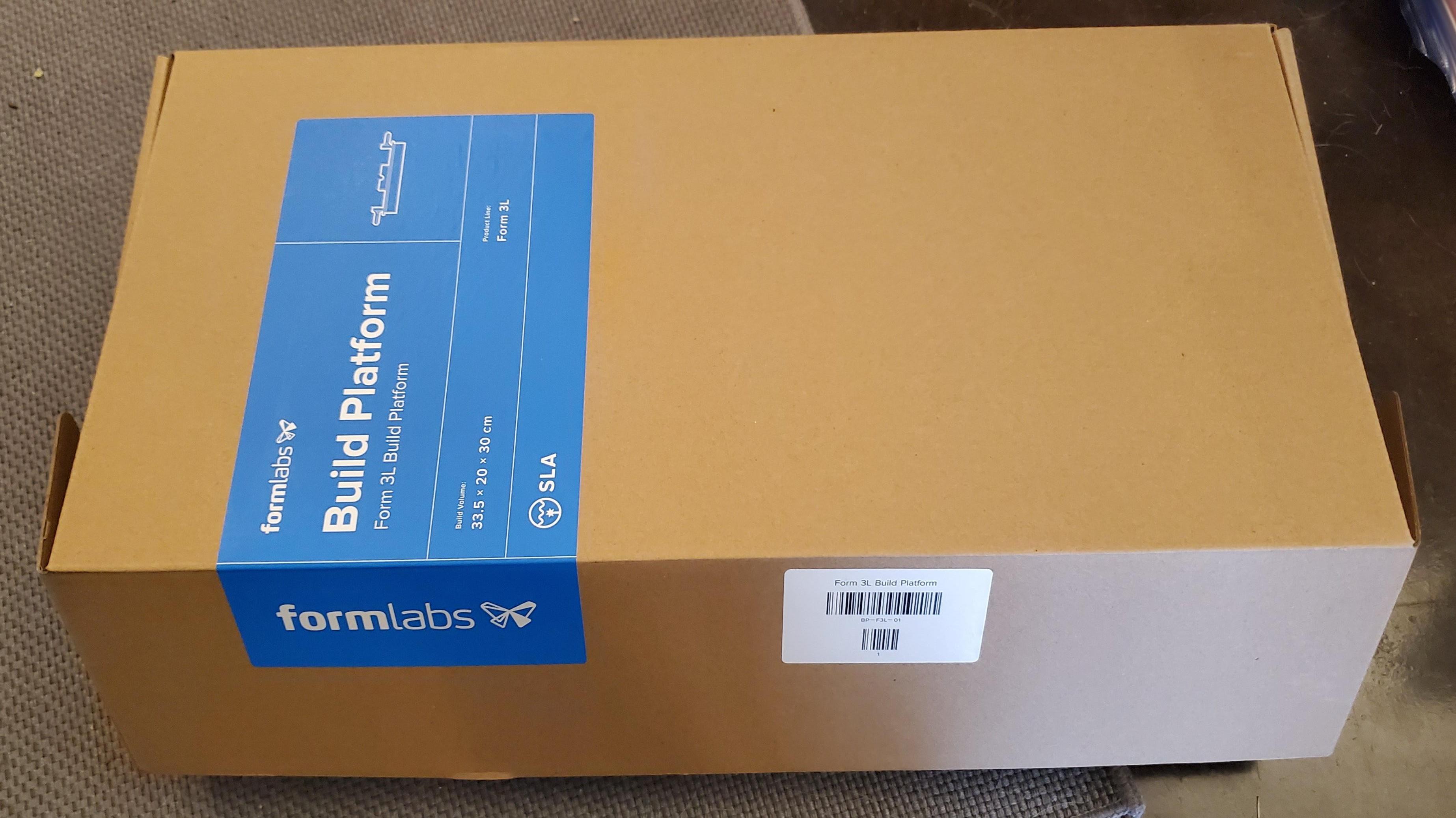 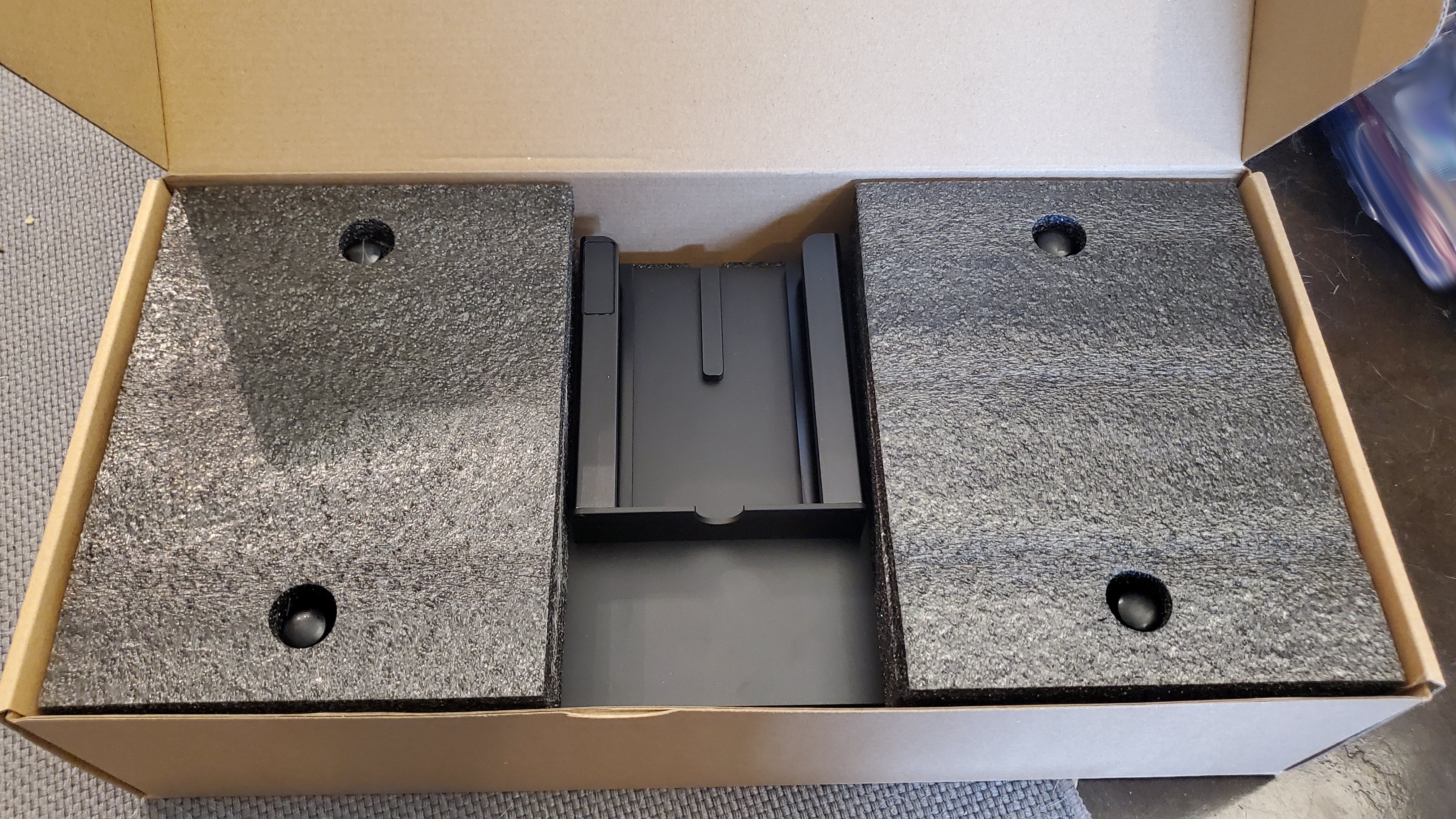 …and the Finish Kit: 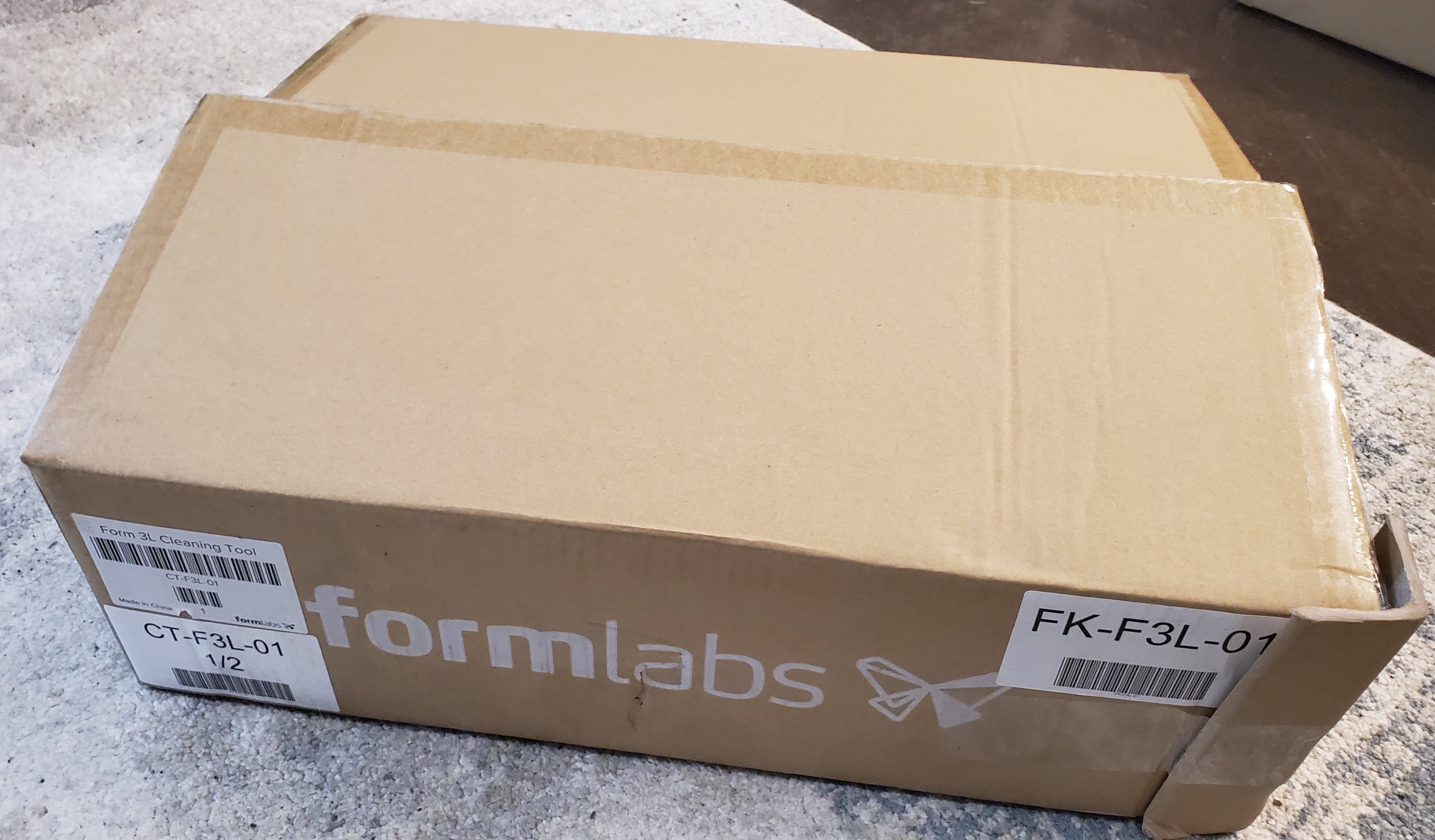 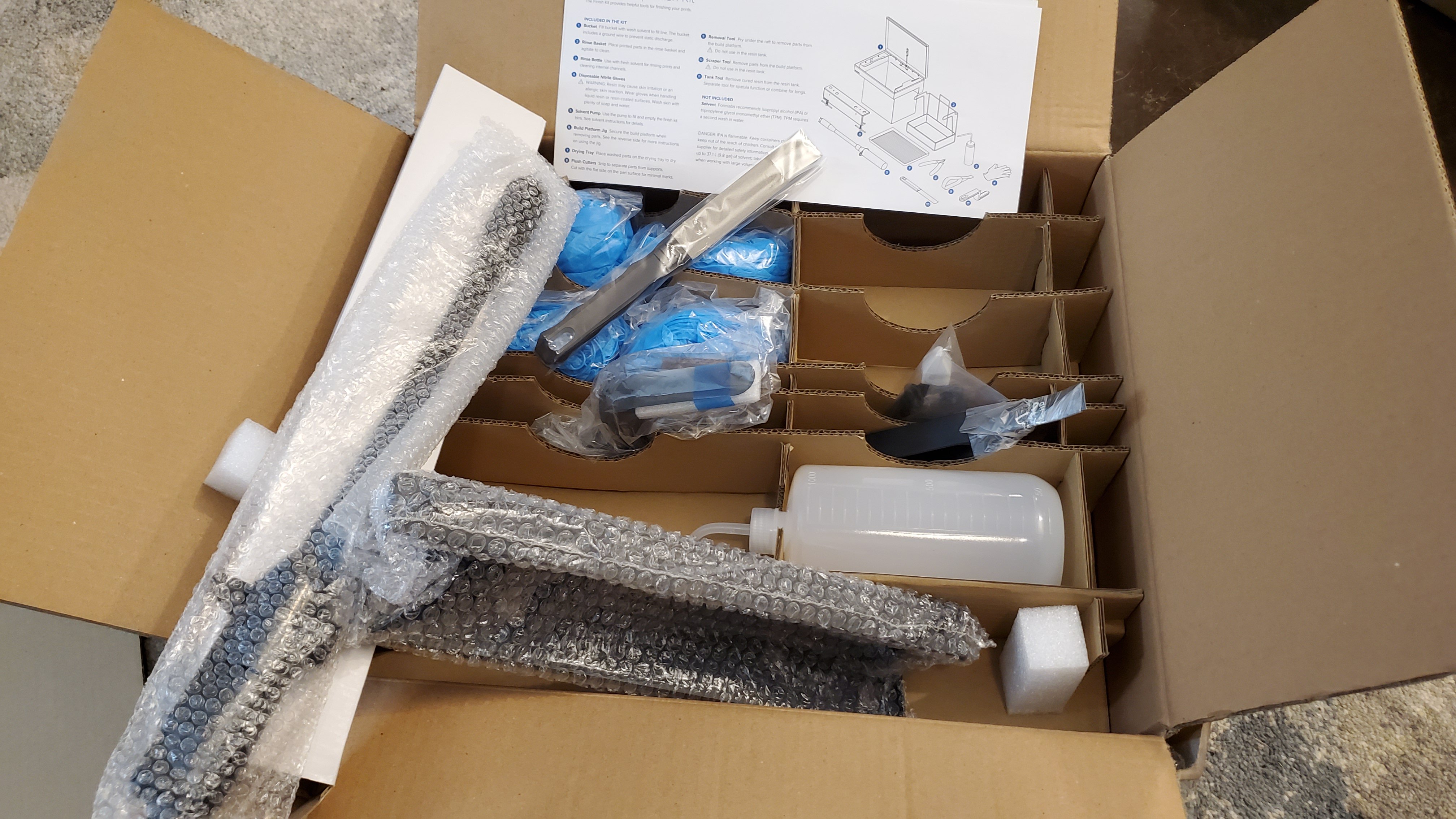 Looks like the same tank tool, removal tool, and flush cutters you get with a Form 3. The much-touted new flat, blade-like tool is also included. Note they mixed up the names of the scraper and removal tools (#9 and #10) in the online 3L finish kit documentation here, but it’s correct on the printed sheet included in the kit. 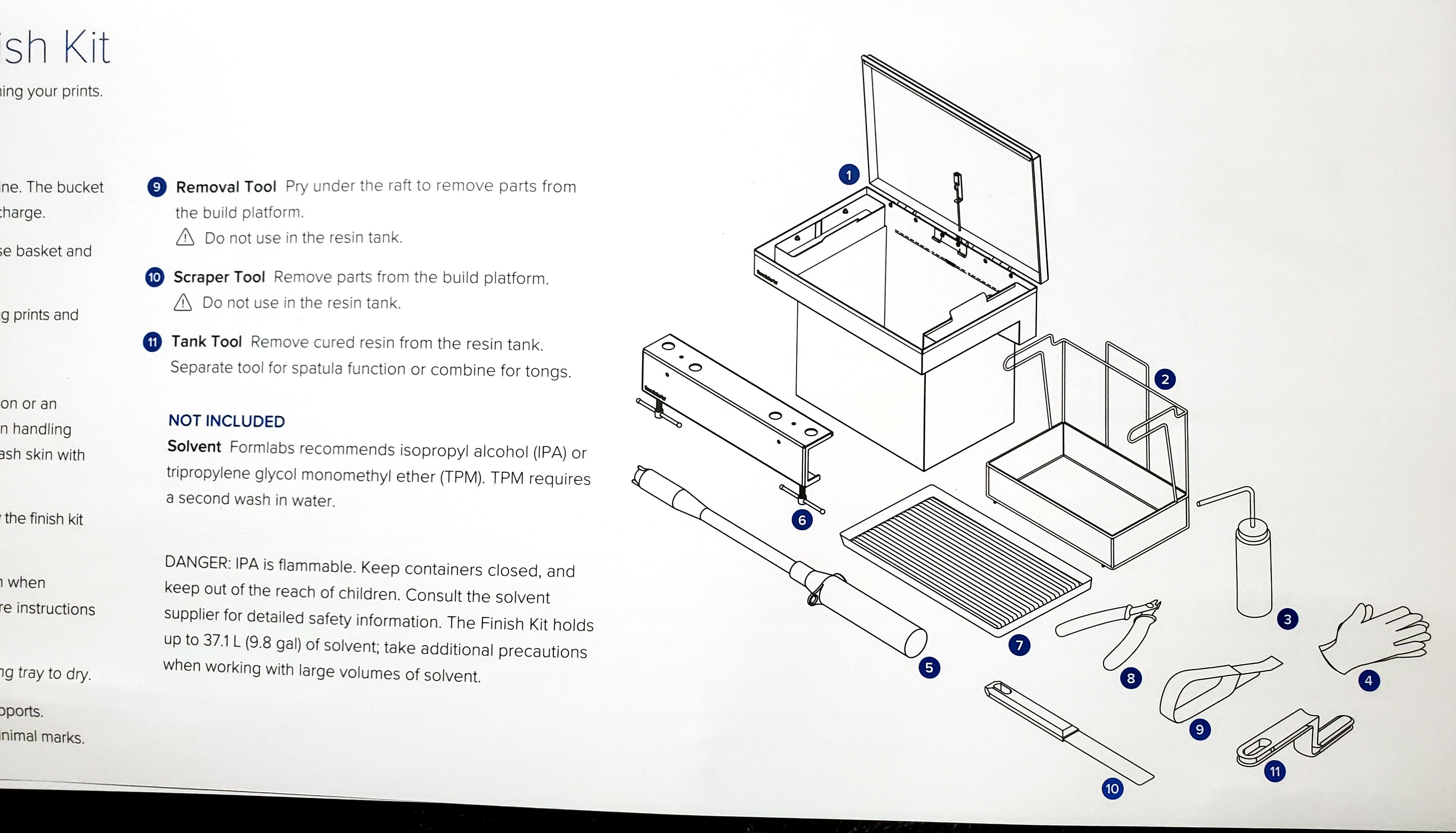 Speaking of diagrams, the “rinse kit” sent to early recipients isn’t quite as pictured. Apparently Formlabs thinks I need a new turkey fryer. 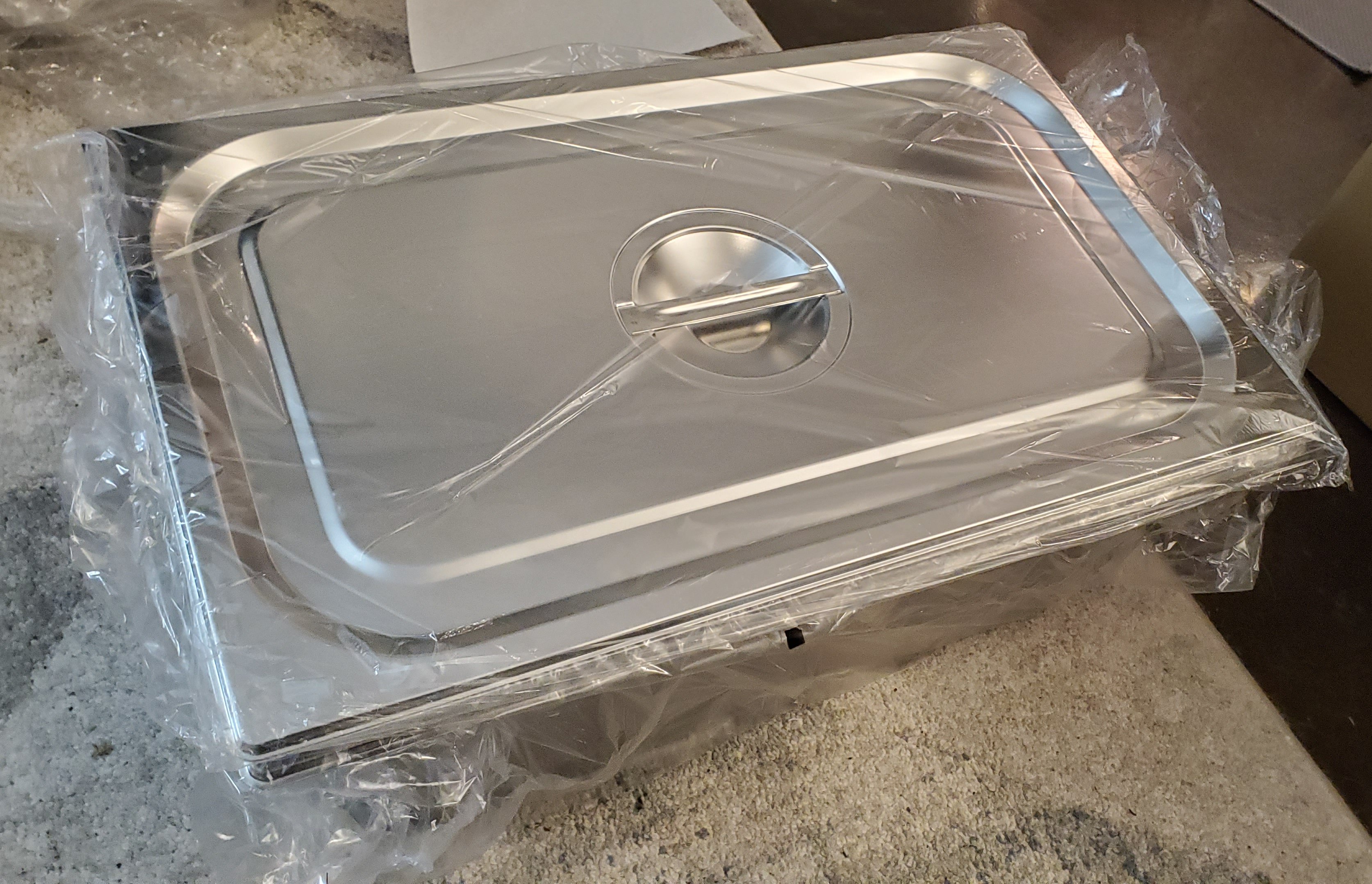 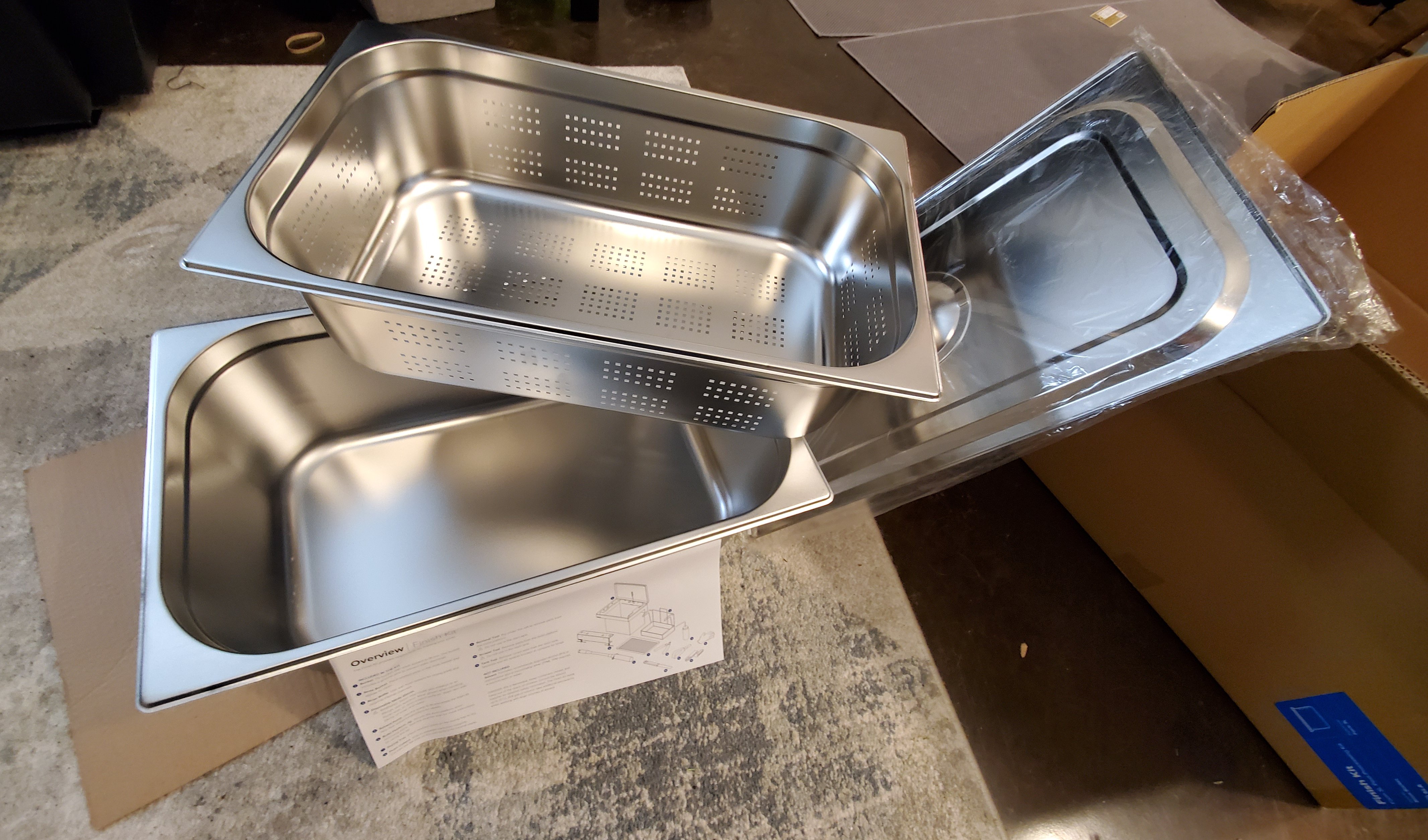 In fact I’d actually love a stainless steel rinse station with rounded edges instead of corners - I expect it would be so much easier to clean than plastic buckets! But this guy is a bit of an awkward match to the Form 3L build volume. I don’t think you’d be able to fit the biggest prints in it (like that speaker casing showed off in the demos).

My favorite quality-of-life feature so far is a hook on the left side that you can hang the platform on for draining. It’s a nice touch. 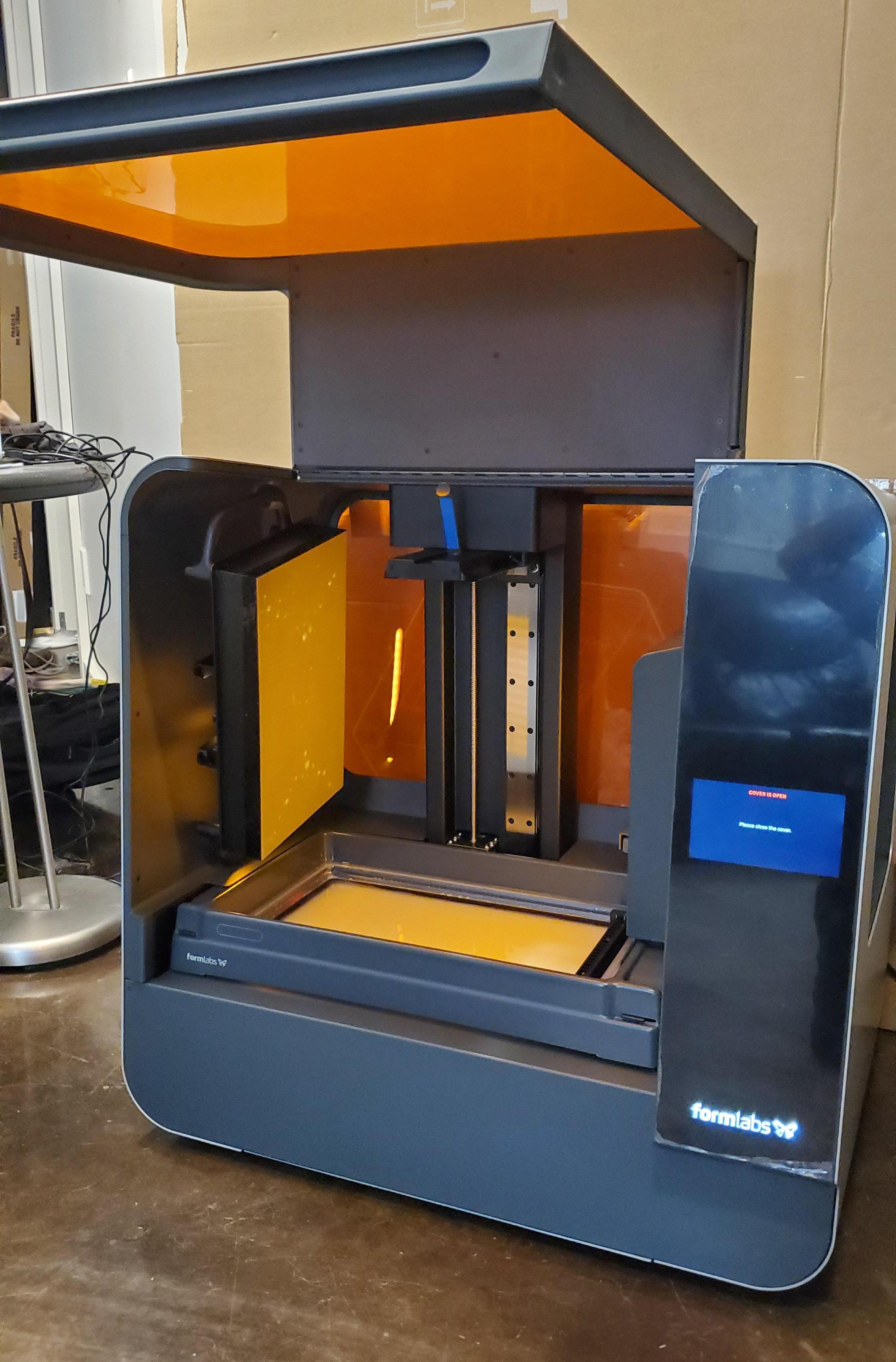 Now, off to do some prints! 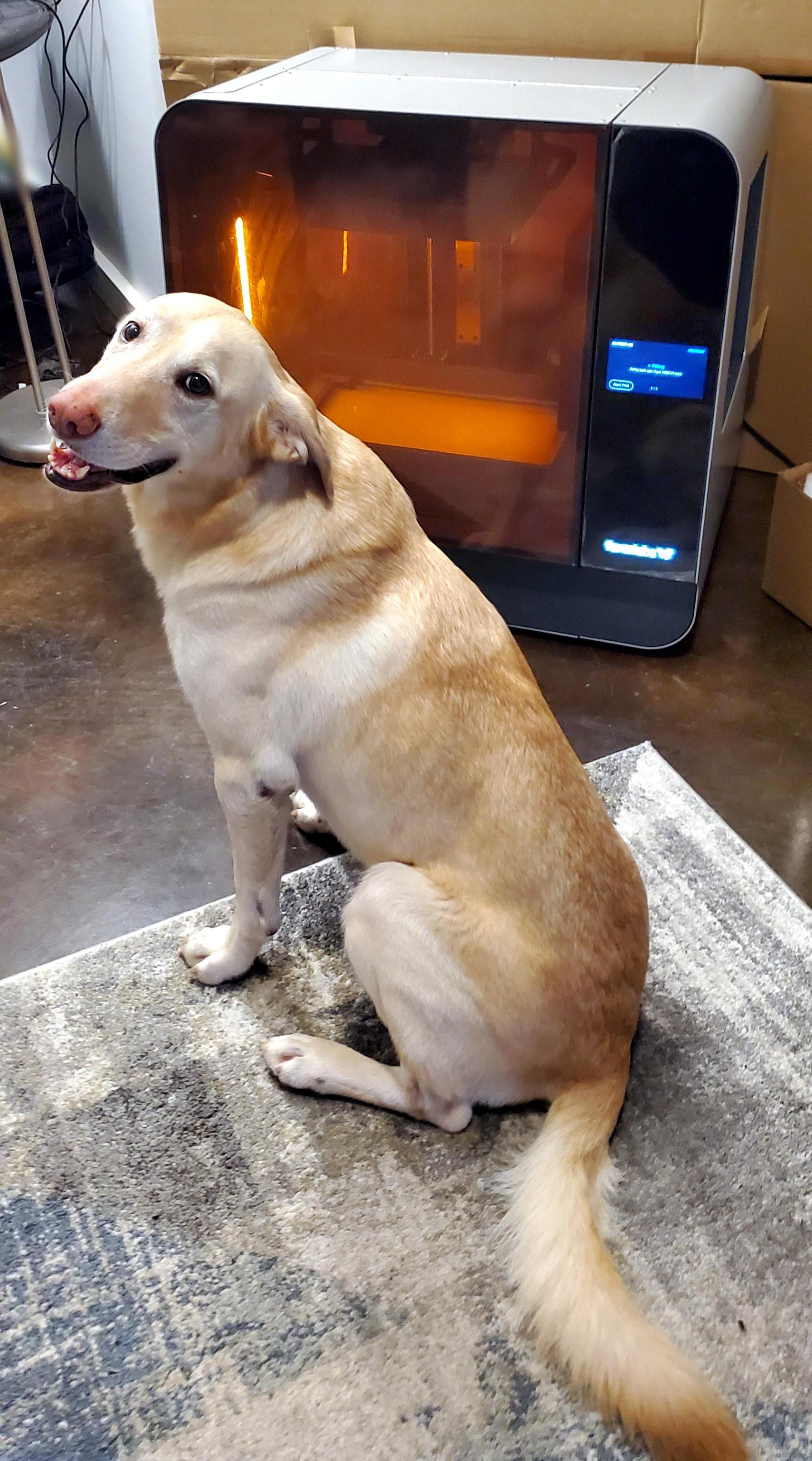 I find my Form 3 sometimes has trouble with big prints that occupy a large portion of the chamber volume. Curious to see if the Form 3L has the same problem, presumably at larger scales.

Hey- congratulations on being able to get to work! For my first question, I’d like to ask when you ordered it/how long you have been waiting. And for a follow up, did FL get in touch with you specifically to let you know it was shipping?
Thanks!

So why DHL? That means it is made overseas for sure.

Look forward to any updates on the printing.

Yeah, its an open fact that much of the machine is made in China.

so cutting down the manufacturing cost and meanwhile presale. A typical way to increase margin and lower cost. I am ready to get into Formlabs IPO

For my first question, I’d like to ask when you ordered it/how long you have been waiting. And for a follow up, did FL get in touch with you specifically to let you know it was shipping?

Hi Steven, sorry for the delayed response. I don’t want to share the precise date I ordered. I wasn’t first in line, but it was before the deadline for the pre-order discount. I’m in Canada, I think there were some folks in the US who received it sooner.

For your second question, Formlabs did get in touch. In August they asked if I had a loading dock or would need a liftgate, and billed me for the freight shipping. In late November they told me it was delayed (yet again) due to a manufacturing issue at the factory - one of the parts on a recent production run didn’t meet spec and had to go back to be remanufactured. Then in mid-December I got a surprise email saying the order shipped, and a tracking number shortly afterward.

Also had several correspondences with one of the customer success reps while it was in transit. I think it was stuck on a truck at a DHL depot over the holidays and she was really great in helping push them to complete the delivery.

Look forward to your feedback on the print quality. I just ordered the machine and i am not expecting it until 2nd quarter of this year.

I’ve only run some small prints so far. Here’s a “slit test” print I previously used as part of calibration. The design widths of the gaps are 1mm, 0.8mm, 0.4mm and 0.2mm and their underside (facing the build platform) are chamfered outward. Resin is Rigid 4K. I included one from my Form 2 for comparison. 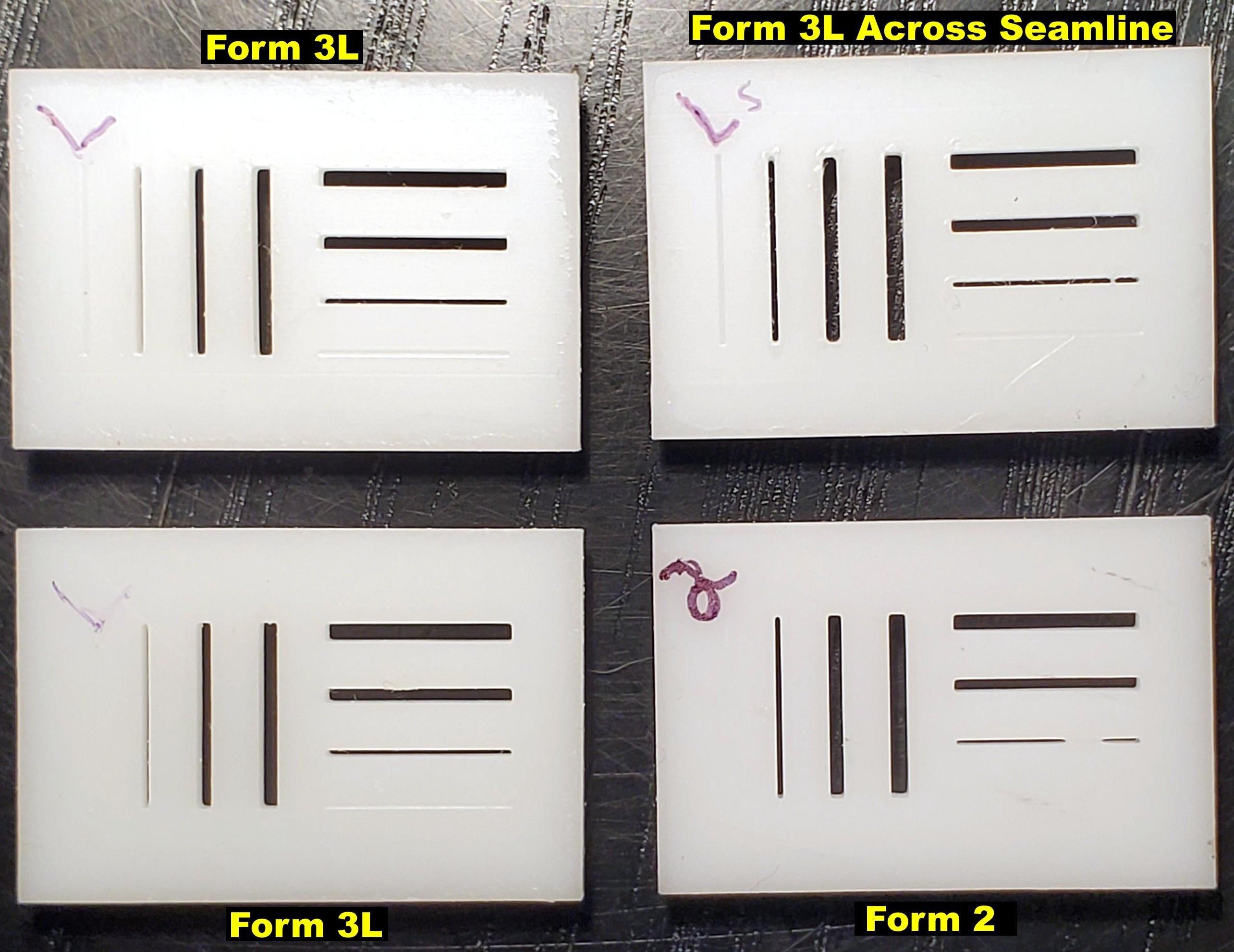 Formlabs says the seamline isn’t very noticeable in Rigid and they’re right. It runs horizontally across the “Ls” part and I drew a little arrow to point it out: 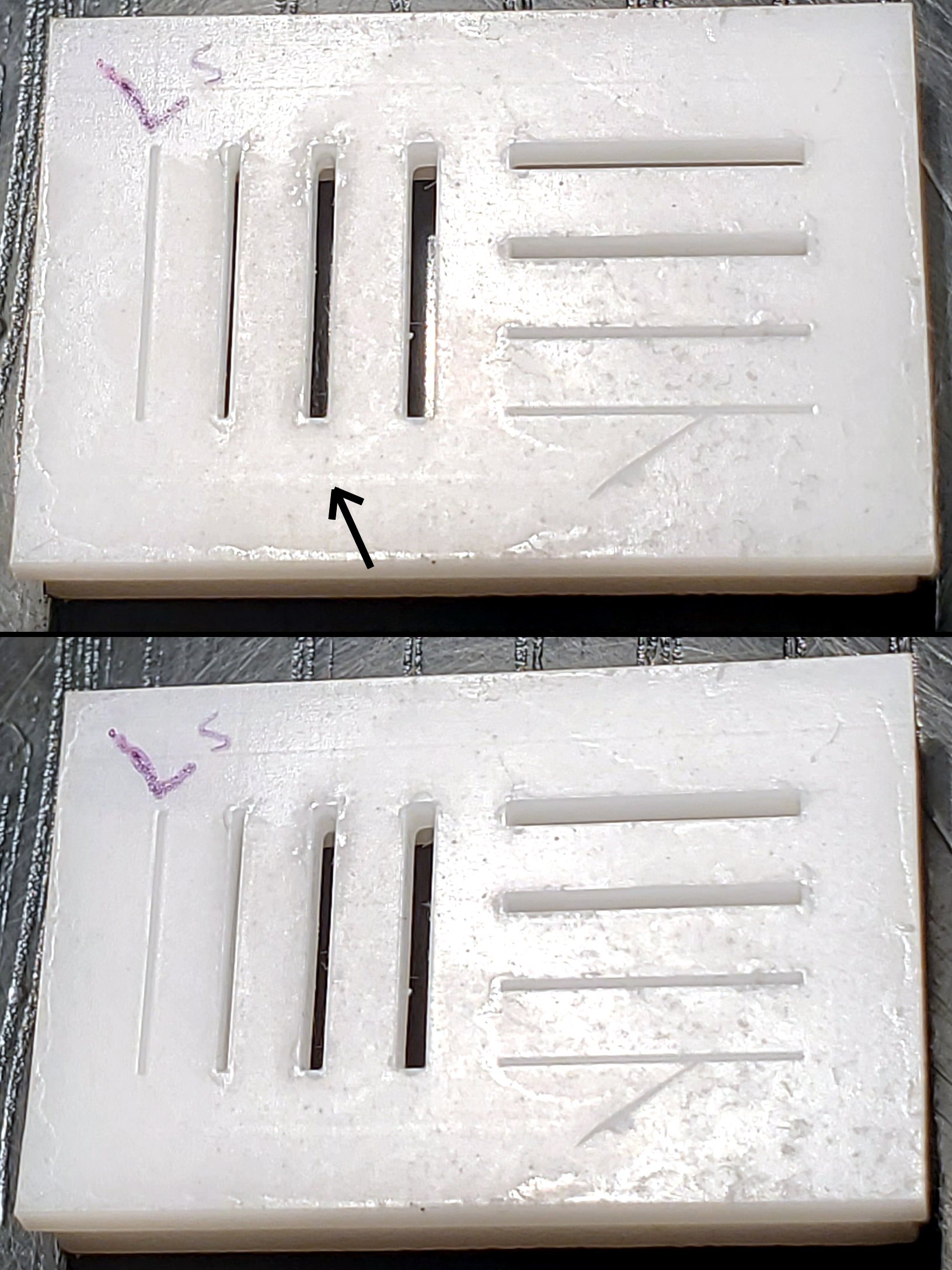 BTW here’s the underside of that model: 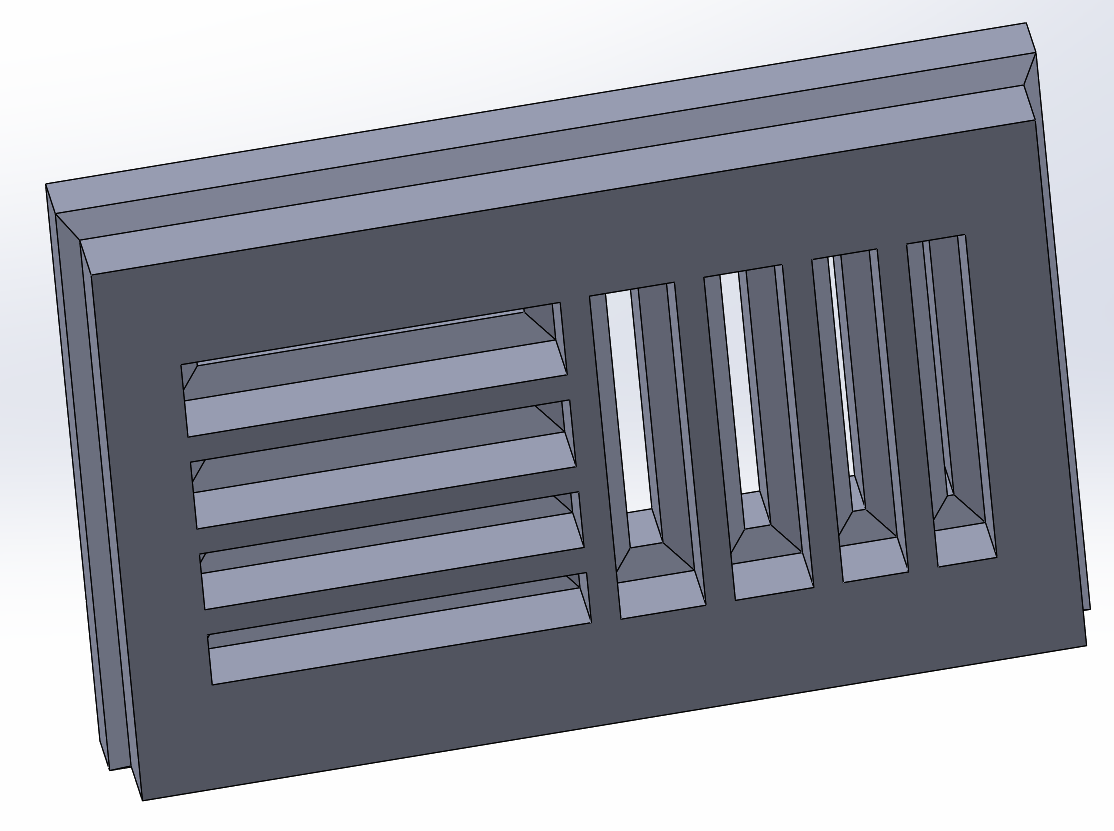 look forward to some big prints.

But when you power the printer on,

At last - a POWER button! Form3 owners dont get such luxuries.

Looking forward to getting the machine. Lately I’ve noticed my form 2 seems to be warping my parts. By the looks of it your print looks spot on.

@rkagerer - I’m expecting my Form 3BL on Monday and excited to get it (finally). During the onboarding call today, I mentioned that I’m hoping to not get the veggie steamer basket from the commercial kitchen store as my wash station versus what was shown in the picto-gram. I was told that was the Phase 1 version of the wash station and that Phase 2 should be coming out Q2. Anyone who got the veggie steamer can get the Phase 2 setup if you ask for it.

It was also mentioned that the automated wash station for the 3L will roll out by Q3. I’m sure I can rig something up far cheaper and sooner well before Q3.

Also, little known fun fact for those of us that are going to burn through a substantial amount of resin with the 3L (which they say is greater than 3 liters per month), is that there is a 6 month/12 month subscription plan for consumables. You need to take a minimum order of 5 liters/month for minimum discounts. Just ask your sales person about it. I’ve snipped the discounts portion from their preliminary terms document below. It really highlights what kinds of profit margins they are working under. Probably >60% if they are willing to take a 30% hit on large resin orders.

Lol, here is another example.

Industrial SLA resin made in Euro sold in the US $300/kg while same resin sold in China is $45/kg.

The only reason for such a wide difference is there is an alternative knock-off resin made in China.

Thanks god, Formlabs lock down the resin.