Removing parts from the build platform can sometimes be tricky, especially if you print a part without support structures. Sometimes you will be tempted to use a razor blade or chisel, but these tools can result in injury. In this post, I write about a different part removal technique that relies upon clamping the part (to get it to compress a little bit) so it shears itself off of the build platform. I made a 2 minute video featuring this magical way to remove parts! Watch it here: https://you…

Not sure how well it will work with Tough V3, but it’s worth a try.

I am having the exact same problem with my Form 1+. I have been told there are no problems at HQ with part removal there. But so far, they can provide no explanation on why I am having a problem nor can they provide a troubleshooting procedure or a fix to the issue.

Thanks for the video link, mattkeeter. But I doubt this will work for what I’m doing. First your bases are much smaller and your not using supports, my build bases are quite a bit larger and I use supports. When I print smaller stuff they pop off easily it’s the larger stuff that’s giving me troubles. When I used the tough resin V2 there was no problems but this V3 tough resin is a whole different animal.

I’ve had trouble removing Tough V2 prints from my Form2 build platform. FL recommended I move the Z height up a little. But I have literally done 100+ prints with the printer since I got it, almost 5L of resin now, and I haven’t had a single failure. I don’t want to mess with it.

I got one of these: Insulation Knife, which is dangerous as hell, but actually works beautifully. If you can get the edge of the knife under the print, it will always pry it loose. You just have to be really careful. One of those “think about each move you’re going to make before you make it” scenarios.

Every once in a while a shard of base will remain stuck to the build platform. For those, I use one of these: 2" Wood Chisel. Lay the flat side of the chisel against the build platform and slide, it catches and removes anything that’s still stuck.

The chisel is no good for removing prints, though. The angle of the blade is too steep, it tends to break the base. The Insulation Knife blade is really thin, which is why it works better for removing the prints but isn’t so good at removing any remaining shards.

I’ve never had a problem with tough V2. It’s the tough V3 stuff that’s giving me fits. I use there tool, and it fits under the lip but then it breaks right there. And there’s no way to get under resin anymore, it’s like welded to the build platform.

I’ve had V2 stick and had to resort to a hammer and chisel. When that happens, leaving the platform in a vat of IPA overnight helps. Doesn’t seem to damage it, either. Still hard to remove, but at least possible.

But every time I see sticking, it goes away completely with a good sanding with 100 grit, then 320 grit sandpaper.

Now, at the first sign of too much adhesion, out comes the grit.

I had the same problem, but I found that the sharper or thinner the tool is to get underneath or more between the built structure and the platform the better it works. The Formlabs tool is not very plane and not very thin, so I bought some plastic tools which are made for removing the glue weights on car tyre rims or to remove a highway vignette. Also these tools do not damage the surface of the platform as a metal chisel. 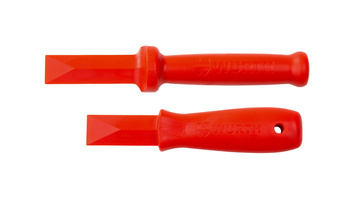 And there’s no way to get under resin anymore, it’s like welded to the build platform.

Thus, my use of an Insulation Knife. The blade edge is thin enough It gets under the base whether or not the lip of the base is intact or not.

I would have my xacto chisel blade would work but nope.

How durable are these? I ask because I’ve gone through 3 xacto chisel blades already.

Being that I am having the same problem, there is something wrong. I have had parts that were difficult to remove. These are impossible to remove. It is like the pass count is too high or laser power is incorrect for the first layers. There is no way to get under the raft. It chips off in tiny pieces shattering the whole way through. I only resorted to a chisel after running out of options. I gather if I used the insulation knife, I would have to bash the back with a hammer netting me the same results. There I is no nice way to remove these rafts. The xacto chisel blade would only shatter. Nice and thin. But it wouldn’t stand a chance.

I agree, I’ve went through 3 xacto chisel blades on two jobs. At least V2 was flexible enough to get it to lift up.

guys, I have the problem - try to separate prints and after remove the base under hot air gun - it will go soft

also, to lift the base plate a little (0.1-0.2mm) helps significantly, I just successfully finished quite a large print followed by comfortable base removal

What do you mean by lift the base plate?

you can tune offset of Z axis in printer settings

That’s interesting. And your using the tough V3 resin? And of course the next question is how do you make that adjustment?

Unfortunately for me, lifting the Z offset .5mm did not help. I am glad it helped for your printer. Are you using a Form 1+ or Form 2?

@csauve, you can adjust the Z offset by going to: File, Printers, Select your printer, Fine Tuning, Raise Z by X higher.