Anyone any idea what might be causing these teardrop holes in the printed surface. They match up to the locations of some of the supports, but not all. It’s almost as though they’re “shadows” of the support tip. Only the tips of the supports were in contact with this surface in PreForm. The whole part is about 70mm in diameter, so the “fat” end of the holes is about 1mm across. 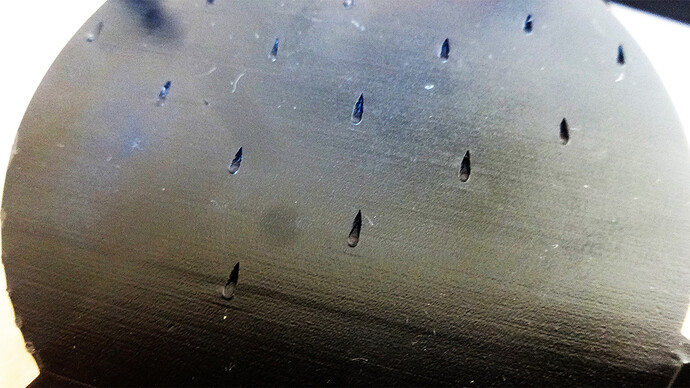 We often see these when something is obscuring the laser like dust on the optical window or in cases of severe tank clouding. You might check the make sure that the optical window is free of dust. If that seems to be clear, attempting the same print with a new tank would be a helpful next step.

Hi Frew, thanks for the fast response. The tank has only done 5 prints and this part was positioned on a clear part of the window (according to the dashboard heat map). Isn’t it also a little coincidental that these marks aligned perfectly with the supports? And surely, if it was something obscuring the glass, how would it have correctly printed the later layers? I would have expected them to be holes all the way through the model (the reverse side of this is completely fine).

Can you upload your .form file so that I can get a sense for orientation? Lining up with supports is a bit weird especially if the supports did successfully print. Do these holes penetrate through the entire part?

File attached. No, they’re only indentations on this side of the print (the reverse is completely smooth).

Hmm, could you try another location on the tank to see if the holes occur in the same locations? Have you checked the optical window to make sure there’s not any dust potentially obscuring the laser?

Sorry Frew, can’t right now as I’m mid another print (different model). But, dust on the optical window? In a precise pattern like this? Dust that just happens to be in exactly the same place as the supports?

Dust on the optical window wouldn’t be my first guess but it’s good just to eliminate it as an option. If you remove the tank and shine a light on the window, that should ensure that there’s not any dust particles obscuring things. Let us know if you notice any of these artifacts on the print you’re running now.

OK, thanks for the support Frew, it’ll be tomorrow before I get back to you.

The marks are fairly uniformly spaced and all the same shape. That’s not particulate. Dust would be randomly distributed and not uniform in shape (at least, my dust would be). It looks “algorithmic” to me, something mechanical or electrical that repeats at a regular interval, or that’s a function of X/Y/Z.

Do the holes drill all the way through or are these “pits”?

Hi Randy, my thoughts exactly - they’re pits and they’re in a regular pattern. If it’s dust or particles in the resin, it’s pretty much proof we’re living in a virtual world

They match perfectly with the supports (see below) but this didn’t happen at all the support points - two or three were fine. I did another print last night - a much larger piece with a complex textured surface and it’s come out 100% perfect. I’m reprinting this model now in my own layout and support structures so we’ll see how that goes, but yes, to me it looks like something procedural in the slicing. 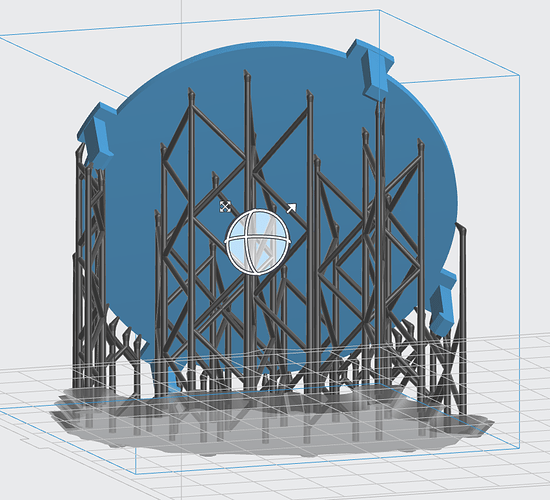 As far as I know, you added too little number of supports therefore they de-attach in mid-print. Either make it densier/bigger points or change orientation (Z axis).

I’ve seen this on a few parts as well lately, printed 1000ml with my Form2 since I got it.
I though it had to do with lousy orientation of the model and that this was kind of “skidmarks” where the print has slided or something like that. My “drops” was also visible just at the point where the supports was attached.

Just to follow this up, after completing the large model (perfect), I’ve now completed four of these models (finishing the customer order) all without defects. Same resin tank, same cartridge. The only difference was that these four were all custom support/orientation rather than the first one which was a “one click print”. As @brainglow said, it certainly looks like some sort of problem with the orientation/supports rather than anything in the resin or on the tank surfaces.

Glad everything seems to be working now. It makes sense that this might be from supports detaching mid-print and obscuring the laser. Let us know if this crops up again.