After cleaning the build plate several times with the scraper (because of some hardened resin), I’m noticing that the gray surface finish is starting to wear off and reveal a shinier metal underneath. Is this going to become an adhesion problem?

I’d rather not buy a new plate if I don’t need to, and from now on I’ll definitely clean it in a more timely fashion/use IPA rather than brute force. How marred have your plates become after use?

Mine is very scratched up after about 95 prints and i have almost no issues with adhesion. I’ve heard from others who have adhesion problems…and their solution? to scuff it up even more with sand paper.

Here is a pic of mine. I’m sure others are far more battle scarred than mine. 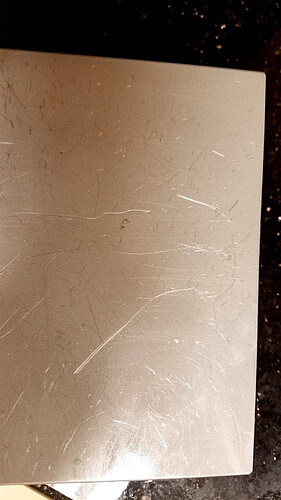 You can run some fine-grit sandpaper over it to remove the scuffs/scratches if you want. But I’ve done 100s of prints and my build plate is marred much more than your picture, and it still works fine. I think too smooth a surface is bad. More roughness only helps adhesion. Too rough and it might be harder to remove prints from the build plate…

If done right your Build Platform shouldn’t have any noticeable scratches.

You’ll gain a lot more control over what happens at the tip of the Tool.

How well things adhere to the build plate varies significantly. I’ve had prints that could not be removed. The print base broke up leaving shards adhered to the Aluminum that required scraping with a knife blade to remove. Even done right, scratches can not always be avoided…

I actually went out and bought a few different tools to help remove my prints. A 10" “Insulation Knife” works great. Much better than the FL supplied tool. But it is very dangerous to use. I also bought a 2" wood chisel. Running the flat side of the chisel along and completely parallel to the build plate works beautifully at getting any chips/shards off that are stuck.