Supports, how to control their start position?

Is there a way in PreForm to control where the supports “grow” from? When I edit the supports I can only change the end point where they touch the model. I usually move these points away from critical surfaces like o ring bores and flat sealing faces and the part prints OK. But when I have multiple critical surfaces it doesn’t work too well no mater what orientation I try. The supports always start from an area that I don’t want a support on. How do others over come this in PreForm? It would be good if you could select surfaces that you don’t want any supports on and let it auto-generate them avoiding critical surfaces.

Yellow highlight below is where the support is “growing from” 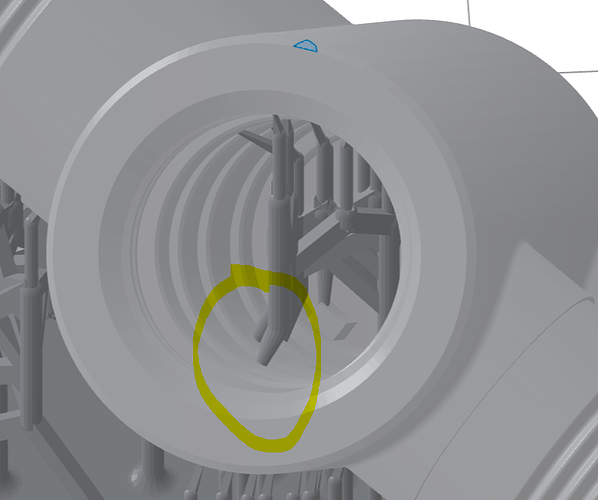 Not that I’ve ever seen. I just adjust the end point until I get a start point where I like it, that Preform doesn’t complain about being inadequately supported. When I can’t achieve that and it’s critical that I have the internal support, I try reorienting the print to find a better solution.

Although you can adjust where the support end goes, you unfortunately are not able to determine the starting position. The best bet would be to adjust the orientation of the part to see if the base of those support structures spawns from a more convenient location.

Lychee Slicer lets you specify both end and start points of a support, plus a lot of other aspects of the support. You can export a fully supported model as an STL and then drop it into PreForm.

Thanks @Multiscale, that sounds like it could be a helpful software!

The best bet would be to adjust the orientation of the part to see if the base of those support structures spawns from a more convenient location.

This is what I have been doing, but it is a very slow process and you don’t know if the next orientation will make it worse or better. It takes so much time to reorient the part and then check all the critical features don’t have and supports “spawning” from them. Sometimes even deleting one support contact point completely changes the way the support “spawns”. There has to be a better way?

Thanks, I’ll give it a try. I’ve been also trying out CHITUBOX slicer as it has similar functionality. Although when importing the STL from it into PreForm, PreForm complains about not enough support and wants to add supports to the supports.

That is indeed a great point; you can submit PreForm feedback in the Help menu, and I can do my part to pass this suggestion along internally as well. I personally can’t speak to the intricacies of our algorithm, but it is possible that there is a good reason for this, but there is no reason to not at least send the request.