Hi all,
So I’m primarily doing machine/industrial design so I’m not well versed in non-parametric softwares. My guess is there will be some people here who will have experience in that kind of stuff.

Layer lines are unavoidable, and sanding them down takes time I don’t have for parts where aesthetics aren’t critical. However I think that if we could apply some sort of orange-skin like “texture” (not bump-mapping but represented on the mesh so that the printer can pick it up) to some non functional faces of the part may help in getting a better finish without post-processing. It will obviously not remove the layer lines but I think it will make them much less noticeable.

I’m looking to model a part in solidworks, and then export it (whatever format but STL would be my guess), open it in another program which would allow me to select a face or paint an area and add a texture to the mesh.

Meshmixer has brushes and other manipulation tools but it seems quite unprecise and it doesn’t seem to work everywhere, is difficult to set up and has very unpredictable results.
I also use Element from nTopology to add some lattice structure to some parts to save weight/resin but I can’t seem to find a way to *hack"it to add texture to a face.

I am looking at something like the 120 to 300 roughness range from this image : 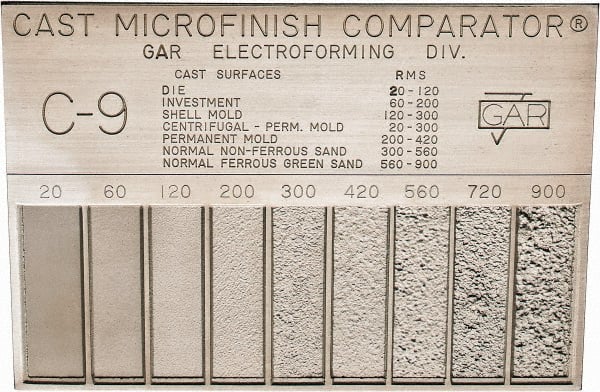 But really any kind of texture that helps in masking the layers lines and add a “non 3D-printy” look to the parts would be great.

I do think that texture on the surface would help. But, with the texture comes extremely large file sizes.

The idea of adding texture to areas of the part isn’t as easy as you might think for preform. Remember that everything is triangles and that those triangles are almost never aligned with the area you would like to texture. The best place to do this is in the modeling environment. I’ll be asking Fusion 360 to look at adding this feature…

Yes I have always agreed with the concept that Preform is a slicer not an editing software, which is also why I didn’t post in Feature Requests but in General, I’m looking for a 3rd party software because the parametric software I know aren’t able to do that.

I have looked at guides on how to apply a bitmap texture to a mesh in Blender and other similar software, but it seems too cumbersome for the use I’d have out of it. So far it seems like the only idea though.

I would love to have a pluggin for Solidworks or Fusion that would allow to do that ! Haven’t found anything though.

You need something ;ike ZBrush or it’s free sibling Sculptris.

Allows addition of skin textures (any textures really) and then decimate the model (reduce polycount) without losing detail.

It sure would be wonderful if texture maps would translate into printable features. A sand cast texture would be great for models where it would be found on the real item. The same goes for knurling and thread textures. Inventor and I suspect Solidworks does too uses a bitmap to represent fastener threads instead of modeled threads to keep file sizes manageable.

It is also possible to directly create the correct thread instead of having to draw a helix.

When I posted this I also contacted my VAR (we use Solidworks) and for the first time they had a great answer to give me without trying to bill me 3000 bucks for a VBA plugin : Solidworks 2019 actually has a feature to transfer a bitman image to a mesh !

Needless to say we will be upgrading to 2019 sooner than the usual.

@fantasy2 I see we just crossed each other. Thanks for the feedback !

I will be updating this thread with some photos once I try this feature.

I hope Inventor offers a similar feature in the future. Solidworks is just too pricey compared to Inventor and all the other software I get with it.

Dassault is very rarely ahead of Autodesk in terms of new technologies, the fact that they have released this 3D printing only feature so soon is very surprising to me, I’m sure Fusion will follow

Still, I’m not confident with the solution yet, Dassault may well have fucked this up and made a theoretically great feature unusable outside of the reseller’s baked presentation.

Arsedick (Autodesk) has made its share of half baked promises of new and great features too; only to have them be useless.

In any case, I hope the texture feature in Solidworks does indeed work as promised.

FormLab did a test 3D printing a focal lens and it worked really good. They 3D printed the initial shape then dipped it in liquid resin and UV cured to create a smooth surface finish. Seems like it could be a good process to get a better finish without the labor of sanding. Not sure if it would save time, but it seemed worthy of noting.

My issue with this method is that you will be coating the whole part. It may work for artistic piece, albeit not some with a low of details, but for engineering parts I want only one side/area to be “treated” with this method.

I am printing the first tests with the Solidworks 3D to Texture tools right now, will report back soon with some photos but so far it’s pretty promising.

Hey, have you made any progress?

Yes ! I’m sorry I haven’t had time to take photos and give a proper feedback, but the tools provided by Solidworks in their 2019 version are very much usable and integrate well with a parametric workflow.

You have to tinker a bit and find the right image and settings but I am getting a very nice “rough” finish on the parts which completely eliminates the layer lines.

Almost every software that CAN texture map can also use that map to DISPLACE geometry.
In zBrush it used to be called “baking” a texture into the actual geometry.

I don’t know how well such a texture would HIDE layer lines. It would be as likely to exacerbate them in printing.

I think you would be better served to simply use a Textured paint as a top coat on the final printed part.
They make paints that naturally orangepeel as they dry.

Or- eliminate slight layer lines thru a filling coat of paint. leaving a perfectly smooth surface.

I don’t have direct experience with Zbrush; but isn’t it along the lines of 3DS MAX, Maya, and Blender in that everything is a mesh? Inventor and Solidworks are true solid modeling CAD packages. In general they use bitmaps to represent threads and knurling, etc to minimize unnecessary modeling that would ultimately slow the programs down. The ability to imprint a bitmap and turn it on/off at will would be a wonderful feature to have. In my case I’d use the bitmap during general modeling, and tell the software to imprint the bitmap during the STL/OBJ export process.

This is exactly how it works with Solidworks : you place a bitmap texture on a face, and at the end of the feature tree you use the “3D texture” feature and what it does is convert the whole geometry to a mesh, and use the texture to create recesses / bumps just like bump mapping. In all cases it’s not smart to use this feature before the end of the feature tree because it would make it hard to make modifications as you’d have to work on a mesh which SW isn’t well suited for.

@Sculptingman : as for masking layer lines, works pretty well to me ! That’s two Grey Pro images and the black one is Tough with a light mate black veil of paint. The feature size of the texture is about .25mm with the middle plane on the original face of the part.

I’m sure there’s a way to make it a bit smoother still, by using a smaller feature size and another bitmap reference but I haven’t had time to experiment more.

These parts look like you either have an optics issue or put them in IPA for too long… lol
Well done and thanks for sharing!

How long did it take you to apply the texture? It looks like something I would like to apply to most of my surfaces. Just to make them look more realistic.

Well the added texture may not be to everyone’s taste, but there’s lots of room for change and improvement. It will also make it much easier to add stuff like knurling.

I can put ‘decals’ or textures on faces in Inventor; but they don’t have a convert to mesh command…yet…to my knowledge. Ideally, I’d like to see a duplicate surface object/component made with the textures that would update when the model geometry does. In any case I hope the Solidworks texture command proves to be worthwhile.