Resin Sensor Error on every print

The original thread I opened is closed so I can’t post on there.

It seems that every time I start a new print I get this error. I seem to sort it out by taking out the tray and giving the sensor chips a dry wipe with some paper towel and re-seating the tray. Though ideally would like to know why this is happening. My only guess is after time dust gets on the sensor chips. Though don’t see how a bit of dust can affect them.

Actually saying that its still giving a sensor error. It’s worrying because it just topped up the tray with resin. So if its not detecting the amount in the tray why is it adding resin to the tray causing possible over spill?

I pretty much wasted the day trying to get this to work I’m still getting a sensor error. I haven’t used the printer in about a month and it worked fine before that. the sensor just meant pulling the tray out and pushing back in again. Though now nothing seems to fix it

Also a friend of mine has not yet updated the Firmware on their Form 2 and doesn’t seem to get this error.

Another thing I have noticed is the chip in the tank is surrounded by what looks like a large air pocket that is in the same area as the sensor perhaps? Could the air bubble be obscuring the sensor detection? 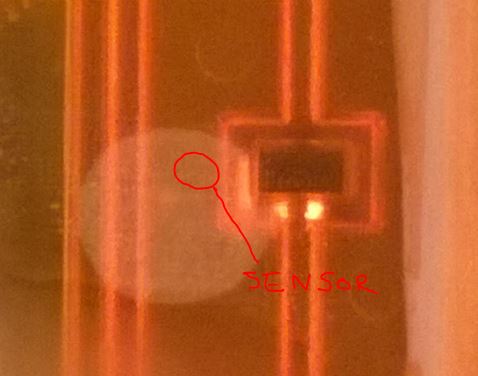 The chip on the resin tray has nothing to do with the fill level. The sensor for fill level is mounted at the back of the machine in proximity to the rear of the resin tray. It senses resin level capacitively, not mechanically. If you consistently get resin tank fill errors the problem is probably that the tank isn’t getting close enough to that sensor. Your pulling it out and reseating it is likely what’s fixing the problem, the wiping you’re doing shouldn’t matter.

I don’t know if there’s any way to adjust the positioning of the sensor. A service ticket with FL is where you could ask that question…

If the sensor isn’t sensing and you repeatedly attempt to start a print. Each time you do the printer will assume the tank is empty and it will go through it’s fill cycle. This will result in the tank being overfilled and then, should you get lucky and the print gets started, the wiper will slosh resin out of the tank and all over your printer’s guts… so you need to pay attention to the fill line on the tank and if it gets more than a mm or so above that line during your repeated attempts to get the print started, you should drain a little resin out of the tank before the print can get going.

Hey Randy, thanks for the info. I had no idea the sensor was at the back, I though it had something to do with the chip

Also as the resin sloshes around the tray it sticks at the sides. Could this be obscuring the sensor? It’s pushed in as far as it will go.

As for repeatedly trying to print the printer doesn’t fill the tank unless the sensor is working as it heats up the tank and says filling but nothing is coming out of the cartridge.

I had to print in open mode for now as I was also thinking maybe the resin might be slightly over the line though need to test next week. Open mode resulted in a very nice print, despite not using the heater or wiper. Are there any pictures of the sensor at the back? Where to clean?

So this black panel is actually the sensor? Inspecting mine there looks to be some small faint scratches near the thermal sensor. Could they affect its functionality?

That circular black bit surrounded by the blue panel is the resin sensor. It uses a capacitive mechanism to detect the fill level in the tank and shouldn’t be affected by small amounts of resin stuck to the side of the tank. There was a spike in instances of Resin Sensor Errors recently and this was corrected in firmware 1.14.21. Were you able to install that update? If so, I’ll make sure to get you in touch with a member of our support team so that we can help troubleshoot this with you.