Reconditioning a Form 1+ Resin Tray - Anyone else had any success?

I bought a second hand machine which was in a very poor state. The price was right, but the overall condition of the machine was pretty bad - resin everywhere, dirty mirrors, dust everywhere and I think I have just about managed to get it clean enough to print. The biggest challenge has been the resin tray, I didn’t want to invest in a new one before I had even tested the rest of the printer but it wasn’t good enough to even try a test print imo.

I think at some stage resin had got underneath the PDMS and cured on the acrylic in the few spots, there was also quite a lot of scratching on both sides of the acrylic. Because of this I decided to have a go at polishing the plate and wondered if anyone else had had any success doing this?

If the printer works I will buy some more trays anyway, but it would be nice if I can restore them as they become more used.

Here is what I have managed so far, any advice would be gratefully received. 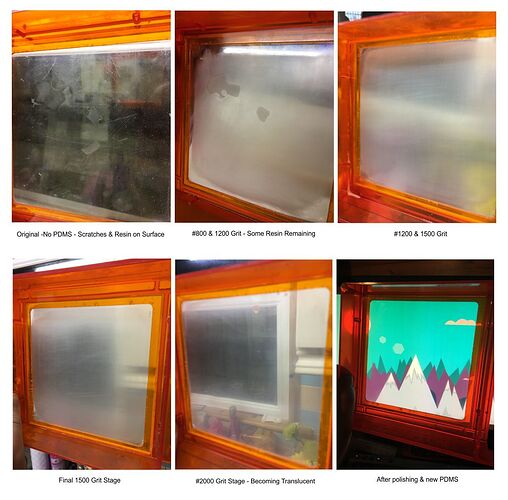 Thank you for sharing this process. I understand the cleaning and polishing process, but how did you create a new PDMS?

It’s Sylgard 184 which is currently in the final stages of curing, I measured it out 10:1 with the hardener by weight so hopefully it will be at the right level although I suspect it will need some fine-tuning on the Z height. Its all quite experimental for me at this stage as I only have experience with FDM printing.

The pre packaged PDMS product I have used is 75ml, you could also weigh the material you remove. Nice job on reconditioning the tray.