I get an error message every time I try to load it. Running on high spec system with Windows 10. Was working fine last week so very confused. Anyone else had this? 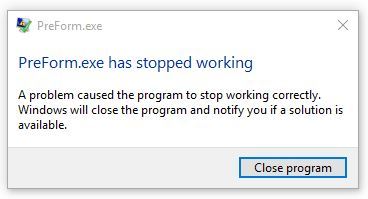 Edward - I would try a complete re-install of Preform. If that doesn’t work, send us a ticket so we can take a look with our software team.

Thanks Jory. I did try re-installing and even tried an older version but no luck. Could it be conflicting with something? I have no idea of what though as I haven’t recently installed anything.

Here is what the event viewer is saying about the crash: