The PreForm 2.12 update appears to have screwed something up with the DPI detection on some UI widgets. Check out the Internal Supports checkbox here: 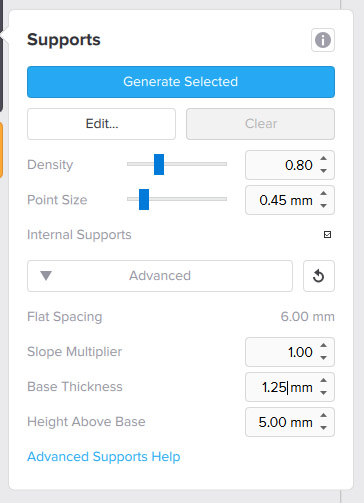 For the record, i’m on a dual monitor setup, with the primary monitor being HD, and the secondary being 4K. I’m guessing that might be the cause, since no one else complained, and it’s a relatively uncommon setup.

Additionally, i sometimes get a mesh error on larger OBJs now, and when i click Repair, nothing happens (loading stops, object does not appear). Then, when i restart PreForm, and try importing again, i get no errors, and it loads just fine (no repair needed).

Now, the mesh isn’t exactly the cleanest, but what’s odd is that i sometimes get issues with it and other times it’s fine, without anything changing with the OBJ itself.

When it happens, sometimes it happens right at the beginning of the loading process, sometimes mid-way, sometimes near the end - there’s no rule. It’s utterly random. If i had to guess, i’d guess it’s actually running out of RAM (it’s a 32-bit application still, so my 64 GB of RAM don’t have much of an effect).

Oh, and the copyright notice in the about box still says 2016.

Oh, and automatic orientation sometimes crashes PreForm.
In general, it seems like 2.12.0 is way way less robust than the previous version.

After spending about double the amount of time than i used to, getting a print out, i’m inclined to say - yes, wait for the dust to settle

That’s quite the list you have here and thanks for the troubleshooting you’ve done so far! It can be a bit tricky to identify which of these are caused by an update and which are caused by machine configurations or other anomalies. If you could forward some of these details to our support team, we’ll help to troubleshoot and it’ll be a big help in identifying the number of users affected. A member of our team will be reaching out to you over email.

Got the email, will wait for support to ask for further details.
I can provide the model too (it’s not confidential or anything), although it will take me a while to upload it (it’s a few hundred MB OBJ).