I’m already missing the old Grey 2. The mild flexibility made printing long thin parts viable. The new Grey 3 is far dryer and brittle. I’ve seen quite a few thin parts snap apart just as I was taking them off the platform.

Has anyone else experienced this issue?

I have printed 6 items so far, including the butterfly tests, and a couple of parts that have 2mm walls. Al the thin stuff seems to fail somewhere along the way. Haven’t been able to make a single successful print. I went back to a tank of Clear 2, and printed the same part just fine.

My thoughts is that Grey 3 was a bad move. All parts need a little flexibility to get them off the platform. Very bummed out the Grey 2 is no longer.

@oberst3221 I’ve found the V3 kinda has some flex. it doesn’t seem brittle to me, are you curing under uv?

I haven’t tried the other resins yet but for me the grey V3 looks perfect for my needs.

I would agree with you if my parts were thick and large enough. But remember Dudemeister and I are speaking of parts 2mm thick, this is were the breakdown occurs. I wouldn’t dare use UV lamps on Grey 3, the parts would disintigrate!

I printed a small enclosure for my small usb dac that is about 1mm thick and I can flex it. I had to just a little bit to ‘square it up’

If it helps, here is one of my support struts: 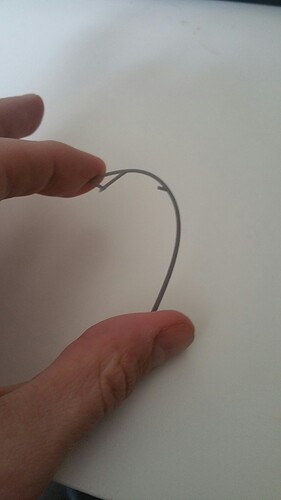 Parts printed in Grey V3 will be mechanically similar to those printed in V2. The Young’s Modulus (correlates with stiffness) is the same across both materials and the biggest difference is the elongation at break which is slightly reduced in Grey V3 meaning that you will get slightly less flexion before break but not to the degree you’re seeing.

It’s important to re-generate support structures previously used for Grey V2 because we did modify the support placement algorithm for the new material. If that doesn’t help, you should open a ticket with our support team so that we can help to troubleshoot.

There you have it, bad batch. I’ll contact support and try to find out whats going on. No way can I do that with one of my parts. Excellent. Now we’re getting closer to what must be the issue.

You guys made me hesitant to use my bottles of grey V2 for random projects. I am used to printing features and walls as thin as 0.2mm with great success. Layers on 0.05mm are virtually invisible so for me there is no reason to have an upgraded resin and have to learn using it again.

Frew,
So far I have not used the automatic support generation as I always feel it has too little supports at the start of features and it regularly misses placing supports at unsupported features. Would it be possible to give more insight(maybe in the form of an article?) in how the algorithm calculates support placement and how this differs between all the resin types?

I’d love to use the auto-generation option as it would save a lot of time and maybe this extra insight would help us understand how to orientate the parts more optimal before generating supports.

It sounds like the issue @oberst3221 is having might be related to over-curing or an issue with the machine rather than the material itself. We do quite a bit of validation to ensure that there aren’t ‘bad batches’. I can attest to Grey V3 printing much more nicely than previous versions and it’s definitely worth giving a try.

Automatic support generation does sometimes miss small local minima but is pretty reliable. Manually adding supports is always a great option if you have the savvy to know where to place them. This article and video on our support page goes into greater depth than much of the other support structure related content.

Learn something every day… Thanks!

This is interesting that you should say that FormLabs does a lot of validation to insure there are no “bad batches”, however, I wonder how much validation you do with the older machines, like the Form1+.

I too, can also attest that the surface quality the new resin produces look very good, that is, on the parts that actually make it through the print. I have yet to produce a single usable print with the new resin, at any resolution. I have had issues printing at 0.05mm, before, but when printing at 0.1mm I’ve always been able to print OK.

I tried printing the butterflys, as well as some parts for my Warhammer project, they all failed in some fashion or another. Yet, I can pull the tank out, put another tank with some older Clear v2 (that’s the only other resin I have left), and print just fine.

So the question is, how much testing was done to insure that the older printers work OK with the new formulation?

It would be interesting so see how other Form 1/1+ users have fared using this new Grey v3.

Here are some samples of my failed prints using grey v3

Here is my first print with grey V3.
Perfect unti now.
For me was much easier to detach from the build Platform compared to grey v2. Détails seems to be slightly higher. 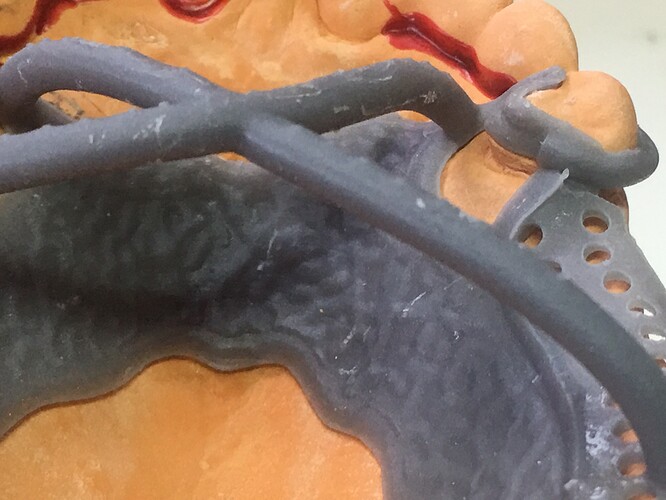 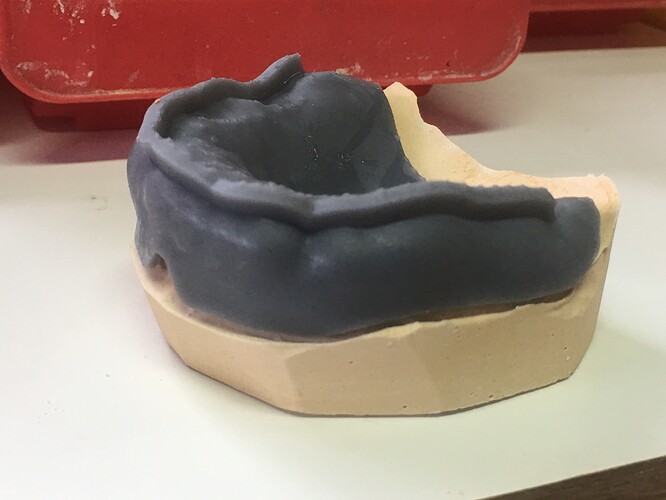 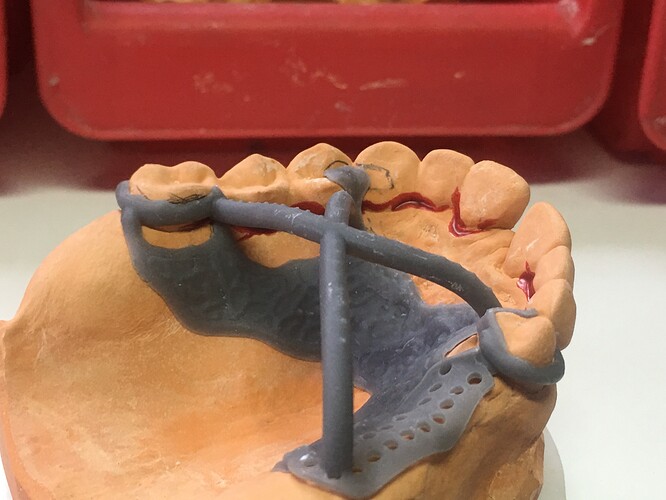 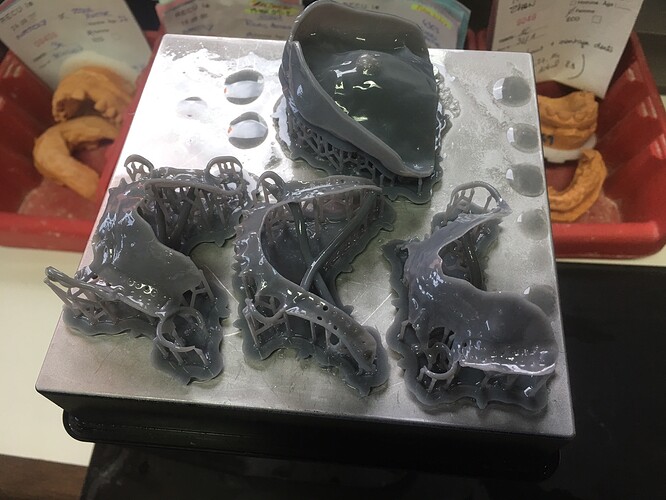 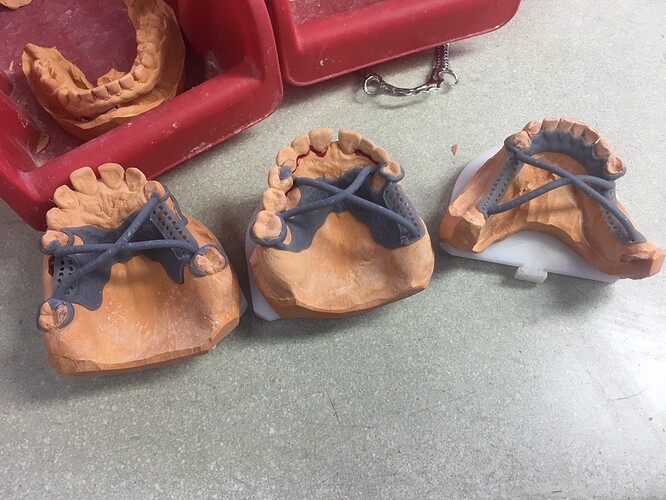 My god, are those torture devices?

Anyhow the discussion is great, But I use the printer for far finer applications. Much easier with the more flexible Grey2. I do however like how easy the supports come off with the Grey3, Both have their upsides. Would be great to have both styles for the varying project styles.

I set the supports @ 0.40mm. they snap off very easily, without braking the clasps of the dental Framework.
Just finished another print, perfect again

Those failures look like dirty optical path issues. I used to have this from time to time on my Form 1+ even with what looked like clean mirrors. More often than not there was residue on the surface of the mirrors that needed to be cleaned up.

The mirror cleaning instructions show you the best way to shine a light to see issues on the face of the mirrors, Once you clean the mirrors a few times you’ll get into the habit of checking them regularly and cleaning often.

Then explain why I can simply switch the tank for another resin (Clear) and it prints just fine.?

All of the resins react differently to optical path issues. Clear resin needs less power to print and has less issues with streaks on the mirrors. Grey and black need more power and have more issues from what I’ve seen.