Hi guys, I just received my Form 2 a few days ago. I haven’t used it yet, just unpacked it. I was checking it all out with a torch, and was alarmed to see dust on the main mirror, inside the sealed chamber.

I have put in a support ticket, but in the mean time, has anyone else had this? I’m guessing the optical window is probably removable, but I don’t wan to do it before speaking with support. There’s a warning label saying don’t tamper with the tank holder screws, but below those, I can see what looks like small hex screws holding the optical window in place.

I don’t want to use my printer until the mirror is totally clean. 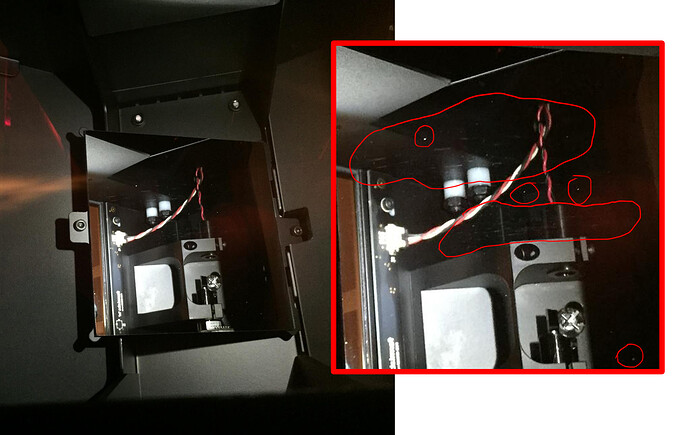 While you will want to take care of this, there’s no reason you can’t use the printer while you wait for FL to respond. The one large speck on the upper left should be avoided when you place models on the build platform in PreForm. But I would bet the printer will work fine in the other areas and maybe even where the spec is…

Yeah, I’m really just wanting a response from FL first, because, really, there shouldn’t be any dust in the internal chamber at all, and it’s disappointing to see.

If cleaning the mirror isn’t a big deal, and removing the window doesn’t affect warranty, that’s fine, but if I have to return the printer (there’s a warning label saying that adjusting the tank screws requires back to base re-calibration) I’d rather it be clean and unused.

I’m in Australia, so would rather avoid any returns if possible. It’s not my first SLA printer, I know what sort of artifacts dust can cause, and I tend to print large pieces, so avoiding areas isn’t desirable.

In my experience, FL has no problem talking a customer through a remote repair (provided it’s something an end user can do). I am sure they’ll square you away. When my Form1+ broke down under warranty, I didn’t want to ship it back so they sent me the parts and instructions for replacing them myself. They just don’t want people going off on their own and breaking things FL has to cover under warranty. So “don’t open it without our permission” is the only rule you really need to be wary of.

But there is absolutely zero risk in running the printer as-is. It’s a “new toy”, if you’re at all like me it’s got to be killing you to wait. Go ahead and use it. There’s no point in waiting, and the dust you see, while I agree is somewhat disappointing, will be very unlikely to have an affect on what you print. And you certainly can’t break the printer or void the warranty by trying!

Thanks for getting in touch with our support team! Printers shouldn’t be arriving with dust on the main optical window so we’ll want to identify the cause and work to get things corrected for you. Printing with specs on the mirror won’t worsen the issue, but the specs can potentially create gaps in your part. As @Randy_Cohen mentioned, clever tank positioning can help to avoid issue until we get things sorted out for you.

My F2 arrived with dust on the main mirror. Support (Sarah) said that the machines are not assembled in a clean room, so some dust isn’t unusual. Really? Hmmm.

She also said that the printers weren’t completely sealed so some dust could get in. Eh? What about the dust chamber test they showed when the 2 was released. That was a different and more comforting message.
I have one large speck in the middle, which worries me, plus some small ones scattered about. When I had my 1+, dust of this size and configuration meant I could expect a failure. I’ve had very few failures, and only one that needed repositioning. I can’t say definitively the failure was due to dust, But might have been.

What I expect is that the warranty will expire and at some point and then one fine day, the dust will be an issue. And then??? Preexisting documented condition gets health care, right?

Im not surprised. I thought they were way better machines as well. My resin leaked in shipping, didnt look at mirror, probably covered in random crap. The machine broke on 2nd print. The orange case cracked in 10+ spots on 2nd print. 6 days and nothing, was told id be helped, support team on it, havent got any tracking, nothing in mail, no follow up. I guess thats how they squeeze more money out of people…if you pay an extra $500, they will help. If you dont…well, screw it…they get to it when they get to it.

We want to make sure that the machine functions as you would expect and upon hearing that there was a resin spill and other issues with your printer, our team sent you a replacement almost immediately - within about a day of your original ticket. Let me know if there are issues tracking your replacement printer and I get in touch with our team and look into that for you.