I printed a jig last night using V2 Black resin (expires in a week) and the middle left of the print looks as if it melted and compressed? I’ve been having issues where prints detach from the left half of my print bed, still not sure why, but what could be the cause of this issue? Surely nearly expired resin would not cause one print area to fail. Also my print tray is brand new, only one print before and never where this print was aligned, and my optical surface is untouched. 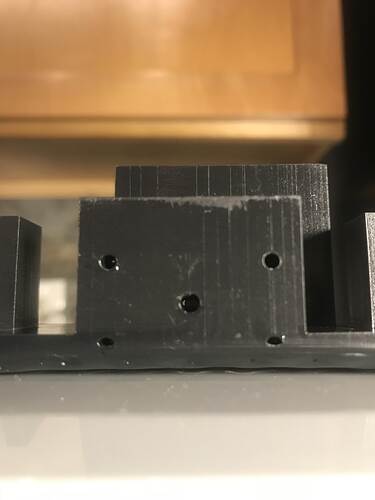 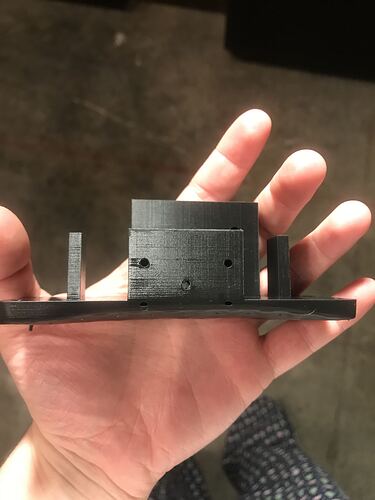 How was the object oriented? If it was printed flat on the platform then that looks like it would have problems with a large surface area which would put a lot of stress on the print as it tries to separate after each layer. If you used supports, then it could have needed more support.

The object was oriented with the base bottom flat across the build platform, but I used supports and the printed base layer too. But would it still be stressed due to the orientation even with supports?

But would it still be stressed due to the orientation even with supports?

I would wager that it would, and that printing with a 5-10° angle relative to the BP is a good starting point to solve this.

While I do sometimes print directly on the BP, i certainly always avoid surfaces parallel to the BP when I’m using supports.

If you had it oriented horizontally with supports then what happens is that the first layer of the object will be very large and have large sections of unsupported areas and when it slides the tray and lifts up the layer will fall apart. That’s why you angle parts so that it starts from a small point and each layer after that is only a little bit larger than the previous layer.

Yes I printed this horizontal to the build plate. I never realized that you want to usually angle your prints.

Yeah, from this forum I realized I shouldn’t be printing parallel to the build plate (which is what I have been doing so far). I never realized why that would make such a difference

You should have a look at the different articles on Formlabs’ website, as well as download their whitepapers. All this is very well covered, from materials and orientation, layer height choice and so on… it does take a bit of time but it’s well worth it to avoid bad habits.