I want to share an experience with you guys out there and want to ask two very specific questions. For those not interested in the experience, here are the questions:

OK, here comes the experience: I bought the Form 2 mainly to print all kinds of variations of geodesic spheres (see for instance the Montreal Biosphere as a well known example: Montreal Biosphere - Wikipedia). Not only for aesthetic reasons but also to study their strength under different settings. So I will put these beautiful polyhedrons under pressure tests and probably destroy some of them. Final target is the largest and lightest geodetic structure. But to do that, I need reliable and reproducible output of the geometry that I give the printer.

One of my problems has to do with “largest”: Since we have a built volume of 145mm145mm175mm one might think that we can build structures of this size. I was under the wrong impression that we could print a quadric of exactly these dimensions (if we were stupid enough to waste three and a half litres of resin on a brick).
So I thought it should not be a problem to print a geodesic sphere with 70mm radius. There should be enough room to have supports around that. OK, Preform does a good job to keep us from having any printable geometry sticking out of the print volume, and I managed to get a sphere with 68mm radius printed – exactly once. Photo attached, because of my second problem, see below. The second and all further tries my Form 2 went into the error “Motors jammed”. There were no obstructions, the resin bath had no jamming parts in it, ignoring the error would not work, the print platform would not go up again and the wiper could not move (which created the actual error) since the build platform was in the way. Restarting the print – same error. I contacted support, they were able to reproduce the error on the printers in their lab at HQ with my print file. Their explanation: My base plate – which had a diameter of 144mm – is too large and this creates too large forces during the peel process. I cite:

This is due to the raft of your model putting too much stress on the printer during its peel process.
If you were to print a massive cube of 145145145mm, the print would fail in the same manner and you would risk damaging your printer. The motors in the Form 2 were never designed to be put under that much stress.
I can confidently say if we tried this print on any Form 2 at our office, it would fail in the same manner.

I find it quite interesting (and not at all OK) that we can give the Form 2 a print file that destroys the printer. Transferred to a normal office laser printer this would compare to: “You can print reports and you can print photographs, no problem. But if you attempt to print the Bible or the Quran then you destroy the printer”. WTF???
Why would anyone build a printer with motors that are not strong enough to peel the cross section of the build volume? I tried to get the information what the largest print is that we can create – no quantitative answer. I think this should be quantifiable, no? If any layer in my model has more than xy square centimetres area then I am in trouble. I would like to know this xy number. So, has anyone run into similar problems? What was the largest printed cross sectional area that you guys have ever produced? I am reliably able to print spheres with 65mm radius (that is: 69mm base plate radius). Anyone larger?

Second problem, minimum feature size. As you can see my geodesic sphere consists of small diameter cylinder struts. On the outer layer these struts form hexagons and pentagons, the inner layer forms triangles, between the layers there are struts connecting the inner and outer layer. Like on the Montreal Dome. Every corner of every hexagon should be connected to the corner of a triangle in the inner layer sitting radially inside the centre of the hexagon. As you see in the detail photo, my Form 2 omitted many of these connecting struts (and also some of the struts forming the hexagons on the outside). I did not count how many exactly, but some thousand struts of the 30720 targeted are missing. My print had targeted a strut diameter of 0.5mm. I tried strut diameters of 0.7mm and 1mm, still some struts are missing – less, but still some. Going much larger would destroy the purpose of the model – I would then need to go down with the resolution of the sphere (less triangles and hexagons/pentagons on the surface). I can do that, but before I waste more time and resin with testing I thought perhaps someone of you guys has an answer? What is the minimum feature size for an arbitrarily oriented cylinder?

And here are the photos: 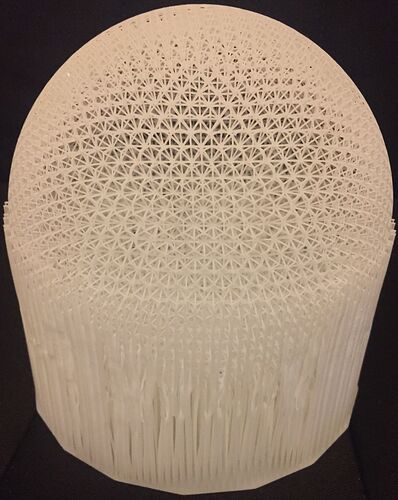 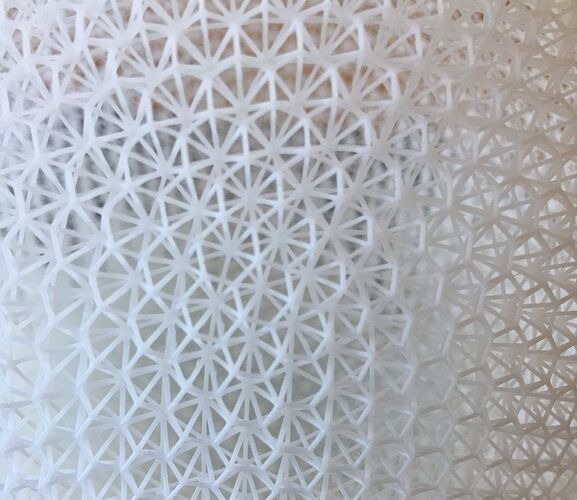 I wasn’t aware that something with that large of a volume would cause too much stress to print. When they originally presented the Form2 that they talked about how it would be able to print objects like that which the Form1 could not and they even had a photo of a very large object that they printed successfully. I think I also remember them doing a test of printing something at the full print volume.
Something that’s an issue with the software at the moment though is that it doesn’t necessarily keep the surface area of the base of the supports as small as it needs to be–for example if you print a ring you would expect a hole in the center of the base since there’s no supports there, but currently it will fill that in. You can try designing a base and supports that would create smaller layers in your 3D program rather than using the supports in PreForm. You would then just print the object directly to the platform since it would already have supports.
As for smallest feature size–the smallest size is determined by the size of the laser point, which I think is like 130 microns. However, you wouldn’t want to print something that small since it would probably fall apart. In your case the issue is that you’re creating a large structure of thin parts and the longer a thin part is the more it will flex during printing which may cause those thin parts to fall apart. Because of how some of those cylinders are oriented it’s likely that some of them will be very weak and that’s why they aren’t coming out, they would require extra supports for them to print.

Oh, I forgot to mention that I programmed the geometry of the base plate and of the support struts. It would not make any sense for PreForm or any other software to do that, because in the geometry of these hollow spheres there is no way to cut out the internal struts. You want to know exactly where the struts are attached (in these prints we talk about around >3000 struts attached to the corners of the outer layer).