How do you use your Form 2 leveling tools?

With the Form 2, we ship two leveling tools, plastic discs that are used for rotating the rubber feet in order to level the printer. These leveling tools are shipped in a plastic bag with a label describing their use. We’d like to get some feedback from Form 2 users about the tools and their use. There are four questions below, but feel free to give any feedback you like. 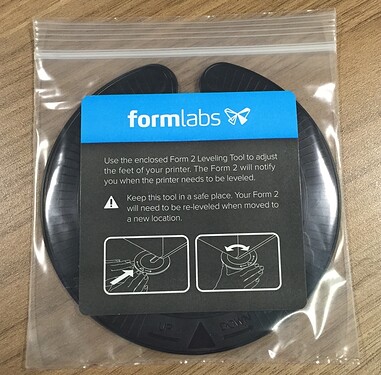 I’ve moved my printer way too many times. At least a dozen.

I use the leveling tools every time and sort of wish there were 4 of them. I store them on the front feet of the printer so that I never lose them.

If only there was some way a person with a form 2 could get a couple more tools… Can you post a model?

I have only used the tools to level the Form 2 when I first received it. I used both tools and thought they were an ingenious addition to the printer and I was glad that they were included. I store the tools in the original bag for the next time I need to level the machine. I believe I will need to move the machine a few times before it resides at its permanent location. Without these tools the process of leveling would be less intuitive. They were an unexpected pleasure and demonstrated the thought applied to the design and implementation of the Form 2. Well Done!!

I also add additional soft silicone bases on the feet because I use the printer in Japan where earthquakes and tremors are common as a further safety measure. (The manufacturer claims that it can handle up to level 6 on the Richter scale.)

I just keep checking the level with a spirit level so the 2 leveling tools attached have not been used because the level function never appeared.

I hope there is a way to manually open the level calibration tool rather than relying on the software.

Thanks for all these responses so far!

@SGuber I’m putting together an STL file of the leveling tool. I hope to have it posted soon.

@aj_edi You want the surface of the resin tank to be level, which may not be parallel with the top of the cover. The bubble level on the UI will tell you which feet to raise or lower.

I just received my printer this week. I found the leveling tools to be very helpful. I received two but agree 4 would be ideal.

I’m curious how well their standard resins would hold up if we printed the leveling tools.

The leveling tools are fine as they are. However, as with all things, improvements can be made.
Finding a place for little used tools is always a nuisance. In this case, I would consider things like a special pocket in the printer itself, or to redesign them so that they integrate seamlessly with the rest of the printer, voiding the need for them to be separate pieces altogether.
I find the application very easy and fast to use as it is.
Happy to provide feedback.
Take care,

Finding a place for little used tools is always a nuisance.

Perhaps they can design it to be part of the feet, with the dial part small enough not to add to the max width/depth?
Or another idea would be to design it like a furniture coaster the foot sits on, and again small enough it does not get in the way, but big enough to rotate easy.

Thanks again for all the feedback!

For those of you who want more leveling tools, you can now find a link to the STL of a printable leveling tool here. I recommend orienting it as in the picture below and using default support structure settings—this consumes about 40mL of resin. Use any general purpose resin, with a 100µm layer height (for a print time of about 5h30m), and post-cure after cleaning. 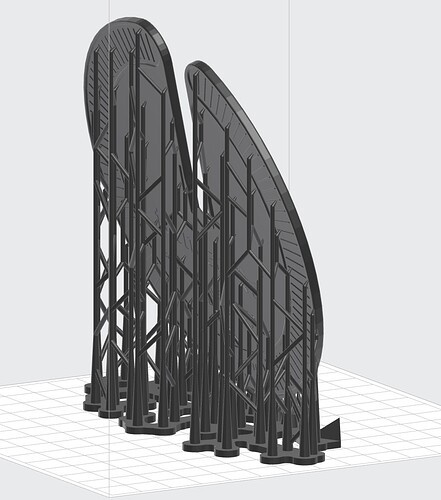 Thanks for the STL file. I will give it a try when I receive my new cartridges that I just ordered. I notice the orientation of the model in the picture is diagonal. I am new to 3d printing with the Form 2. I have printed 7 times so far and all have been a success!

I’ve been printing thin models, similar to these leveling tools, though not perfectly flat. With each successful print, I’ve been orienting my models more and more perpendicular to the build platform in attempts to reduce the supports necessary to print them. What is the reasoning for not orienting the leveling tool perfectly perpendicular to the build platform? I imagine that would cut down on the support material significantly. Can you explain your motivation for suggesting this angled orientation?

Thanks for the STL. Now I can have one per foot.

growing it flat should be smoother. but it would be taller so it may take longer

Check out this support site page for why it’s important to print flat parts at an angle of at least 10º-20º.

As for why I tilted it 10º from vertical rather than 10º from horizontal: resin volume and fewer support points.

You might wonder why a part that is only 20mm tall would take the same time (and require much more resin!) as a part that is 62mm tall. When printed nearly horizontal, you generate a raft with a large surface area. As a result, this large surface area use more resin (rafts are by default 2mm thick). Additionally, the early layers have a higher exposure in part to ensure proper adherence to the build platform. If you have a larger surface area for the early layers, it will require more time.

My Form 2 is due to arrive Friday so I have not tried out the tool but it looks useful. Rather than take 5 hours to print one I am going to print one in 1 hours on an FDM printer and see how it works. I suspect I will need to scale it slightly the second try to get the nut opening correct. I took the STL and sliced it down the middle at 1.5 MM and then scaled it to 3 mm tall.Form 2 flat bottom tool.stl (4.7 MB)

I flattened the bottom to be able to print it flat without support. Scaling it made all the surface details twice as tall. Overall dimensions are the same. I figured it was worth a shot.

I will let you know how it works. 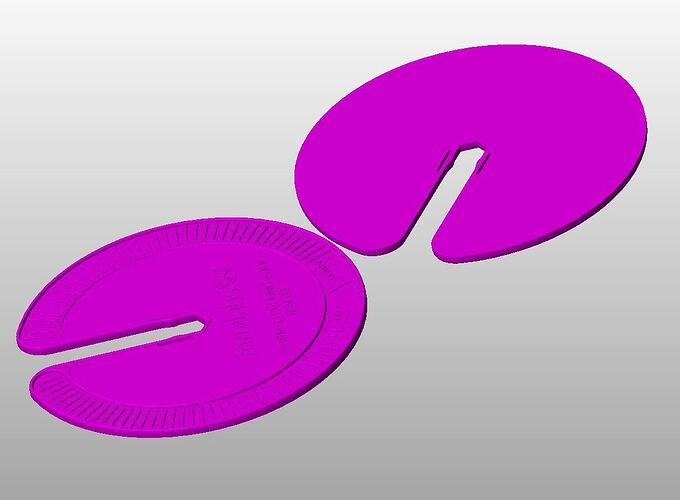 I only received one tool so the STL file posted is very helpful. The Level system on my machine is not perfect. As per another post i read above, we noticed that on occasion, the machine would ask to be levelled at the start and when we had finished adjusting, the bubble was perfectly centred but the machine was obviously not level by eye ( Resin in the tank and gaps under the machine on a dead level bench ) Then when the print is started after a few minutes it would pause and request re levelling and we would have to undo the previous adjustments to which point it would then look level and complete the print. This also causes a line across the finished print where it paused! I’m pretty certain temperature is a factor as every time it has done the “false” level the room was cold ( start of the day ) but haven’t had the time to confirm this.

I just worked out that in the Grey or Black resin printing one of these things will cost over £50 thats a tad expensive. If you did not receive 2 in with your Printer it might be better to ask Formlabs
support to drop one in the post