Has anyone encountered a print too large?

I’ve encountered a situation where I had to reduce the number of objects printing because of preform crashing- is there a specific memory limit? Preform has no issue saving this file but won’t send it to the printer.

The model in question requires 32 of an identical part- I had to cut it down to 16 to get it to actually print, 24 failed as well. Would it be best to add multiple instances of the same object to a single STL? I’ve never encountered this before- with my form1 I’d print 60+ parts at a time without any issue.

They don’t fit, as you can see. But PreForm had no trouble generating them…

I think your objects are too big. Instead of file size, what’s the polygon count? 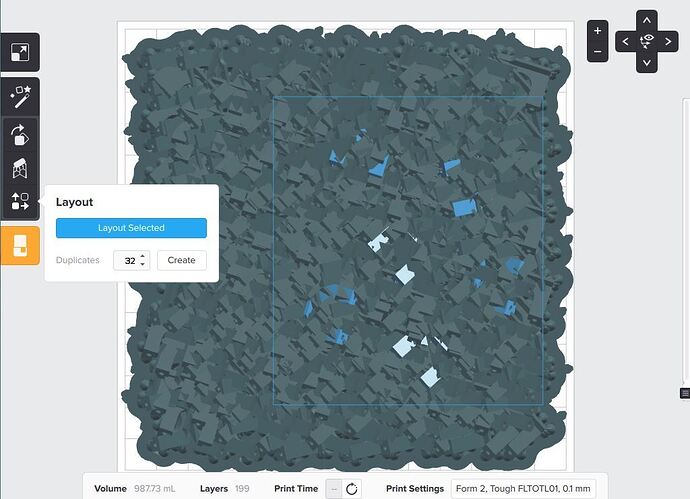 Likewise. 62MB filesize/1.3M polys, 20 repeats fit on the build plate (although the bases intersect) but Preform terminates abnormally when sending to the printer. I’ve asked if there is any debug logging available to help diagnose, but if the sw is having trouble with the slicing or upload stages due to size that could be flagged before trying.

Preform had no problems until sending the parts over to print just as espy described. It would be helpful to know what the printer can handle so I can design around the problem. It is not the sort of thing I welcome once manual supports have been generated.

That would sound like the memory of the printer is getting full. If you have one object at 1.3million polygons and you’re trying to do 20 copies then that’s probably more than it can handle.