It could be sls but have my doubts due to the costs of the lasers for them.

Are you referring to CO2 lasers? Because apparently you can still accomplish SLS with diodes. Check out these guys: http://sintratec.com/ Their desktop unit (kit needs assembly) goes for $5500, very comparable to FL pricing… Maybe SLS isn’t totally out of the picture?

The teaser picture could show the unit upside down as well

If anyone else was curious 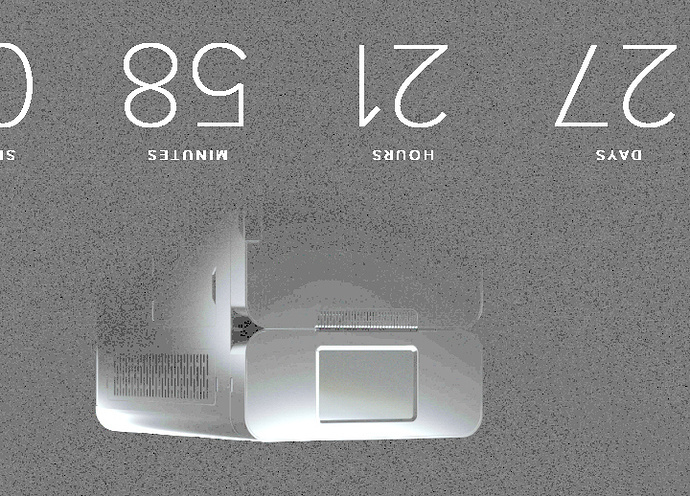 I don’t think a co2 laser would be suitable for that. Typically co2 lasers don’t react with metal. In order to cut metal with a co2 laser you need to blast oxygen at the point of contact and it works like a cutting torch.
A Yag laser would work with metal but like a co2 they have a fairly limited life expectancy.

Most likely Fiber lasers are used for metal and their costs are horribly high. Markforge broke the price boundary with theirs at $99,500. It also isn’t a table top machine.
Keep in mind if it is an sls, the materials are extremely expensive.

The base cost from EOS for their Nylon is 60 Euros for a litre, but only 50% can be reused when filling the machine, but the other powders are more on a par with old SLA resin costs.

the other sponsor of the event is Desktop Metal they make metal printers…
maybe a smaller version of their current desktop printer.
fuse… metal…
the control screen is a similar shape… maybe. 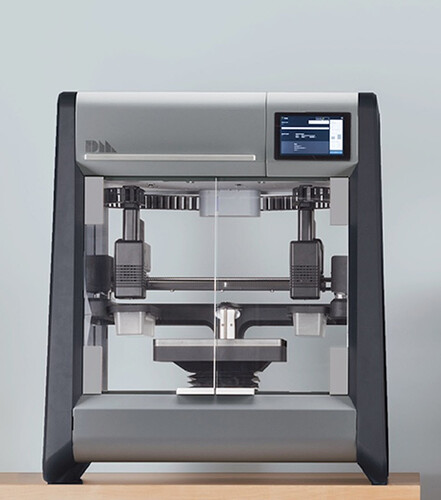 I’m hoping the Fuse 1 is an SLS, I think it’ll be quite expensive if it is though, at least three times the price of the Form2.

Completely agree. SLS is the first thing that crossed my mind, and the name fits the SLS process too.

SLS has many disadvantages when compared to SLA. I think even in a smaller machine it’ll be more difficult and cumbersome to use, running costs might be higher too. Density and surface finish aren’t all that great… however, you can print shapes an SLA printer couldn’t because the unfused (see what I did there ?

) powder can act as support material for the part. The range of materials available is also very different from SLA, my guts tell me it’s much easier to print and cook ceramic parts in SLS than is it in SLA but I might be wrong on that one.

Hell, maybe they’ll make a metal SLS printer ! Titanium is definitely an interesting material for medical implants particularly dental ones, and the SLS natural surface finish might help osseointegration (disclamer : I’m not in the field as a dentist, but I did work for a few years at one of the leading dental implant company so I’m allowing myself a few educated guesses)

There about to release a ceramic resin my guess is its a high temp kiln for porcilin the partial pic looks a lot like kiln.

Perhaps they are coming out with a resin with metal powder in it. You would then fire it and burn out the resin leaving a metal part?

Not likely, but possible.

That would be pretty cool, though I’m not sure how much shrinkage (and warpage) there would be in that process.

I’ve actually printed with aluminum powder in clear resin. This was with my old Form 1+ and before open FL. It worked for small prints and was actually not bad on the PDMS. I doubt that it had nearly enough metal in the print to sinter after the print.

Aluminum worked because it oxidizes almost instantly turning that dull grey color. The laser doesn’t scatter as much with a dull material. Stainless or anything reflective would probably not print well. Maybe tungsten? With the wiper running on a Form 2?

I still think that this will be a small SLS machine for plastics only. You must have an inert environment for metals and that’s a consumable that isn’t a “home consumer” item. The laser power for plastics is actually fairly low so there isn’t a need for the big clunky Co2 lasers.

SLS hybrid solution based on Formlabs SLA UV laser engine (if its not broke don’t try to fix it) components are tried and tested.
UV activated fusing of UV sensitive resin particulates (possibly dry until activated) within a powdered scaffold matrix of something like fumed silica’s or similar structured materials .

Just surprised it’s not nearly the 26th of September yet

@KenCitron how about metal binding jetting ,would that be a more feasible route to printing metal?

@FredB that’s pretty cool! I am researching the possibility of adding Barium Titanate or Cacium Copper Titanate powder in a clear resin to create a high dielectric resin composite, since they are both oxides the laser shouldn’t have too much trouble I assume. How did you mix the power into the resin? Did you use the clear resin from Formlabs?

I never thought of the Fuse 1 possibly being a kiln, I guess I should hold off on buying a kiln just to be safe.

@Marc_Collinson is what you’re describing feasible?

I tested that out over a year ago and it wasnt very scientific. I had some amuminum powder (used for casting resins) and Just mixed some into a 100ml or so of Formlabs clear V2 resin. I didn’t measure the materials.

I only ran a print that was about 15 mm high and there was a little settling of the material towards the end of the print.

@ FredB I wouldn’t tempt anyone to play around with metal powders and energy sources even low powered one’s!

If it was a laser based printer that handles metal then you need to either fuse a carrier of some sorts OR actually melt the metal. An IR laser might be possible and a little less money but usually lasers of that power can be somewhat dangerous. Fumes are also an issue with lasers that cut or engrave. Even if your burning metals you can actually suffer flu like symptoms called metal fatigue when your body is absorbing those fumes. Typical fume extractors start around $1200 or so?
My little 40watt co2 can make an awful stink so I limit what I cut or engrave with it.

Curing a carrier and using specially formulated resins like the ceramic filled is a cheaper possibility but like the sls printers that use a polymer carrier, there is shrinkage involved if you were to burn off the carrier so making accurate parts is a challenge.

Or lost wax without the wax, print directly the female shell moulds in investment materials burn out fuser/binder/resin and cast into? Or has someone already done this with the ceramic material?

If this is an SLS, then the teaser photo is not upside down. Because the laser will be above the build platform as opposed to SLA from underneath. SLS brings more safety hazards. The very fine powder used can easily become airborne and dangerous. And it would be hard to force people to use respirators around it. Also SLS need more room for the wiping mechanism, so the printer will likely have much smaller platform, probably just big enough for jewelry; little pendants, rings, and earrings.
Like someone here said, this could be a larger unit intended for small production, used in a controlled environment and not a desktop 3D printer.

I don’t believe it would be a 3D scanner, they would name it something else.
It may be a unit that helps join larger parts together, that were split for smaller SLA platform.

I just noticed this morning that there is currently a 3 week lead time on a Form 2 as well, putting it right after the launch of the FUSE 1.

Just a thought from the value engineering perspective but also as SLS works better for larger components due to the surface finish restrictions.

It may be a unit that helps join larger parts together, that were split for smaller SLA platform.

While that is definitely interesting, I don’t see why it would necessitate a whole new machine when the Form Cure can take care of that easily if you pre-fix the parts together with a 5$ 405nm laser pen. How would you imagine it work ?

Just a thought from the value engineering perspective?

If I understand correctly your proposal, the only difference would be that the laser shape would not vary like it probably does with a mirror system. The huge downside IMHO would be that it would be much much slower, just look at the speed the laser point is moving across the tank and imagine a mechanical device making the same movements.

An alternative that would have kind of the same advantages without the speed downside would is the DLP technology, but it’s currently less precise because projector resolution is a limiting factor (from what I heard, haven’t researched it myself TBH)