Formlabs give us a form3 with a bigger print volume

Hey everyone just been dreaming today. Thinking how awesome it would be to have a form3 come out with a larger print volume. I know its a pipe dream but I’m curious what your thoughts are. It seems like all the new DLP printers or SLA printers that have been released recently all have the same or smaller print size as the form2.

Just My late night thoughts flowing into the forum.

Carbon M2 and some even more expensive printers from Stratasys and 3DSystems have much bigger print volumes. So they do exist, not in the prosumer range though.

Given the good experience we have had with the Form 2, we would definitely buy a Form 3 with bigger print volume. However i think for now that segment is being occupied by the upcoming Fuse which will have a bigger build volume and thanks to the packing possibilities much more of it will be usable in one single print.

We will definitely consider a Fuse when (if ?) it gets released, given that it’s about 10x cheaper than a Carbon DLP printer. SLS isn’t the same as SLA/DLP though, and in that way a Form 3 definitely has a place.

The print volume is certainly something important, but in my humble opinion, a real progress would be that the resins eventually become reusable, for obvious economic reasons.

Yeah, that would be great for a lot of applications! It would be awesome if printer could be 4X larger on base and 2X on height, but with a kind of laser modular system, where you could use the right size space/tank you needed. That would increase volume without increasing printing time. Some industries would pay for it instead of an existing expensive large volume SLA printers from other brands.

appreciate all the replies,
Yes I understand the bigger companies have the larger printers but I am specifically talking about prosumer market.

I had a pre order out for the Fuse but it is more for batch making parts which I don’t do much of .

Casper1050 that would be amazing I cringe at the wasted material in support for most of my prints.

I think there is a limit to the size that the laser can print–that’s due to the angle of the laser where it will change the shape as it angles to reach the far edges of the print space.

I’m hoping more for some improvements to print quality, mainly to reduce the effect of indirect curing which is the main problem with SLA printing.

Interesting that makes so much sense

There are no size limitations at all. Not to sound like an ass, but the resin tank sits at a fixed height, that is where the laser is passing through at all times, the only constraints are the machines, the height can certainly be larger, as well as the X and Y. They can 100% get it done, there are some insane machines on the market capable of an enormous volume

The only other machines I know of that print larger use DLP/LCD. The laser isn’t perpendicular to the bottom of the tray so some angles will change the laser spot to an oval, a larger print size will make that worse. It might be something the software can take into account, but that would also affect print quality(a smaller spot will printer better detail). It can always be made taller which won’t be affected by that, but people probably want the build volume larger in all dimensions.

I see what youre saying, I do commend formlabs for that very thing though, When I have a large part all the way shifted to the edge of the platform performance seems equal. But yeah obviously with the way their optics and refkecting mirros work the system wouldnt be efficient past a certain constraint, but maybe they will improve that for the form 3 The form 2 was an insane improvement on the 1+, so I have high expectations from formlabs going forward with future releases.

As others have noted, the laser technology limits their x/y size because the laser would bet distorted as the angle increases from the center. That being said, I am thinking it could be made X times as big with X times the number of laser systems. Essentially, you would pack a grid of lasers, galvanometers and mirrors in the system. Height is only limited by how tall the system is built, withing reason. People might say, well how do you coordinate things to keep from overlapping. I say its quite easy. The current system has very high precision as to where it solidifies and where it does not. You might not even need extra laser, just a few extra fixed and moving mirrors to direct the light to 4 points before it is sent to the 4 big mirrors if you had a 4x system.

Speaking of Z height I wonder if the peel mechanism would effect the print the taller the print volume.

Here is a graphic view of how I think Form could make a Form 3 with 4 times the xy size while using one laser, outside the mechanics, it becomes an easy software problem! . 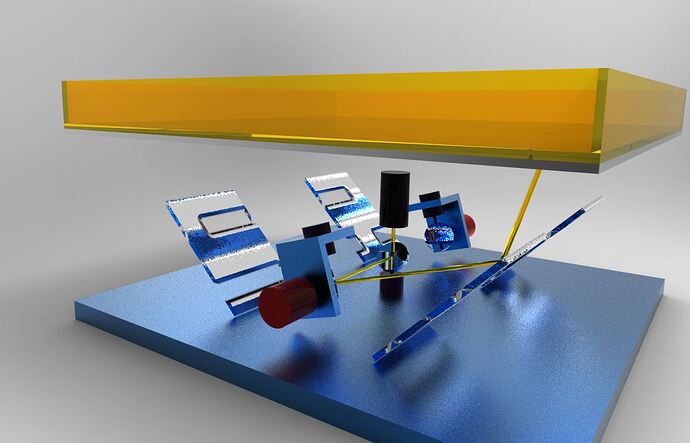 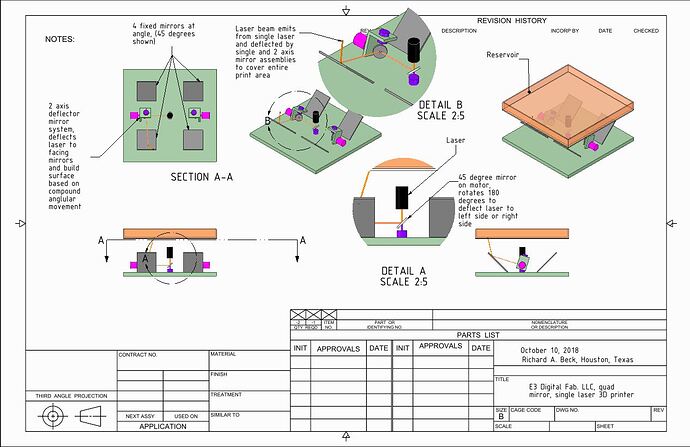 16 times a form 2 just needs 4 of these working together and a larger tank.

Exactly… one thing that could considerably expand the X/Y build volume at the expense of a taller machine is increasing the distance between the tank and the main mirror, so you get smaller angles. Maybe this hypothetical machine could be designed as a stand-alone solution, instead of a desk-top machine, thus keeping the working height constant and maybe also offering storage space below the machine.

The main patent related to SLA technology expired a few years ago so Formlabs is probably good on that side. Now maybe 3DSystems is trying to maintain a hold of the “stand-alone industrial-grade” SLA printer segment but usually that kind of legal protection is easy to work arround.

It would not be difficult to calculate but augmenting the distance between the 45° mirror and the tank will also greatly increase the precision necessary on the galvo side, which may be a bottleneck price or calibration-wise.

Not to forget the printing time when increasing the XY size. This goes up significantly.
For larger printers, I’d still vote in favor of DLP or LCD solutions. 4k tablet LCD screens are becoming cheap and 8k is expected soon too. I’ve seen prints with better surface quality than the form 2 using these techniques.

That’s true of course - but you wouldn’t have increase the build size as drastically as mentioned, for many of the applications we have an increase by ~70% in XYZ would make ~98% of the parts printable in one go that we have to glue together right now. Time would also not be too much of an issue, as long as the machine prints reliably.

The main patent related to SLA technology expired a few years ago so Formlabs is probably good on that side. Now maybe 3DSystems is trying to maintain a hold of the “stand-alone industrial-grade” SLA printer segment but usually that kind of legal protection is easy to work arround.

Unfortunately, not neccessarily if I understand the anglo-american legal system correctly. As far as I know, such a settlement is independent from the patent - so there could be, for example, an agreement that for xx years, FormLabs won’t market a SLA printer over a certain build volume…