Formlabs give us a form3 with a bigger print volume

I think if they want to increase the x/y print size then they’d likely go ahead with multiple lasers, might be significantly more expensive though.

The peel forces need to be taken into consideration when going to large x/y and even taller z. Dealing with those forces isn’t a gimme. There is also a certain point at which it is no longer a desktop machine, but I assume people who want the bigger platform would be okay with it not being desktop size.

Depends on how big your desk is

I’d rather they sort the multiple manufacture, reliability and consumables problems they have before they go charging off into the future. I am very pleased with some of the results from my FL2, but it has been a journey of mostly entirely avoidable problems, leading to a lot of frustration and delay. I would be very reluctant to buy another machine just yet, especially a bigger and much more costly one…

And now we have a load of cartridges loosing their nozzles and emptying themselves into the printer. I rest my case…

The cartridge nozzle seems to be the biggest issue with the Form2 system, that’s probably the first thing they’ll focus on.

I think there are two areas they should concentrate on and neither is a bigger printer. First increase the resolution without necessarily increasing the build volume and second get a castable resin or castable wax resin that works reliably and isn’t really tricky to use. Oh and an ABS substitute resin too.

Sounds like for your applications, a DLP based printer would be better, actually. What you “think they should concentrate on” depends very much on your use case - for me, as an engineer, the current resolving abilities are perfectly fine as long as dimensional accuracy is good, while I very often wish for a bigger print volume and a high-temp resistant tough resin. For you, resolution seems to be very big on the wish list, but print volume is not a priority.

Resolution isn’t as much of an issue, I don’t find a case where the Z layer height has too much stepping. And of course there isn’t any stepping on X/Y
It could be sharper, which would require a smaller laser spot but that would also increase print times.

unless what? the laser can move faster heat up quicker? there is definitely something that could help with print times in a mechanical sense

There’s going to be some effect on print times with a smaller laser spot, they could try and increase the power to compensate and then move faster, it’s just something they have to figure out with engineering.

Reliability. Beyond all other things. If it falls over and doesn’t print, or worse makes a dreadful mess of itself, any other ‘improvements’ are entirely irrelevant.

Did I mention Reliability?

the primary limitation on the print volume is not related to the laser path that can simply be made longer.
The primary limitation is that the model you are building is HANGING upside down, from a plate- and has to be peeled off of the tank floor with each layer added.

This means the Lever arm applied to the hanging model increases with Z height. It also means that the Supports and the model are being subjected to greater tensile forces as the size of the print increases.

As you increase the build volume, you have to have a material that can withstand all these forces WITHOUT stretching or deflecting, and without shattering- you Also have to be able to get the print OFF the platform when done without breaking it, or having to use a jackhammer.

the result of all these various balancing acts is a strict limit on total build volume.
The Carbon printer achieves a 12" volume in ONE dimension, by only having a 3" dimension in another axis.

Larger volume SLA printers are IMMERSION printers… in which you are relying on the model being submerged in a vat or resin, and are NOT placing peel forces on it for each layer.
The resin vat supports the weight of the model better… and the model is built from the bottom up so the supports that are necessary are simple columns in tension, not cables swinging from an overhead.

Given the frequent complaints about how much a liter of resin costs, I can not imagine most of us would be keen on the idea of having to buy resin in the GALLONS, just to keep the vat filled. And would really not enjoy the problems of having to clean and filter that much resin every time we got a failed print. Moreover- switching to other types of resin would either require swappable vats- every one of which would require gallons of resin to operate… or the user to drain, clean and refill the vat with gallons of resin just to switch from Clear- to Tough.

Suffice it to say- wishing for a larger volume is all well and good- but there are good reasons why you have not seen some competitor field a Printer like the Form 2 with twice the build volume.
chemistry and physics have their limitations.

They only make them even larger than that:
https://photocentricgroup.com/lcpro/
(10 times the volume)

Them and others are working on even larger models.

And yes this is a bottom-up printer and no they do not use laser. It’s the laser causing the amount of adhesion to the peel layer. LCD/DLP doesn’t suffer from this as much and peel forces are much lower. I know theoretical pixel artifacts would be the response here. Only a very small amount of customers need this amount of detail on such a large printer(right tool for the job thing).

This is what happens to the cheap laser pointer spot size on large build surfaces: 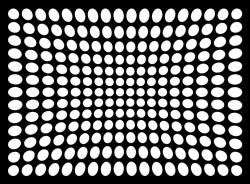 Sure, we can compensate that with good optics(adding a F-theta lens for example), but that’s a costly business.

(and again, please stop yelling in your posts)

All very true and valid points. Doesn’t mean it’s not doable just like before the form 1 came out Sla was usually just for commercial machines and it was brought to the desktop by Formlabs … I’m sure they are working on something with more volume

Ah man, if they came out with a Form3 with larger build volume, i would buy one ASAP. if they could keep the price under 6k, that would be a great selling point.
the fuse is good but to expensive for us so a printer to split the difference would be good to have.

It would be a realiabilty nightmare, a peel force nightmare, a calibration nightmare, and at best, you’d get objects with very visible overcure between the volume sections, or gaps (or perhaps both).

No, FormLabs, please sort out the issues with the current machine and materials before you go galloping off into the future!!

I agree… in addition, there are the leverage forces of the peel action- the taller the build, the more lateral force is applied to the build with each peel. And the simple fact of AREA- the larger the print are, the harder the suction to overcome on peel.

However- i i think a very high resolution DLP with sufficiently bright and uniform UV sources could be a workable large volume shallow tray SLA solution ( as opposed to tank immersion system that are available in rather large sizes- but that would make using multiple resins unaffordable.)

at present the big problem with affordable DLP is that their light sources are so weak that they take 100 seconds to expose a layer- which is slower than a Form 2.

The real promise of DLP will be fast enough layer exposure to make formerly day long prints only take a couple hours.
Coupled with a vat system that allows for a paper thin release film that can be replaced for a cost similar to a paper towel.
I can envision a vacuum formed thin release shell that fits inside the tank. Good for perhaps a few prints.
That can be simply lifted out, replaced with a new one, and the remaining resin in the old insert poured into the new one.

Or even some form of durable glass that does not get burned by the projector and can be readily cleaned without damaging the vat.

Or maybe they can develop something like Carbon3D where the bottom of the tray is oxygen permeable and creates a layer of resin at the bottom that doesn’t cure which allows for the layer to print above that and it can print continuously without having to do any layer separation technique. With the layer of resin underneath that allows it to lift up with little to no suction force.

I think another thing is if the printer can make a process to spread a very thin layer of resin on the bottom of the tray for each layer then that will reduce the amount of indirect exposure and details will come out better.

My hope is that the DIY community finds a solution to emulate Carbon3D’s tech, as it’s not THAT complicated. It is possible however that it may require specific resin formulations in terms of UV and O2 sensitivity, which may be trickier to do at home. This is the only way we will get a Carbon3D-like printer in the next 15 years, as Carbon is obviously building a gold shitting buisness with insanely expensive and mandatory subscription services and they have no interest in entering the low-end B2B or even high end B2C markets.