Form1 - only prints the bottom part of my objects

Hi, I’ve found a couple of forgotten Form1 printers on a shelf at my local makerspace.

We’re trying to get them up and running now. We’ve cleaned the printers and mirrors and bought a bottle of Clear Resin v2. That resin is supposed to work with the Form1.

We have printed a couple of small prints (2x2x2 cm) that have come out perfect. But there we’re to that we’re faulty in their uppermost part.

Then we have tried two times with a little bit larger prints. And they both failed in the same way. They we’re two different antique statues and they got cut off at the legs. In the pictures below you can see the base and lower legs of the statues. 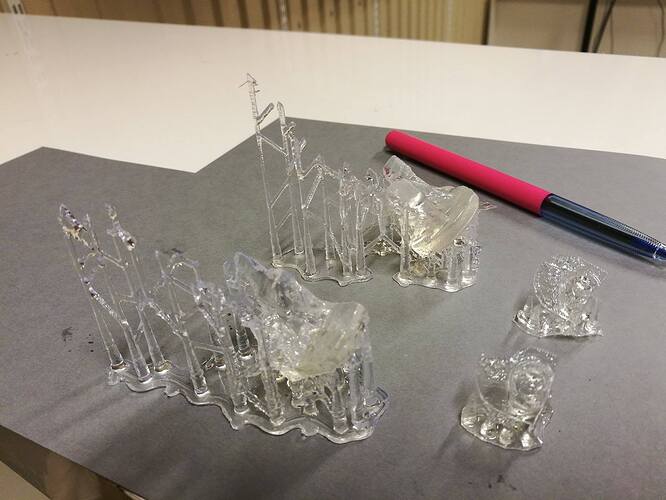 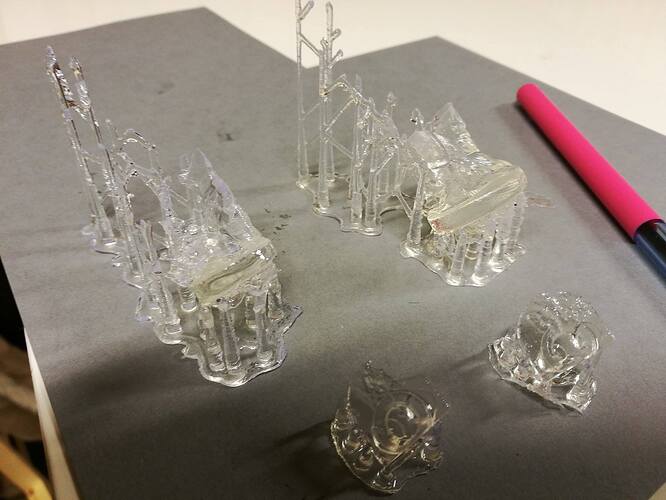 Now I found another thread with a similar case:

Hello I am from Mexico so I apologize for my english. A week ago I bought a Form 1+ printer, unfortunately I could not get prints with good quality. I read all the maintenance manuals, so I already carry out the following actions: Clean the resin tank (top and bottom) Clean Mirrors Clean building plate Fine tuning I only got the impression of small cubes (10 x 10 x 10 mm) with good quality, but increased the height of the cubes and the results are of bad quality. Today I will buy …

It seems like the problems there were the support and the orientation of the object. Plus maybe that the printer wasn’t level. Maybe I have the same cause. Also I the table I’ve been using is not very stable.

But there was something in a reply there that I didn’t understand:
"First off, you have the bottom of the cube parallel to the build platform which will cause issues because the first layer will be much larger than the supports holding it up and the layer will fall apart as it peels before doing the next layer. "

Could someone expand a little bit on this. I think that there’s something that I need to get a grasp on here. Why will “the layer will fall apart as it peels before doing the next layer”.

There is a short explanation in here Model Orientation in paragraph Print Flat Surfaces at an Angle.

The surface area of the first cube layer will suddenly be much more important than the cross sectional area of the supports. The stress generated during peel-off of the first cube layer might make the interface with the supports break. The recommended solution is as you said to orient with an angle as so the cross section of the part increases gradually and as smoothly as possible to reduce weak points.

Can you show the parts in Preform? Yours look like oriented at an angle.

Also how did you generated the supports?

Thanks for your reply!

I will read the explanation you linked. For orientation I just clicked the button for automatic orientation once. Same with support.

I’m busy right now, but I will post some screenshots from Preform as soon as I can!

Here’s a recreation of the layout of the small parts in preform. I printed four identical ones at the same time. The two on the left we’re OK. The two on the right are the ones shown in the pictures above. They are missing their uppermost part. 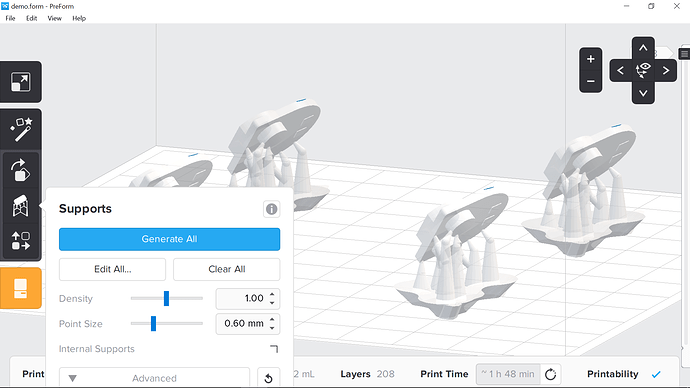 When the larger statues I printed failed. I noticed there was a big piece of material stuck to the bottom of the tray. It was a little bit hard to remove, I had to use some force.

Could it be that the peeling process fails and the resin gets stuck to the tray?

Looking at your prints and model orientation. I would give the FL butterflies a try.

You could also do a laser spot test to get a general idea of the laser shape.

Thanks! That sounds like good suggestions. I will start with the butterfly.

Blobby supports are almost always an indication of dirty or degraded optics. Remember the F1 has 4 mirrors. The main mirror you see under the resin tank, plus a smaller mirror at the Galvo block, plus the mirrors on the X and Y Galvos. If you haven’t cleaned them all, this is probably your problem. If you have cleaned them all, then you may have been too “aggressive” in your cleaning and the mirrors are damaged.

Also, you don’t say that you bought a new resin tray, only new resin. The resin tray has an optical window on the bottom. If it’s been sitting around for a while, the bottom of the tank’s window will be hazed just like the mirrors (and for exactly the same reason - volatile organics in the ambient environment condense on these surfaces and slowly, over time, cloud/haze them (just like the Windows in your house).

Thanks for the info Randy. I didn’t know there are four mirrors. I’ve only cleaned the one I spilled resin on… The tray I’m using is not new but it looks kind of fresh. I don’t think it has been used a lot.

I will print a butterfly next to see what it looks like.

If it’s been months since the printer has been used, then the mirrors inside will most certainly need to be cleaned. The galvo mirrors have the biggest impact on the print quality but they also are very sensitive.

If you just took a paper towel and some Windex to the mirror to clean it, your cleaning may have done more harm than good.

My F1+ worked great for about 6 months before it started making blobby prints. I cleaned all the mirrors and that restored the printer to like-new operation. I continued to use the F1+ until my F2 arrived. I hadn’t touched the F1+ in about a year, and I just took it out of mothballs to try a 3rd party resin. To my surprise, the printer is working as well as it did when I sent it in to retirement. This tells me that the source of the VOCs that haze a mirror are ambient environment and not from materials inside the printer itself. I conclude this because the difference between when I first had to clean the mirrors and now is that I made a slip cover to go over the printer when it was not in use, and the printer has been sitting undisturbed under that slip cover whenever it wasn’t being used to print something (meaning, continually under cover for the last 12 months). The cover slowed down the infiltration of ambient VOCs in to the printer enough that 12 months resulted in no apparent degradation of the mirrors, where 6 months exposed to the environment when I first got the printer was enough to haze the glass.

So if you have a F1 and you don’t have a slip cover for it, it seems based on my experience at least that it is something worth making.

Good idea with the cover! The makerspace we’re the printer is sitting is really a dusty environment. We have all kinds of machine for woodwork that makes a lot of dust. Not ideal… : P

I’ve test printed the butterfly now and it looks fine. Also I added an extra support to the small thing I was trying to print and it came out without the problems in the upper corner that previous prints have had.

We actually have two form1 printers at the makerspace and I will put plastic bags over them to protect them from dust.

Thanks for all the advice. I think it’s been around two years since the printers were used. Is there a manual somewhere on how to clean all four of the mirrors?

If you open a ticket with FL they will cheerfully provide this information. They can also supply the recommended “PecPad” cleaning pads. Which are extra-soft and manufactured so they don’t have any “grit” in them. They’re the only things you should use on your mirrors (except 90% IPA as a cleaning solvent).

Pec pads are easy to get from BH Photo Video who also sells the Rocket Blaster which is a duster for optics, For a dust cover for your Form1 check out the one from Zvat Industries, it is tailored specifically for the Form1. http://www.zvatindustries.com/

A regular plastic bag may produce static so I would not recommend that since it could risk zapping the machine.

For kicks you can double check your resin and tank, make sure there is no particles floating around, i would recommend straining it and mixing well. Try one part with quick print mode. I noticed a couple of your parts didn’t seem to have enough supports on the upper portion of your model.

I have already used these pads as they are recommended by Formlabs. I got them from my local camerastore.

I think a plastic bag will suffice as dust cover! I am not to worried about static electricity. : )

I’m a little bit keen on one of those trays from Zvat though!