We received our Form 3L in March of this year (2021) we’ve had about and 80% print success rate, but we’re having serious trouble printing a gear. The resin we are using is Tough 2000, and the gear is designed to be functional. Out of the three we have printed, we’ve had one success. 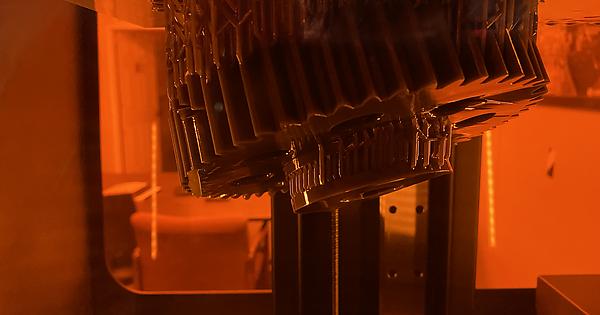 Obviously the lower cylinder of the spur is supposed to be complete, but instead this same failure has happened twice, tried changing the orientation, but have gotten the same failure. Any advice at all would be appreciated, is it our orientation? Touch point size (.50mm, but also occurred at .70mm) Resolution is on its lowest setting.

Thanks for your time!

I’m so sorry that you ran into this issue! One thing that’s worth keeping in mind is that Formlabs machines work best when parts have a 45 degree lean in at least one axis, but ideally in two. For best results, I’d recommend orienting the part using the “Auto-Orient All” feature in PreForm.

If re-orienting the part doesn’t fix the issue, I’d recommend reaching out to our support team. They’ll be happy to help resolve the issue and get you back to printing successfully!

Thank you so much, this part was 30x and 30y, our previous model was 20 and 20, so that could absolutely be the issue. Going to try and reprint today. Really appreciate your feedback!

Of course! Best of luck with your print!

So we did another print yesterday, and I’m starting to maybe think its the LPU. We printed 8 models that were basically miniature versions of this spur gear, on one half of the build plate (furthest from opening) each model came out perfectly, on the half facing the opening every model failed starting at layer ~450/750. I’m going to reach out to support and see if they can help me figure this out. This resin is expensive.

This might also be a faulty tank. There are some issues with the 3L tanks. Support should cover you for all your consumables.

That would be wonderful, I’d like to just get with them and go through a calibration print or something start to finish so we could narrow down the problem. I love the Form 3, but my superiors are starting to get a bad taste in their mouth when it comes to the 3L, which I don’t want. I know its capable of doing some amazing things, it’s just as of typing this I’m now at a 12.5% print success rate, which, to a company, looks REALLY bad.

Every time this happens, the printer is leaving remnants of cured resin floating in the tank and stuck to the bottom of the tank. Stuff you tried to print that didn’t show up on the model had to go somewhere and the resin tank is the only place (though I see some random flakes hanging from the print in a few spots to suggest some of the flotsam has been hoovered up by other parts of the print).

How are you cleaning things up after each failure?

Both of these prints were with new tanks, I tried cleaning both of them but the resin had adhered to the tanks membrane so strongly that I couldn’t get it off without risking a tear(using the tank tool). To clean I used isopropyl alcohol, and a lot of time. I’m using the tanks that were shipped with the printer, a few people have said that it’s probably the lot/series of tanks we received that is the problem. Reached out to support and they are shipping me a new tank and are actively helping me solve this issue. Support team is really great.

I’m glad support is helping you out! If you’re still experiencing difficulties after you receive your new tank, please reach out and let us know.

Just to keep anyone who’s had eyes on this up to date. I received the new tank a week or so ago, I requested a calibration print, or test print, from Formlabs support, I printed that, along with a few other things for the first print on the new tank and it came out perfectly, none of the issues I’ve had with any of the other prints. After the first test print I printed some large pieces, not quite as big as the spur gear, but used as much resin, and they came out flawless. The support team has offered to replace the materials that were definitely affected by the tanks, and have been a pleasure to work with. Completely restored my faith in this machine. Thank you Formlabs!

I’m glad that you’re back to printing successfully! Be sure to let us know how your future projects go.

And that, my friends, is why we buy our printers from Formlabs and not Elagoo or Cubic or any of the other low cost guys…

yeah… support is great at Formlabs. Very kind and helpful…