Printed two Spinners today, one of them turned out great, the other one had a crack and showed some horizontal patterns across the surface, attaching a few photos!

Any suggestions whats went wrong? Not enough supports? Not rotated correctly? Curing issue? (I’m curing it in the sun atm, still waiting for my UV Box). When I removed the supports it just fell a part. I could have tipped it over just after the IPA cleaning which might have caused it to crack? But looking at the “disc” shape it has a noticeable bend to it… 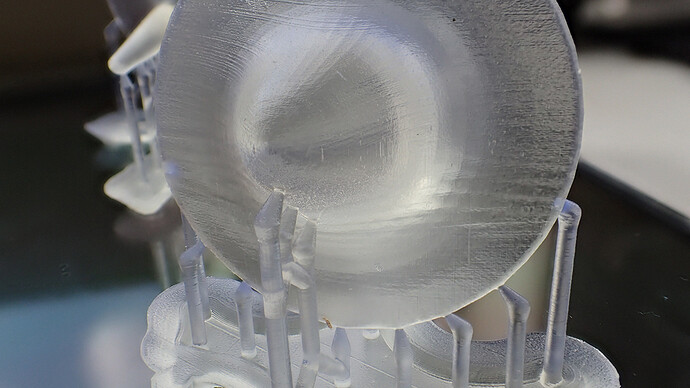 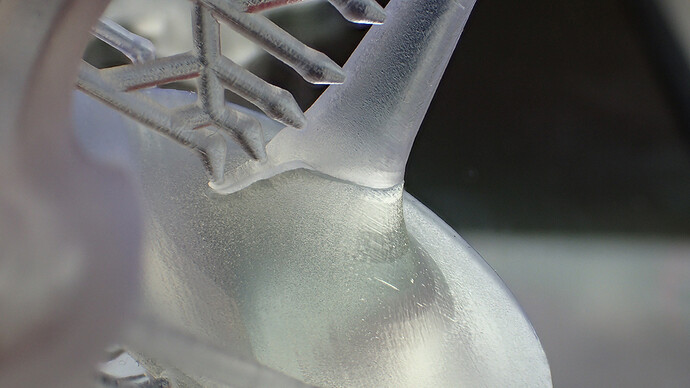 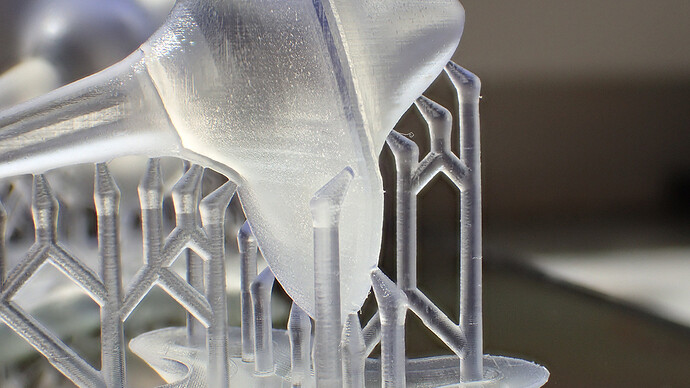 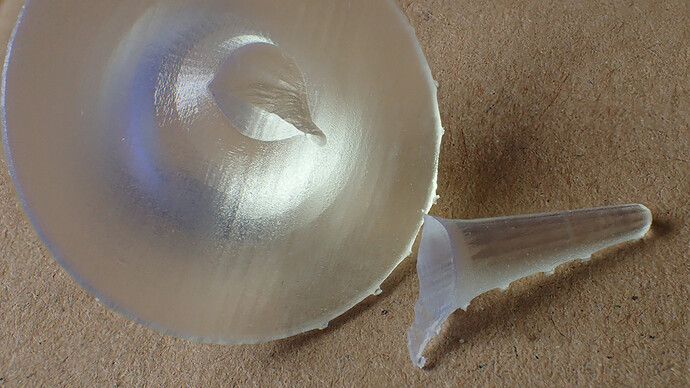 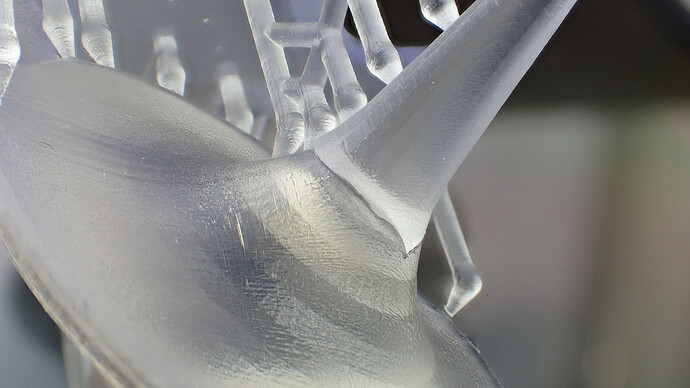 For the cracked one, insufficient supports or orientation could be the culprit. The underlying issue here is that you start with two independent pieces that needed to merge during the print. If the parts are not adequately supported (likely the case here) then they will not be at the right position when they need to merge. Try added a few supports on the large piece just underneath where the merger happens.

For a part of this shape and size, I highly recommend printing at 0.100mm layer thickness.

Besides just generally supporting the print, it requires supports to keep the part stable as it prints, so adding more supports or positioning them so that it has a more stable distribution will help with that.

Also, it looks like you need to increase the amount of subdivisions on the part to avoid the polygon facets if you want to reduce the amount of sanding to get a smooth surface.

Thanks! This is my fourth print on the printer, and I just wanted to try 0.025mm. Its not needed for this model indeed.
I used the auto orientation and auto supports in Preform for this print. I’ve got 5-6 years experience with FDM and manual supports in S3D but Im not used to the support generation in Preform yet. So to prevent that crack from happening, should I use more supports or rotate it different?

Regarding polygons, yeah I can see that it matters on a totally different level with SLA, this was a 3D hub order so it’s not my model. And I printed two on the buildplate just in case, which was good that I did! The second one turned out good (same supports…)

Im using the same thread with my second failed print… 0.025mm as well, small details on the “outside ring” , is this also the results of some missing supports? The eye’s on this thing is unsupported in PreForm, and doesnt show any colors, but in my head it cant be printed like that since it s unsupported? Would one support point on the backside of each eye help? 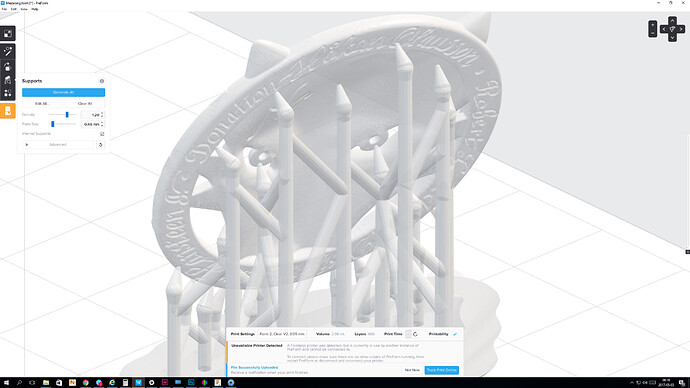 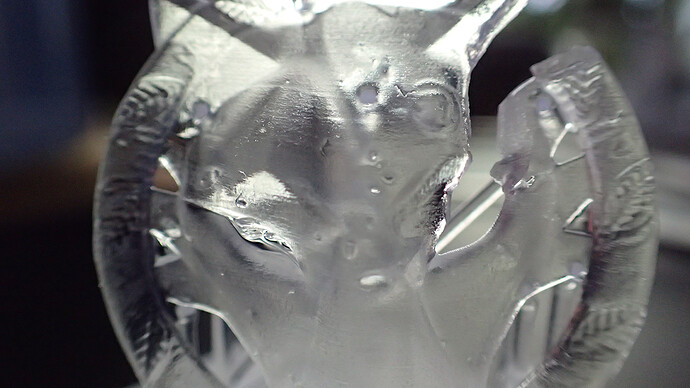 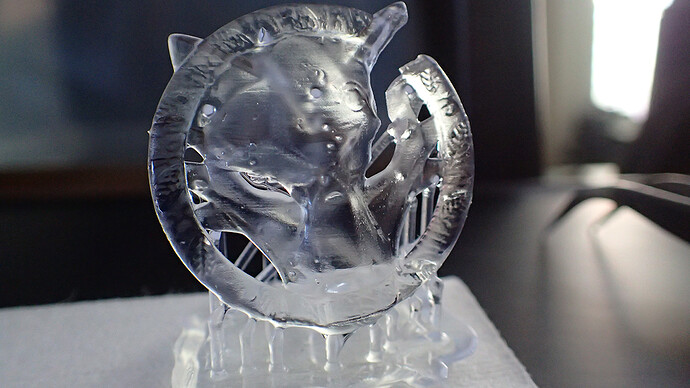 This rotation would make more sense? 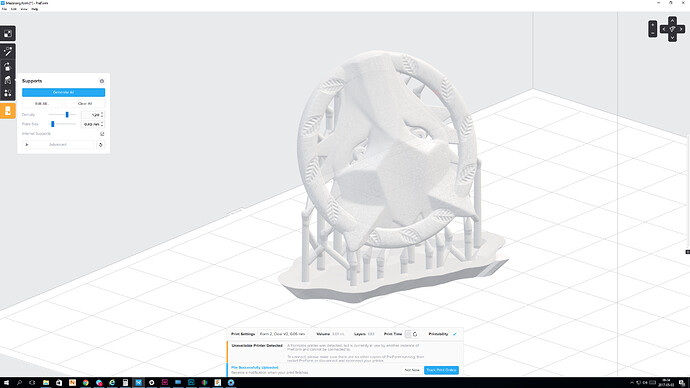 Second attempt at 0.025 went better, and I printed one at 0.05 as well after that (same rotation), the 0.05mm one looks smoother in some strange way to the eye (not zoomed in ofc) 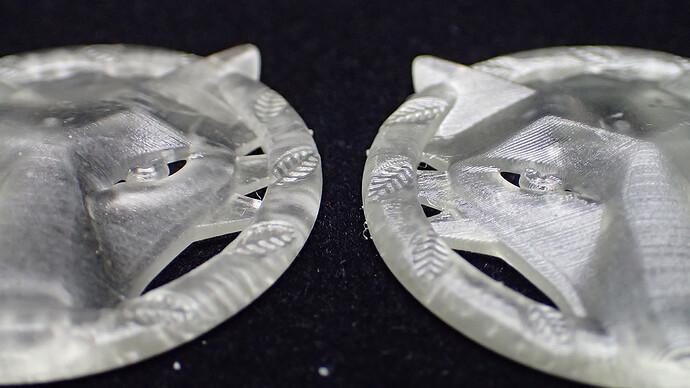 It’s a bit tricky to tell, but it looks like this failure might have been from an unsupported minima. It looks like there might be a support missing towards the center of the eye that caused that region to fail and obscured the laser from printing regions above it. You should lightly run the spatula tool across the bottom of your tank to check for cured resin. Oftentimes, when a print fails like this, the resin is cured to the bottom of the tank and needs to be removed.

Glad to see that the newer orientation worked well for you! That does eliminate any local minima and unsupported regions around the eye.

Is a comb better to actually remove cured resin, or is the spatula enough to clear and lift up any cured resin?
Yeah the orientation that the last image shows seems to have worked out fine, I’ve learned that I cant trust PreForm to 100% (doh), but it seems to do a very good job estimating I must say.

It depends on what happened with the cured resin. Most often, you’ll get a small region cured to the bottom of the tank that can be removed with a spatula. If you notice specks of cured resin throughout the tank, you’ll need to filter it before printing again.

Oh, another question when I have you “on board”
After I’ve removed the print and put it into the IPA bath, I’m using a gentle soaked paper towel with some IPA on it to clean the sides of the build plate as well as the build plate surface itself, after this I wipe it off with a dry towel. Is this ok or is it not recommended to get even a scent of IPA into the build chamber?

We do recommend cleaning the build platform with IPA between prints

As long as it isn’t dripping with IPA, you should be good to go. If IPA contacts the resin, it will dissolve it. IPA evaporates pretty quickly so it should be challenging to clean the platform and put it back in the printer before a majority of the IPA evaporates off.