Feedback for Formlabs on PreForm

I’ve been attempting to print a fairly large model (fills very close to all of the buildspace diagonally on my Form2) of a WW2 Minesweeper. It’s a highly detailed model which I had to convert from non -print type STL. This was a lot of work but eventually, I got it loaded into PreForm, fit it into the build space and generated support for it. In the end there were only two (small) unsupported minima detected which I wasn’t able to sort out.

One would expect from this a mostly good print possibly with a few rough areas, particularly as PreForm was showing it with little to no issues, however two print attempts failed fairly catastrophically - with the model just not printing on a diagonal about halfway through and the usual resin stuck to the tank bottom etc.

Now - in general PreForm is brilliant. I just think in this case there is something seriously wrong with the file that it’s not picking up. So that’s an issue that might be looked at.

The feature request is related. I would LOVE to be able to pull the repaired model out of PreForm as an STL or similar file and work on it. The PreForm repair feature is amazing at sorting out otherwise weak files which would never print but, after a pre-form repair, will. I think that if this were an option I might be able to find the problem with the file, fix it and get a successful print. As it is I’m going to have to go back to the drawing board with my raw file and see if I can find some way to make it work - a process that is likely to take many hours with no guarantee of success.

So yeah - being able to export an STL or OBJ file out of PreForm after repair would be terrific for those of us working to get files ready to print on our Formlabs machines. Also, if someone could take a look at PreForm and maybe have a look why it says this file should print when it doesn’t have a hope, that would also be super useful.

Here is what the model looks like in PreForm btw.

PreForm uses NetFabb for repair. There is (or at least, used to be) a free NetFabb. You could try to use NetFabb or some other “repair” program like MeshMixer to look for and correct issues with your model outside of PreForm. This is how I do it. I give NetFabb a shot and if it finds and fixes anything and the model isn’t changed (the “fill holes” option can be tricky) I’m good to go. If not, I use MeshMixer, which doesn’t repair as well but it does a really good job of showing you exactly where the defect is - I open the model in MeshMixer and my CAD software and work through and eliminate errors in the model by hand…

Thanks Randy. I will have a look at NetFabb. I use Meshmixer quite a lot (it’s my primary design/edit tool) and have never been impressed by its repair function. I find the auto fix generally makes a mess and there are frequently way too many ‘repairs’ to make the result useful, at least for the parts I work on.

But if NetFabb is what PreForm uses for fixes, I will definitely hunt it up. Thanks!

By the way, here’s how my two attempts at printing the file above came out… 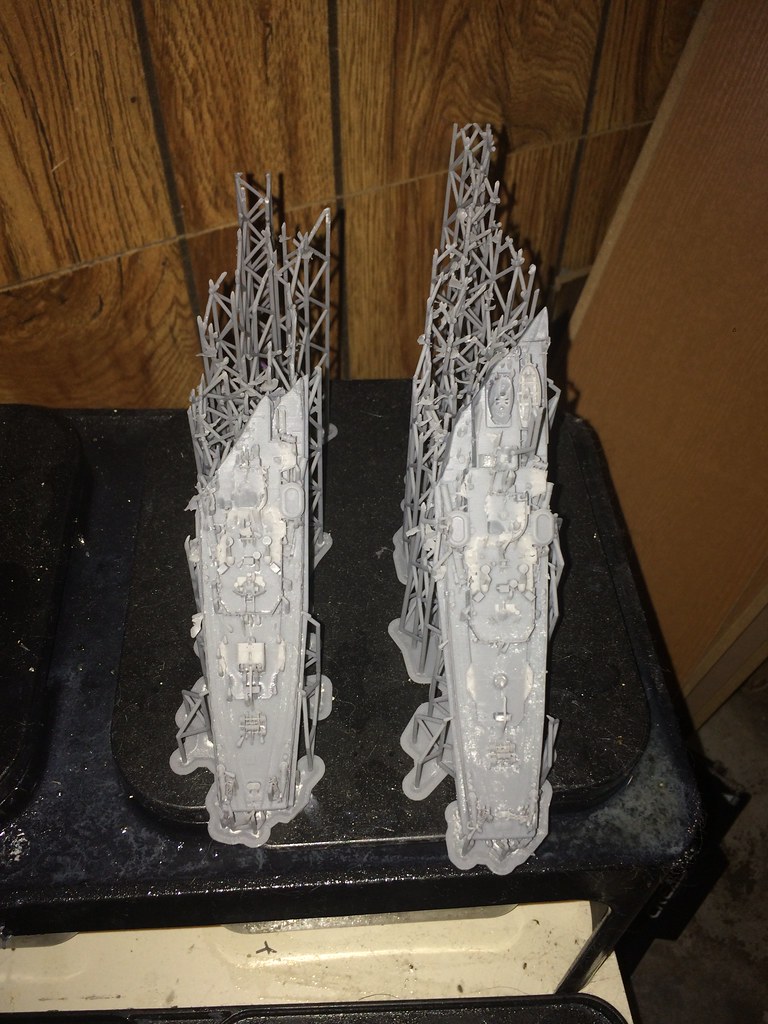 Are they hollow? and if so, do you have a vent hole someplace at the stern of the ship? If not, your failures may be due to “cupping”. Something that’s shaped like an inverted cup will likely fail due to the pressure that builds up inside when the open end of the shape is driven in to/submerged in to the resin.

Unsure. The damaged model appears to be printing solid (which was the intention as otherwise it would be too fragile) but the original model before I started work on it was hollow and even had an interior belowdecks with engines etc. That’s actually why there is a sea base for it, to close off the bottom and make the model solid.

I’ll try punching a couple holes in the file through to the bottom of the ship. If there is pressure, that should alleviate it.

BTW NetFabb does not appear to have a free option anymore and the subscription prices are much too high for non industrial users. I do this as a hobby so sadly not an option.

Thanks for the help!

If you hollow it out, it’ll print a lot faster, too. I’m almost certain MeshMixer has a “hollow it out” option… if not, there’s another program I used to use a lot called “MeshLab” that might do it.

meshmixers overall is clunky but its hollow feature is great.

As randy says your problem could be cupping, cause I dont see how a broken mesh (i.e. holes) would otherwise cause this type of layer fail.

However a cupping warning should show up in meshmixer.

The original file was not intended for 3d print and has zillions of tiny errors. It basically overloads my ability in Meshmixer to figure out what matters and what doesn’t.

I can only hollow it so much as it’s intended for gaming use - so has to stand a fair amount of handling. I’m going to ‘punch’ some holes in it, probably in blender and hope I can get it somewhere useful. Meshmixer’s Boolean difference function generally does too much damage to details.

It’s definitely been extremely challenging. I know I’m pushing the envelope here, both of the Form2 and software capabilities as well as my own limited skillset, but if I can succeed it will be extremely useful knowledge of how to handle problem files in the future.

Very much appreciate the feedback and ideas folks!

I’ve found a lot of public-domain STL models are geometrically valid, but faces that share a common edge do not share common vertices. The points they share in common are separate vertices, so the model isn’t water tight in spite of all the edges lining up and having the same vertex count. They have bazillions of errors because of this. My CAD software has a “merge common vertices” function that turns these STLs in to models where common edges share common vertices. You might take a look at this if your source file was originally STL…

@Senekal in addition to Netfabb, Meshmixer, and Meshlab, I would also recommend trying out Rhino 3D (rhino3d.com). They have a lot of good mesh repair and manipulation tools, and it’s free for your first 90 days.