To date, I’ve only had to use Elastic resin for fairly loose fitting parts, or parts where tolerances didn’t really matter very much. However, recently I was printing some more complex gaskets and parts that did require fitting into Tough 2000 parts.

Flexibles are hard to measure, but I’ve been seeing simple flat gaskets, built directly on the build plate grossly oversized in X & Y. A gasket that is supposed to be 50mm in diameter turned out to be around 52mm. Another more complex part (built with a raft) is much harder to measure but also seems to be oversized, as I cannot fit it into the mating piece without it tearing.

I can understand if tolerances are looser on taller angled parts, or more complex parts, because of the peel forces and hysteresis. However, I expected a simple flat build to be much more accurate than that.

Has anyone characterized or looked at tolerances specific for Elastic or Flexible resins? Note this is on a Form 3.

Elastic resin, especially thin parts (high surface area to volume ratio), can soak up IPA during the wash and swell, and can hold some of that swelling if they’re cured before you allow any absorbed IPA to evaporate from them. If you’re already keeping your wash times low, you might consider attempting to hand-wash thin parts to see if that helps.

Hi @Ike - I’m washing them for 10 minutes and then spraying with some fresh IPA. So I’m already washing for less time than what is suggested online.

It’s definitely not a lack of drying, the first set of these I attempted to print was dried for over 24 hours as I was waiting for some other prints to finish before I cured these. I cure Elastic prints under water.

Here’s a picture of the part. It’s obviously hard to measure flexibles with calipers, but this part is supposed to be ~50mm in diameter. This part was printed directly on the build plate and is thin - so inaccuracies caused by deflection during peel shouldn’t exist. Note that I am measuring on the side which does not have flash (ie. not the side printed directly on the build plate).

I recently re-printed this when scaled by 95% (which I had to do in a seperate piece of software, something I will submit a support feature request ticket for). Parts scaled down in X&Y to 95% came out well and they fit the mating parts fine. Scaling by 95% also fixed this issue for another more complex geometry part which was not built directly on the plate and had a raft.

While this seems like a good solution that worked across the board for these two parts…I’m concerned that at some point, after a Preform or FW update, this scaling factor will no longer be accurate. I understand that flexibles can be hard to dial in for accuracy, but I expect it to be a lot closer than this. 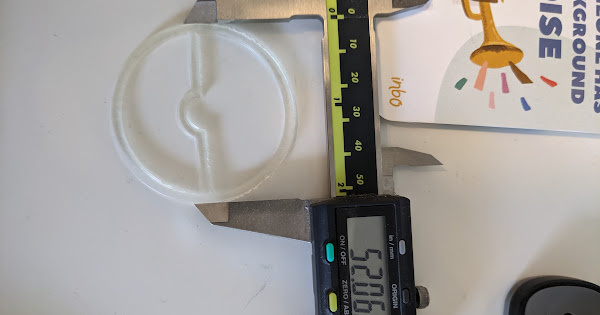 I would expect it to be closer than that too, frankly.

I’m sure you don’t want to get your nice Mitutoyo calipers sticky, but if you use another measuring tool fresh out the print, I think you’ll find that your part is a lot closer to your desired dimensions before you wash it.

I’m glad to hear you’ve arrived at something that’s working for you, and while I can’t make any guarantees, I think that your empirical scaling factor is unlikely to be affected by Preform and Firmware updates.

If you’re still in the mood to experiment with it on your end, I would try something like using tongs or tweezers to manually swish your parts around in IPA for as little time as you can get away with to remove the uncured resin - seconds to minutes. The surface area to volume ratio really can make a big difference here, and I still think that most of the distortion you’re seeing is attributable to soaking up IPA, in a way that would be less visible or less problematic with thicker, bulkier parts.

@Ike I’ll use a ruler or something next time before an IPA wash - you’re right, rather not get my beautiful Mitutoyos sticky haha

I’ll also try a really minimal wash next time, but this might not be possible for parts that have more complex geometry. I would normally laser cut the above part, but printed it along with a couple of other more complex items.

I did notice the same over-sizing on those other thicker, more complex parts though. They were harder to measure, but they didn’t fit the mating Tough 2000 parts until they were scaled.

I’ll stick to monitoring and scaling down if required for now. It would be nice if Preform could do non-uniform scaling precisely for situations like this where dimensional accuracy isn’t spot on.

I’ve been experimenting but cannot settle on a single value, sometimes scaling 95% or 97.5% gave good values.
I manly print small parts 1, 1.5 or 2mm in wall thickness, so I sometimes wash 5min on build plate and 5min on basket and then a quick rinse in fresh IPA

What I’d like to know if, once the part has swelled: Will it give the IPA back to the air and shrink back, given enough time? Or there’s actually no practical reason to extend airing beyond 30 min before curing?

Good question. I wish preform was able to non uniformly scale as well, as I found it’s only in the XY axis for the parts I was printing.

Yes, we are now shrinking our cad files by 1.7% uniformly to compensate.

I remember seeing the Z as fairly accurate, but the X & Y as grossly oversized. That being said…I didn’t have a very large Z height so perhaps the error was negligible on my parts.

At least you can shrink uniformly in Preform! Non-uniform scaling still isn’t a thing.