Anyone else experience this?

My printer has been “parked up” for a few weeks and this morning i wanted to use it, but decided to clean out the resin tray first.

I noticed that there was a 5x1mm rectangular indent in the silicone, pretty much smack bang in the middle. then when I went to clean up the wiper, noticed the same shape is in the middle of the underside of that, it’s like a little tooth which protrudes slightly beyond the wiper blade outer ring.

I married the 2 up and it is definitely that feature that had left a dent in the tray.

The wiper arm was in the position it parked into after the last build.

This has been reported several times, last instance I saw was :

Not a fan of LT tanks General Discussion

There is a tab on the underside of the wiper arm that protrudes down past the main wiper edge. I cut it off when I first noticed it on my first tank. Formlabs claims this is necessary but I see it as a way to prematurely damage the surface of the tank.

From what I have seen on the LT tanks they seem to have removed this “feature” in the new wiper, I don’t know if they removed it on the standard tank’s wiper as well since I haven’t ordered any recently.

Thanks for that, I’ve just snipped mine off as with the first wipe for the new build (empty tray) I could see by the wipe pattern that it is going to ruin the tray (if it hasn’t already… I’m already going to have to avoid building in the dented area.

If the ‘dent’ is where the wiper parks it shouldn’t make any difference to a build, since it will be outside the area covered by the build platform.

Mine doesn’t park there, it parks in the middle.

Ish… this is where it parks 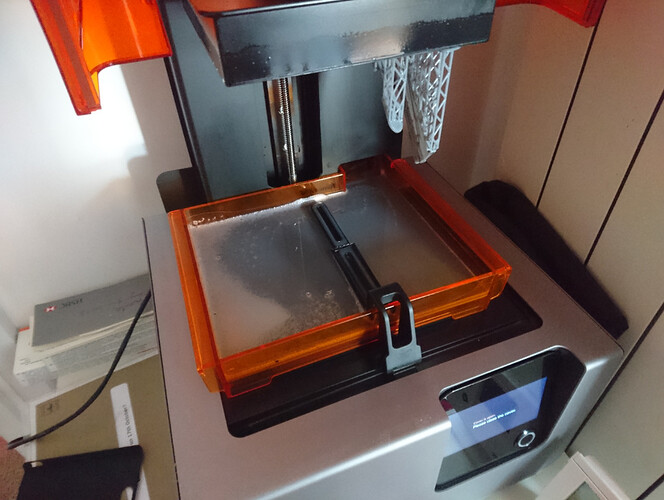 I think you need support to sort this for you. The wiper should park on right hand edge of the tank in line with the resin inlet.

He’s not using a LT tank. Parking in the middle is normal.

Correct,… My LT tanks dock at the far right hand side.