Just got my form 2 and did some nice prints already. Still learning a lot from the forum and other places.
Now I printed a part for a customer but it doesn’t come out that nice.

The wall is just not straight.
The same thing happened with the hinge at the back. It’s like the material is so soft and slowly moves out of place.

Is this a support issue?

I’ve also had this issue, printing in Tough. It appears to have something to do with the peel operation. Maybe the sliding motion is compressing one “edge” of the print, causing things to deflect in that direction. I’ve had better luck with fully symmetric parts by orienting them so the part’s major axis is aligned with the direction of the resin tray motion during peel with the lowest part of the print pointed away from the “wiper side” of the tank.

Are you using the default 100% support density or did you reduce the density of supports? Did you let PreForm orient it or did you?

I would manually orient that object so that it’s laying flat on the end of the cylindrical feature (axis of the cylinder pointed up). Point the hasp end away from the wiper side of the tank, hinge side towards the wiper side, so the part is positioned “orthogonally” to the platform, not at some random angle. Then tilt the part on the axis running from the front/back of the build platform (should be “Y”), so the hinged end is pointed down and the hasp end is pointed up. At about 45º. Then do default support generation and print again.

The orientation of the part is done by PreForm. The software first proposed to print upside down in this angle. As I wanted the top of the part to be clear without support marks, I rotated the part a bit and asked the software to orientate the part again.

I did not use the default 100% support. I printed this part twice with the same supports but different orientation on the build platform. First time went really nice. Second time is this picture… It could very well be that the first time the part was oriented like you suggested!

Thanks! So much to learn.

My suggestion to you… Pay a lot of attention on support positioning and density.
I had a lot of distortion on one of my prints when I reduced the number of supports: See image below( part on top: lot of supports / Part bellow: tried to save on supports = FAIL)
Look for “floaters” and try to evaluate if there are regions that will suffer a lot of pealing stress, those regions should have special attention on support density. 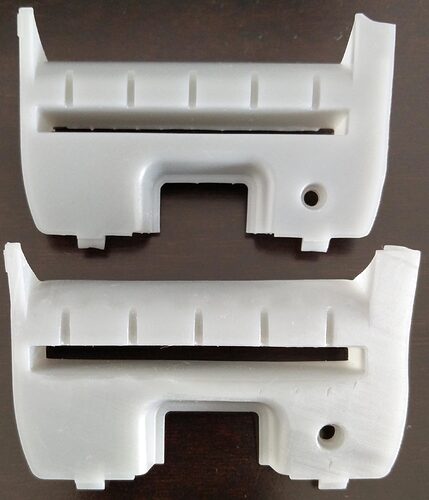 Yes, those issues are primarily caused by a lack of supports. The two halves of the part are essentially separate bodies that each need their own support. The bottom edge of the lower part looks like it only has one line of supports on the edge and the clasp part of the upper part has very few supports because the other part is in the way. Try increasing the density and/or manually adding some more supports. Also, if you can print the two parts separately, you should be able to orient and support them better.

Thanks! Great help.
I couldn’t separate the part as the hinge is printed in one piece(it’s working!)

I just started some new parts using the strategy of Randy_Cohen. Hopefully I get some better results this time.

Got this other part today. Printed it twice already trying to use your suggestions with mixed results.
Not sure what I am doing wrong?

I placed extra supports at the lowest point of every feature.

Oriented at 45 degree in PreForm with 0.4mm pilars and standard density.

First print at 0.025mm/25um. Part looks good, except for the bottom right.

Second test at 0.1mm. Part totally failed(except for the bottom…) and it seems that all feature walls got thicker

I had some problem like your, in my case it was a cloudy glass on a resin tank in that place where was a failed print. Try change a place, but first check the resin , maybe there are little clots from the previous failed printing.