Hello, I’m a new user to the Form 2 printer and am enjoying it, but I think I’m doing something wrong. After bathing the print and the support structure, I let it cure then disconnect the support structure and have numerous bumps on my printed object where the support contact points were. Is there a better method to get a clean model out of the printer, or is there a prescribed method to smooth/polish these bumps down?

The bumps where supports meet your part are unavoidable (due to the curing of the resin that accumulates around supports and is repeatedly cured by the printer’s laser).

If it’s possible to orient your part so that interior / unimportant surfaces face the build plate (so the supports connect to these surfaces) while still avoiding other orientation pitfalls then that’s best. Otherwise, try to orient delicate or fine detail sections away from the plate, and sand down, post cure, the side facing the plate.

You can try to minimize the number of supports by orienting the part, but be aware that long thin areas can deform with too few supports particularly if perpendicular to the wiper. Also, the FL orientation guide suggests orienting the side with the longest supports toward the wiper side.

Depending on the size of the piece, I sometimes add a very thin rectangle under the piece with my supports that I create outside of ZBrush. I’ve also noticed that larger supports help, and I’m no longer afraid to cut them off and trim them down slightly. That might not work on models with a complex support structure generated by PreForm.

I use a set of tools from Kate Wolf that are designed for carving hard wax—they work well for cleaning up models (she’s from Maine, so she says they’re “wicked sharp.”)

What kinds of things are you printing? Could you post images so we could suggest some options for you? 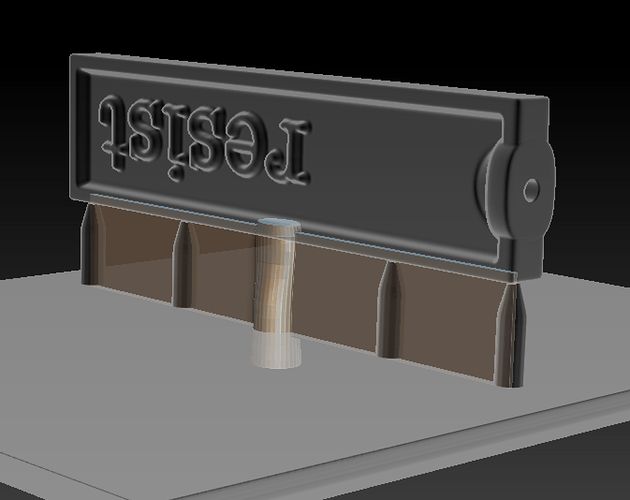 Could you elaborate more on the thin wall technique that you use?

Sandpaper is your friend

As mentioned above, orient the model in such a way to get the support marks on the least visible face of your object or in the least objectionable/easily workable area then sand them off. You’ll be amazed at how smooth the surface can be.

I’ve sanded and polished both gray and clear resins with excellent results. Flexible sanding works but the results I had (on admittedly small parts) were not great.

Last but not least, primer + spray paint look ace if you want that finished part look.

Here’s an example, the narrow vertical face in front of the camera was where the part attached to the supports and was all bumpy out of the printer. This is the result post sanding: https://imgur.com/a/yg2bY

Try freezing Flexible Resin prior to sanding. That will increase the part stiffness and introduce condensation to allow for wet sanding.

Thanks for the tip Frew - I’ll give it a try.

Sure! In my software I create a thin object that’s about 0.2mm thick, and run it up to the piece from the raft. In theory…as I understand it…the laser point size is about 0.14mm. @Frew might be able to weigh in on that. I used that information to make super tiny supports in the past, but I’ve gone back to larger supports and have gotten more comfortable with sanding. I may have mentioned it earlier, but I use a set of tools designed for working with hard wax—Wolf Tools. They clean the supports well.

In ZBrush, I accomplish that by bringing in a cube primitive, then resizing it to a thickness of 0.2mm and whatever size will run from the raft into the bottom of the model. On the snowflake ring from the other forum discussion, I used a hollow cylinder. It’s also useful to note that there is a line that happens at about 5mm above the build platform on the Form 2, so I make sure that the model starts above that.

I started doing this to address distortion where the supports meet the bottom of flat pieces. I think “best practices” suggest that you tilt the model, but I find that I get more squared prints with better designs raised off surfaces if I’m printing vertically. The little double-jump-ring pendants below show raised text (0.4mm) on the back, which printed really clean. If I had tilted these pendants, PreForm would try to add supports onto the text, distorting the text and making it unreadable. Since it’s my “maker” stamp, I need that to be clean.

This orientation does take a little longer because the prints are taller. I also put multiple items on a raft because larger rafts seem to stick to the build platform better. I also hollow out parts of the raft, which is open to the build platform. In the illustration with the four pendants, I got better results on a later version where I moved the supports out closer to the edge.

I just posted this in another part of the forum, but here’s another illustration. I removed the raft to show what’s happening. I do make all my supports if I’m working on jewelry projects, so this is not PreForm. 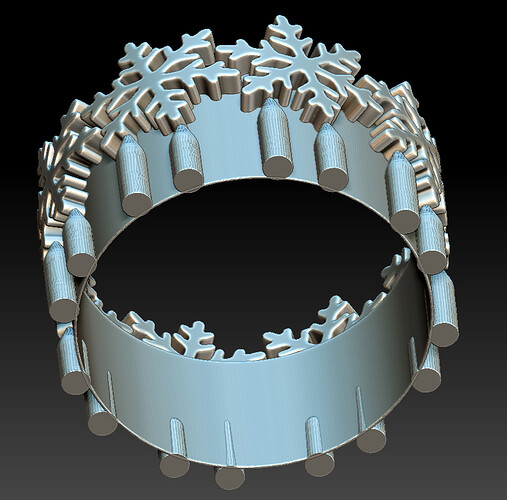 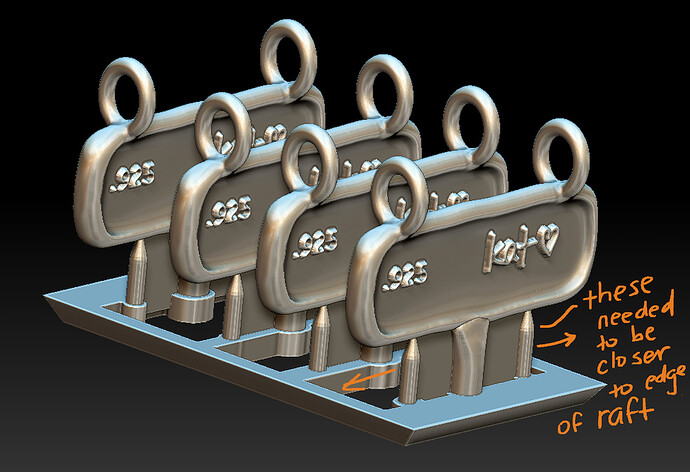 Thank you very much for the thorough explanation!