Im trying to determine if its worth trying this before I set out on a nearly full build volume for a bronze casting foundry. We know PLA burns out cleanly in this process but will it work with the purple resin?..(not jewelry scale)…Im talking about larger stuff and heard “fist sized” or look up the blues size limits but haven’t been able to find that.

Unfortunately, I can’t speak directly from experience here, but we have had some reports of some larger Castable Wax parts working well for people; large enough that they were probably shell investments and not block investments. You can improve your chances of success by hollowing out your model as much as possible before printing, to reduce the amount of positive material that has to be burned out of the shell, and making it easier or oxygen to get to the extremities of the part during burnout.

Shell casting large parts of Castable Wax may also be easier than using block investments because there may be greater oxygen transport through the relatively thin shell (as opposed to a thick block), which would also promote a good burnout of the positive.

Thats sorta what I was thinking. That Ive seen some larger prints myself. Im assuming that having “Internal Supports” on isnt going to be an issue since the melting will still be less then if I left the piece solid. To top it all off the part to be cast is already a sorta hollowed base piece. So its a cup shape that will in turn be hollowed but I believe Im leaving enough room for the investment to escape, etc…Kinda like an insulated coffee mug shape upside down.
Now a follow up question is whether or not I should use the resin thats been sitting in my tray for a couple months now or? Pour it out and let the cartridge refill?
Thx

My opinion: Castable Wax shouldn’t really settle out, and even if it did, it should stir back together pretty easily. If you can stir the tank a little bit manually just by sliding the wiper back and forth, and you don’t see any changes (no skin, or film, or color change), then that indicates the resin is homogenous and unchanged and probably just fine to print with. Or, if it looks like it’s settled out, but you can still mix it back to homogeneity, it’s probably worth trying to print with.

But if you’re worried a failed print will ruin your LT tank, pouring out 1/10 a cartridge of resin and refilling the cartridge is the smaller loss.

If the part is already sort of hollowed, then there may not be much more to gain by hollowing the hollow to make it like an insulated mug (excellent analogy). I feel like 1.5-2mm thick wall after hollowing is usually good; if your part is only 5mm thick in most places to begin with, I might not bother. Your’re also quite right about the internal supports in a hollowed part being much less of an obstacle to burnout than solid resin – just make sure there’s at least one vent hole exposed to the sprue of the shell so that trapped air doesn’t burst everything when it gets hot.

Well the print went great. Resin worked after a long time in tray. Ive discovered the shell caster is hesitant on this piece and resin. He believes the burnout procedure wont hold up…could cause the piece to explode! So…and this is still a risk my Jewelry caster guy has a cylinder for investment just large enough to do this piece. A day long print! 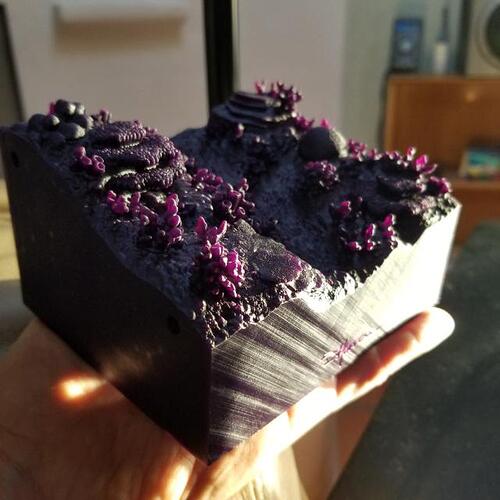 It won’t explode-unless they somehow trap water in the pattern. It might crack the shell because the resin will expand before it starts to break down.
If you printed the resin with an interior void like an insulated cup, then the expanding resin can buckle INWARDS and is unlikely to crack the shell… bu as mentioned above, make sure that airspace is contiguous and exposed to the outside air somewhere like the cup or funnel at the gate.

the only issue is getting the guys doing the burnout to follow the specific burnout schedule advised by Formlabs.

Yup, sticking close to the Formlabs burnout schedule should help avoid any problems with the part expanding. Also, if you printed that part hollow with a vent hole, make sure to seal that hole up with a wax sprue during the investment/shelling, so that it doesn’t trap air once the wax melts.

@ManaDigital please let us know how the casting comes out! I can’t wait to see how that looks in bronze.