I am new to the community and printed my first parts. Everything seems to be OK except for the fact that the black resin printed Grey while where the support structures broke off are black. Surface scratches are everywhere after removing the supports as well.

Also, I have noticed there are 2 cracks in the print, is this normal, or am I missing something? At $10 dollars a print for this part I am slightly annoyed, any help would be appreciated.

Did you shake the cartridge and stir the tank before printing? The pigment likes to sink to the bottom when unused.

Going to try another print and do this thoroughly. Thanks for the suggestion.

Make sure you have enough supports–if the part is unstable then it will flex a bit when it goes through the process of sliding the tray and lifting the print to do the next layer, that can cause it not to be in the correct position to connect to other supports and it can scrack

Two identical prints (except the position on the platform); one cracks, one doesn’t. 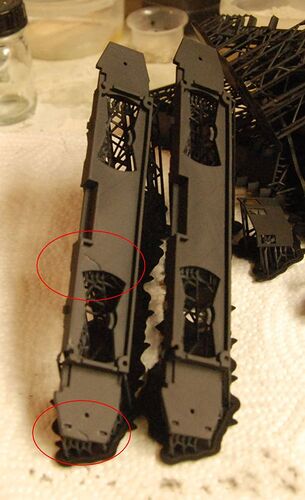 I hope, Formlabs will fix it, but my hope is slight.

I exclusively used black until they changed to V3. I hate it. Switched to only using grey now.

I will take some pictures and post them. I have found supports are completely un needed for my application and the print came way cleaner. I just need to create a feature so I can lift the part from the bed, and chamfer a piece that comes off the edge so that the transition is not so abrupt. I have noticed that the printer cannot print features which are flat against the bed surface, so the piece against the bed has to be flat, so I am moving markings to the other side of the part.

The crack was bizzare… and the black doesn’t look anything like the sample parts received and the part cracks like other sample materials when heated which was my MASSIVE complaint about purchasing the printer in the first place. The only usable materials were the black and the high temp for me, and now I can’t even use the black because black cracks under heat. The v2 black samples at least had some flex when heated, and now it simlpy cracks like the rest of the materials.

I feel I was mis lead with the materials, and that V2 black should be offered (the same as the samples). Is there any possibility of receiving the old version of the black material?

They gone away from V2 and only sell V3. Maybe you can find V2’s at resellers. I understood from elsewhere, it’s the matting-additive that is causing the problems.

Maybe you can make your own black by using pigment in white or clear resin? (I know it’s not ideal…)

I am going to have to speak with their rep about this. They know using their material in a heated environment was my biggest complaint to even begin with… and now I am seeing their sample material sent isn’t even the material offered. 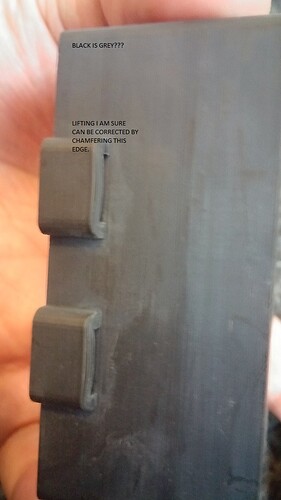 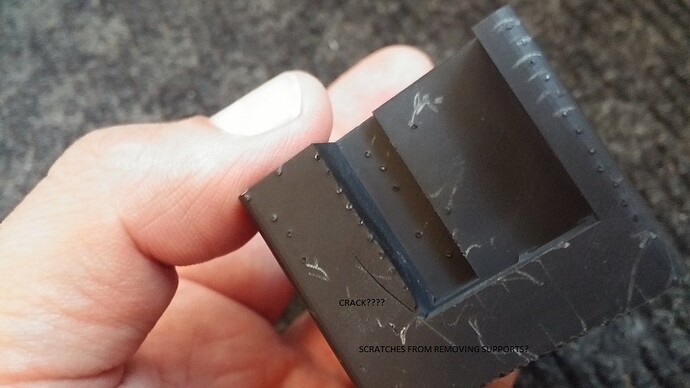 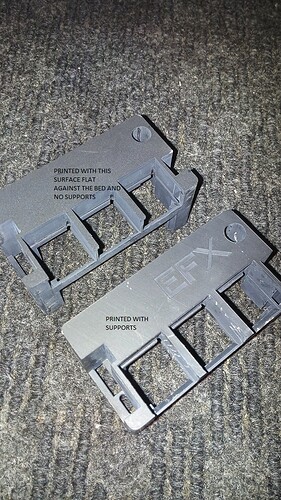 Are you just ripping the prints off the supports, or cutting the supports off?
If former, are you doing it before or after post-curing?

I did it pre cure… and now thinking… post would be wiser. Thanks for the suggestion. That said, with supports I am using double the fluid for nothing, so I don’t believe I will be using them for this part any further.

So the picture from a few days ago looks like the print is at a shallow angle, it works better if it’s closer to 45 degrees which would also reduce the number of supports, though the taller the print is the longer it will take.

On the recent prints it looks like there’s a lot of supports on corners, which isn’t necessary, since you have nice flat surfaces it would work better to place some supports on the flat surfaces to create the stability you need and since they’re flat you can easily sand them smooth (I recommend a micro-sander for that, very useful)

If the print starts at a corner then you need a few supports around that corner just to keep it stable and then stagger the rest of the supports up the print ideally on areas that will be easy to sand. If you spread them out more it will make it more stable and easier to remove.

If you’ve got some grey surface on there then it helps to use two containers of IPA–first one is the main one for soaking but after a while it will end up with resin throughout and can leave residue, so the second container can rinse that off. Then rinse in water, I also cure in water for like 5 minutes which cures the outside of the print better, then I dry it and put it to cure for 30-45 minutes.

Our support team is closely tracking user comments for Black V3 and we’re working to improve material profiles and maximize user success. In the mean time, there are a few pointers I can give and if those don’t seem to work, I’ll make sure to get you in touch with our support team.

It’s important to regenerate supports for any .form files that were previously used with Black V2. The support algorithm did change a bit between the formulations and using Black V2 supports for Black V3 prints can cause issue.

Cracks seem to be most common at vertices like you’re seeing. If you’re noticing this often, adding a few extra supports can be a big help.

The picture you posted that has a grey-ish finish looks like it might have been sanded a bit. Sanding will leave a faded reside that can be corrected either through polishing with increasingly fine grit sandpaper or by using a bit of mineral oil on a micro-fiber cloth.

As for support removal, you might find that it’s easiest shortly after the part has been washed in IPA. The alcohol will swell and soften the supports somewhat which makes them easier to remove.

These are the standard support advices, but they don’t really help.

Have a look at the picture above; there’s no space for additional supports.
Cracks increases in the second half of the cartridge, when the silicon layer becomes cloudy and the laser lost power to harden the resin.
Sorry, but I don’t have a money maker machine to replace the tank after every half of the cartridge.

I understand, Formlabs won’t go back to V2. But why can’t Formlabs offer two different Black, a “glossy”, based on V2, and a “mate”, based on V3? You will win back a big number of satisfied customers (me too)!

I am not familiar with V2 / V3, but do know out of the gate my print cracked and it was right in the middle of the support structure where it cracked. I generated the supports with V3 in the printer, and do not have any experience with V2.

Also, the unsupported V3 Black print, printed direct off the base, came MUCH better then the supported version, and cost me half the material. I made revisions to the product with chamfered edges and it printed flawless.

I am going to play with curing but the V2 samples sent flex when heated. The V3 prints simply crumble like all the other materials once heated. It was suggested I cure it less, and will try, but am not overly confident it will fix the issue. I will see and report back.