Does it really matter?

aside from the slight increase in fire hazard, about the only effect I can see it having is that the parts you soak in it might swell a little more with the 99% as it increases the partial pressure of alcohol on the surface of the resin. So the resin might take up alcohol faster.

as a result- soak the parts for a shorter period of time. 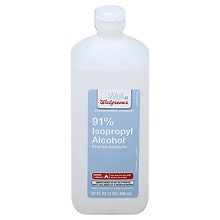 One thing I found with the IPA 91% found at most pharmacies is that it also contains glycerine which leaves a tacky film on everything including parts. Those can be washed with a strong detergent line Yellow Magic 7. But, surfaces, equipment, tanks all retain it. Even wiping up a drop of resin with it leaves the tacky surface.

I’m now using 99% and find it works great, no issues. I buy it from ZORO and it’s less expensive than any other place I’ve found. Plus free shipping.

Nice Find Walter! I was getting three gallons of abdick 99% for 100. going to go to the five gallon jug now from zoro when I need It one thing thats cool about what I’ve got so far is the metal cans I use to store the ALW resin in.

but now that I have them and can reuse ill be going for that 5 gallon jug. Will make it easy to fill the form Wash

I second this source lol. Walgreens and Wal-mart have the decent size bottles for a few dollars.

Fire hazard increase for sure. I wouldn’t use it in an ultrasonic cleaner.

Appart for legal liability and safety reasons - which, in my personnal opinion, is the main reason why Formlabs doesn’t officially recommends 99% solutions. IPA in real life situations is just as flammable as 90& as it is at 99% - you’ll dip your parts in something comprised of 10% of stuff you don’t want and that will not evaporate with the IPA. I’ll keep using 99% to get the cleanest parts.

I buy the 4 pack of 1 gallon jugs. It meets there minimum for Free Shipping. Plus it’s much handier that way. I have a Form Wash and that takes 2 gallons of IPA so you use it up much faster. Pouring the 32 oz. bottles is is a mess. Plus the 99% has a much longer life it seems.

I also buy spring water in the 2.5 gallon containers and pour that out into used 1 gallon water bottles. Then when I pump out the Form Wash it goes into those large containers. Again, much easier that trying to pump it back into 1 gallon bottles.

I haven’t yet, but plan to, recycle the IPA from the large container back to the Form Wash to see how it works after the residue has settled. Don’t expect as long a life but it still will be a savings.

Yeah good tips, I’ve actually got some left over 91% that I keep in old liquor bottles. I place them near the window I plan to reusethem after a good amount of settle.

I recall Formlabs recommended 99% back in the Form 1 days, but later reduced their advice to 90% and added this to their website:

Higher concentrations of IPA are available, but are much more hazardous to manage, while 90% solutions are safe for household use.

I tried to probe a little at the user conference to see if anything specific prompted the change, e.g. if they noticed employees getting symptoms or anything. The response I got was that they’re about equally effective and 99% will evaporate down to 90% pretty quickly anyway (not sure how authoritative that last part was).

I’ve been wondering about health effects from long term exposure to IPA vapors, especially after one user reported complications. Not trying to scare anyone, and Wikipedia says IPA is relatively non-toxic compared to alternative solvents. I wish I could find some kind of air quality monitor that measures concentration.

I appreciate all the expertise shared in this thread and will be watching it. For what it’s worth, I’ve been diluting mine to 90% lately with distilled water, and haven’t noticed any appreciable change in effectiveness.

I buy my IPA in quart sizes from Wally-World, and they list only two ingredients, IPA and water.

For what it’s worth I get IPA “100% 2-Propanol” by the gallon from Sherwin Williams. It’s about $25 per gallon, the manufacture number is R6K20. My local retail store doesn’t normally carry it but they special order it for me.

Is the extra 8% worth the money? Not so sure. Someone mentioned that IPA found at pharmacies contains glycerine. That’s incorrect. “Rubbing Alcohol” does, but Isopropyl Alcohol does not. My bottle of 91% IP which I bought at Walgreens states that the active ingredient is isopropyl alcohol, and the inactive ingredient is purified water.

I hadn’t thought to rotate the clean tank to be the dirty tank… great idea. That will save me a lot of IPA.

And folks the primary difference between 99% and 90% is not inhalation health hazard- the fumes you breath are the same either way as it evaporates.
The difference is that 99% is a significantly higher fire hazard.

That’s correct - the only real difference is in fire hazard. This is especially a consideration if you are putting it straight in an ultrasonic cleaner.

Boom, baby! My local electronics shop felt pity on me coming in every month for five liters of IPA (I use it for other things besides printing) and started ordering it in ten liter bottles just for me, Approx. $43 USD.

And I’m probably not doing much to dispel the stereotype of East Europe and its alcohol.

I researched it for work years ago, we were using it as a cleaning agent and they had very strict chemical substance controls. That being said, I wouldn’t inhale it, i.e., maintain good ventilation, and I would wear gloves when using. Aside from people potentially passing out from inhalation, I could only find one instance of contact exposure, but the patient was soaking rags and applying it to their arms daily. Ignoring flammability concerns, I think the resin poses a greater health risk than the isopropyl.