I’m revisiting this topic that I had started a little less than a year ago about print failures due to defective trays. The original link is here.

I’m asking for all 3L owners to provide some feedback on their trays and nuisance failures that can be directly attributed to the V2 trays.

We all knew the V1 trays were defective, and while the V2 trays started out very strong, we are now encountering continuous failures on every build we print. Same part, same supports, but usually the rear half of the build plate experiences failures while the front half is fine. While everyone will say that it could be a bad LPU, we own three 3L’s and all of them are experiencing the same issue!!

We contact support and they indicate they are bad trays and are good about sending us new ones. I should note that we print almost exclusively with T2000 and the original V2 trays lasted us well beyond 250 hours. In fact, in some cases we went as far as 400 hours and then we simply replaced it because we felt bad. Then we started off with having trays experience premature failure with maybe 100-hours into their life, then 40-hours and now we get immediate failures on first prints on new replacement trays.

Is this just a ‘me’ thing or are other 3L owners experiencing the same issues? The picture below is a good example of what we’re seeing across any type of multiple common part builds on all printers. Front half of the build plate is fine, rear half are all failures. Doesn’t matter whether they are tall or short parts. 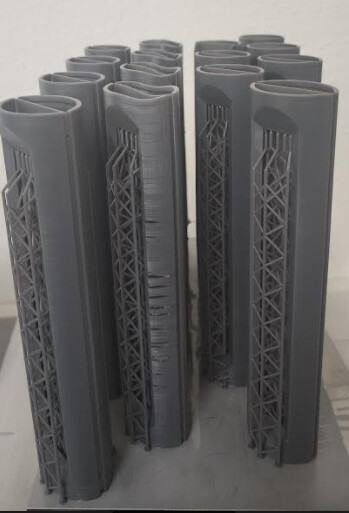 Please let me know if I’m alone, or not alone in this issue.

in this picture, what is the front and what is the back? It looks to me like the prints in the middle are the ones that are failing… if so, I’m going to go with “heat”. Where the printing density is higher, the failure rate is higher. If you just print 1 of those objects on each corner of the build plate, what happens?

@Randy_Cohen - In the picture, printer front is on the right, printer rear on the left.

It doesn’t matter if we print a whole batch or just four, like the picture below before wash (taken today). Front ones turn out great, rear ones turn out crappy. 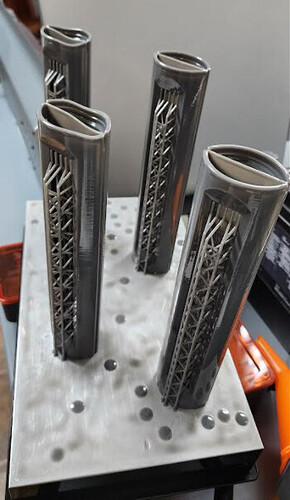 To be frank, I’m not asking for troubleshooting… I’ve already done that exercise with Form Support no less than 20 times. I’m just asking the community if they have similar issues and if they are, let’s take this message to FL and raise the awareness.

In general, I don’t see issues like this on my 3L. If it’s a bad tank I’ll see somewhat similar warping but it’s usually very pronounced and I wouldn’t expect you to see it repeatably across several machines/tanks. The pattern of front vs rear failures is also strange…that seems too repeatable for a tank failure.

I’m assuming you don’t have cupping issues that might be making things wack? This seems like it could be an LPU thing but across three printers is odd.

Did you used to be able to print these without problems?

One thing worth mentioning…is that I’ve noticed a significant increase in failures and poor quality on machine using default/beta settings…so I’m always printing in Legacy mode. I did a whole bunch of experiments recently concluding Legacy is better.

I would be very curious to see how your prints come out on Legacy mode, although the front vs rear pattern makes me skeptical…might as well try though.

@leonhart88 - Good point about the new default settings versus legacy. We were more successful before that update happened. My product dev engineer got a message today from FL Support indicating that they want us to downgrade the 3L firmware.

As a FYI, she also said FL Support indicated that the current firmware has a bunch of revisions regarding the film tensioner behavior. They didn’t elaborate more. We have noticed more ‘popping’ of the film when the build lifts to separate the part from the tray.

I have a call tomorrow AM with the FL engineering team to discuss the issues. I also don’t believe that this is strictly a tray issue, but I’ll let you know what I find out.

If others are having issues like mine, speak up.

I recently updated my F3L and F3 firmware and I haven’t noticed any problems (other than my last Rigid 10K rafts getting stuck to the build plate…but I’m not sure if that’s just a freak accident and unrelated to FW).

If I were you, I would try Legacy mode on your current FW first before downgrading and if that doesn’t work, then proceed to downgrading. The rear/front failures are still very suspicious.

You haven’t shown us what the other ends of these pieces, ie the part that is printed first, are like.

To me, this looks like one of the LPO is moving slightly more slowly in the x-direction than the other. If this is true, then ensuring that both x-lead screws are adequately greased should cure the problem.

Thank you for reaching out and sharing your experience with this issue. This appears to be an example of Tank film warping, which can indeed be attributed to a particular tank (or tanks) as you mentioned. Following up with our Support team will be the best way to address this to get you back up and running.

That’s not how the 3L works. There’s only one X-axis and one main LPU, but inside the main LPU there are two laser, galvo and parabolic mirror assemblies.

Hello! @leonhart88 is right on this point - (I apologize if I seem like I’m correcting as that is not the intention of this post) I did want to just make sure to clarify that the main LPU in this context is referred to as the LPU Housing for the troubleshooting team - the housing holds two LPUs with the laser/mirror assembly setups. If a support case is made, referring to them in these terms will help avoid confusion/the need for additional clarification during the troubleshooting process.

Just a quick update here. We’ve been told that we’re an outlier and that we are dealing with bad trays. I worked around the standard first layer of support and instead contacted our rep and was immediately escalated to the engineering team since we’ve been dealing with this for nearly 2 years. Samuel with the engineering team has been taking this on personally and I greatly appreciate him and his follow through. It’s an ongoing story and I’ll continue to update as things arise.

That said, they don’t have a good excuse as to why similar parts print well and others don’t on a common plate. I have been told that we shouldn’t print parts that big, and break them down into smaller parts and then join them together. When I heard that, I nearly went nuclear. I was an early adopter of the 3L’s and was sold on the fact that we can utilize the full build volume. Clearly not the case. On one printer, we’ve rolled back the firmware and preform as a test and are having better luck, but the fact that we have to go backwards to move forwards is not a path of confidence with the machines or with FL.

If I know what I know now about the 3L and it’s severe limitations, I would have avoided the 3L’s. I think the 3’s are amazing little tools, but I think the market has matured with other vendors on large format SLA’s and it’s now a serious consideration to sell my fleet and move onto to someplace else.

Not trying to be a Debbie Downer, but I think my frustration is evident and I hope that Form can figure it out. Again, I’ll keep everyone posted as the story progresses.

Getting better results after rolling back is interesting.

Did you ever try Legacy settings?

Yep. Legacy settings are what we’re running with and we’re having better luck. Still have failures, but they are less dramatic and an increase in successful part counts.

I forgot to mention that the latest firmware update added a routine to stretch the film more as the tray ages. That was confirmed by FL. For us, we start off with a nice tight tray but after the first run, we start to see full diaper sag.

Hah glad to hear Legacy is working better. That definitely validates what I’ve seen and tested on my end. I’m assuming their support team knows? I had been talking with Douglas, one of their senior staff about my observations.

I wonder if they tested/validated the new print settings on the Form 3 and then just rolled it to the 3L without proper testing. My Form 3 always prints fine but I only trust my 3L in Legacy mode right now.

I’ve also noticed the diaper sag and asked them about it before. Never noticed any issues on my end.

Out of curiosity what resin are you printing?

Thanks again for keeping everyone in the loop. Regarding the print settings, they are tested on each printer and can vary based on resin type and layer thickness. It’s good to know that legacy settings seem to be yielding better results in certain setups, as our Support team can pass this feedback along to engineering to take a closer look.

On the 3L’s, we use exclusively T2000. Those are our internal production machines.

If you want to know the effect of a side by side comparison of changing the tray on a 3L, take a look at the pictures below. Same printer, same firmware, same print but only changing the tray. Crappy ones are on a tray that only had about 30 hours on it, and the good looking ones are on a brand new tray, first run. We’re currently favoring the front side of the build plate since it seems to have the most success with early warping of trays.

Yeah that’s kind of inline with what I’ve seen in the past with faulty trays. Also looks similar to my observations between Legacy & Default settings.

I definitely don’t see this that often on my 3L…although I operate a rapid prototyping outfit rather than production…but there have definitely been many times when I’ve printed a full build plate of Tough 2000 with no issues though. Guess I am just lucky

Hi all,
A suggestion (which may have been offered already) that could also help is to see if you can vary up the placement and avoid printings when printing if space allows. I’ve seen some personal instances of where it seems to help with the tanks. We do appreciate everyone’s patience in the matter as the team works on this issue. This feedback is valuable to us.

Tech support normally is very good with formlabs but this machine should be working more effective across the board by now.

This has to be the longest beta testing in existence. If your going to send out these machines then they better be ready for primetime since the cost of them is more than double of other units.

Hi @Titon, I certainly hear you on this, and I appreciate your feedback. We are committed to ensuring all Form 3L users can be as successful as possible, and we are continuing to work on issues like this one as they arise.