For the las few months, I’ve been acquiring, modifying and printing Warhammer miniatures, but I’ve always wanted to find a model of the large Imperial Knight Paladins.

A couple of months ago I came across such model, which looked beautiful, albeit, all that beauty was “skin deep”. Since the model had been extracted from a game, the actual geometry was pretty rudimentary, and all the details were just texture maps and bump maps. I even added back some of the details to the model, but the underlying surfaces were just not sooth enough.

I then bought an actual Imperial Knight Warden model kit, and it simply blew me away with the detail. So I just had to try and model it from scratch. Using a pair of calipers, I measured the model and translated it into a Solidworks model.

Below is the result of 1 1/2 months worth of spare time in the evenings and weekends. It’s about 85% complete. I still have to do the armor plates around the legs, the banners and add some additional details, but it’s ready enough to actually start to print some of the pieces.

BTW, this model is fully articulated, unlike the model kit which only has the arms movable, and I’m printing it at 150% the size of the kit, so it will stand about 12" tall.

I’ve printed a few pieces, namely the pelvis section and the head and helmet, but I wanted to print them at 50nm resolution, and found that I can’t print anything successfully at anything other 100nm (this has been reported on another thread, and Formlabs is trying to troubleshoot me through it, but no luck so far).

Will update this thread as I get more stuff done

That’s pretty amazing so far. I can’t wait to see the final product!

Wow, love the model, that is definitely not skin deep detail.

What is your modelling software? Looks like it is making polygons of all curved surfaces…

I’m using Solidworks, and it most definitely uses curved surfaces (beziers). The polygon surfaces you see on the printed model come from the export to STL.

I could crank up the export resolution even higher than what it is, but then I’d end up with parts that are simply to complicated (too many polygons) to print.

I know there are some 3D printing programs available that use curves to define the tool path, but I don’t think PreForm is capable of that .

If that were the case, the ball, for example, would be made of of many surfaces, but as far as the solid body is concerned, it only has one contiguous face, not multiple flat ones.

Here is an example. Using revolved base, I made a sphere using a circle, and an ellipsoid using a spline. The end result in both cases is a solid made up of a single surface.

I don’t profess to know how Solidworks handles curves internally, but to the end user, it presents a single surface. The faceted surfaces that you see in the printed model are due to the tessellation that occurs in the conversion from solid to mesh. And I can control the coarseness or refinement of the mesh during the export process.

I’m curious if you are referring to what you see on the computer screen or the results from printing on a FormLabs printer.

I am quite confidant that SolidWorks creates curved surfaces, true splines, NURBS surfaces, etc. I use SolidWorks almost daily and I’m a CSWP.

I probably should have kept my big mouth shut. But I just wanted to let you know what really happens. And yes for the end user for a 3D printed part or a CNC machined part it is a curved surface. And if you made a dwg of the above parts they would show radii or dia’s or arc lengths. But even though you can’t see it those sketch lines are a series a very small segments. You just can’t see them and you can’t zoom in close enough to see them. I only know this because of a prior job I had. We made tooling for the big car manufacturers and we made a lot of tooling witch consisted of punch and die sets. We couldn’t use software like solidworks, solid edge or inventor because of that. We could use unigraphics though because it created a true curved surface which our programing software needed to write the programs to make the punch and die sets (the sets had to fit together perfectly). My apologies, didn’t want to ruffle feathers.

Okay, I understand what you are talking about. This is mostly a function of how curved surfaces are translated between CAD and CAM systems. There are certainly subtle differences in the inner workings of CAD systems and CAM packages. For most purposes, the differences are not significant. When you get into high precision, those subtle details become important. Some packages such as Unigraphics have unified CAD and CAM. This helps because of the consistency and ability to avoid translation issues.

Its good to know that these issues arise with small details.

Well, this is a model of a toy, and it will be printed on a consumer grade printer, so I’m not going to worry about whether or not it’s accurate enough within a few thousands of an inch.

But it more than good enough for my modelling needs.

@ csuave. I like the R/C rock crawler. Did you ever build it?

I"m working on it. Since I bought a Formlab Form 2 I had to go back and make it into a bunch of smaller parts. So I’m figuring out where to fasten to what can be thread into what. Very time consuming. But when it’s done it will be one of a kind, and who knows where it could lead. And Technically it’s a 1/10 scale R/C U4 race truck. Not sure how it will crawl. lol

It looks very similar to a Axial Wraith crawler I used to have, with the big fat tires and all, that’s why I mentioned it.

That’s funny, because I have a Axial Wraith. lol
Plus a Axial Yeti
Axial RR10 bomber.
The pic was more in the lines of the Yeti.

A few more details added, and a terrain platform. He’s about 95% complete now.

and a basic animation 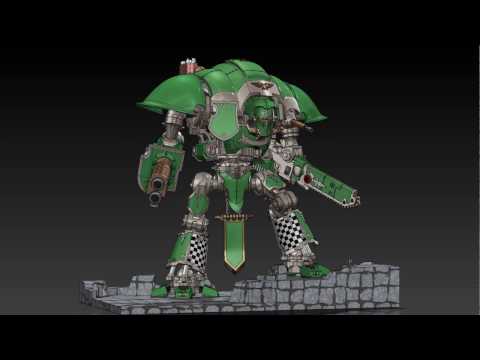 After nearly 2 months of work, the Imperial Knight model is finally done. There are a couple of
small hoses that I didn’t model simply because they will be made of actual flexible rubber, rather than hard plastic, but other than that, it’s done.

The decals, give it the finished look. I don’t know if this is going to be the final paint scheme of the printed model, but it looks pretty cool as is.

Next up… printing the beast.

@csauve, SolidWorks is a prismatic and NURB modeler, just like NX (Unigraphics). It models prismatic surfaces from planes, circles, ellipses, and cones. Complex surfaces from splines are NURB surfaces.

You maybe thinking of Polygonal and Sub-D Modeling like MODO, Maya, and ZBrush.

Fusion360 is a prismatic, NURB and, T-Spline modeler. T-Splines are a different type of NURB surface (I am a bit unsure on this part).

NX has it’s own CAM package (and it is a very nice one). The translation between NX CAD and NX CAM may be superior but the CAD is the same. Another CAM package that translates SolidWorks and Inventor files into smooth CAM surfaces is TEBIS. Also a high-end CAM package.

Try this experiment, export a NX STL file. It will be made of triangles, just like any other CAD package, Prismatic or Sub-D. CAM is different in that the G-Code can be written as an equation by some CAM packages.

Ok, it’s been a few days sine I posted any updates on this, so I though it’s time to post something.

I’ve been having issues printing .05mm resolution, so for the past couple of weeks I’ve been monkeying around with the printer trying to solve the problem.

While I think I found the culprit, I’m still having issues printing reliably at that resolution, so I’ll print this model at .1mm. So far I’ve printed (and reprinted) a few parts, the legs & feet, the pelvis, head, cowling, helmet and the banner hanging between the legs.

Here is a quick snapshot of the assembled leg. It can pivot at the ankle, knee, and hip.

What problems have you been experiencing. Let us know, many of us have troubleshot may a problem ourselves (with or without FL assistance)… and I’m not saying that in a negative way, just that there’s a good number of smart people posting here