Damn this sucks. I’m not really sure what happened, but it seems like a few of my trays broke in the same spot. Appears to be the back left corner of the inside of the tray. Resin leaking all over the place. Luckily it caught it on the tray below it, but now I’m afraid I have lost those trays. If they are leaking from the inside, I don’t want to put them in the machine.

What is going on with this??? 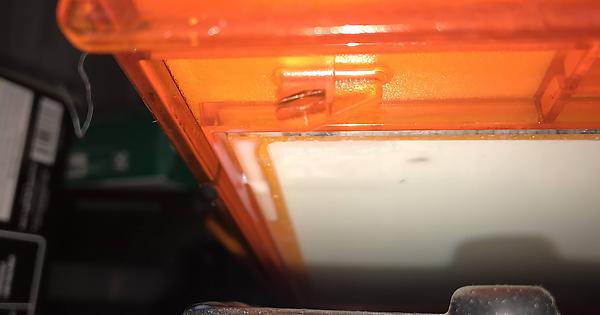 Looks like the resin got under the coating on the bottom, how old are the trays? If that’s the case then you might be able to get them replaced since it would be a fault with the tray.

They are about a year old. Sucks that now 3 trays are wasted. I can try to save some of the resin I guess.

Seeing multiple resin tanks fail this way is pretty unusual! Our support team will want to know about this. Someone from our team will be in touch with you by email.

I haven’t gotten an email yet, should I reach out?

Did you get any more info on this? I’m only had our Form 2 for a few months but i have had one tray fail due to resin leaking under the PDMS layer and it looks like I have a second developing the same problem. Looks like the adhesive holding the acrylic window in the tray is attacked by the resin.

Just found this today, happy it was not installed in the printer… is the first time I got that issue, is that usual?

This is why I love keeping the trays outside the printer in their box.

TLDR: You are only supposed to keep the resin in a tank for <1 month at a time. Which to me is crazy. I am not a production shop. I’ve been using 4 different resins for the past year. Support sent me here, and made things right.

@Frew is this the same with the new LT tanks as well?

Our current recommendation for storing resin in LT tanks is 2 months. Of course we will listen to customer feedback on this once a lot of LT tanks are out there getting used.

I was in contact with Formlabs Support in January since we had a few leaking tanks.
Formlabs response was that the OLD tank should be able to hold the resin for 2 months. FL support advised me to buy the LT tank should have a “considerably longer lifetime”. Now you’re telling me that in fact the new tank is not better than the old tank?

We print mainly very small, detailed parts in Castable. Printing a full platform takes in our case 10 hours of printing time and 45ml of resin. Therefore, with five workings days a week, we can only print 2 liters of resin before we have to expect resin leakage? Although the LT tank that is supposed to last for at least 20 liters?

So I was confused by this and went to the support site :

The two months thing is only if the tank is unused and in the printer. I personally have no issue with this, it just means you have to put the tank in a cupboard if you don’t plan to use it in the next 2 months.

I do not store my tanks on the printer either. But the key word here for me is “empty”.

Aside from Castable we use 4-5 resins on a more or less regular basis (3-4 times a month each).

Emptying / refilling each of those tanks after each print is not an option for us. 3D-Printing an a Form 2 is a time consuming process as it is. (I often find myself programming prototypes on our CNC mill instead of printing them). I have not yet encountered an easy/clean solution for storing the resins either.

Yea this is what I don’t like. Having to empty the trays is super annoying and messy.

I guess I’m going to start just keeping one type of resin open at a time.

The same thing happened to me on a new tray I purchased in December. We don’t have a lot of time in our laboratory to return items however it was very disappointing, at elite all over our form 2.