Some new prints done with ApplyLabWorks

It’s been a few month since I posted some new prints, so here is the first one. Orc Shaman model I downloaded from Pinshape.

The model is about 28mm scale, and highly detailed. I separated the figure from the base so I can print them separately. It was originally printed at 0.1mm, and while it looks pretty good, it wasn’t as detailed as I would have liked, so I reprinted it at 0.025. It took 4:30 hours to print a tiny little model less than 2" tall.

Anyway, the model is printed in ApplyLabWorks Grey mix, which I previously used on the Clemetine Diorama.

After cleanup, I primed it with Vallejo white primer. I’ll probably be painting it this weekend.

Do you run your printer in open mode? Or fill FL cartridges with ALW resin?

I have a Form 1+, so I don’t use cartridges. Also, I didn’t use Open Mode, just the White v1. profile which is what I found that works with this mix.

When I made my first mix, which is 2 parts beige to 1 part black, I though I’d try various profiles, and ApplyLabWorks did some tests and found that the High-Temp profile works best. I personally found that White v1 works best for me.

I did try the High-Temp profile, which at first was reluctant to use because I know how harsh it can be on the PDMS, but then realized that the harsh effects are due to the reaction between the PDMS and the High-Temp resin itself, not the profile settings.

So I did a few comparison prints between it and White V1, and found that they’re almost the same, with the exception of print times, and the supports, which are thicker and like to have much bigger connection points (0.7mm default). When I reduced the connection points down to where I normally like them (0.4mm), I ended up with poor connection and warped areas.

For this reason, I’m back to White V1.

Love the write up! I was doing 3 parts beige mix to black now I’m thinking I should try your move. I do have a form 2 so I wonder if that would change things much

It wouldn’t be recommended to use another resin in the cartridges as the viscosity difference can mess with filling (under/over).

Since I had the day off, I though I’d paint the “little ugly”

Hmm… I don’t know if I should feel about this.

I just noticed I earned a “Nice topic” award, which means I got more than 10 likes, and I’m grateful to see that people like my little model, but I would have though that the painted model would get more likes that the basic printed and primed model. Heck, it’s not like I carved the model from a block of plastic by hand, the printer did most of the work.

On the other hand, I did put nearly a day into painting the little bugger, so I’m a bit conflicted

Here is another cool model. This one is from the popular game Overwatch, and is the character Zenyatta. Zenyatta is a robot character, but I found it while doing a search for Cthulhu. As it turns out, one of the popular skins available for Zenyatta is that of the Chtulhu the Cultist.

The model is a little over 6" in height including the base, and was printed in 3 parts at 0.1mm. Right now it’s only been primed, but once it’s painted I’ll post additional photos. 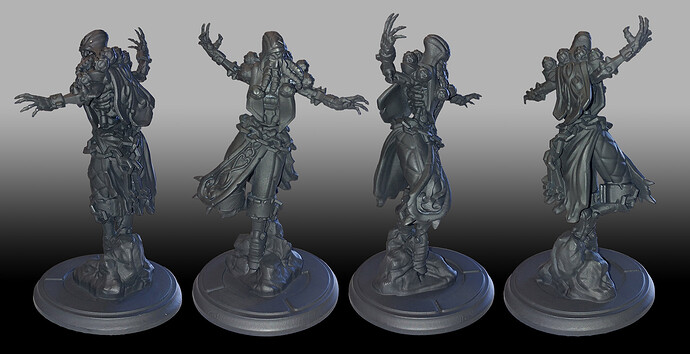 Three new resins announced from ALW. They listened and gave us a grey. They all appear to be basic resins. I was hoping for some new materials.

Same but I’m excited to get gray and this just means they “ALW” isn’t going anywhere and I like that!!!

Now to find some cartridges

I just wish they would make it a solid gray instead of translucent.

What makes you think it’s translucent? it might appear translucent on very fine and thin parts, it’s quite opaque on normal thickness parts.

Also the new tan, appears to be pretty opaque. I already mentioned to ALW that one thing they should consider is use some kind of “flattening” compound, to give the surface a bit of a matte finish, like the FL Grey V3 has. That would increase the apparent sharpness and detail, without the need to prime the surface.

I agree, I haven’t seen any in person yet just done my own mixes

ALW were kind enough to send me a bottle of each (Tan and Grey), and I’ll be giving them a go in the next week or so, and post some samples and reviews.

By just looking in the bottle the Grey looks quite opaque, and the color is similar to V2/V3. The Tan looks like something I’ll want to try first though. It’s a nice salmon colored flesh tone, and it too, looks quite opaque.

We’ll see how they print.

nice you got two bottles I have most use for grey and have one on the way. what are you waiting for get on the printing !!

I wonder how this stuff works on the form 2 in closed mode. Anyone tried that already?

Finally got that cartridge reset solution ready to ship out to users and it would be nice to recommend some good cheap resins with them.

Both the grey and the Tan use the same profiles. According to the instruction you select either Grey v3 or Grey V4. If using a Form 2, use Open mode.

So if you have some Grey v3 or Grey v4 cartridges, you can give these new resins a try.

As promised, here is a quick impression of the new resin. So far, I only tested the tan colored one, and only with small, but detailed models.

For my first test, I printed the same Orc Shaman model as the one above, but this time I only printed it at 0.05 resolution, rather than 0.025. And as far as I can tell, it came out better than the original. It’s especially visible around the tattered edges of his cloth, and the feathers and the horns sticking out. 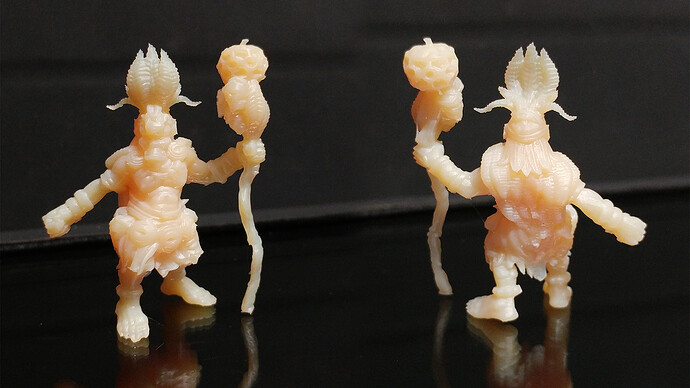 So last night, before going to bed I lined up 5 more miniatures and printed them at the same resolution. This morning I was greeted by these. I haven’t removed them form the supports, but from what I can tell, they look great. Here they are, fresh of the printer. 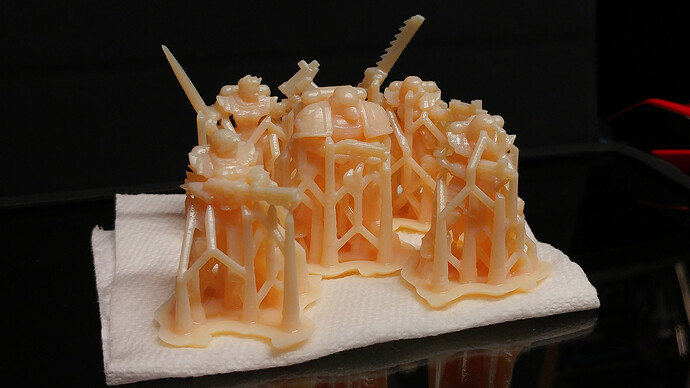 BTW, I used the Grey v3 profile on these. Since I use a Form 1+, I haven’t updated my Preform to the latest version, so I’m currently running version 2.10.2. This version doesn’t have support for Grey v4.

PS. As you can see, this resin is NOT translucent, it’s quite opaque.

UPDATE:
Here are the Sisters of Battle, aka Astra Sororita Militarium or Bolter Babes, removed from the supports and on their 25mm bases. They still require some minimal cleaning, and of course painting. 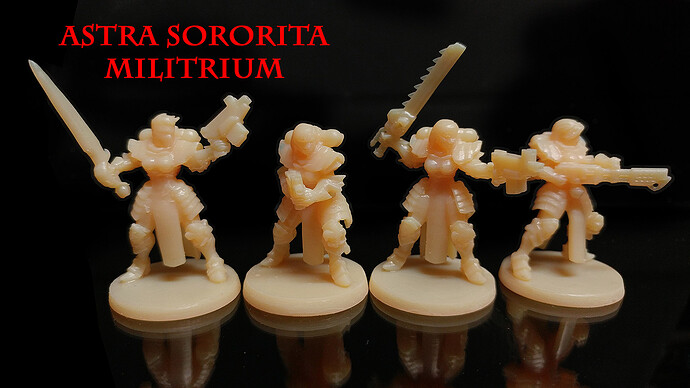