Although I am currently in a ticket about this with Formlabs Support (Excellent support by the way!), I thought I also ask the community for input.

My Form 1+ seems to have issues with faces that are angled towards the build platform. These faces come out saggy/blobby, while the opposite side, thus facing the resin tray during print, look excellent.
I’ve attached some images below.

In the screenshot it’s with minimal supports, but the actual foto’s are with default support settings.

Does anyone know what can be causing this? 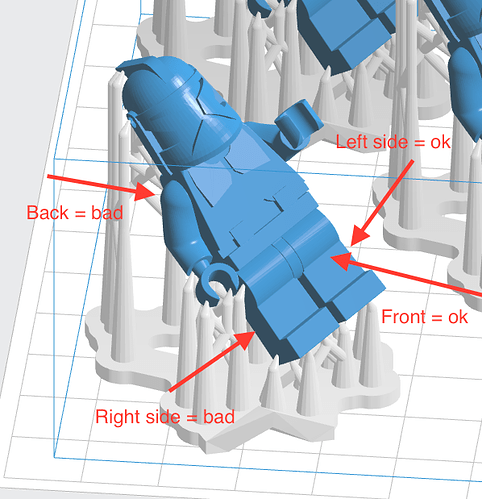 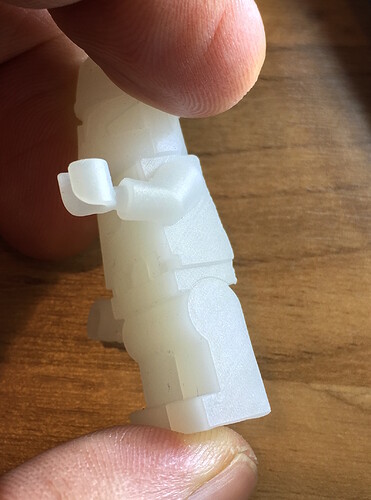 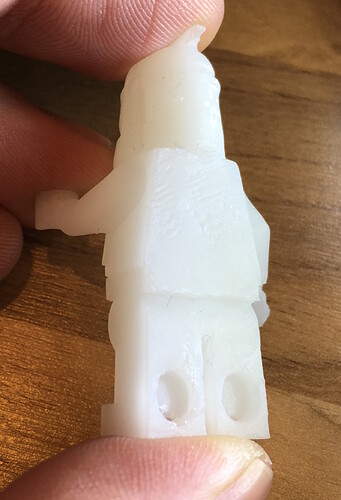 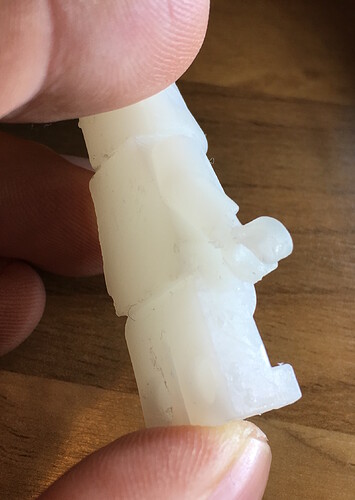 Awesome parts. I am a Star Wars Lego fanatic. Generally, the “down” side can have rougher surface finish if it is not adequately supported. I would suggest going into support editing mode and adding supports where you are seeing roughness. You could also tilt the part slightly towards standing up straight––maybe about 15º from vertical. Good luck!

The reason why those surfaces don’t look as good is because the light from the laser goes through the current layer. Downward facing surfaces will have a bit of resin on them so as the light goes through that layer it cures the extra resin on the bottom of the print.
Black resin gets the best detail since the black color blocks the light more than the other resins (one of the reasons I wonder why people choose Clear resin if they don’t need the part to be clear).
Best thing to do is avoid having details on the underside, if you can’t get an object oriented without details facing down, then you might consider splitting up the part so that you can get them oriented the way you need to. For example, I’ve got a piece that’s cylindrical with a bunch of details all around it, since I have to tilt the print that means some of the details are on the bottom, so instead of printing the whole cylinder I have to split it in half and then sand the edges and put the two halves back together.
Also try to use as few supports as possible, any point that a support touches will have to be sanded down anyway, but the support structure can make it more difficult for resin to flow off the print. You can also increase the starting height of the object so that there’s a bit more room beneath it and the base so that the resin can flow more easily.

Another way to improve the issue is to have as little resin in the tank as possible, so that there’s less of a chance of resin sticking to the print. I’m curious with the Form2 at what level the automatic system keeps the resin, ideally it would be as low as possible. The heater can also help improve the print since that will lower the viscosity of the resin so that it can flow more easily off the print.

Thanks for your extensive reply. I currently print both black and white, where both have the issue. I’m thinking of switching to gray, since with black and white it’s hard to see the details anyway, since there is almost no ‘shading’ on the model.
The temperature in the room that I print in is around 18 degrees C. Would you advice higher temperature? I could try to create some sort of oven to put the form 1+ in or something.

Our suggested operating temperature range is 18–28° C. You’re on the low end, so a warmer environment may help with the print.

Yeah, it would be better if it were warmer. What I’ve done in the past is before printing I stir the resin while using a heat gun on a low setting. Some other people have put a heating device inside the printer. Probably not a good idea to put the printer in an oven though.

I put a heating pad under the unit, on “low” and set the unit on blocks a few cm above the pad to prevent overheating the electronics. The resin is now at 22° - 25° when printing. The higher temp helps; fewer failures fer shur.

What do you think about the possibility to pour the liquid in to a disposable container. And heat it in microwave a few seconds before using ?

it will cool off too quickly to be of much use.

Probably a bad idea, plus you would need to turn off the light in the microwave or it would cure.

Oooo i forgot the light