It was a long wait but I do so like my Form 1 Overjoyed Crane! By the time I am finished typing this my final print from my first Liter should be complete, and my next just arrived! I have got somewhat of a feel now for Form 1 operations and expect my results to continue to improve as they already have. But I thought I would share the gist of my experience so far:

I think that about sums it up, now I just hope and pray that I can find some way to use my Form 1 profitably! Right now I’m trying to figure out how to price offering printing services and I’m going to try offering a scan & print bust service. Not sure what else but I need something to support my own new resin habit!

That’s a lot of stuff!

For removing a part from the build platform, I like to use a glass scraper with a replaceable razor, kinda like this one: 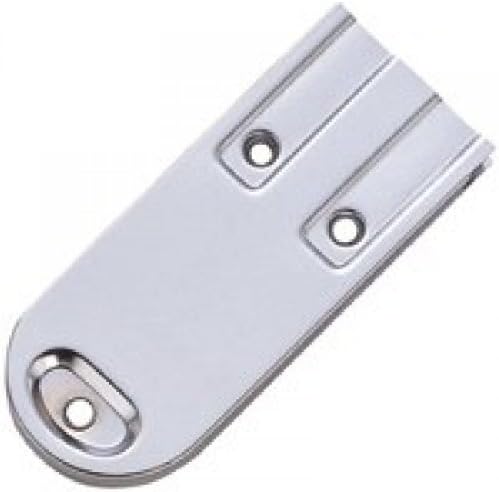 It’s a common tool available at the local hardware store. The blade is very thin but sturdy, so it allows me to easily work around the base of your part. After I’ve loosened the base up around the edges, I can slip the standard spatula under the part and pop it off without worrying about breaking it or hurting myself. Just keep in mind that this tool is a razor so you need to otherwise be very careful with it.

I came up with this and have gotten the best results with it because I can push down one end of the blade bending it flat parallel to the build platform and then instead of pushing it under the print I give it a twist so that the push down end goes under, and then I just work my way around the part twisting, like I’m opening a can sort of. Then I slide the scraper under the razor and pop the part off. Going all the way around with the razor first prevents me from breaking the part and from flinging it across the room. I just have to be very cautious when working the razor tool cut myself pretty bad a few times but now I’ve got it down to an art. Also the thinner width scrapper is alot easier to use than the one that came with the kit, I also sharpened the edge up on it a little. The process is kinda tricky one-handed but I finally got the hang of it.

I am now finding that using a dental “wax knife” works well, particularly with the size of the new quick release tabs being available.  But a levering action is still required (to some degree) and this must be leaving some scratches\marks in the surface of the build platform.

I have attached a photo of a (well-used) dental wax knife - there are two sizes - this is the bigger of the two.  The smaller one is some 20% smaller.

I am amazed at how well the part becomes attached to the build platform.

Ah, I see you’re already ahead of my comment. Yeah, starting off with a razor makes removal a whole lot easier for me too.

As for printing for profit, I’ve been thinking about this too.  My is primarily using the Form 1 for toy prototyping but we’re still working out exactly what we want to do beyond the designing and printing, and making money needs to fit in there somehow. We have some ideas but need to research the details. Sigh! Too many projects, too little time.

@ Craig  My build platform is pretty scratched up already, more like gouged up, I don’t make gouges anymore now that I’ve figured out my methodology and so far I haven’t had it cause any issues of any kind.

@Craig, because the razor is flexible, I’ve been able to work under the part without scratching the build platform. Trying to work with only the included spatula seems to cause more scratching, at least for me.

I don’t know if scratching the platform causes problems. Probably not, unless you’re talking about deep gouges. The surface of the platform seems to be slightly ‘rough’ by design, so I assume adding a few scratches is fine and probably to be expected.

@Greenlaw - same with me with regards to the included spatula - the first time I tried it everything went flying including the adjacent container of ip alcohol.  It was actually the spatula which caused the initial scratchings.

@ Vince - that’s good to hear about the build platform - I’ve kept using it without any apparent issues.  I also purchased a spare one just in case.

Greenlaw is correct, scratching will not effect printing and is to be expected over time.

@Jory - thanks for that - good news indeed.  Once I found the right-sized implement to fit the new quick release tabs everything became a lot easier.  Cheers

Oh, and thanks for posting the above info Vince. It’s always interesting and educational to read about the experience of other users.

@Greenlaw, No prob, I am in so many different 3D stuff & designing & like groups, & every so often I find some awesome info for free, & so I like to contribute what I can. But mostly I just like “hanging out” with people with similar interests! Since there are so very few near me to actually hang out with, groups like this have even more importance for me!

I still keep wondering; am I the only person that didn’t realize there was a sticker on the bottom of the resin tank?

@Vince - I missed it too. Only realised when I was checking out a spare resin tank I had also ordered/received. I have had some minor issues with dust particles inside the Form 1 and some particles on the mirror - I just need to gently “blow out” the inside to make sure all dust gone and be careful the mirror is spotless. Otherwise, Form 1 is printing very well indeed. Touching wood, and to date, I’ve not had any resin tank issues.

I agree.  It would be great if the protective film had a tab at one corner, preferably coloured, similar the ones you get on some brands of ink cartridges and many other protective plastic films. I started to pick at the resin level decal before realising that this wasn’t part of the protective film.

There’s a sticker on the bottom of the resin tank???.. I don’t remember anything about that in the documentation…

I’ll be checking mine Monday.

Well I’m sort of glad I’m not the only one, and I already told someone from Formlabs that they should have something saying its there and needs removed! I was hoping they would offer me a free or at least discounted liter for the one I mostly wasted, but no luck. Live n learn & all that…

Actually they do mention it in the manual under Resin Tank Preparation:

The text is from here:

But maybe there should be a paper sticker on the tape too since the tape is it’s clear on clear and not necessarily obvious.

We’re looking at using a different color protective tape, just to make sure that this isn’t a problem down the line. We’ll also work on improving our documentation. There is a lot of good information stashed in the support guides, but they can be a bit difficult to find.