I was doing some comparisons of print times between my new Photon Mono X and a Form 2 and I was using my installation of PreForm 2.10 which was one of the last to support the Form 1+, which is what I had.

Why, is it the printer, is it the rev4 resin compared to the V3? So then I changed the printer to a Form 2 and re-did the supports, as apparently Form 3 supports are not compatible with Form2 supports, and the print time was a little less 6:13 hours, but still much higher than what the earlier version of Preform was capable of.

So this begs the question, why such huge difference, for the same model print, on the same printer, using the same resin.

There have been a lot of changes in Preform between 2.10 and 3.12.2. As you noticed, one is a change to how supports are generated. That might account for some of the difference in print time (but likely not all).

The different resins might be a factor, although I recall Grey v4 is supposed to be identical to and interchangeable with Grey v3 (the only change was a different supplier for one of the ingredients). It’s possible they made some tweaks to the v4 profile since then which weren’t backported to v3 (I’ve seen that happen before for Clear - I think in that case I think the difference was corrected eventually in later versions but I’d have to double-check).

Note Grey v3 was apparently not even present in Preform until version 2.10.2 (see https://support.formlabs.com/s/article/Older-preform-releases). Are you sure you’ve got the 2.10 version right?

Another possible factor… when the Form 2 first came out I recall actual print times being significantly and consistently slower than those estimated by Preform. I suspect they improved the accuracy over time and that accounts for the large difference you’re seeing. (You can find some examples if you search that earlier link for the text “print time”). I’d be curious if you actually ran the same print with the older and newer versions of Preform, on the same printer, if the actual wall times are very much different.

Unfortunately you can’t have multiple versions of Preform running, but Yes, I’m 100% sure it was v3 I selected, so my version of Preform must have been something higher than 2.10, maybe 2.10.2, I suppose I can uninstall the new Preform and re-install the old one. Also if you take a look at the image above, the Preform 3 is also using a v3. The v4 is the same

I’s not the supports, I also did a test without any supports, ignoring the printability error, and it’s still way out.

Ok, just for curiosity sake I downloaded a bunch of preform versions and ran the test. This time I loaded the model, and just clicked the time estimate to print it without any supports. So the model is constant, the resin is constant, Grey v3, and the layer thickness is 0.05mm

So I went and downloaded the version just prior to 3.3.0, 3.2.3 and that one too estimated the time at 5:56h, so the actual change happens before this.

Short of downloading every version and running it, it’s safe to say that somewhere between version 3.0.0 and version 3.2.3, some major chnage occurred that increased the time estimates dramatically (~35-40% higher). 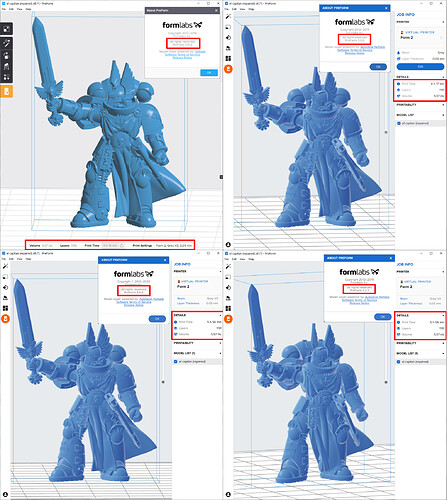 Hi. I share your impressions, something changed in between versions and seem to have impacted global print time. To assess the the various cycle times on my Form2, I have printed a clear resin model in order to see the laser firing.

So, Formlabs, could you please explain why those 1 minute 15 seconds at each first 25 layers ??

Thank you for sharing your experience with us; that definitely sounds like a some solid evidence that could be helpful for our troubleshooting. This is definitely a bit more complex than I can comfortable handle via the Forums, I would definitely advise reaching out to our Support team with this information, the serial name of your printer, and the date that you saw this happen so that we can check the logs and assist you further. Please do reach out so that we can further assist!