Thanks for your reply and explanation.

I believe an official notification or announcement regarding it will be better.
As you can imagine, Form 3 users are all struggling with this problem, but most of them do not know why it happens.
Frankly, I feel like that Formlabs is covering up this issue recently.

I could not find any official information regarding this issue.
Only few people on this forum can get this kind of important information.
I thought mine was defective. Many Form 3 users think like me.

I hope this issue can be solved soon.

+1 on everything JC says. I think he and I are getting very similar results on this part across all the resins we’ve tried.

Folks keep saying they can’t get tanks. After my first few prints I ordered 3 more tanks and got them swiftly. I had emailed support asking about the listed 3mo lead time on the website and was told that since I already had my Form 3 it wouldn’t be a problem, and sure enough it wasn’t.

Definitely not feeling confident Formlabs has a handle on the problem and a clear path to a solution. I’d been considering getting into 3D printing for some time and the announcement of the Form 3 was the impetus to dig in relying on the Formlabs brand to preorder it w/o waiting for reviews. It seems that may have been a mistake. Not sure if I should wait around for a fix or see if I can return it.

Usually, Formlabs announces a new update in a month, and the latest PreForm was updated on Sep. 19th.
I believe that they will find solution quite soon and that the mechanism of Form 3 seems better than Form 2.

Just I am wondering why Formlabs did rush to announce and begin to sell Form 3 although they did not achieve acceptable resin settings.

I believe our feedback regarding any print issue will be helpful to improve Form 3.

Now, I am trying to print test models with a different approach, because I like to see how the X-axis movement of the LPU affects the result.

@Joonghyun_Cho, thank you for taking the time to do these tests. Your results are representative of what I’m experiencing on my Form 3 with white resin.

I’d been considering getting into 3D printing for some time and the announcement of the Form 3 was the impetus to dig in relying on the Formlabs brand to preorder it w/o waiting for reviews. It seems that may have been a mistake.

Don’t beat yourself up too badly, I drank the same Kool-Aid.

Back when I upgraded to the Form 2, I hung onto my 1+ because it supported faster (0.2mm) printing with Clear. But the Form 2 turned out to be superior in every other way, and with the announcement of Draft resin that last advantage became mute. Meanwhile Form 1 tanks and replacement parts became harder to acquire, and the “lifetime” discount on resin bottles for Kickstarter backers ended.

As we speak, Formlabs marketing is making a big fuss about the improved print quality of the Form 3. Given the smaller laser spot and perpendicular beam with spatial filter, there seemed good reason to expect those claims to hold up. I also could have sworn reading somewhere (or hearing) print times were supposed to be slightly faster than the Form 2. I even spoke with a couple people at the user summit who had their hands on the printer before release and didn’t flag any major warning signs.

All that left me with a pretty good feeling - enough to grab my discount code and place pre-orders for both the 3 and 3L, and eventually sell my Form 2 along with most of its consumables (including a dozen or so trays). I wasn’t going to be caught on old, unsupported tech this time around, and made the decision to jump all-in to the new ecosystem. I figured there’d be some inevitable growing pains on initial release, but (at least in my own experience) Formlabs has generally had a decent reputation for customer support.

Reading this thread and a few others has me concerned. From what I gather it seems the Form 3 is slower, louder, smellier and (for the moment and at least for some types of prints) doesn’t match the quality of the Form 2. I really hope the print quality issues are just a matter of the software team dialing in settings for the resin profiles.

Thanks everyone for all the hard work to investigate and compare; keep the photos coming.

Yes, Formlabs has done the great achievement for Form 2.
I believe they will do their best for Form 3 and Form 3L too.
Formlabs is one of the most reliable companies to me.
I think they need some more time at this moment. I like to wait and give them the time.

I appreciate all the optimism. Good to hear the journey w/ Form 2 was similar and ended well. There is certainly a lot to be impressed by in the Form 3, and it makes sense that the new tech should perform better when dialed in. The surface finish is quite remarkable, esp in clear resin.

I did that same print in .025 btw this this result. It’s pretty comparable to the .05 results I got earlier imo. 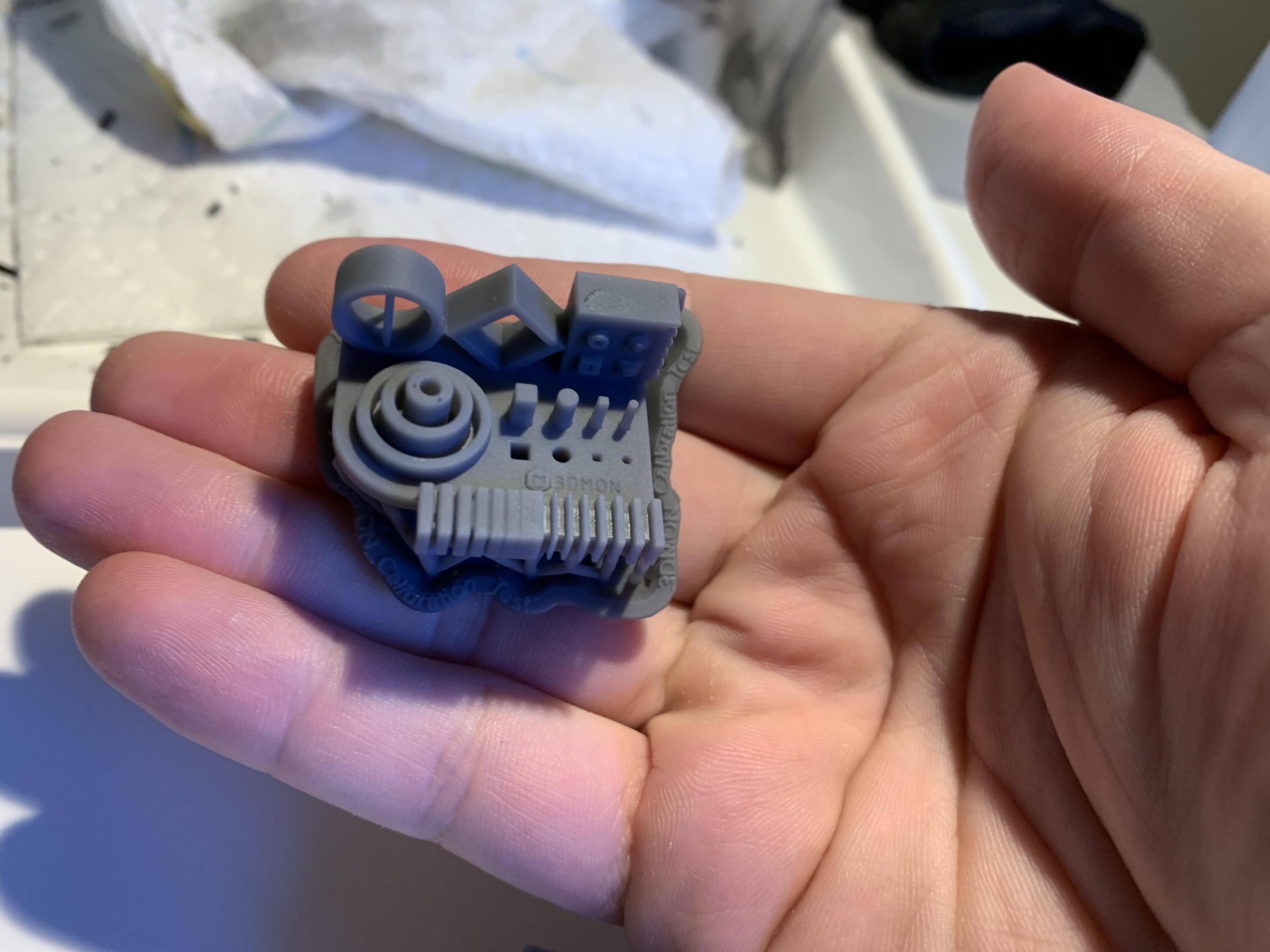 Not impressed with my Form 3 either. Apart from the issues highlighted about it is much noisier than my Form 2, a lot slower to both get ready to print and to actually print. Wish I had bought 2 more second hand Form 2’s rather than the Form 3 now.

Oh! The new version(3.1.2) of PreForm was released today.

I am going to test the new grey resin setting.

This is a test before the recent PreForm update(v3.1.2).

All models are flat, not with an angled orientation. Flat layout seems better than angled.

Gaps parallel to the LPU movement direction are clearer.

This is the result of the recent PreForm version 3.1.2.

It seems to get a little better than 3.1.1, but not enough for my expectation nor even close yet to the result from Form 2.

Why do I keep doing this???

Therefore, it has to have some other outstanding merits.
O.K. The design is great, and I love its several new functions.
However, I hope the print quality at least can be remarkable after tuning up the resin settings.

I think that you’re correct that some of the slowness is due in part to the LPU movement, but I think that one other reason is the smaller laser dot.

The 85 micron dot is 40% smaller than the dot of the Form 2, so it stands t reason that the laser has to spend more time to fill in the same area as before.

So unless they figure out how to dramatically speed up the one galvo (X direction) and the LPU movement (Y direction) I don’t think you’ll see much improvement on the speed.

Here’s the test print on my Form 3 in White V4. I didn’t take a very good picture, but as you can see, the small holes are completely filled in and there is no gap between the shapes along the back.

.1 or .05 resolution? I just did a .1 and it looks about the same as yours (hard to tell where yours filled in on the front though) but was going to do .05 based on results from above. Won’t run it if you did .05 though.

Form 2 below on left, Form 3 on right. 0.1 resolution. I think this demonstrates that my Form 2 need some maintenance more than the Form 3 being way better. My results are better than Joonghyun’s from post 17 above though (for Form 3).

Thank you for your efforts at Formlabs. Nevertheless it is very disappointing to me that I’m used as a beta-tester when buying a newer machine that is supposed and announced to be much better than the old one.

To those having issues with speed and noise, are you running the latest firmware (1.3.4)? We changed it to turn the fan off when the printer is idle and have been working hard to speed up print times.
https://support.formlabs.com/s/article/Firmware-Release-Notes

@piGuy Your result looks almost the same as mine. Current software settings seem to be over-curing, such as strong laser power with slow scanning speed?
I doubt that the better surface quality which Formlabs has put up also can be affected by this over-curing.
Let’s wait for the next PreForm and Firmware.

@gjgomes
Your Form 3 result seems similar to mine too.
This quality can’t be accepted by my field. I am wasting my time and resins with this current print setting. Perhaps you all too.

Also, your Form 2 has some serious issues.
You would better check any contamination on the galvo mirrors and the main mirror. If you use a regular resin tank(not LT), the foggy silicone surface can cause the issue.

You should be better to contact Formlabs for further instruction for it.