Since recent move to Model resin I’ve been printing mostly small items at 25/m. Quality was acceptable but not impressive and definitely not better from Black V4. Only after I had to print few larger parts for a client, also at 25/m, I realized there is something seriously amiss with either the resin or my printer. Just look at attached photos. Part was treated with gray primer to better show features.

This reminds me of situation back in January and February 2020 when I was using Standard Gray resin and couldn’t print anything at 25/m or 50/m without horrible surface artifacts and poor resolution. Only after several consecutive updates to Preform those issues were mostly resolved. Not all but many improvements were implemented at that time. In fact later I switched from Gray to Black V4 as it seemed better optimized for highest resolution.

Now I feel like I’m back in time and very surprised at that. Is it possible that Model V2 is not properly set up for Form 3 printing. I’ve seen people getting good results with Form 2. Or could be there is another explanation for what causing it… I’d love to hear your opinions.

I can’t afford constant testing and retesting and need get moving on with orders. At this point I’m ready to go back to black which means I have to wash my resin tank and reprogram it to black. I’ve never done anything like it before. Would appreciate suggestions how to wash a tank and avoid causing any damage while doing it… 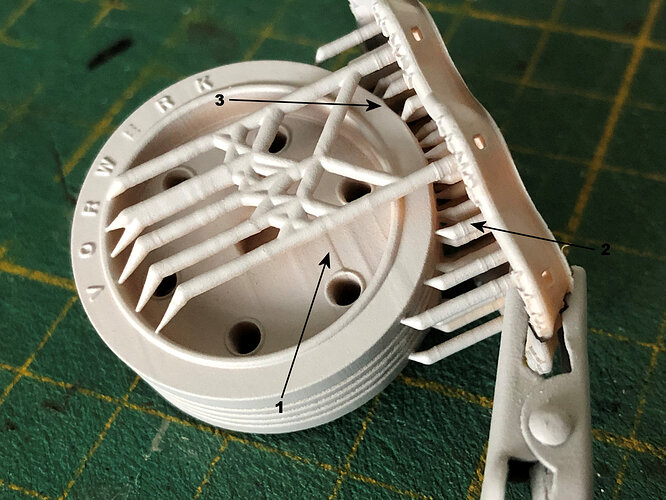 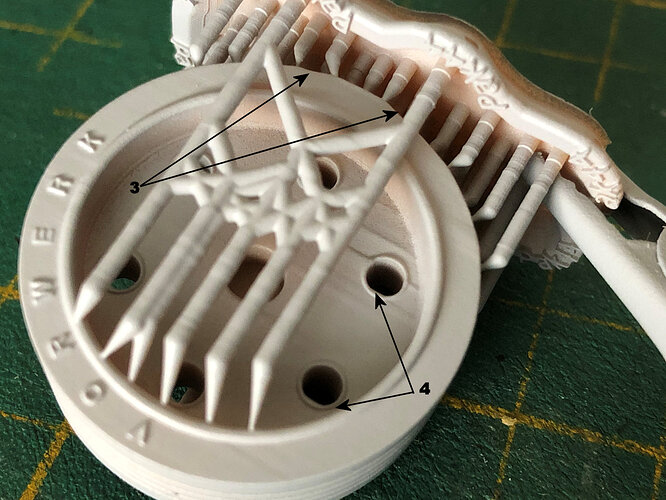 I suspect your instincts are correct; these look like the “usual” Form 3 issues I’ve seen as well - for all resins when it was released, and still today for certain resins (e.g. Clear).

Since you’ve documented it so well, I’d say it’s definitely worth opening a ticket with Support. If nothing else, it might underscore that they need to put some more tuning effort into Model. (I’d love to hear if anyone else out there is seeing better results with that resin).

Form 3 tanks are harder to clean out than Form 2 ones. I’d drain it then use a plastic scraper (such as one piece of the 2-part scraper replacement tool that came with the Form 3 finish kit) to wipe as much as I can. The good news is since you’re moving to Black, a few drops of contaminated leftovers is probably not a big deal.

I agree. Regardless of the cause, it’s worth talking to support. They should be able to help, and whether they can or not, it’s worth letting us know so we can put resources towards fixing issues like this(if it is indeed due to a software issue).

The problem of this printer is the price of 4k €… printer LCD for a price then times cheaper works better!!
When a machine runs good you need 22 updates since 2019 July.

When you contact the support only came bla bla bla … is send them files for printing and the quality of the from Formlabs printed models from me are poorer than my at home.
After many dissuasions , the support means that they had problems with the machine, but the want to fix it with updates (Beta version etc.)

At the moment you only can print in 25micron black v4 , the other standard resins you can throw in the trashcan!!! That is the reality

Question to all from Formlabs who also read here in the forum , when do you think to fix the problems???

Thank you guys. I followed your advice and opened a new ticket with tech support. Will report back if I learn something new.

As for the tank cleaning, I’m not entirely clear here, should I wash it with IPA or just dry wipe. My concern is that IPA might adversely affect film at the bottom. Not exactly sure. And than of course reprogramming tank chip for the new resin, is it something done automatically the moment black cartridge is inserted or do I have to go manually, I guess inside PreForm…?

Remove wiper and scrape as much as possible out. If you use a small round ended spatular you can do it very well.
As the other person pointed out, seeing as you are now using Black, a little bit of the previous resin isn’t going to make too muich difference. There is a menu option in the Form 3 to reprogram the tank, there is a scrollable resin menu to choose from.
Re IPA, its approved for cleaning the underside of the tank (unlike Form 2 which needs that Nova cleaner), I can’t find anywhere re the inside, so like you say I would also be cautious about it. However I would point out that the reason paper towels and tissues are not recommended for cleaning glasses is that its a wood based product and microscopically scratches, so on that basis I would not use them on the inside/outside of the tank.
It does say not to use IPA inside the tank, but I am pretty sure thats to keep the glue intact at the join.

Why exactly do you need to print at 25 µm? If this piece is going to be painted that resolution is overkill.

The faults 3 & 4, and possibly the others, are a direct result of the piece being built in that orientation. Turning the round so the the diameter is in the x,y plane will give an almost perfect top surface, however the build plate side will need a lot of supports or will need more than a little sanding. It really depend on whether this is a double sided piece or you can sacrifice the finish on an unseen side.

Thank you Delta. Most appreciated. Your recommendations pretty much go along with what I received from Formlabs support. Good thing I asked or I might have gone with IPA for hard reached corners. I think IPA is safe on wiper as long as it is bone dry before going back inside the tank.

billb you are probably correct but I’m printing many other small and highly detailed parts that need 25/m. In this particular case my client specifically requested it.

Final reporting.
In the end I am not exactly sure why the poor print quality occurred. Formalbs Tech suggested it might be bad batch of resin. They even offered new resin cartridge to run some tests. As always their tech support people are A1. But since I gave up on using Model resin and started printing with black V4, including cleaning and reprogramming the tank, I’ve never followed up with more tests. In fact I took them on their offer except I picked liter of Black…
Time to move on.

Id love to hear if this has changed in a year?

Not on my end. Still using black v4. A bit tired of this black color. With the next cartridge I might actually switch to gray v4 assuming it’s quality equals that of black. One year ago, based on my own experiences, black printed better quality small detail than gray. Alas not interested in Model resin any longer.

Don’t feel bad - I was checking out the technical spec datasheet for Model V3 and noticed some of the properties didn’t quite hit those in the previous version (e.g. ultimate tensile strength).