About a year ago I printed parts with very intricate detail and they would come out perfectly. I used the exact same files several times and over time the customer started complaining that the quality was going down.

The tiny holes and slot in the inside would come out perfectly at 50 and 25 micron prints. Now I have a very hard time keeping the inside holes open and all the slots are closed.

What I did to find the root cause:

The second printer gives better results so it must be the printer itself.

Did print settings in the firmware change the last year? I noticed with other prints as well that they don’t come out as sharp as they used to be. I opened a topic earlier about delaminating tanks. This never happened before and now it happened to three, that’s why I suspect it would be firmware related.

How the parts should be and were before:

How the parts are now(color is a bit different, this is fresh out of the IPA):

Edges are just not sharp anymore. Is this a laser issues?

How can I test/check the laser beam?

How the parts are now(color is a bit different, this is fresh out of the IPA):

And also a new tank?

New tank, new cartridge(shaken for a few minutes), cleaned the glass window with IPA and is stain free.

Edges are much more rounded than before, which leads me to think there is something with the laser beam.

If you haven’t opened a ticket with FL on this, you should. They will help you troubleshoot it.

It’s interesting to note that I found to have the same problems with the white resin…!

Maybe this is just a coincidence(which I hope cause I didn’t read anything in the change log about it).
Before the last firmware update I was able to print below piece perfectly and they came off easily from the platform.

Now after the update something weird occurs:

The space between the thin curved feature and side wall is now filled at most parts.

Oh and some parts come out just -slightly- better than others.

Could there be too much play in the build platform spindle / linear slide? I’ve printed large parts before and saw that the platform moved sideways quite a bit before coming loose of the PDMS.

It seems that when I print 20 parts, maybe one of two come out “OK” but not as good as before.

Yeah, there’s something going on, the top of the print should be coming out very sharp

Tested on another machine and they are fine.

I just checked and there is no dirt or dust on the large mirror. So only thing that’s left is the galvo and the laser.

Interesting to note though is that since recently I always find a thin layer of cured resin on the front right of the build platform(about 2x2cm). I never understood where this comes from but it seems that when you start a print, the laser is calibrated. You see a strong laser spot on the front left of the tank. Exactly where there is a layer of cured resin!

Do others observe this as well?

Has anyone printed the optics test file before? How were the results?
Below my results. This looks awful.

You can clearly see that cured resin on the platform on the first picture. This is where the laser is when it is(I assume) calibrating before printing.

It seems like the output power of the laser is way too high?

Did you change to the new version of black? It’s more grey now.

No, I used the same version.

After the last test print, formlabs tells me it needs to be returned to the factory for repairs as the laser is not outputting enough power. This however sounds counter intuitive as some gaps are closed which should be open.

It seems like the output power of the laser is way too high?

What’s more likely IMO is that the driver circuit that controls the laser is flakey. The hash stuff on the build platform looks like what you’d get if the laser was still turned on a little when it was supposed to be completely off.

This only happens at one point on the build platform. When you start a print you can see the laser scanning all corners(I suppose for calibration). Before this, it will stay front left for a few seconds. This is where this cured material is.

Anyway, formlabs support told me the laser is not getting enough power(which could indeed be a driver thing). The machine is still in warranty and they will pick it up for repairs. Great support so far!

We are getting an issue similar to this too. (We got our Form2 early this year and it’s been used a fair bit). The issue seems to have sneaked up on us over time and reached a point where it’s noticeable on most jobs, not just the really detailed ones.

We cleaned the glass with DSLR cleaning stuff yesterday, and changed the resin tank. It seemed to help, but not fix the problem entirely.

Our ‘gut feeling’ is that the laser seemed a bit out of focus, which I guess could give a similar effect to smudges on the glass. I plan to test whether it is more obvious on certain areas of the bed, I will post my findings.

Could you try printing below file?
It’s what formlabs requests you to print to confirm if it’s a laser/optics issue.

I believe the laser module they are using doesn’t just go out of focus since the lens is fi
xed focus. It might be possible the power brick isn’t outputting the proper voltage OR maybe there is a haze on the optics inside on the mirrors and/or lens.
I know the system is sealed but how air tight is it?
Just some thoughts.

The laser is controlled by galvanometers. This is “open loop” control, there is no feedback, no sensors to tell the printer where the beam is. The calibration is one-time only and it’s done at the factory. The mechanism is similar to what moves the needle on you car speedometer, or in an analog voltage meter. Deflection is proportional to Voltage.

But the laser light diffracts through the resin between the build plate and PDMS. Even on the first layer of the print. Even with the laser painting the back of the build plate, a little light will still be visible around the edges at the sides and front. I think this is what you’re seeing.

Remember, any resin that gets hit by the laser will be cured (at least partially). Painting the corners of the build plate when the print isn’t occupying those spots would result in excess cured resin at those locations sticking to the build plate, or pieces of partially cured resin that fall off during the peel and float around in the resin.

I know the system is sealed but how air tight is it?

The system is sealed but not air tight. The machine is not assembled in a cleanroom as well. So it’s always possible that dust gets on the mirrors. But a lot less than on a F1.

The laser is controlled by galvanometers. This is “open loop” control, there is no feedback, no sensors to tell the printer where the beam is. The calibration is one-time only and it’s done at the factory. The mechanism is similar to what moves the needle on you car speedometer, or in an analog voltage meter. Deflection is proportional to Voltage.

That’s not true for the Form 2 printers. The galvanometers are closed loop. See the disassembly of one of them below. They are custom build and have photodetectors to measure the angle. 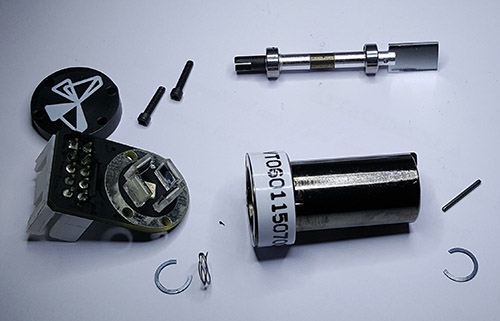 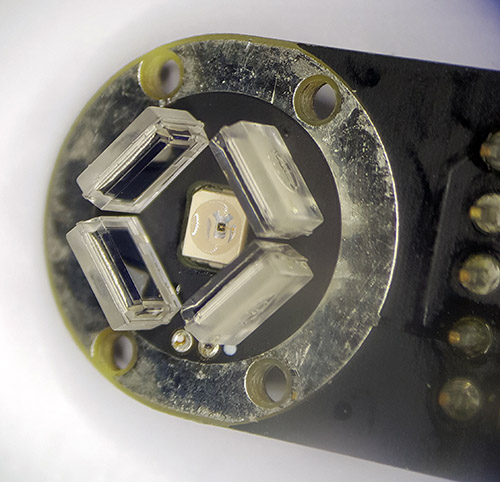 There are also four photodiodes on each corner of the bracket that holds the tank:

I am 100% sure that I am not looking at diffraction of light.
At the start of a print, the laser clearly goes to the D1 photodiode for several seconds, then scans the 4 corners and then starts curing resin. This only happens at the start of a print and only at the location of D1 I get cured resin on the build plate. This is totally independent from the part or resin I print with or the location of the part. The shape of the cured resin looks very much like a laser flare. Every layer starts with scanning the four corners before curing resin.

Look below the tank for yourself when you start a new print and you’ll see a repeating pattern. It’s not painting the corners of the build plate, but touching the diodes on the bracket around the tank.

I agree that the laser beam isn’t interrupted by dust but it might be possible that the main mirror has a haze on it. This can happen with voc’s in the environment.
If that isn’t the case then maybe the voltage is dropping from the power brick? A bad capacitor might do that on the power supply as it may work fine initially then as the power stays on the voltage drops off. FL is smart to use an external power supply. I suppose it might be easy to test with a meter.