I have an odd print failure and was wondering if anyone had ideas of what happened. I was printing 20 copies of the same part at once on the build plate but had 3 parts fail. The raft printed but then in one spot 1/3 of the middle of the print failed but the rest of the layers above came out fine. 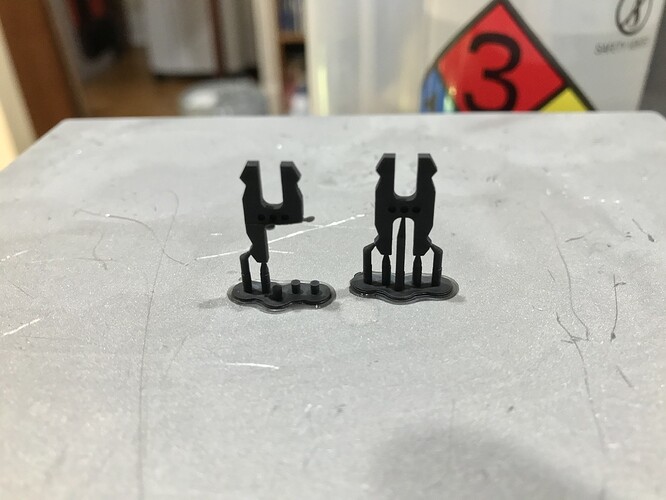 The one on the right is the final part the left is one of the failures. Any suggestions on what might have happened?

It looks like those three supports failed before even reaching the contact point to your model. Are the failures localized? i.e. If you print something else in the same region of the tank, does it similarly fail?

I’d start by inspecting the tank film for any cured resin from previous failures or other damage in the vicinity of the failure. It might be worth filtering the resin in the tank through a fine paint strainer before making another attempt.

Conversely, if you do a print with just the three failed parts (in or around their original location on the build platform) and none of the others, and it works, it could indicate you have too much surface area for the peel to be effective. But given the size of the parts, I doubt that’s the case. I think the Form 3 should be able to handle 20 of those in a single go.

You can also open a ticket with support if you haven’t already, to get their advice.

From your picture I thought the failed part and successful one were oriented and aligned the same way, right beside each other along the same “row”. I would definitely print a part like that perpendicular to the LPU and mixer (parallel to the front of the printer), as you suggested.

You can think of it as the part being more “resilient” to longitudinal forces and more easily pushed over by lateral ones, if that makes any sense.

Just to make sure - you used the PEC Pad and IPA on the underside, i.e. exterior side, of the film, right? (You probably already know that you should never touch the inside surface of the resin tank film with anything but the tank tool). Also be careful bits of PEC PAD don’t stick around on the rollers (I’ve seen fibers come off the pads before; often I use a blast of air to make sure they’re cleared).

Are you having better luck after the steps you took and with the new orientation?

I’m still kind of surprised the part failed before the supports were completed. If it were solely due to peel forces I would have expected the failure to occur a little higher up, but admittedly I haven’t seen this specific mode of failure yet myself on the Form 3.

Yeah I only cleaned the outside of the tank. Sorry for the confusion I took the pictures after removing everything from the plate for clarity.

The print after that one went fine, but I’ll have to wait to retry those same parts. My last print started making some odd sounds and support is sending me a replacement roller holder for the LPU which I should get next week