A few years ago, I started work on a Scale Model E-100 Superheavy Tank Project which made great progress in the past few weeks through sheer brute force bringing me close to an end aaaaand back to the beginning that is the SLA 3D Printed Tracks and today’s question:

Q: Can the Resins ( Grey V3/4 in particular ) be post Dyed with something like Rit Dyes for surface penetration without impacting their performance? 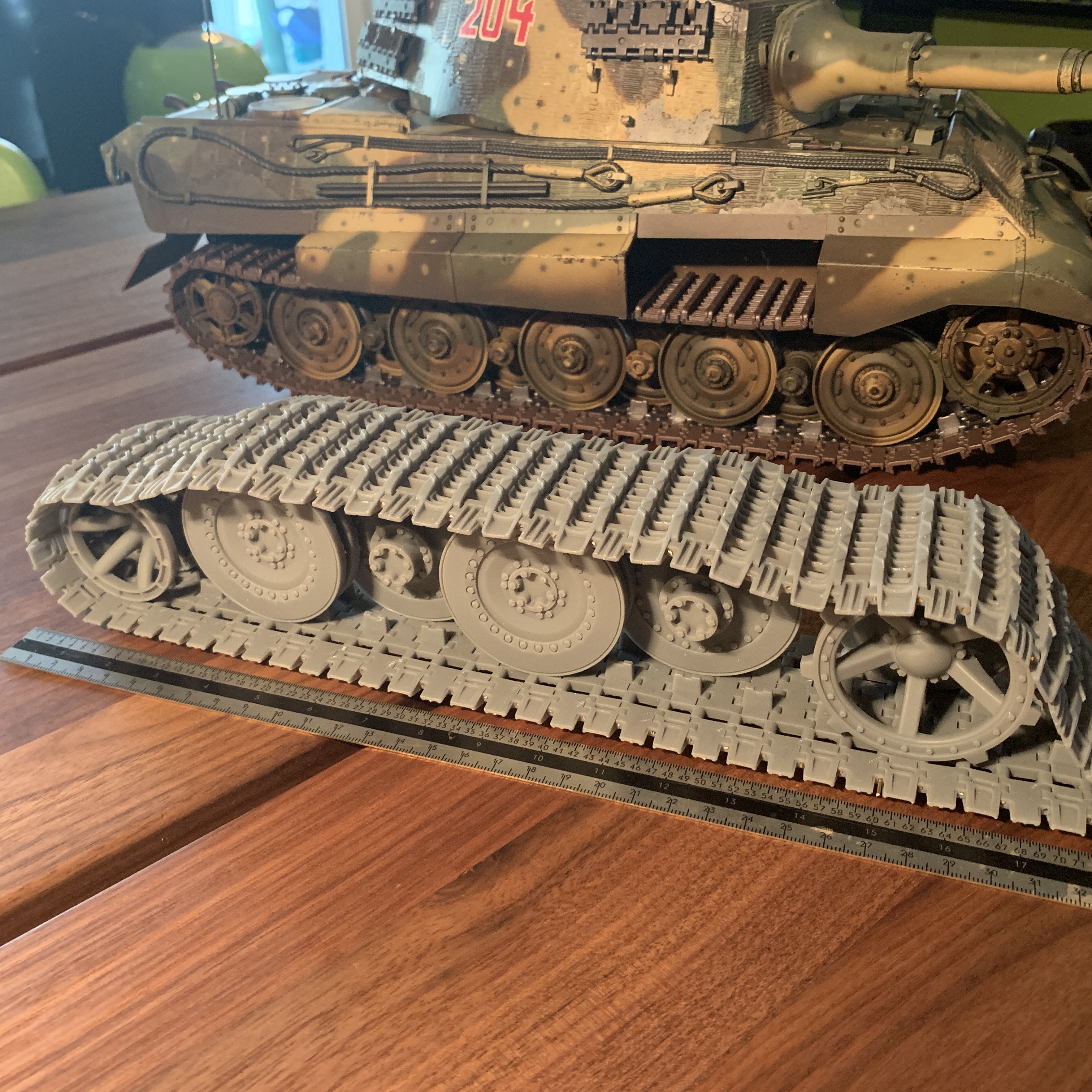 ) exposing the light grey Resin Color again which I’d like to avoid as it would be a high contrast against the rusty brown colored tracks.

Thanks for reaching out! I am very impressed with the printed tank treads, I love the detail on there! I will say that I am not personally familiar with using Rit Dyes and typically opt into using acrylic paint and an airbrush to apply base coats, while hand-brushing on details.

If you could elaborate a bit more on how you have been using this Rit Dye (I saw in your comment you mentioned it being cooked while dyeing?) then I can either provide more information or reach out to our Materials Team to see if they have done any research on this matter. While adding dye to our liquid resins could alter the chemical composition of the resin, I believe that fully cured Grey resin should be able to hold up pretty well after the fact.

I look forward more to hearing back about your use-case so that I can provide more helpful information. Talk to you soon!

The model is going to be painted with Model typical Acrylics and Lacquers ( Tamiya / AK Interactive ) and has since also been enhanced with Tamiya Putty ( Basic Type ) and Tamiya Epoxy Putty ( Quick Type ) which both adhered nicely to the recently used Grey V4 Parts ( Gun Mantled / Engine Deck Parts ) without issues but none of those will be suspected to any excessive wear unlike the Tracks hence my question regarding the Dye process which I hope would achieve some deeper color penetration?

Could a dye even penetrate deeper into an already cured Resin? I’m not expecting it to fully reach the center but maybe like half a millimeter deep? Just enough for a scratch not to expose the natural color of the Resin. Not much use to go that extra mile if it will only turn out to be a surface color like with spray on paints

To be honest I’m not actually familiar with Rit Dyes myself.

AFAIK it is normally used to dye clothing, but my source of knowledge about it is tied to it being popular in the hobby grade color anodizing process of Aluminium where you - after a material specific preparation - cook the object it in the dye to I guess activate the procedure.

I guess if Formlabs Resins have a limit of up to say 80°C one should obviously remain below that? Any knowledge regarding Grey V3/4?

Thanks for sharing more of the information behind your finishing process thus far; I personally have been using a lot of Vallejo brand acrylics but have dabbled a bit with Tamiya as well. According to a colleague of mine, you should be able to dye Grey resin with Rit Dye by just following the instructions provided with it; adding your parts to the boiling water and adding the dye according to their specifications.

Since this isn’t something that we do when testing our resins, I cannot say for certain if this will affect the long-term performance of the material but since there is a pretty high heat tolerance to our parts (and no fear of it melting) then I would say that you are very likely to have pretty good results! If you do end up going that route, I would love to see how the parts turn out! Our Materials Library does have more information on Heat Deflection specifics, and Grey is considered one of our Standard Resins, so you can check for the guidelines there.