D’oh! Sorry to hear the supports were inadequate. Like I said I haven’t touched it in a long time (it’s from back before Preform even had internal supports). Gracias for running it (and hope you manage to find that floater)!

@Ante_Vukorepa so with all these prints under your belt now, what’s your feeling on support requirements vs the Form2, Can you print objects on the Form3 with fewer supports and smaller contact points than the same object on the Form2?

Yes, i usually printed hollow, thin-walled prints at a minimum of 0.4mm touch-point size, often 0.45mm on Form 2. With Form3 this drops to 0.3mm.

Like i’ve said somewhere in the first few posts, it’s not magical, and it’s not like supports suddenly become a non-issue - it’s an incremental improvement. One thing i kinda hoped would be much less pronounced with Form3, but isn’t, is the tenting around supports.

Decided to print a resin tank comb to fish that floater out, and to test printing large objects at the same time. 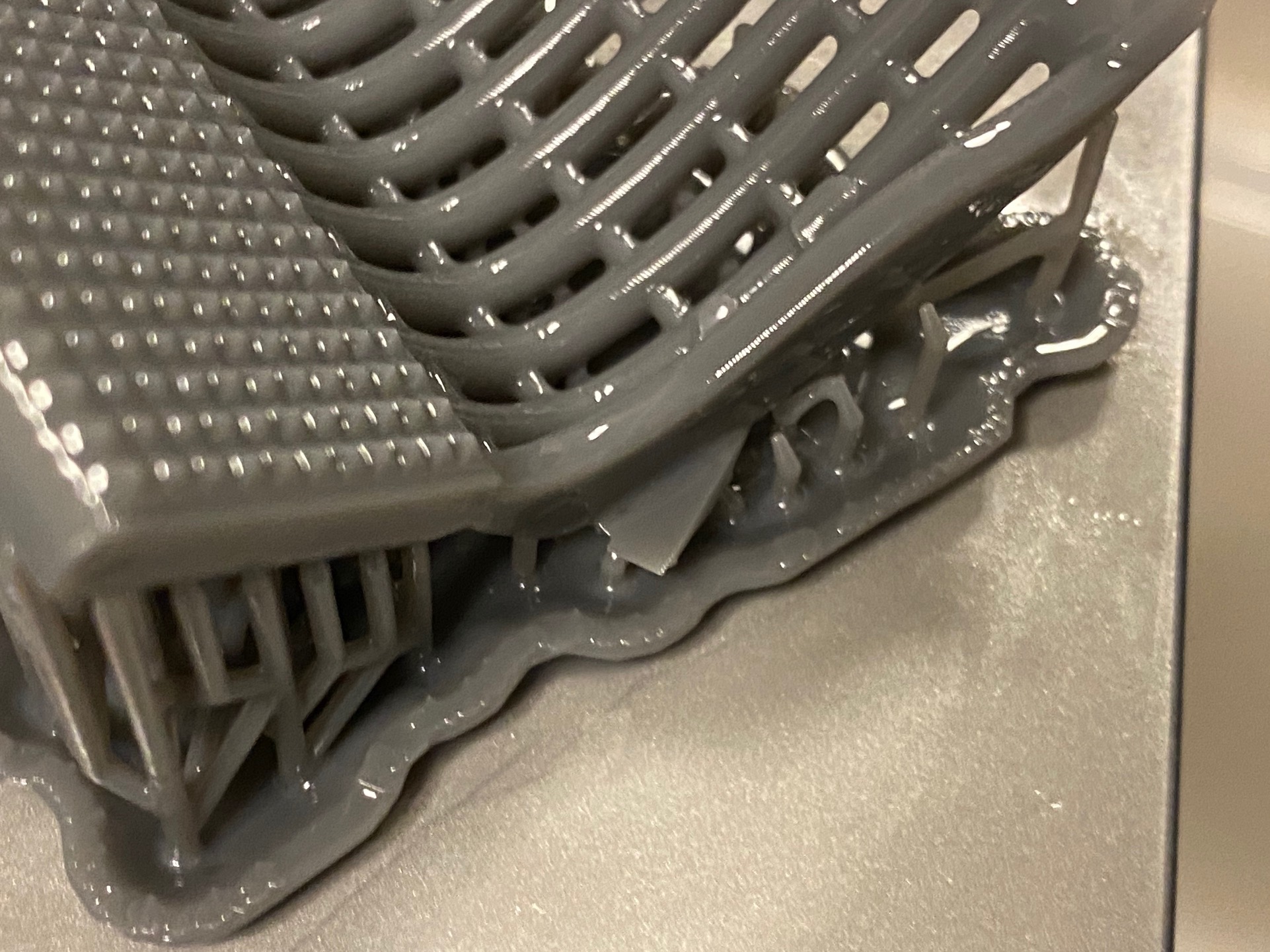 I guess it fished the floater out.
While being printed.

The thing embedded into the comb wasn’t the floater, it was part of the comb itself that broke off during printing. I fished out the actual floater with the comb after it cured (and after i sanded it down so the bottom and front edges are nice and soft).

The reason the bit of comb broke off is due to lack of support at that edge which is the interesting bit here… I printed this at 0.80 density and 0.35mm touchpoint size. After the wash, it took very little effort to rip the comb off the supports - no need to force or cut anything, it just separated cleanly. Yet the comb itself is about 140 x 60 x 45 mm, so even though it’s not exactly a full volume, it’s still a significantly sized object.

I’m still using aForm2, but with Preform 3.1.2 I can use 0.80 density and 0.30mm touchpoint size. Using these settings I find the Preform varies the size of the touchpoints, putting larger ones close to the raft and smaller ones further away. What Preform has also started to do is to not accept touchpoints on minima if it thinks that the selected size is too small for the location. So, if I try to put a 0.2 or 0.3 touchpoint on a red minimum the red warning will stay in place until the size is increased to maybe 0.4 or even 0.5

Testing out Preform 3.2.1 with the latest firmware.
Results in a bit when i process the print, but so far… 100um gray seems slightly worse than before, not better.

It wasn’t faster either, despite claims of increased speed.

54 minutes on old Preform/firmware, 1h 0m on the latest.*

Edit: * what’s interesting is the ETA on the printer changed - it now claims the test print should finish in 39 minutes - but in reality, it takes exactly 1 hour, 6 minutes longer than before. If i were a very cynical man, i’d say the “improved overall print speeds” are purely psychological 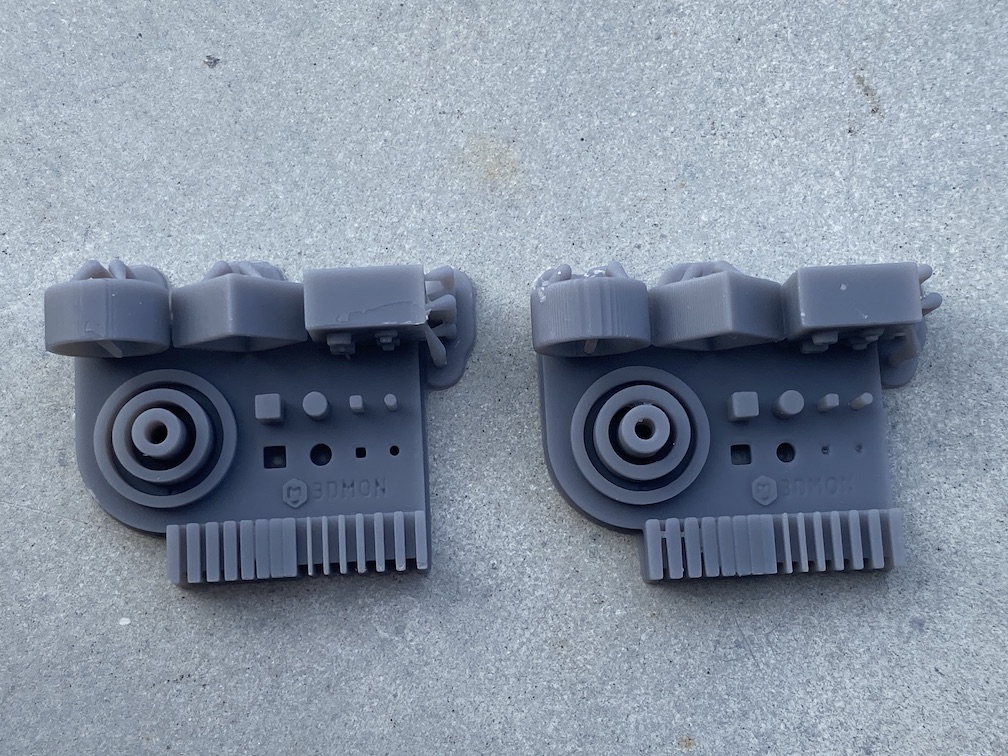 Same, but photo in the same light as here so you can compare them more easily: 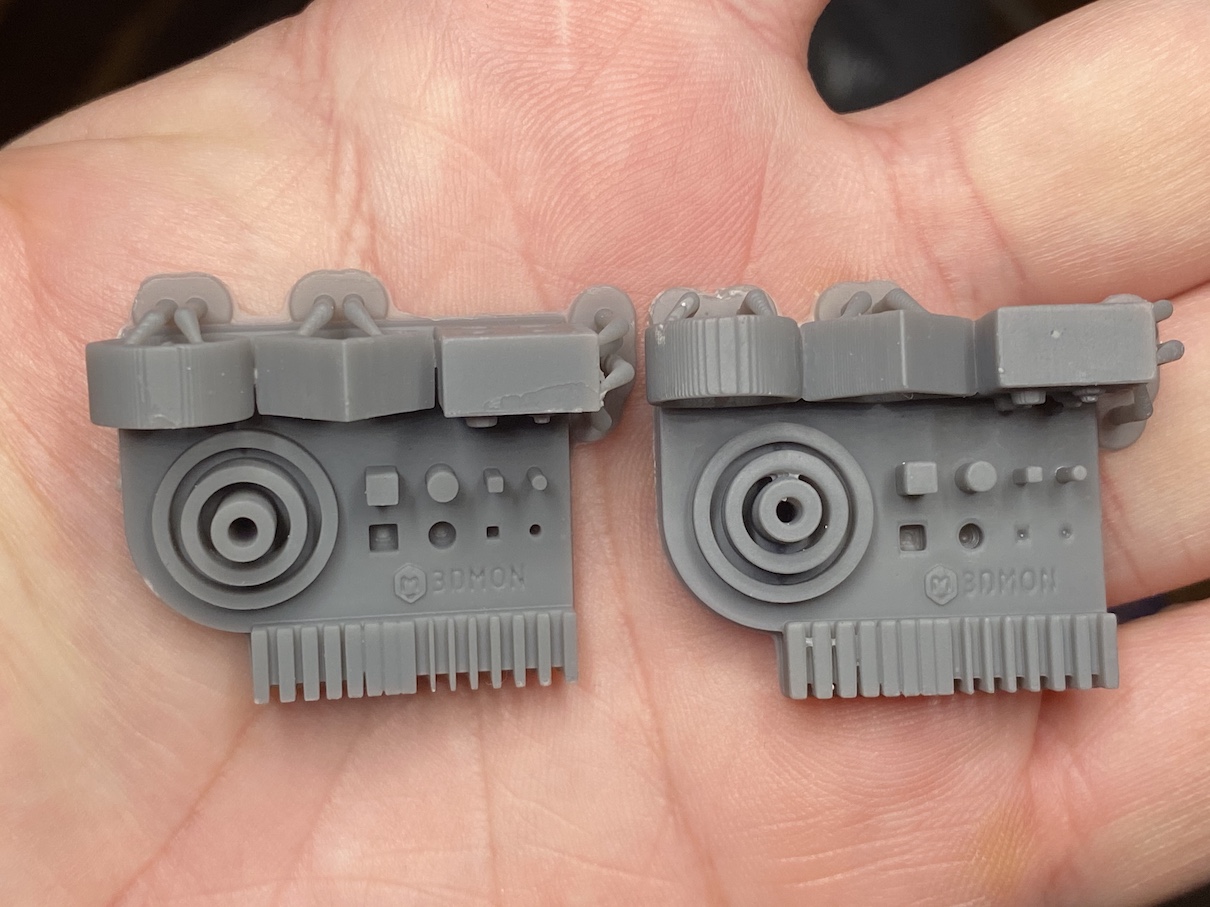 There seems to be some delamination happening on the last layer now at 100 um: 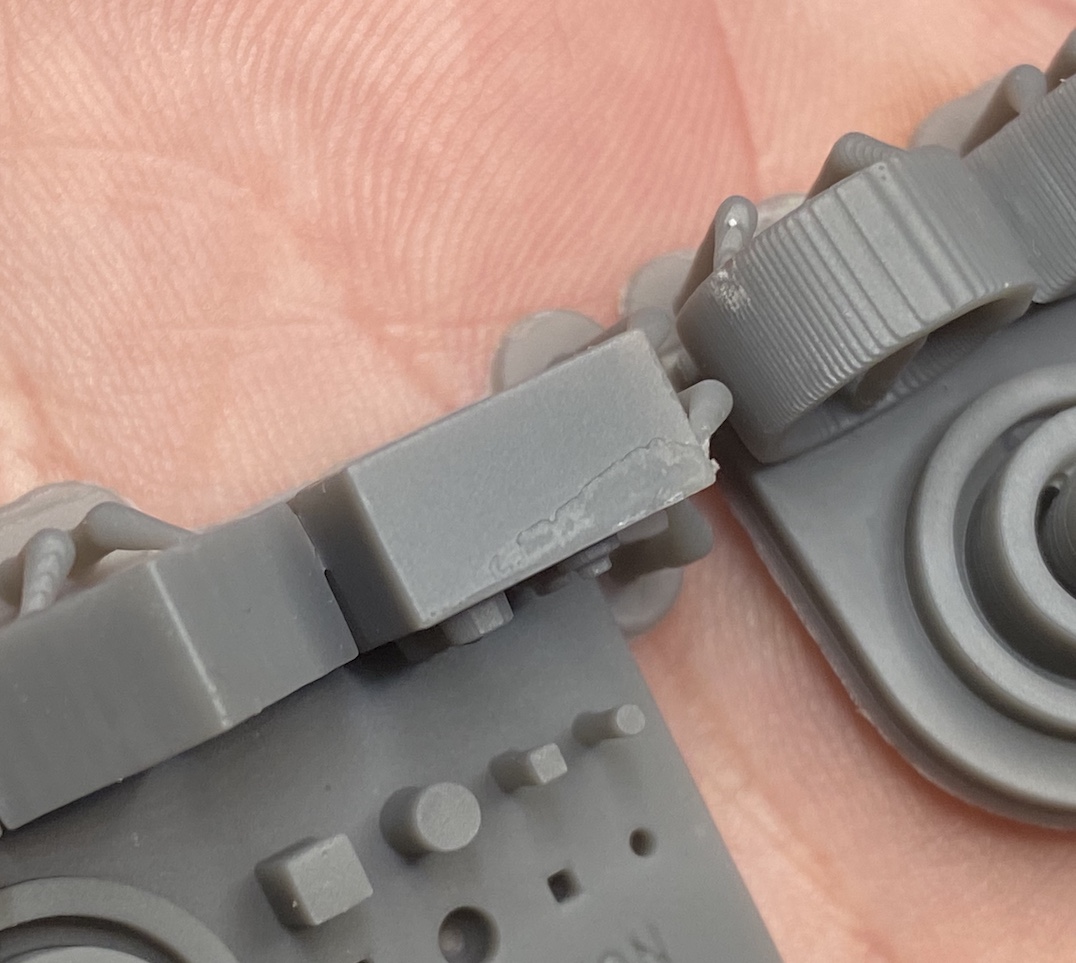 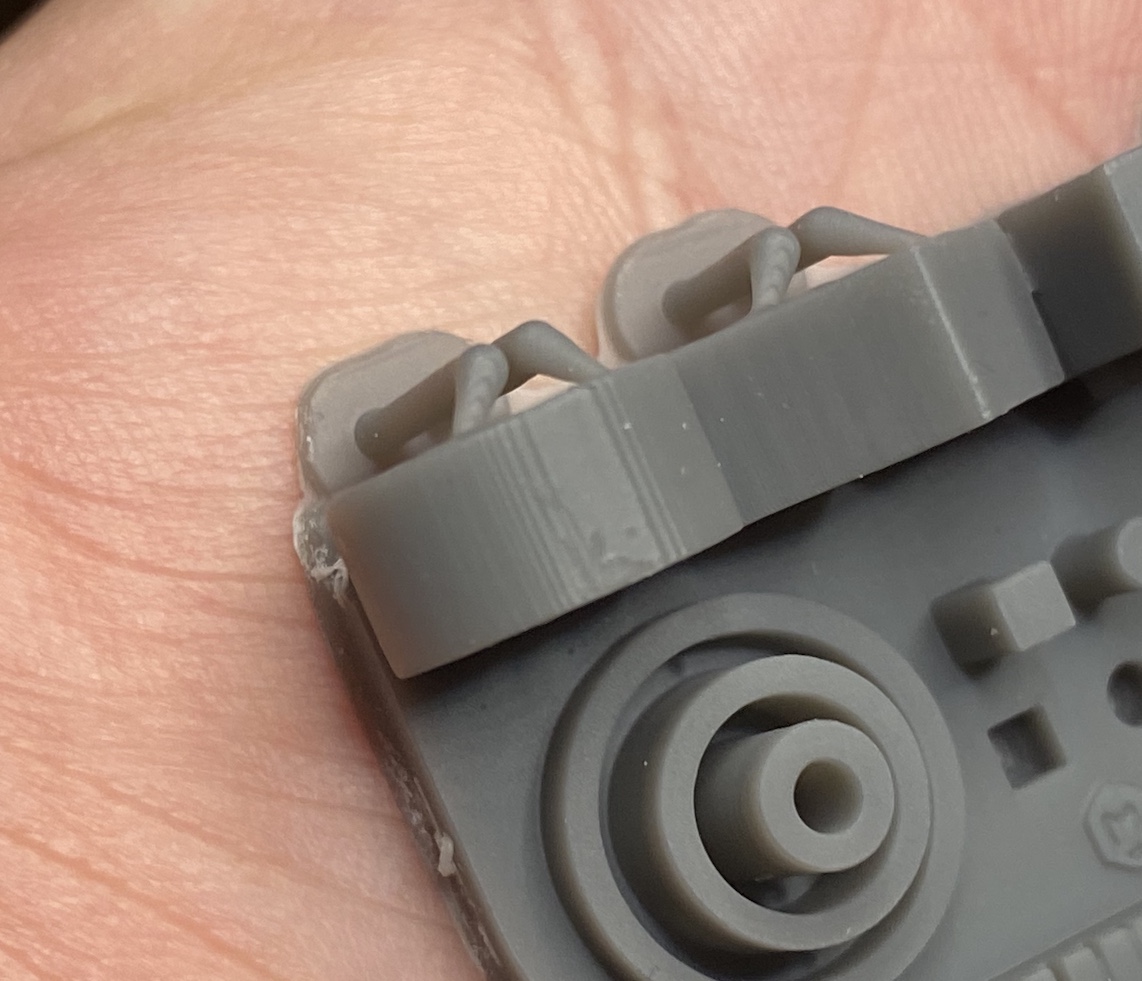 … but that might be due to me not being very gentle with removing the print off the platform (it was printed directly on the platform).

Another interesting thing is the first layers compression seems more intense now than before, at least when printing on the platform - there’s some elephant-footing happening there now, and it sticks to the platform way harder than before.

Dimensionality is good on larger features (e.g. diameter of the innermost hollow cylinder is spot on), but is slightly worse than before on small features. For example, the bigger square extrusion measures 2.05mm where it used to be a perfect 2.00mm before.

All of this is, of course, regarding the 100um print - the 160um “draft” one is obviously not very representative of anything.

Very similar, but…
Pre update i had gaps between the features in the rear, now they’re partially bridged.
Pre update the holes and other negative features (look at the text) were sharper.
Corners in general seem less sharp than before.

Curiously, the slits are about the same or a little better post 3.2.1.

The differences are relatively subtle, though, so might be just down to variation from print to print.

Hi I used your part to compare our Form 3 and Form 2 printer and it confirmed my suspicion that our Form 3 is overbuilding. Has anyone had a similar problem or have we got a faulty printer?

The holes inside the bullseye are non existent on the Form3 and the square hole is very rounded. Moreover between the rings of the bullseye there are thin ribs.

It seems like gray and clear are the best bet at the moment, with black and white being the worst, for dimensional accuracy and “bridging” of features.

Interesting thing to note is that in a lot of cases it’s not that the dimensions are off completely, rather, smaller features get bridged or close up, as if there’s too much laser spill overcuring the resin in smaller gaps.

I’ve printed a part last night that had an M12 thread on one end, and two M3 holes on the other (in grey resin, at 100um) - M3 holes turned out spot on, while the M12 thread was useless, despite the edges of threads being sharp as a knife, because the negative spaces of threads were rounded off and “filled in too much” so to speak.

At the same time, most “positive” corners are wicked sharp, but sometimes, you’ll get one that’s oddly not.

Printing the part in clear it did come out better than white but it still wasn’t as good as the Form 2. Has anyone actually had better prints using the Form 3 in terms of dimensional accuracy and crispness of features than the Form 2?

Interesting thing to note is that in a lot of cases it’s not that the dimensions are off completely, rather, smaller features get bridged or close up, as if there’s too much laser spill overcuring the resin in smaller gaps.

Sounds like the issue I am having printing small detailed models in Gray. They look great on the sides away from the platform/supports but on the support side is very poor. It looks as if the details are all there and then someone splashed a bunch of extra resin on top of the details so they are all “washed out.”