Yeah I didn’t realize just how much resin it would take until I printed it out. I suspect hollowing it would save the bulk of it. It’s recommended in an official Formlabs Whitepaper.

I use the Form Wash for 10m on my parts which I’d think gives it a pretty thorough rinse btw, so not sure that would explain the results. I have definitely found that a thorough wash is far more important than a thorough post-cure for part quality.

I usually do 15m for smaller parts, up to 20m for larger, although with not-exactly-fresh IPA that i’ve also recycled once already. I also do a manual bottle-rinse before and after.

For larger parts or parts with lots of cavities i sometimes do an additional rinse with an airbrush filled with IPA.

Interesting thing to note is that prints out of Form 3 practically don’t need a post-cure after a wash and a good drying. At least with the gray resin. This seems like a good indicator there’s some overexposure going on there…

Sent a hollowed out hole part to print.
Says 4h14m, it’s now 1am, we’ll see how this goes…

All positive features i’ve checked measure as they should / dead on.

Interesting! That’s quite a different result than the caliper photos here seen here (which IIRC is off by 3-10%):

jbrownson, Thanks for printing the same model on yours. Now, I see I am not alone on this ship…

In case it’s at all helpful to you, here’s the very first part I designed and printed on my Form 1, ShaftTest.zip:

Thanks for doing all this testing - keep up the good work!

Interesting! That’s quite a different result than the caliper photos here seen here (which IIRC is off by 3-10%)

That’s white resin, though.
For what it’s worth, i’ve had overcuring issues, filled up holes, etc. with white on Form2 as well:

Has anyone experienced odd overcuring issues with the white resin? It was fine three prints ago, now suddenly, negative features are ending up very noticably overcured. For example, a 1mm dia hole oriented about 45 degrees to the tank plane, is ending up as an indent rather than a through hole. The only thing that changed in between prints is that the parts that appear overcured are very near the farthest extreme of the tank from the peel pivot. I’m also using almost the whole volume of the F…

In case it’s at all helpful to you, here’s the very first part I designed and printed on my Form 1, ShaftTest.zip

Thanks, will give it a spin!

My fault, i left the touch point size at 0.3mm from a previous print and forgot to change it. The test object just cleanly ripped off the supports during the print.

Gonna clean things up and redo.
By the way, it looks from the design the object was designed to be printed directly on the platform, but i can’t see how that would work (or at least work well) as that will create a huge ass suction cup.

It needs to either be slanted, or there have to be holes punched out the sides (like the ones the raft has).

Alright, here it is: 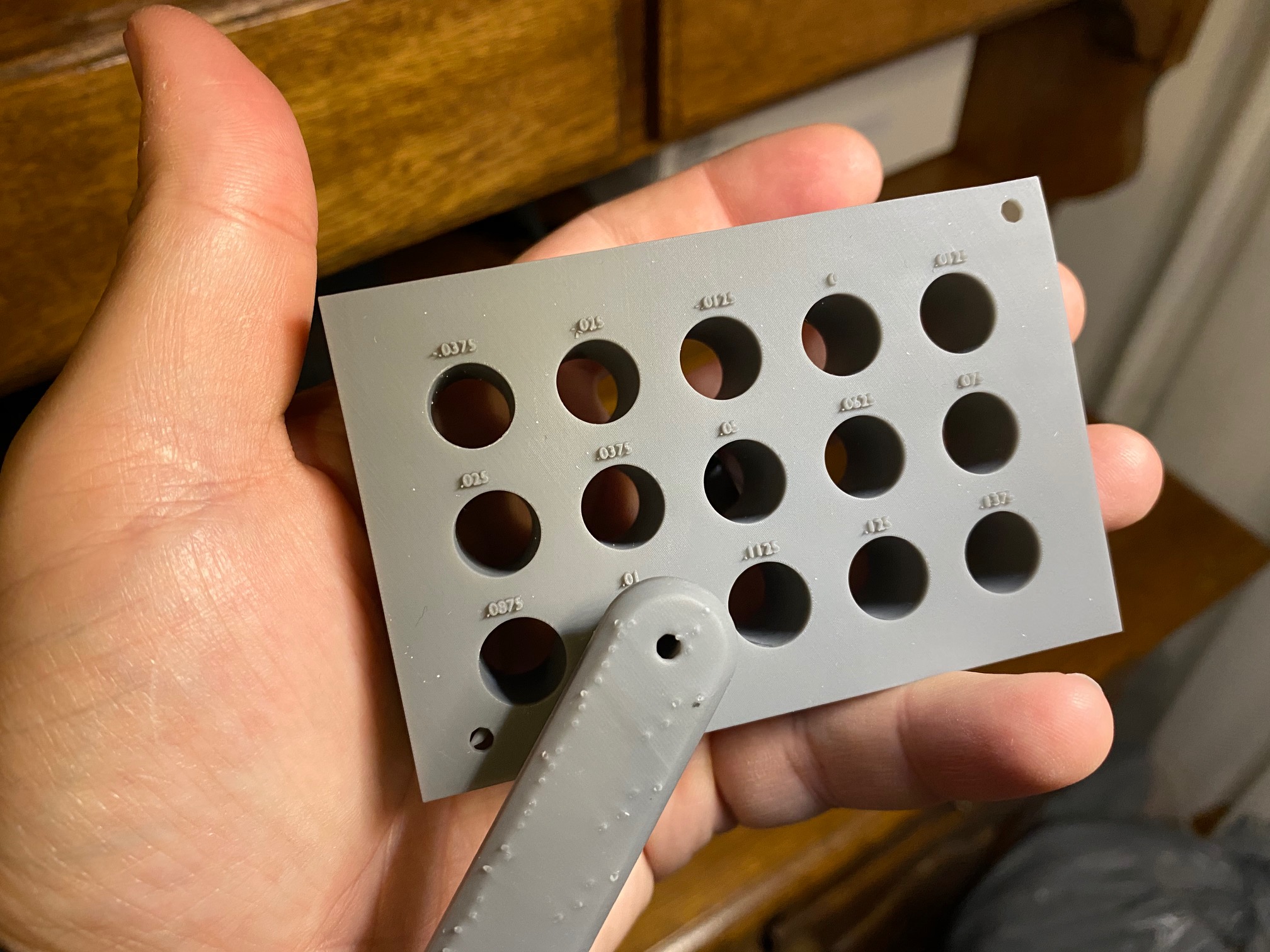 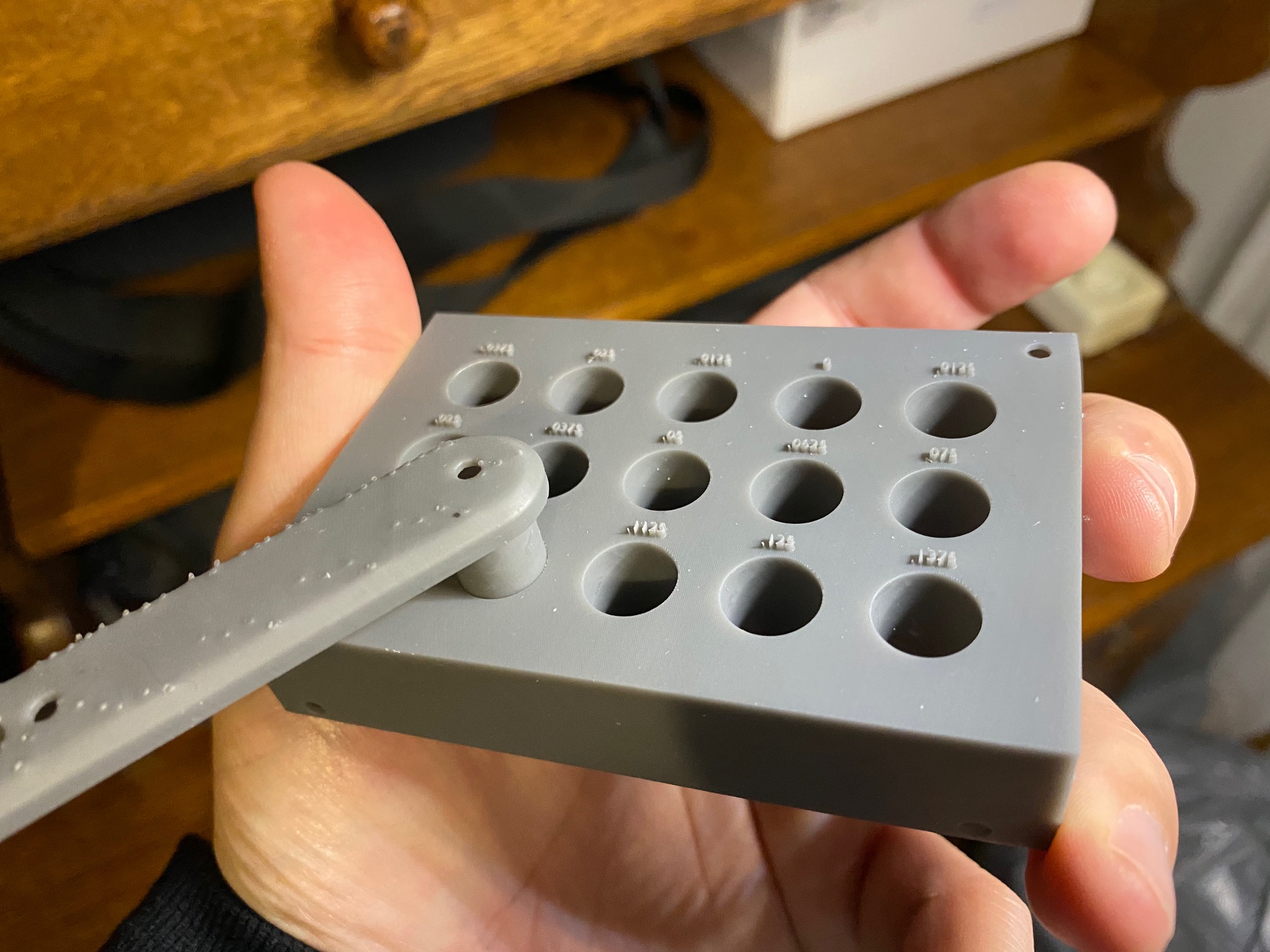 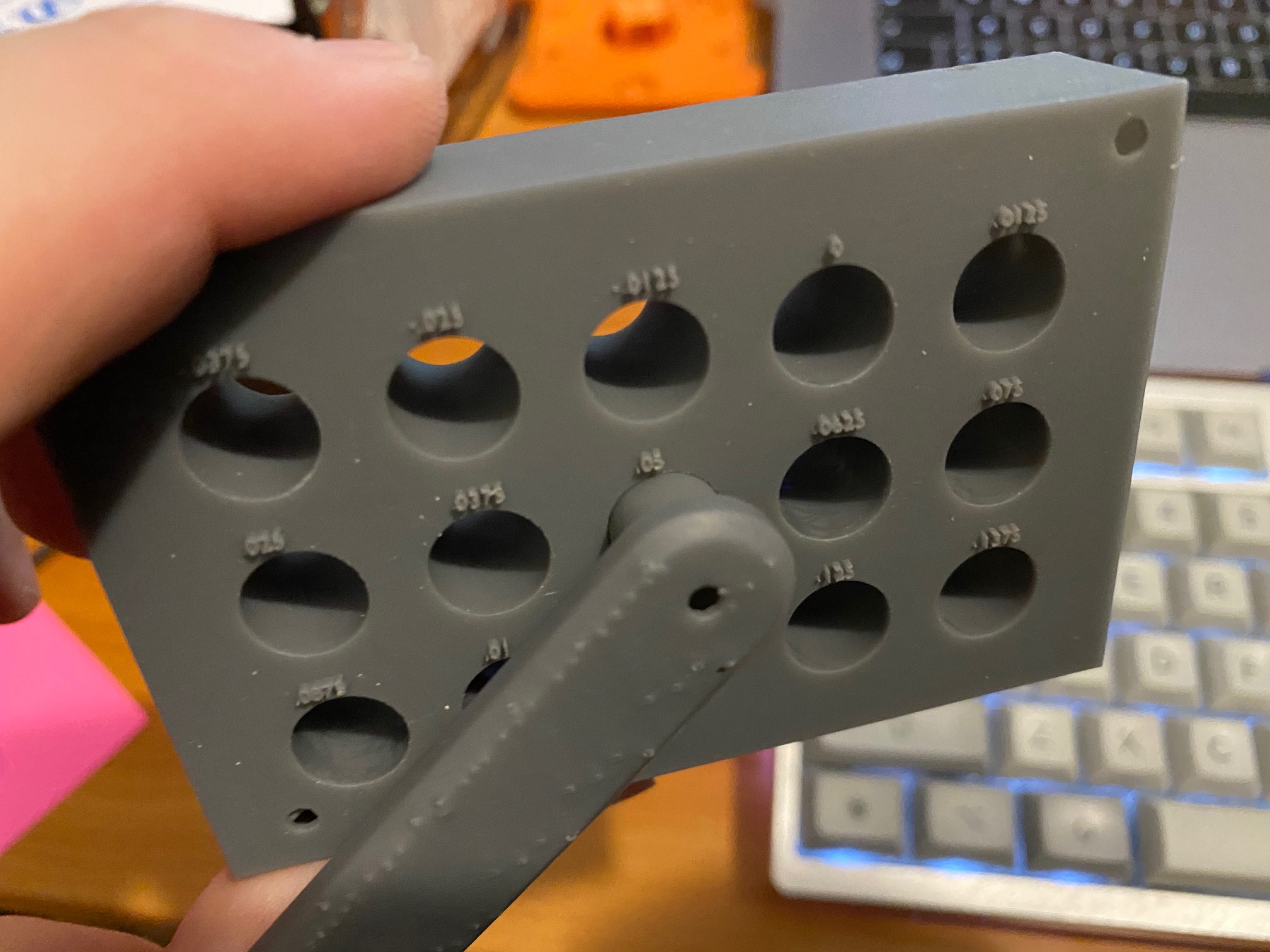 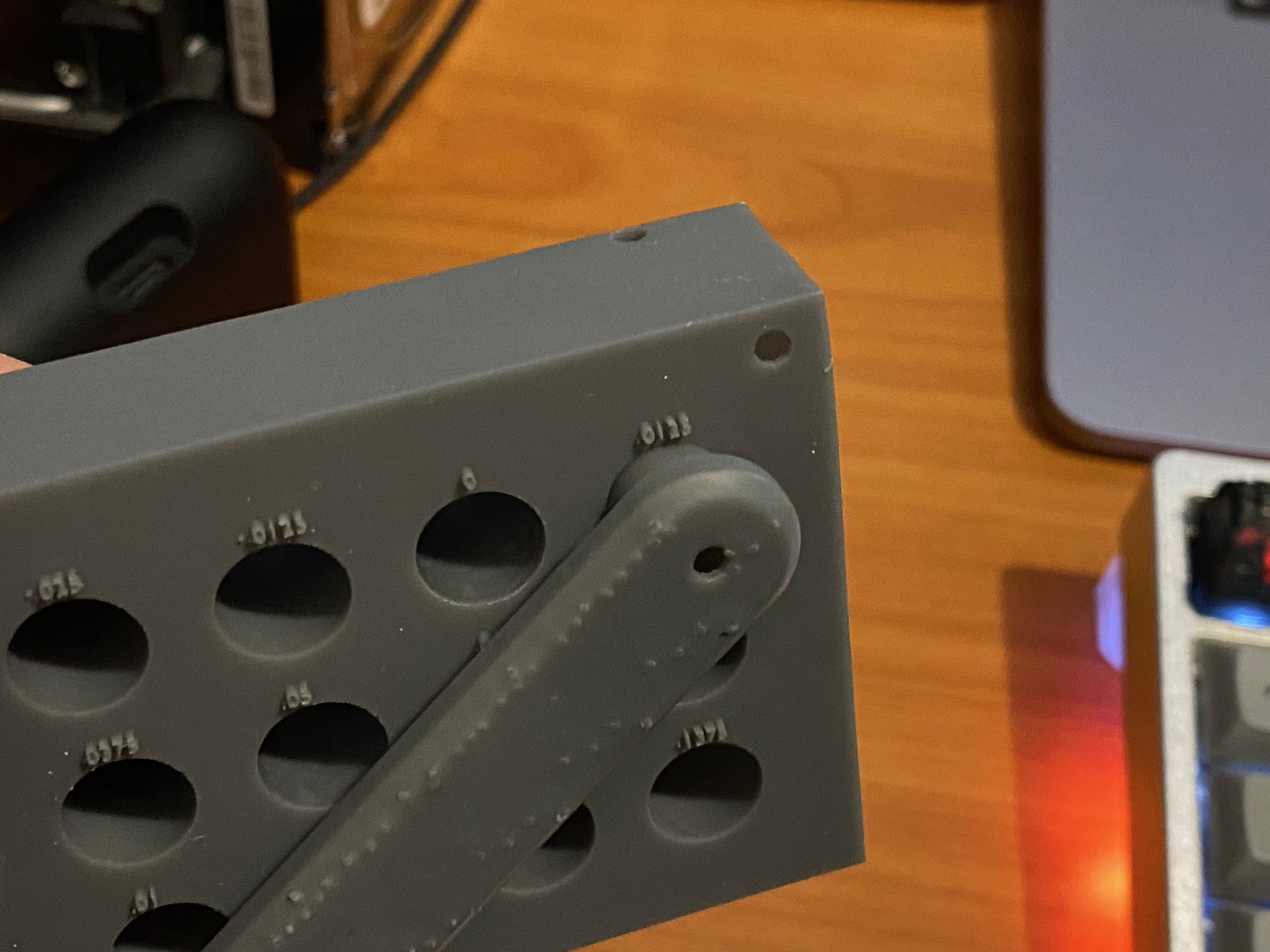 Here is the castle print done at 0.05mm on a Photon printer. I think the detail is a lot sharper than the Form 3.

The model is hollow, w/1.2mm walls. Since it was printed in translucent green, I primed it, to bring out the details.

At what size? Detail without size doesn’t tell much.
Mine was printed at 3cm tall.

Yeah, mine is definitely bigger, the total height is 2.67" (68mm). I didn’t realize you printed that small. I originally used one of your photos as a reference, and I came up to about 50-55mm, in reference to your hand.

The reason I printed mine at 68mm, it’s because that’s what it comes up to when you scale it down to 15% of the original size.

Still, even so, looks sharper.
And i’m not talking about resolution or minimum positive feature size either - there’s plenty of sharp edges on Form 3 prints, and dimensionality obviously isn’t that big of a problem. It’s almost like the pathing algorithm is doing some kind of “crowning” and softening the features.

No idea if PreForm does something like that, or what it’s called internally, but some slicers will “bridge” very high frequency details, in order to reduce the vibration, optimize paths, etc. On some this is fixed, and will get worse the smaller the print / the higher the (spatial) frequency of the details, and on some this is adjustable.

I don’t think ChiTu Box needs to do that. Since this is an MSLA printer, each slice is nothing more than a photo mask, not a “tool” path.

But you could be right, Preform might have some algorithms that look at the minimum feature size, and if it goes below a certain threshold, it might merge it with something adjacent to it, or ignore it altgether.

One of the things I was playing with on the Photon the other day was the exposure time. The shorter the exposure, the higher the detail, however, you also get to a point where some of the very fine details disappear altogether. I printed a couple of space marines that looked fantastic, but the exposure was so low, that the support tips were to small to survive the peel forces, and in some places they came off, and some parts didn’t print (technically they printed but became detached so I ended up with a blob of resin in the vat).

I wonder how long until FL releases an Open Mode for the F3, so that people can try fooling around with the exposure/laser power.

Ugh. This was the main impediment I had attempting mechanical parts on my original Form 1 - round holes that came out as slight ovals. I know there are tricks to engineer around it, and no technology today short of subtractive machining will get you perfect results, I’d just hoped the tolerances had gotten still better.

I realize this is a bulky print but any chance you could try it in the same orientation on a Form 2 for comparison? (Or link to someone who already did that?)

You need to support the print really well to avoid deformation.
The box i printed above was supported with the bare minimum of supports (and also had a fairly thin shell). It’s pretty much the worst possible scenario - hollow, huge, fully enclosed box, with thin walls, and minimum support.

I printed out your test object, but unfortunately, one of the items fell off the (built in) supports.
The cylinder with the text that says “6mm bore” sheared cleanly off its supports and caked on the film.

The print itself is in the Wash right now, and i’m trying to figure out a way to fish the little cakelet out of the vat. I dislodged it, but it was tiny enough that it immediately floated off somewhere and i couldn’t find it by feel anymore. I even tried probing around with my fingers (in a glove), but couldn’t feel it anywhere.

I really don’t feel like emptying out the whole vat now, so might do some more tests as is and hope the mixer will keep it out of the way…

4.5mm broke off while i was trying to get the cylinder off even though it was rocking, 4.75mm and onwards seem fused. I had a really hard time getting the resin out of those, and i think that’s part of the problem.

That said, i could fit one of the removed cylinders onto the 4.5mm pillar loosely, and it went onto the 4.75mm without too much force after wetting the pillar: 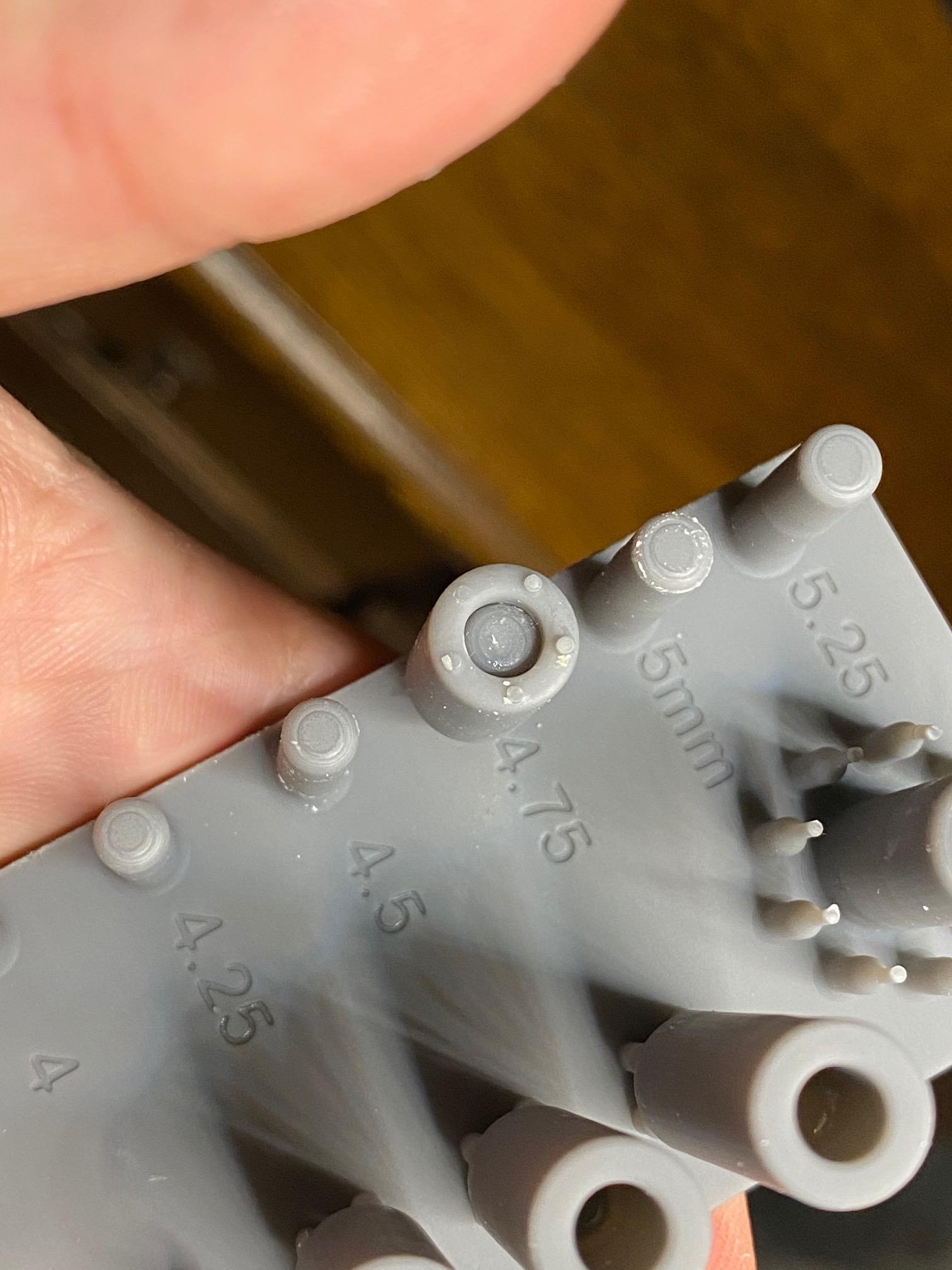 Since the next one is 5mm, and the inner diameter of the cylinders is 5mm, i’d say that’s an okay result.