Hello, so I’m getting some shearing / splits in my model and I’m not sure why. The areas where it’s splitting aren’t particularly thin and there weren’t any warnings in preform with regard to the support setup so I’m not sure what could be causing this.

This was printed using the Grey V4 resin. Any ideas or suggestions? 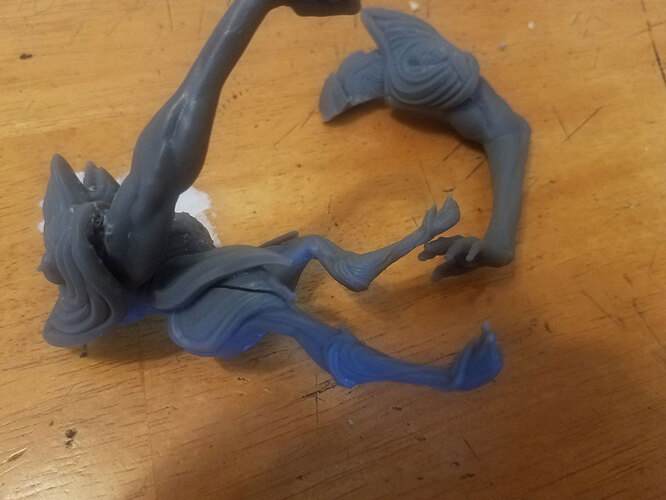 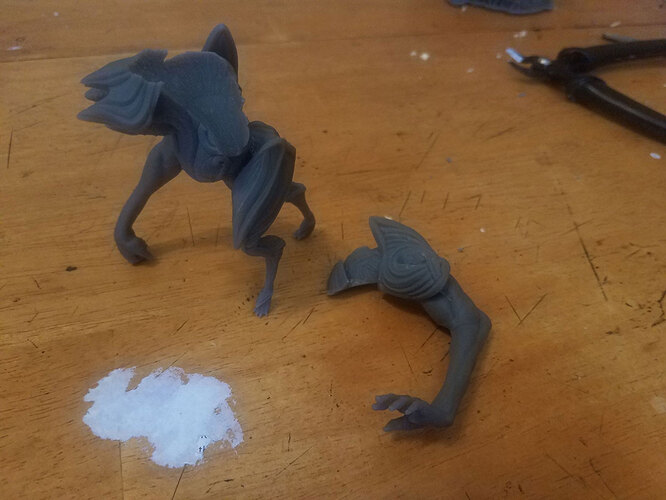 The root cause I would tend to ascribe to the massive solid nature of the areas that fractured.

Post curing resin that has pigments means that the UV can not penetrate very deeply.
As the part is built the laser polymerizes each layer and each layer WANTS to shrink toward its cross sectional centroid. This creates large internal stresses in the part.

in post cure, Whether in an oven or just sunlight, the depth to which the UV light penetrates causes additional polymerization, and the outside wants to shrink some more… this is prevented by the interior being unable to further shrink,… and so a split starts on the exterior. and because of internal stresses propagates thru the volume.

You see similar fracturing in casting compounded resins like Polyester… where the exotherm causes the center to harden before the exterior is even gelled, and so the gelling exterior- with nowhere to shrink to, splits.

Try printing this same part in clear…which can better post cure, and actually cures better under the laser.

But what I would do is hollow out this part. Print it in two or more pieces that can be assembled post printing.

PS- keep in mind that the higher the volume of material, the more dramatic the forces created by shrinkage.
Its why you never see injection molded parts that are not pretty dang uniform in thickness.

I have seen stainless steel and cast iron split like this because the person who made the mold did not understand how the metal contracts as it cools.

To give you an idea- let me explain how appraisers can tell an original casting from a recast.

Let’s say you cast a figure 8" tall in solid resin-( or metal- whatever ) For the sake of clairty let’s say the mateiral you cast it in shrinks 10%.
the wrist is 1/4 of an inch thick… 10% shrinkage in that thickness is going to be 25 thousandths of an inch- barely perceptible.
But the torso of the figure is 2 inches thick… and 10 percent of that is a Fifth of an Inch!..
if you then took a mold from that casting and cast a second generation figure… the shrinkage would compound- far more noticable in the areas that are thick, than in the areas that are thin… the figure with each generation loses visual mass out of proportion…
This is called attenuation. a robust looking superhero ends up looking like Jack Skellington.

We don’t just make big prints thin walled to save resin.
We do it to reduce the shrinkage and to keep internal stresses uniform thru the entire part.

Hello there! Thanks so much for taking the time to post! There are a couple things that can cause large-scale cracking like this, but by far the most common culprit is simply insufficient supports.

I would start by beefing up support density and maybe touch-point size as well to see if that improves things.

Other folks above me in this thread have asked some really great questions, chiefly whether this cracking happens during the printing process or during the post-curing steps. These are good avenues to investigate, but as I said, I would start by just boosting your supports a little bit to see if that helps.

Yeah, it’s usually an issue with your supports, the layers can move a bit if there’s not enough supports which makes things misalign.