Is the Form 2 better than the Form 1+ for dependability?

This question is aimed at users who originally had a Form 1+ and then moved to the Form 2.

If had fairly good dependability with my Form 1+ until replacing the small mirror. Now I seem to be in “never neverland”. So I’m contemplating moving to a Form 2 or just dropping the FormLab printers and going with Shapeways. After spending money to constantly try and get the unit running properly I possibly could just buy stuff I know will print or won’t get charged if it doesn’t. I like the availability of my own 3D printer but as I use it in a commercial environment these issues aren’t helping at all.

The Form 2 doesn’t have a small mirror, so you’d never need to worry about replacing it

On a more serious note, there are several features in the Form 2 that I would argue make it more dependable than the Form 1+. The resin cartridge and automatic dispensing ensures that your tank never runs dry or overflows. The heater and wiper ensure resin temperature consistency and uniformity, leading to more predictable curing properties, thus more consistent parts. The Form 2’s sliding peel mechanism (as opposed to the tilting peel mechanism in the Form 1+) creates more uniform forces throughout the part during the peel. Don’t get me wrong, we used the Form 1+ to prototype the Form 2 and it served as a “reliable beast”, but several new features in the Form 2 make it more dependable in my consideration.

I don’t think the issue Walter is talking is only regarding the small mirror. Mirror replacement is a necessary evil with the Form 1 / 1+ not having sealed optics. Cleaning them with IPA never seemed to resolve any of my issues. IF I needed to use IPA, the mirrors needed to be replaced. A dusting now and again is a must.

Don’t get me wrong. I love my printer but I have been frustrated lately. Very frustrated.

Well, Craig, your speaking from the manufacturing side. I’d like to hear from some owners who also had a Form 1 or 1+ before moving to the Form 2. As I stated, I’m not using if for fun. I print master pieces mainly that are then used for making RTV molds for production parts. I’ve had fairly good luck until the mirror issues. As my business is ramping up I need to make some serious decision on this. For a lot of my castings the FormLabs printers are not the answer and we do production through Shapeways. On still others we do a limited production on shapeways and use those for masters for casting. I did away with my metal casting equipment and only do resin now. Most parts go into our building kits but some we sell separate.

I’ve had both and here’s my observations so far.

I’ve printed thin walled parts vertically for the entire build height and only had one failure (support related). By thin I’m talking 1mm thick and that would never fly with the Form 1+

Nothing against Shapeways but they aren’t worth it for a lot of things I do. I have ordered laser sintered parts when I needed something more functional and they’re good for that. They would also be good if you only needed a print or two a month and can wait a few days to get a part. 3D hubs is also an alternative.

Usually more moving parts the more can go wrong. That’s the rule i work by when making things.
I looked into the Form2 and I like the idea of the peal system which allows for larger peal areas with less chance of failure. What I didn’t like was the tank system because it can leak, can give false readings on volume left which may lead to overfill or under fill.
The heater idea is good, I have my Form1+ in my workshop which is a converted basement and it can get chilly down there which can lead to print failure or rough low angles on support sides that need extra cleanup.
I also love the idea of sealed optics.
If I had a choice at time of initial purchase I might get the Form2.
I think if they made a new base model and revised the Form1 and simply added a beefier laser and seal the optics it would make a really nice, simple dependable machine. If you look through all the support tickets on the Form1 you will probably notice that the leading cause to print failure (not counting user errors) is dust on the mirrors.

We have run the gamut, we started out with Form 1, upgraded to the + and now have 2 Form 2s. We still have the form 1+…but it is sitting in a box somewhere collecting dust.

That pretty much says it all…We had a problem with one of the Form 2s, but FormLabs replaced it and basically the Form 2s are simple to use and worry free.

Thanks for the feed back. This is what I’m looking for.

I work in scale at ratios of 1:87, 1:64 and 1:48. The Form 1+ can handle the 1:48 scale ratio OK to a point. But the 1:87 is a big issue and where the majority of my printing is done. Thus the reason for using Shapeways. I have a designer in South Carolina that does most of my Shapeway stuff. Example is the attached photo of a 1:87 row boat with oars. There is no way the Form 1+ or Form 2 could do this fine a work at this scale. 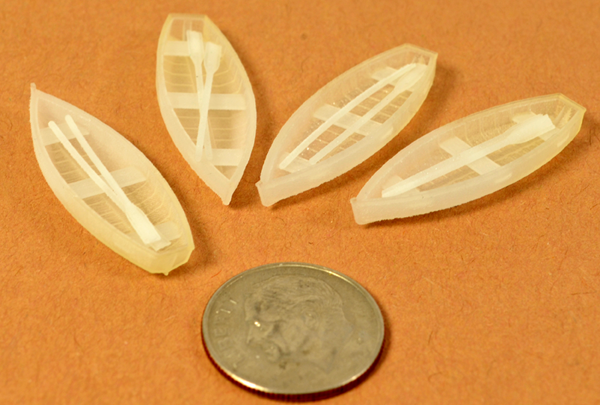 I’ve had much more reliability with the Form2, haven’t had to do any cleaning and it still prints fine.

As for your boats example, it could print OK I think, but the bottom would lose detail since you would need to attach supports there.

The lack of quality and poor turnaround times from Shapeways is the reason I bought a Form1+. So far it has served me well. Maybe down the road I’ll get a Form2 or maybe the a Form3??

What kind of wall thickness do they have?
I print 0.3mm and some short 0.2mm walls without any problems(I’ve printed plant leaves and skulls of very tiny birds) on my Form2.

Maybe a daylight resin printer is suitable for this fine work. They exert much lower forces on parts during printing.

Hello Walter,
I have just finished filming most clips for my extensive testing and review on the Form 2.
I am out of town (once again) for a few months so my review, which I wasn’t able to finish and upload yet will have to wait a few months. But let me say this - as it’s in direct comparison to the form 1+, which I started disliking very much after a solid year of use, the Form2 is solid, not rock solid due to the base technology in the machines but it is by far superior to the Form 1+, in any aspect.
The Key is getting to terms with the machine’s limitations and counter those in pre-production. Small cross-sections are the key to success as long as we have the building platform hitting the tank surface.
I had the machine running for close to 400 hours almost non-stop and except for one failure, all other failures were typical pre-production mistakes (no supports on overhangs, walls too thin), the machine performed very well.
It still shows some layer shifts here and there but performed well at 25 microns building parts that used up the maximum size in one or two dimensions of the building area. Parts that ran 33+hours. The form 1+ never managed to build parts like those successfully. The form 2 is without any doubt a better machine.

OK, Jens, I’ll look for your review when you get back. That’s the type of info I’m in need of, thanks for your efforts on everyone’s behalf. I’m sure there are others out there asking close to the same question.

0.4mm is what he was using but bumped that up to 0.8mm because I’m going to use them for masters to cast in RTV molds. The cost per boat is too expensive on the O Scale 1:48 ratio sizes.

I’m printing much thinner and smaller objects than the boats with the Form 2. Unfortunately most are under an NDA but I can assure you that if you position well, the form 2 can handle it. Coin is 22,25 mm x 2,14 mm

One example below… Part is a bit dirty but printed correct the first time. It’s really small. 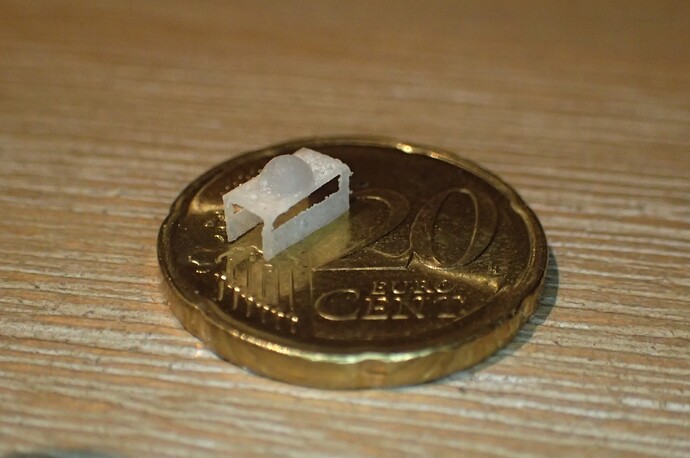 I just printed parts 1x2x5mm in the shape of a tuning fork, so very thin and tiny legs… no problem.

3 months of frustration and disappointment, without a single good print…and some of the stuff we tried printing was, to say the least, basic.

We’ve had the money for some time now to buy a Form 2 but my experience with the 1+ has soured me to the product/brand.

I still receive the plentiful emails and white papers from Formlabs, and the links to the (good) reviews, but much the same happened with the Form 1+. It is therefore very difficult to ascertain if the Form 2 is going to be worth the expenditure - especially in terms of time - to discover if it is truly improved or its just more PR blather…backed by a support system that refuses to acknowledge that there could ever be anything wrong with their product and it MUST be user error.

What Jens has posted sounds promising, but some more independent feedback would be helpful.

Consistency of print is highly desirable, the “we always print 6 to ensure we get 1 good one” is a big, fat failure in our eyes.

Similarly if the FormLabs Support attitude remains as “If you keep experimenting with it and trying printing in different areas of the plate, you will eventually get something to print” - then “adios muchachos”

We’re really not willing to spend another 3 months messing around with a Formlabs printer with the previous “Turn it on and you void the warranty” attitude.

It either works out of the box or its broke.

I was similarly disappointed with my form 1/1+, the form2 however is a different beast, 90%+ success rate, still the best desktop resin printer for the price imo.

I think the issue is that if they have to do returns or repairs for a printer it has a very high cost to them so they have an emphasis on trying to help the user fix the problem rather than sending it back. On the forums you’ll hear about people having issues but that doesn’t necessarily indicate a problem, it might just be the 5% failure rate.
For example with me, I had very good success with the Form 1+, only issue was dust. Moving to the Form 2 it is much improved but compared to the previous model the thing that benefited me most was the larger print volume. In my project a have a large part to print and with the Form 1+ I had to split it into 12 parts, with the Form 2 I only have to split it into 4 and that alone makes a big difference.

Hello Walter,
I finally got the review ready, even though it’s been some time I hope it still gives some insight, here is the link

I think I came across this video a few evenings ago doing a search on Form 2. Looks good but I’ll go back again and watch it closer.

I’ve already purchased and have installed my Form 2. Now just to sell the Form 1+. [moan]

The Form 2 is running real good. Some small issues with the Grey resin just lately. I’ll need to document those issues and submit a question here on the Forums.