How would you orient this model?

Hi,
I do not know the best way to print the linked model 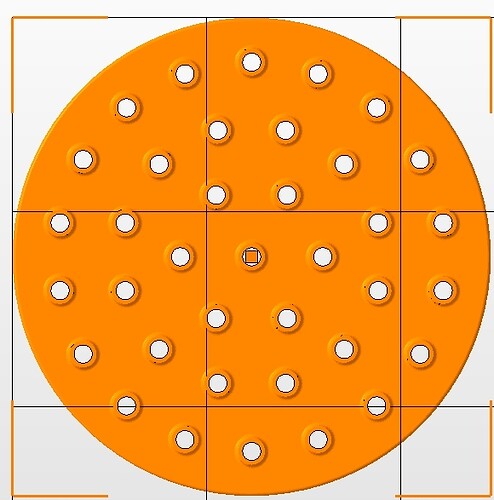 thank you very much

I usually let the software position it first. Then tweak it, if I need certain details to be support free.

I think if the size that you have this modeled at, which looks to be about 1 inch in diameter, PreForm will most likely not support all of the protrusions.A lot of my pieces are around this size. I agree with 10 degrees. Also, what is the thickness of the wall on the tubes?

I would also put the short end of the cylinders on the bottom, you’ll need maybe 2 supports on the bottom edge of each cylinder, once it starts printing the large part they will have more support there.

I think you should also increase the distance between the model and the base to make it easier to cut off the supports down there.

Make the support points small; set at 0.40 so that the cylinders don’t break when the support is clipped off.

I have found that there is distortion about 4-5mm from the build platform…it was mentioned in another thread, and I’ve experienced the issue, so you want to make sure that it’s lifted up enough to avoid that.

Has anyone experienced any distortion when orienting prints in a certain manner?

I would try to have no rotation at all, keeping the part parallel to the bed. This way you are ensured that the holes in the tubes are perfectly round.

I agree with the short end of the cylinders being on the bottom (closest to the bed). As indicated by @katkramer you want the part to be roughly 5mm off the bed. So I would put place the entire model on a platform with the same or slightly smaller diameter to the part. and then have supports on the outside edges.

I have experienced some distortion, most noticeably with square or rectangular pendants that are angled vertically. When I printed these, the angles were not 90°. I haven’t tried angling them the other way because of the protruding design…these are enamel frames that would have cells filled with transparent glass enamel and fired. 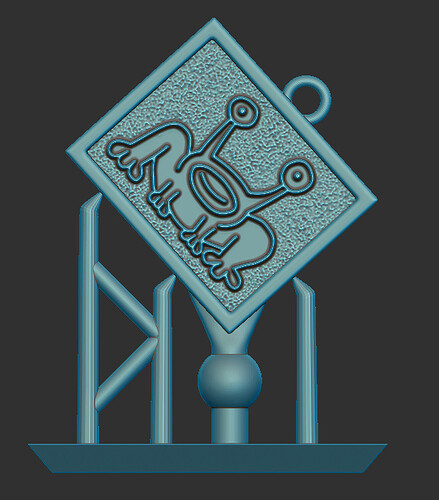 I quite like the way you have oriented that model. I think the only distortion you might face is with the jump ring (minimal but probable). I’d really love to see the part when you are done printing (and again after casting), I’ve not been able to print such intricate detail, such as the backing texture, and knowing how thin the walls are for enamelling I’m interested in how the frog cloisonné comes out in print. And I’m interested in the effects of the ball reservoir you have there (it was mentioned in another thread).

The thickness of your main sprue, and orientation of the whole part, makes me think that the support on the far left is unnecessary (and thus the scaffolding.) I remember your tutorial on supports and the points, (built in ZBrush). I too built my own supports (and use some of them as sprues) and my own bases. I find the supports that the software generates to be wasteful.

if you have an issue with the detail in the print I would suggest that you tilt the model a bit to the back, so the detail is ‘on the top side’. I do mean roughly 5º though, if not less. Then add a support to the back side, right where the ‘toe’ of the frog is, so that that section starts printing with some form of support to it, since you cant very well support it from the front side.

As far as the distortion discussion… I wouldn’t be concerned with any of the above models distorting. The only time I’ve seen gross model distortion, is with models that are very heavy. In these cases, it’s always an excess of cured material, near the support structures. In the casend of this model, even though there are a rediculous number of local minimums (no matter how you orient it), none of those structures are “hefty”… so you should be fine in regards to distortion. The supports will be well distributed. Distortion of the original model comes from a large volume part, and the subsequent (necessary) heavy support density. For some reason, the printed part “weeps” towards the support structure. I’ve seen it on a small handful of prints/models.

I totally understand that. You are correct in that regard, I’ve noticed only variable distortion in the parts, V1 castable doesn’t buckle under its own weight, it’s highly stable. Unlike what I have heard about the V2 castable, which allegedly requires more support to print the same part.

What I am specifically talking about is the orientation, for example:

86a61ba570b80bff51af431e7d64c6cc203a28ab.jpg319×652 26.2 KB
if the part were to be placed like this, (assuming the bed is at the bottom of the picture, parallel to the cylinders) one might experience variation in the wall thickness of the tubes, the sections being printed first (the bottom of the tubes) would be thinner than the ‘top’ side of the tubes, and with supports they might be thicker at the bottom than the original model. The lack of ‘drainage’ would also result in the holes being variable, resin stuck in the cavities would be cured by the laser. It would technically be a misprint, if we are being highly stringent about the tolerances.
SchemeInc February 9, 2017, 6:17pm #14

The 90-degree orientation may be troublesome. There are still many, many local minimums… and in this case, those minimums result in large unsupported surfaces/layers being printed.

wall thickness is 0.25mm
printing is fine, problem is when I retire supports,
now, I am orienting and applying for all the tricks from users 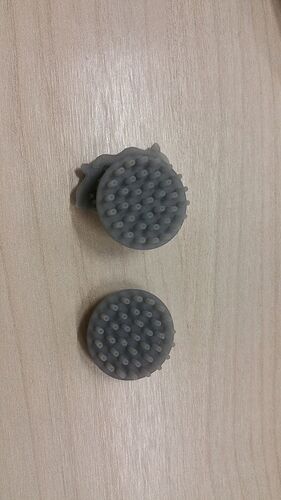 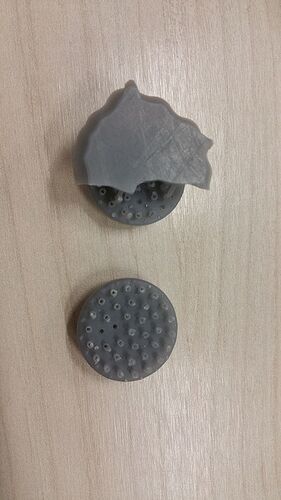 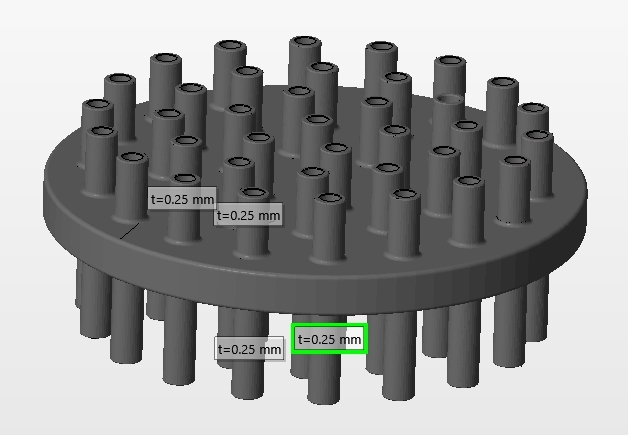 I would angle that at a 45 so it is almost upright but tweak it so the supports are easy to clean up. On edge might pose some problems with cleanup. Maybe the short posts down.

Attached is an image of a simple pin that I had made, The angle looks steep but the clear resin had no build lines and cleanup was easy, 2 sided objects I do the same but do in 2 parts then stick them together after. 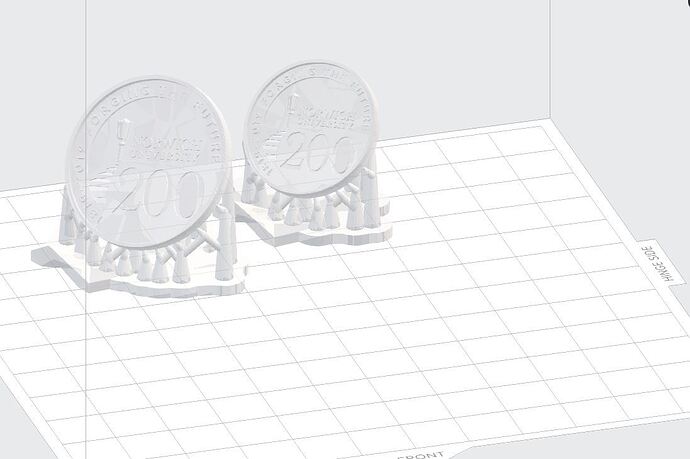 Hi,
finally the model was printed thank you to your advices:

and I have realised that I need to change resin tank 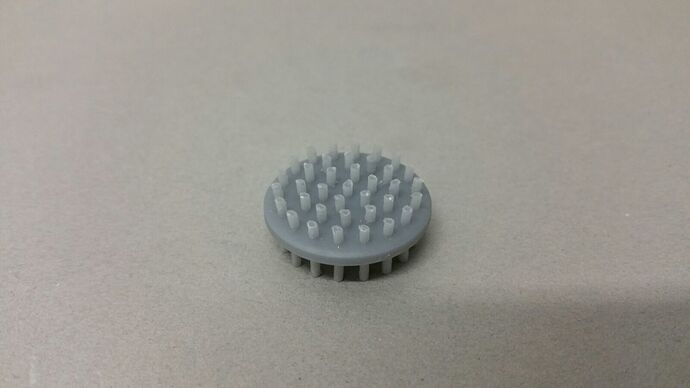 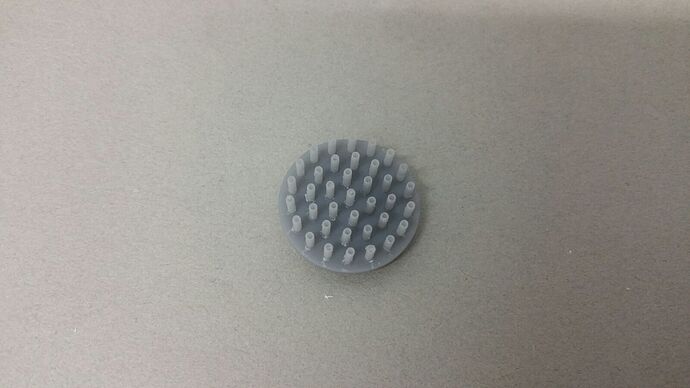 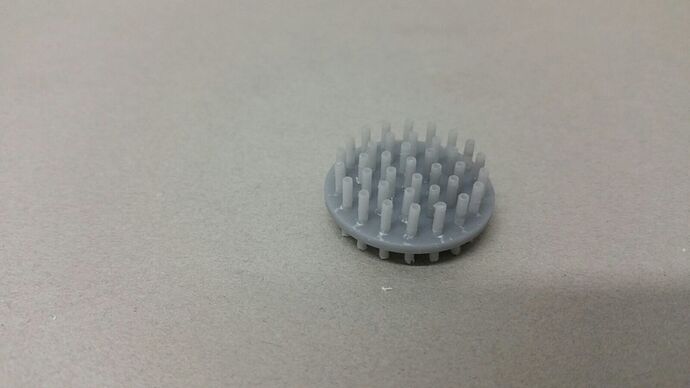 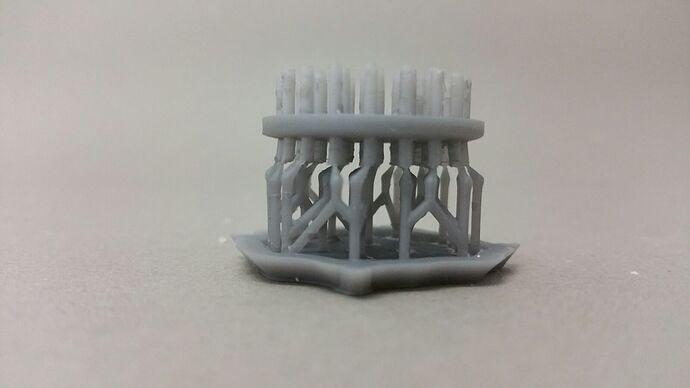 I might echo @KenCitron’s advice of orienting at a 45 degree angle. This will more evenly distribute forces and give you much cleaner surfaces on the bottom of the cylinders and the bottom of the part itself. It looks like you’re using Grey V2. Here’s a link to a .form file with the orientation I’d recommend: Dropbox Link