How far past "expired" will a resin tank still work?

I know I’m taking a chance here. The tank is sitting on the printer, and has been since I first installed it. I periodically pull the tank and inspect the underside for signs of leakage and have yet to see anything even remotely worrisome. It’s not like I’ve done a lot of prints, either. But I just completed my 23rd and it printed as good as every other print I’ve printed. This resin tank is clearly not expired. 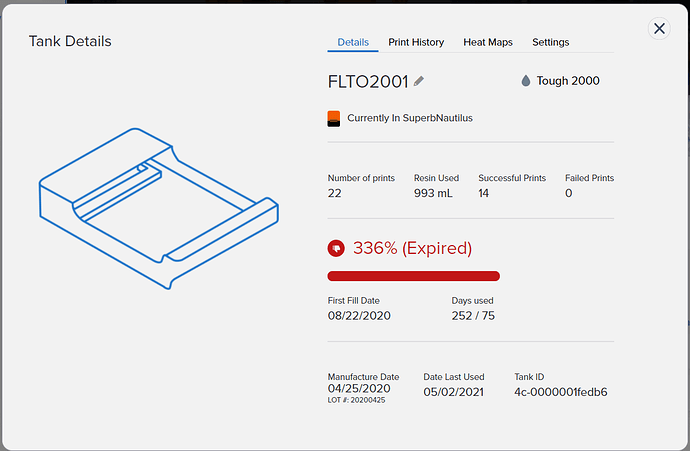 With regular grey and clear resins, I am able to re-use the same tanks over and over again. The printers have actually even stopped complaining about the tanks being expired after one of the latest firmware updates. With Grey Pro, on the other hand, the tank leaked right after the warning that it is near the end of its life. That was a nasty experience.

Chances are you already have read this one but here we go: Pouring resin out to extend tank lifetime?

After having to clean two Form 2s after a resin spill I’m not taking any chances yet on a broken Form 3 tank, so I’m swapping them when they expire. Your accomplishment is motivating to push the boundaries of the tank’s lifetime though…

Well, print #23 completed perfectly. So the tank still hasn’t “worn out” yet.

I think as long as the underside of the tank looks fine (specifically the gasketed perimeter), you’re fine. The only caveat being that maybe if you are going to attempt a huge print with really large cross sectional areas, that might make me think twice.

With Grey Pro, on the other hand, the tank leaked right after the warning that it is near the end of its life. That was a nasty experience.

Ouch, sorry to hear that.

Can you share a little more detail about the failure and the experience? e.g. Could you tell where it leaked from, and was it the black gasketed area? How bad was the coverage? Did the printer realize anything was wrong or did the LPU’s keep going back and forth and get smeared in resin? Any get in the lead screws? Were you able to clean it up yourself and what kind of replacement components were required?

I think the longevity of a tank beyond the recommended limits depend largely on the mode of use. If a tank is idle most of the time and reaches it’s “useful life” based on time is quite different than a tank that reached it’s limit from use. I haven’t had leaks but I’ll go beyond the 75 days but not the 200 use hours.

I’m also very interested in the details of these failures (how/when/consequences…etc). I think they would help us owners a lot.

I do appreciate the last update from Formlabs regarding tank life expectancy data. Regardless of that, these failures modes must be known to a greater extent than what is disclosed now (but I understand the complexity and risk of Formlabs committing to specs longer that)
Using tanks past its recommended lifetime is our own risk but we owe it to ourselves to share this data with everybody to calculate those risks. It’s obvious that if you can already use a tank 4x it’s life, it’s not exactly responsible throwing it away at 1x.

Well, the printer haven’t ‘noticed’ anything and I think I did one or two prints without realizing what was happening. Earlier I took apart a used tank and the bottom of it is a sheet of plastic folded together in such a way so that it creates three layers. When looking at the printer while it was preparing to print a job I have noticed spots on the surface of the tank that looked like water trapped between 2 plastic sheets. The resin leaked through the edge of the tank between the sheets and the side of the tank that is closer to the Z-leadscrew. It went through the hole in the bottom of the tank, where the fan is, then further down and created a pool of resin on the desk behind the printer. It also got on the roller assembly that covers the LPU and on the horizontal lead screw. I had to take off the back cover from the printer to clean it from inside. After cleaning the resin off the parts the best I could and replacing the roller assembly, then cleaning and lubricating the horizontal leadscrew I was able to print again, with no issues. I have used a ton of cotton swabs and there is still some resin left inside. I was not able to take the printer apart further to remove the leftovers of the resin. I have been told by Formlabs that it cannot be disassembled further without a major recalibration later.

Thanks for that info.

I wish Formlabs would integrate a “leak detection” algorithm to help stop leaks before they become catastrophic, and have posted a feature request here.

Thank you for submitting that feature request, we truly do appreciate and take these posts into consideration. Although I am no engineer myself, I would say that this does seem like a difficult system to implement. I would say that Konstantin had some helpful information above (regarding the “spots on the surface of the tank that looked like water trapped between 2 plastic sheets”) as there are oftentimes early warning signs like this. Checking the tank film periodically will help you detect when the film is failing, along with the tank lifetime monitor built into the printer’s User Interface.